Makgeolli, that cloudy Korean rice wine is well-loved for its sweet-sour tanginess. It’s an integral part of Korean dining culture, with it’s own pantheon of historical breweries where techniques and terroir take centre stage.

So where does a traveler start? Here, we get Makgeolli School and Bar & Dining Magazine to list of 11 of the best makgeolli and food pairings to experience in Seoul. 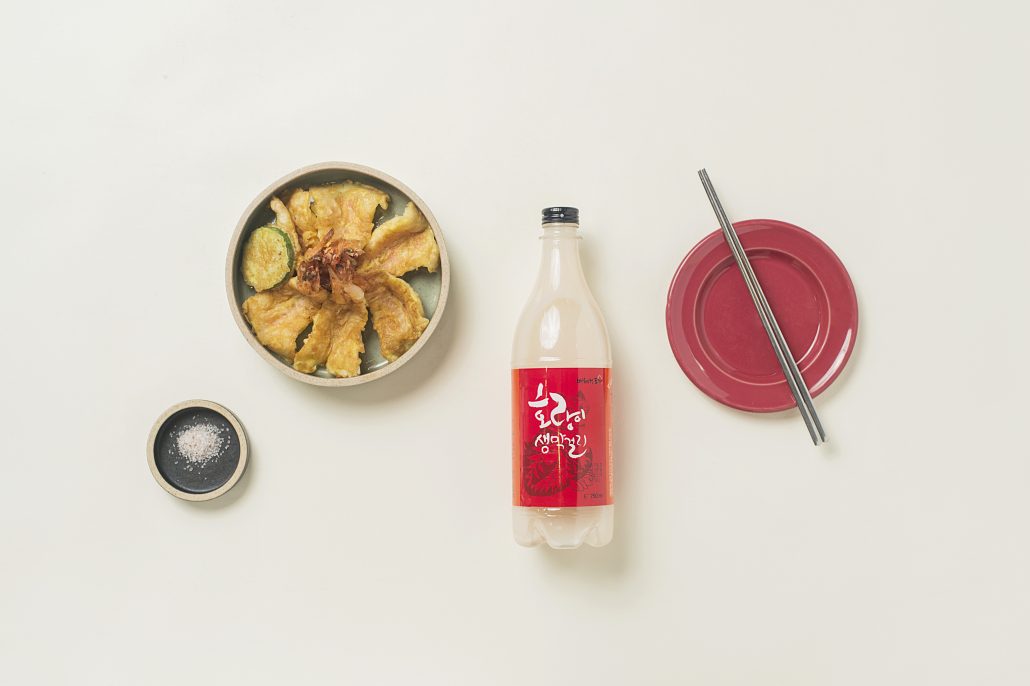 Prawn jeon with Unpasteurized Tiger Makgeolli (BHD Brewery)
A combination of lightly battered pan-fried prawn jeon and pink dipping salt is paired with BHD Brewery’s Unpasteurized Tiger Makgeolli, a flavourful and fragrant makgeolli made from fermented raw rice. The faint bitterness and subtle sweetness of the makgeolli effectively cuts through the richness and fattiness of the prawns while cleansing the mouth and preparing it for the next bite. Oh! Tongyeong (Gangnam-gu Seolleung-ro 158-gil 10, B2)
Advertisement
Advertisement 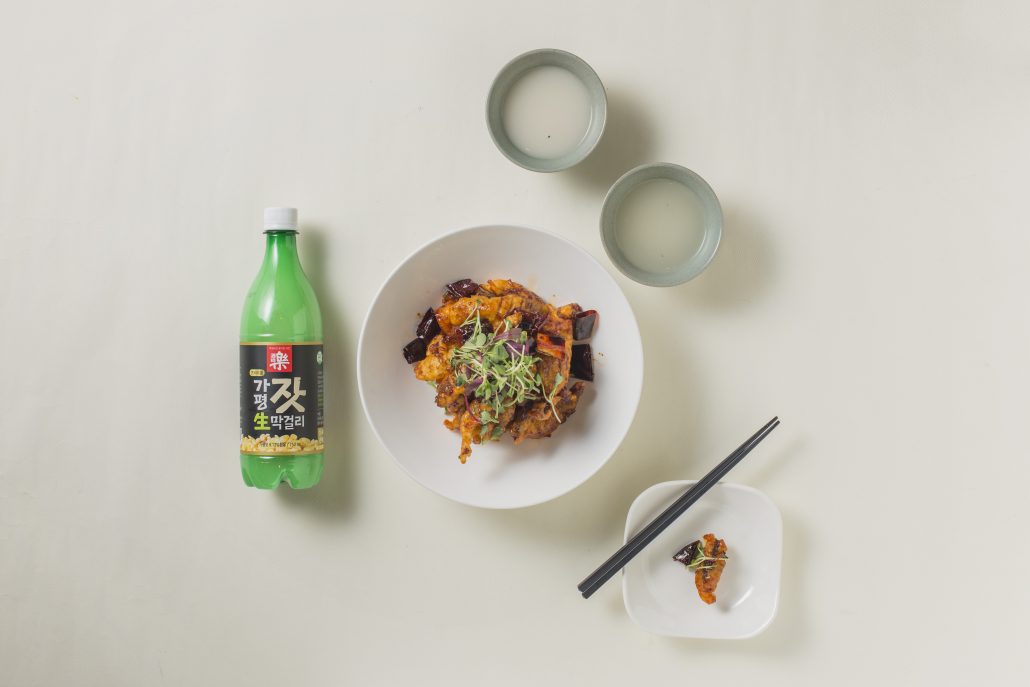 Crispy beef with chili garlic sauce with Gapyeong Pine Makgeolli (Woorisool Brewery)
This sweet and spicy dish is prepared by marinating tender strips of beef tenderloin in garlic, oyster sauce and sesame oil which are then coated in a mixture of cornstarch and sweet rice flour before being fried to a crisp. The deep-fried beef nuggets are then tossed with chili oil, garlic and dried red chili peppers before being glazed with sweetened soy sauce. With its elegant nuttiness, Gapyeong Pine Nut Makgeolli -- a smooth and easy-to-drink makgeolli made with newly-harvested local rice and local pine nuts. is the perfect foil for this vibrant Chinese-inspired dish.Subul (Jongno-gu Saemunan-ro 5-gil 31).

SEE ALSO: First Day I Got My Michelin Stars: Jungsik Yim of Jungsik 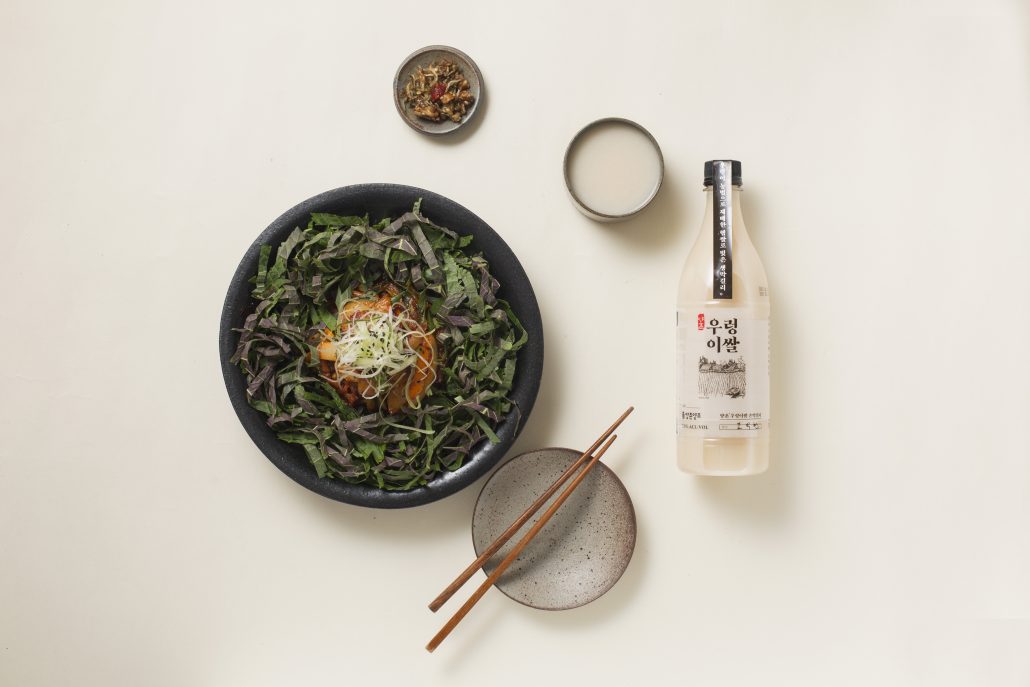 Spicy stir-fried gochujang pork belly with fresh perilla leaves with Freshwater Snail Rice Makgeolli (Yangchon Brewery)
There is perhaps no other local vegetable that complements pork quite like perilla leaf does. The grassiness of the perilla leaf cuts through the fatty pork belly, leaving the mouth fresh with hints of mint, basil and anise. Sweetened with green plum syrup, the gochujang marinade adds a pleasant kick to each bite of the rich pork meat. The dish is paired with low temperature-brewed Freshwater Snail Rice Makgeolli that has a complex depth of flavor and exquisite smoothness with an unmistakable hint of apples. It is made with newly harvested rice from Nonsan, cultivated organically through the snail farming method. Bokdeokbang (Mapo-gu Poeun-ro 8-gil 5). 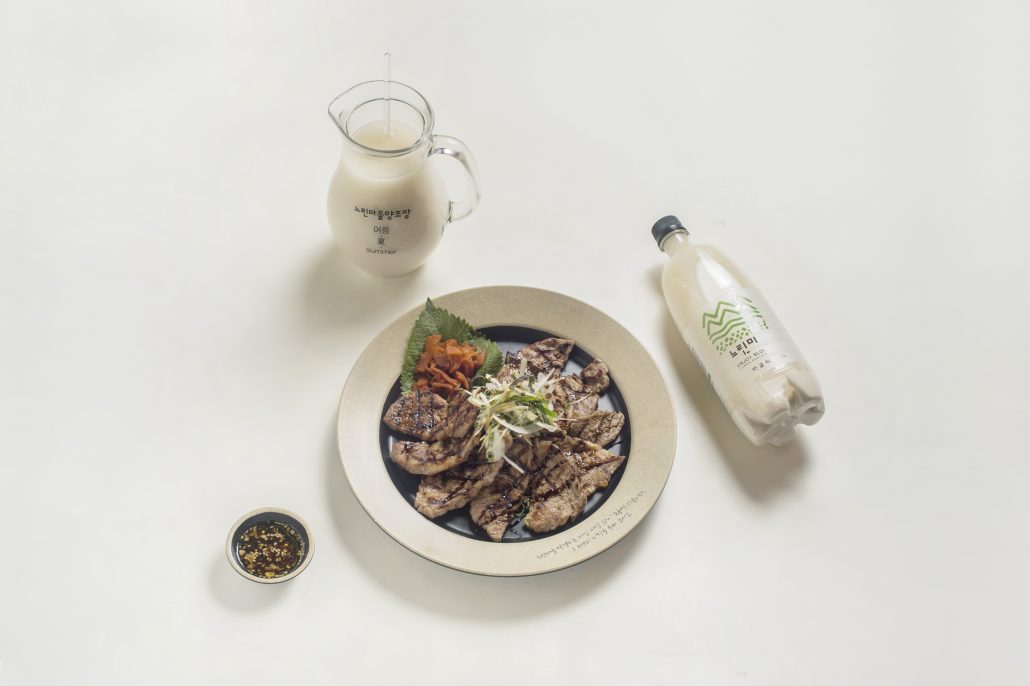 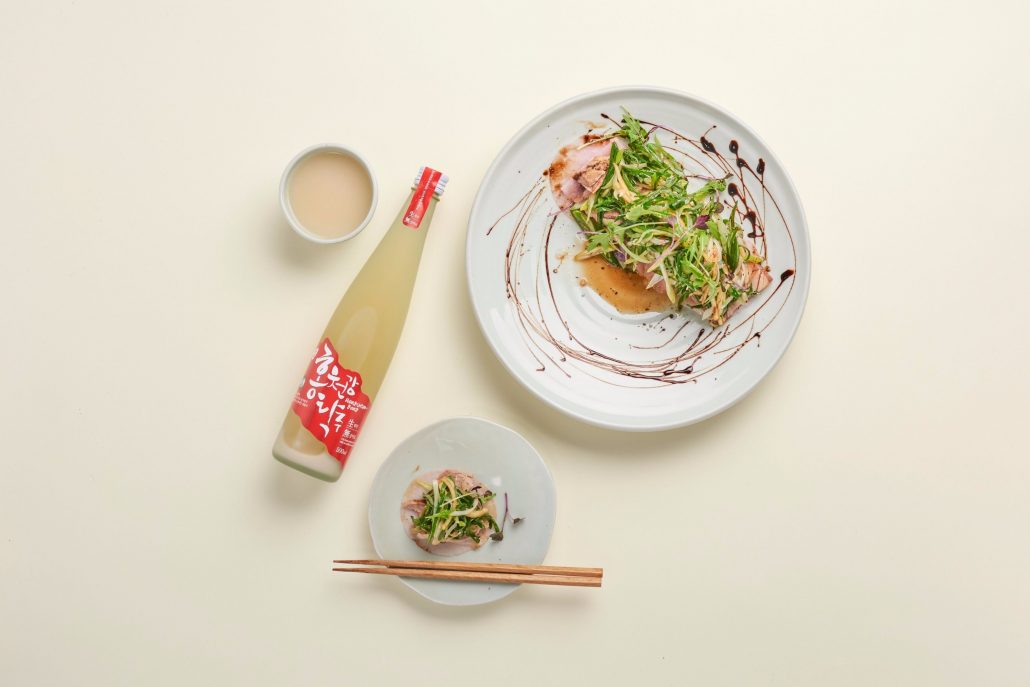 Bubu pork bossam & Hongcheon-gang Takju (Ye-Sul Brewery)
To prepare the Bubu pork bossam, Berkshire K pork – prized for its juiciness, flavour and high fat content – is first boiled and then pan-fried to achieve extra firm texture. The pork bossam is served with a tangy tsuyu dressing spiked with garlic and wasabi and garnished with fragrant scallions sautéed in olive oil. The mildly peppery scallions bring out the natural savoriness of the Hongcheongang Takju, a full-bodied dry makgeolli with prominent notes of nuruk. The spirit is a favourite among seasoned drinkers that has a relatively high alcohol content of 12 per cent, and has that clean, dry flavour typical of makgeolli made with non-glutinous rice. Bubu 0325 (Gyeonggi-do Goyang-si Ilsandong-gu Mugunghwa-ro 93-gil 29). 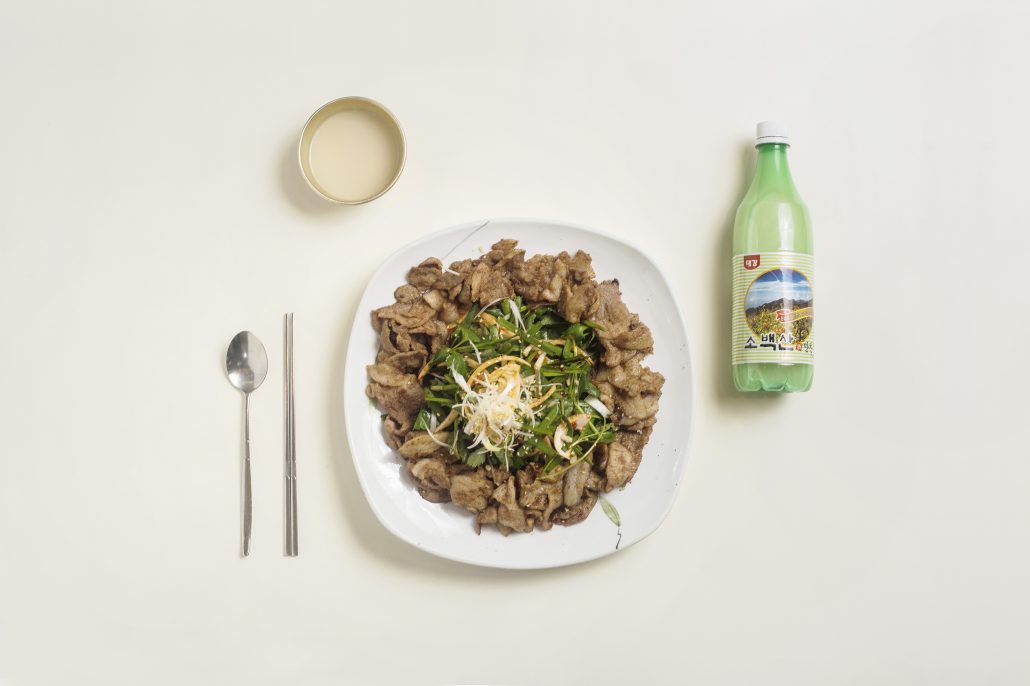 Chamnamul salad and pork bulgogi with Sobaeksan Makgeolli (Daegang Brewery)
Sobaeksan Makgeolli, an old-fashioned makgeolli fermented in an 80-year-old earthenware vessel is cherished for its yoghurt-like tartness and a smooth nuttiness,. It's a great match for Namsangol Sanchaejip’s pork bulgogi which is marinated in ground fruit and soy sauce and then pan grilled over high heat. The smoky pork bulgogi is served with a fragrant chamnamul salad lightly dressed with green plum gochujang and sesame oil. Namsangol Sanchaejip (Jung-gu Sopa-ro 93).
SEE ALSO: Korean Soups: What's The Difference Between Guk, Tang, Jjigae and Jeongol? 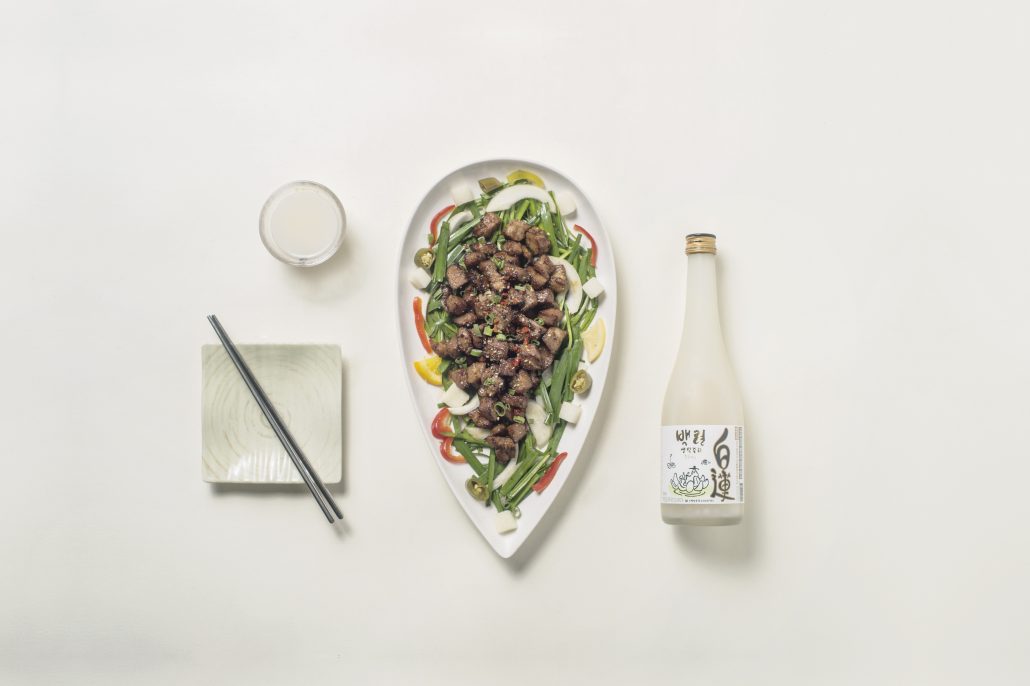 Chargrilled soy sauce-marinated pork neck with Baekryun Misty Makgeolli (Shinpyeong Brewery)
Soy sauce marinated pork neck is first pan fried and then grilled over charcoal to impart a wonderfully smoky aroma. The light yet creamy Baekryun Misty Makgeolli made with premium Haenaru rice counterbalances the richness of the pork while the mild sweetness of the beverage enhances the tartness of the pickled vegetables as well as chives that have been dressed with yuzu soy sauce.Chez Maak (Gangnam-gu Gangnamdaero 442, 2F) 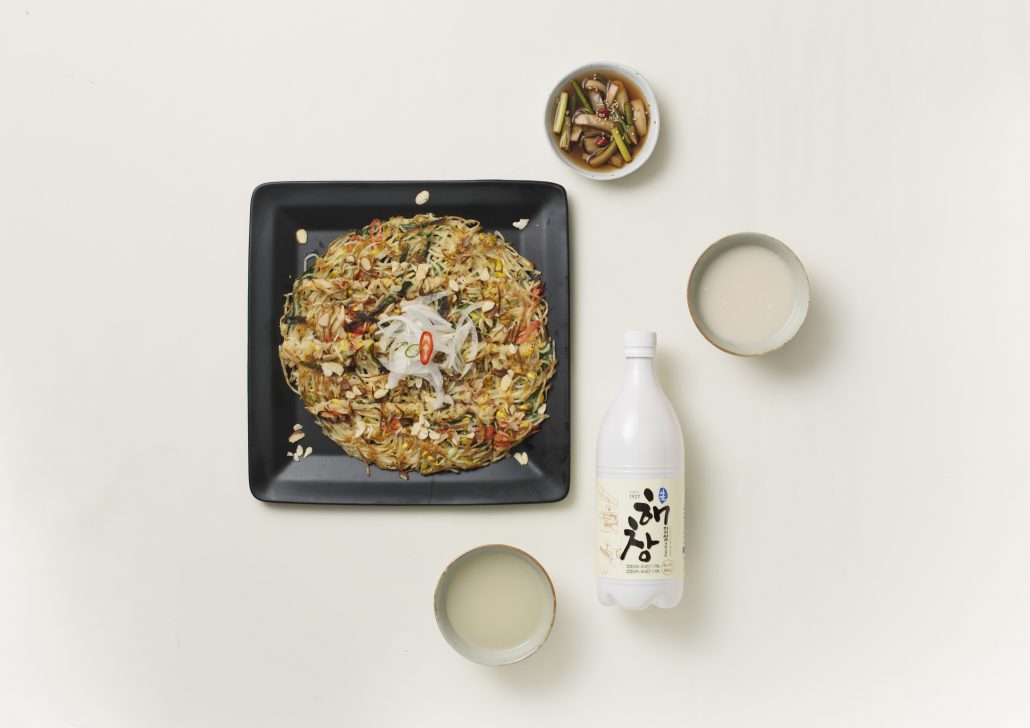 Bean sprout pancake & Haechang Makgeolli (Haechang Brewery)
A crispy and savoury pancake made with a generous heaping of bean sprouts are topped with thinly sliced raw onions and almonds. The ensuing result is bite after bite of crispy crunchy nuttiness. The full-bodied Haechang makgeolli from one of the oldest breweries in Korea dating back to 1927 pleasantly counterbalances the lightness of the bean sprout pancake.NurukNamu (Jongno-gu Insadong 6-gil 13). 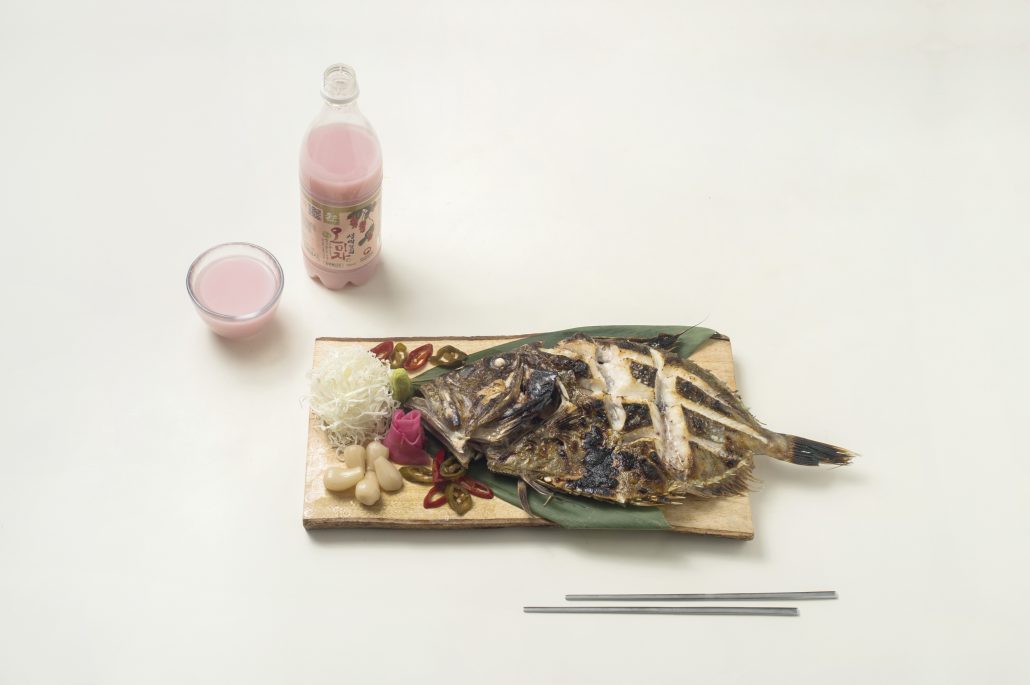 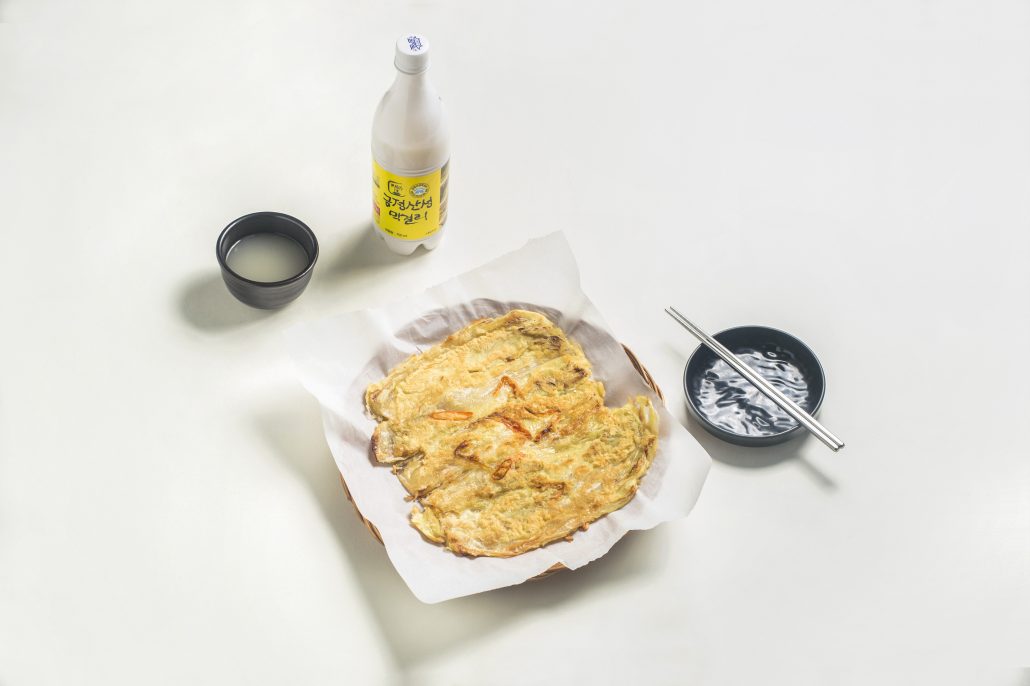 Aged kimchi pancake with Geunjeongsanseong Makgeolli (Geumjeongsanseong Brewery)
Aged kimchi leaves are rinsed, lightly dredged with flour, dipped in a six-grain batter and pan-fried until golden brown. The crispy batter helps the kimchi retain its crunchy texture even when cooked. The tartness of the aged kimchi neutralises the unmistakable acidity of makgeolli while bringing out the earthy, slightly musty scent of nuruk (a traditional Korean fermentation starter. Hidden Alley (Mapo-gu Donggyo-ro 34-gil 12). 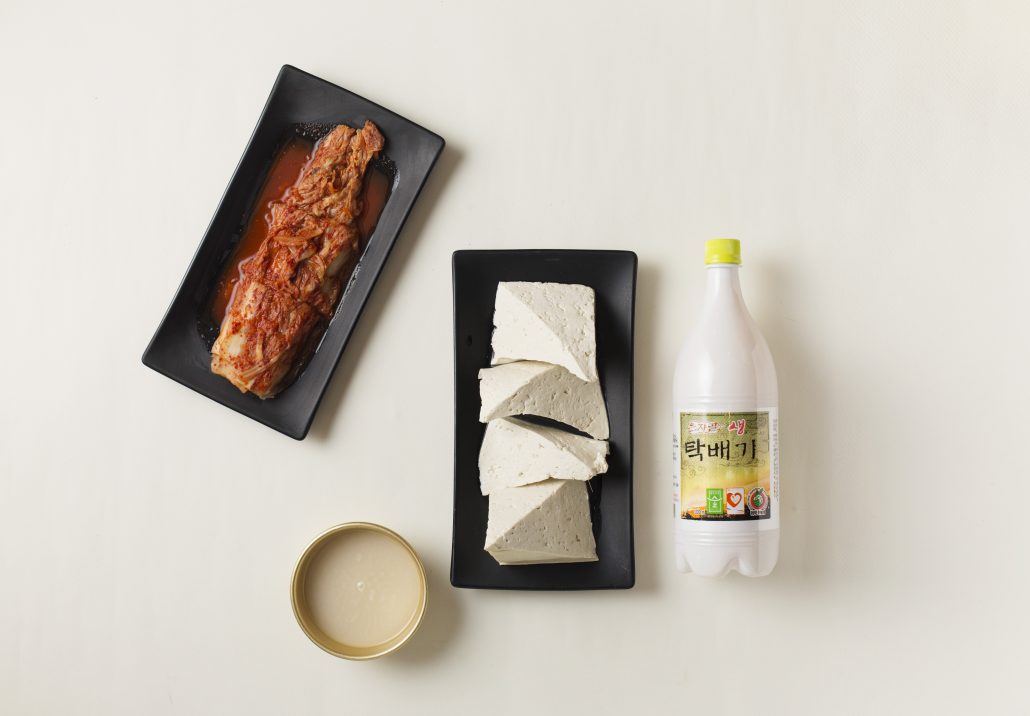 Taebaek Mountain kimchi and warm tofu & Eunjagol Takbaegi (Euncheok Brewery)
This simple dish of tofu and kimchi is as classic as it gets when it comes to pairing food with makgeolli. Fresh handmade tofu, delivered daily from Jeongseon in Gangwondo Province, are lightly poached until just warmed through and served with kimchi sourced from Taebaeksan Mountain. This humble but delicious dish is the perfect match for Eunjagol Takbaegi, a vibrant makgeolli with plenty of natural carbonation.Pureunbyeol Jumak (Jongno-gu Insa-dong 16-gil 17-1).

These warm and wonderful beverages will make your home smell like Christmas all day long.

This Man Is Changing The Way We Think About Mocktails

Let The Coffee Academics founder Jennifer Liu show you how to taste-test a cup of coffee professionally.

A bucket list of beverages born and bred down on the Bayou.