“I was lured in,” says chef Sung Anh, thinking back to the pivotal moment that marked the beginning of his career. “I left the US military for mechanic school because it was my dream to become a Porsche mechanic."

"One day, I was driving down Pasadena, California, to see my friend, and I saw this group of people in white coats and checkered pants. Back then, I had no idea what a culinary school was. I went in, got a brochure and spoke to a counselor. They told me it’s 100% job guaranteed, which sounded great. Right then and there, I called the mechanic school to ask for a refund and signed up with the culinary school instead.”

Anh, a first-generation Korean-American who immigrated to the United States when he was 13 years old, grew up helping out at his parents’ Chinese fast food restaurant (“a Panda Express type”) in San Diego, California. “My parents didn’t take it very well in the beginning. But I had a feeling that I wanted to do this.” he says. 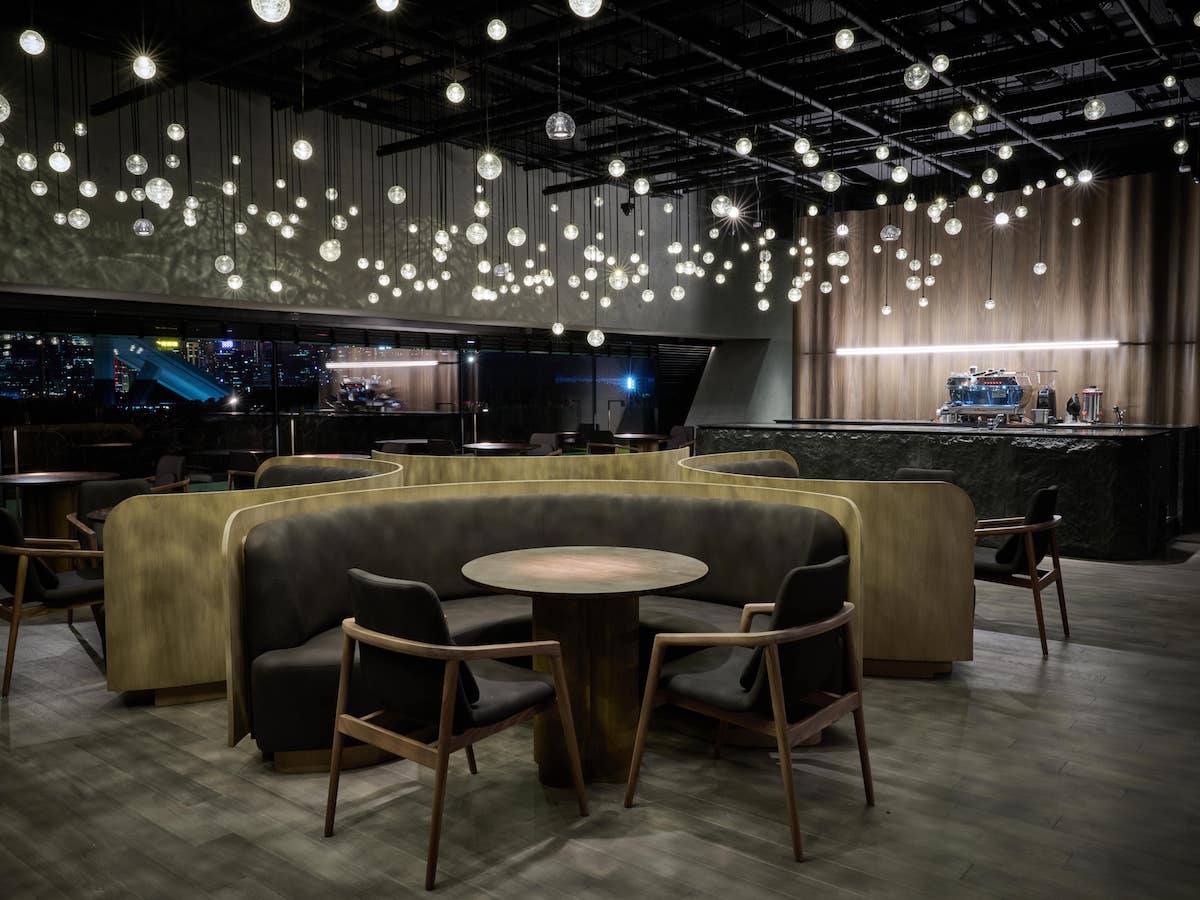 After graduating from culinary school, Anh had an opportunity to work at Urasawa, a Beverly Hills sushi restaurant.

“One day, chef Corey Lee came to eat at the restaurant. I didn’t know who he was, he was just sitting by himself,” recalls Anh. “I think he was impressed, not by my cooking technique but what I was willing to do in order to make the guests happy. We had a brief conversation in Korean and he asked me about my background. At the end, he asked, ‘Do you want to try out The French Laundry?’ I said, ‘Sure.’”

Two months later, Anh found himself in one of the most recognised kitchens in San Francisco, working his way up from commis chef to chef de partie. “I still have nightmares,” Anh says with a chuckle. “But it was great. Because of that experience, I am here. I am grateful for the opportunity.”

Shortly after his stints at Benu and Aziza, Anh opened his first restaurant, Mosu San Francisco, in the summer of 2015. When asked what cuisine he was serving at the time, Anh answers: “American.”

“I didn’t want to call it Korean-American because people would expect Korean food. It’s my American experience, which consists of Japanese from Beverly Hills, French from The French Laundry, etc,” he shares. Mosu San Francisco received a MICHELIN Star in the first year, before Anh decided to relocate to Seoul with his family.

“People said I was going backwards for moving to Seoul. But I saw it as an opportunity and chef friends like Min-goo from Mingles and Jung-sik from Jungsik were like, ‘Come, why don’t you be a pioneer of what we’re trying to do?’”

They were right. When Mosu opened in 2017, it was unlike anything Seoul had seen before. Describing his cuisine as “innovative,” Anh has established a distinctive style that weaves together his personal memories and experiences, highlighting subtle nuances of seasonal produce that is native to Korea. The name Mosu, a word play on “kosumosu,” a colloquial term for the cosmos flower, reflects not only his childhood memories of running around cosmo flowers in the park, but also his wish to bring a multi-sensory experience to diners.

RELATED: How Mosu Chef Sung Anh’s Focus On His Family Inspires Him In The Kitchen 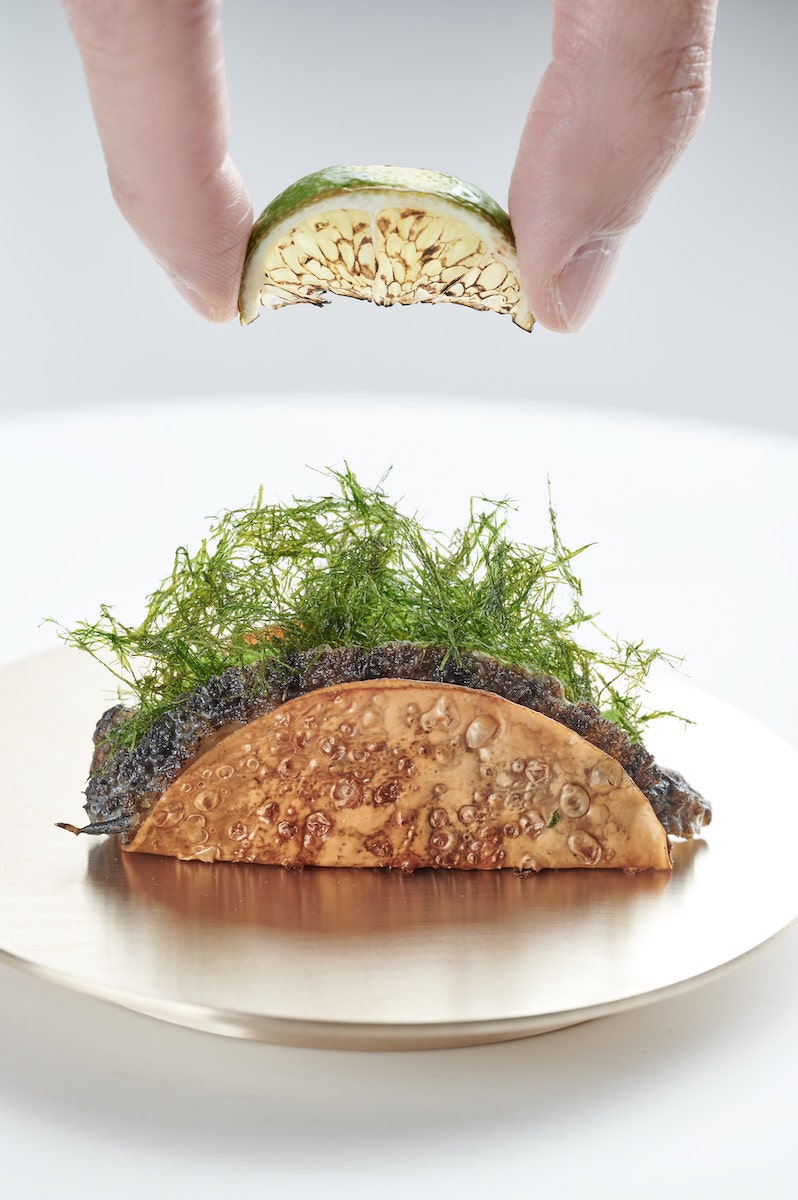 One of the signature dishes of two-MICHELIN-starred Mosu Seoul, which will be available at Mosu Hong Kong, was inspired by his favourite teenage memories and the hidden treasures of Korea.

“I grew up in San Diego, California as a teen. In the early nineties, my buddies and I would walk down to Tijuana, Mexico, and get tacos for $0.25. It was my favourite food to eat. We could just walk back and forth with our IDs at that time. So taco, in my head, is my teenage memory.”

Instead of corn, Anh uses yuba (soy milk skin) to make chips out of it and create a taco shell. The abalone comes from an island called Wando Island in Korea. “I visited Wando Island as a child and thought it was the most beautiful island I had seen in Korea,” he says. “They have abalone farms on the island. One of the reasons why I chose their abalone was because the water current is very slow so the abalone is much more tender and relaxed.”

Prior to Mosu Hong Kong’s opening on April 21, chef Anh gives us the lowdown on what we can expect from the menu and shares what makes Hong Kong a special place for him. 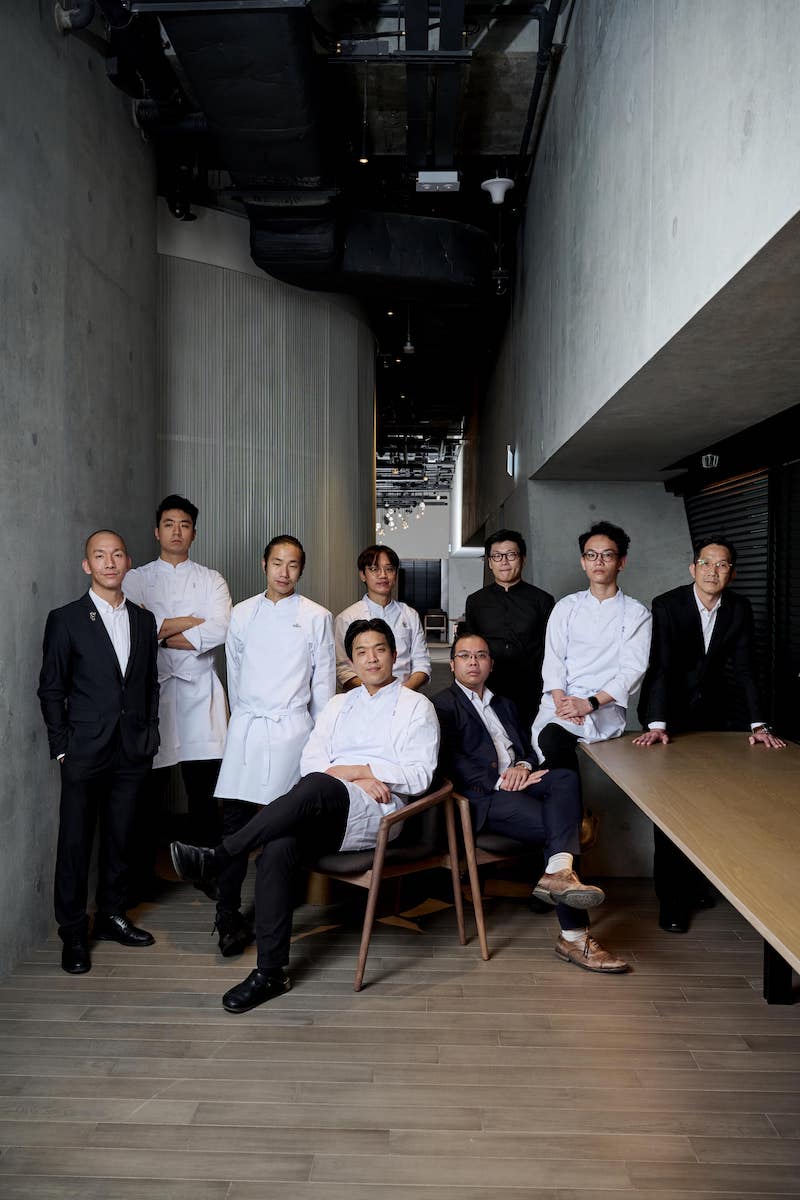 Why did you decide to expand to Hong Kong?

I’ve always had a connection with Hong Kong. When I was a teenager in the US, I’d watch Hong Kong flicks as my go-to escape from the world and reality. The protagonists in those flicks were my heroes.

So I knew the streets of Hong Kong, and the feelings of it. When I came here ten years ago, I was supposed to stay for a week with my wife, but we ended up staying for three, four weeks because I loved it so much.

I didn't plan to open a restaurant here in the beginning, but I always had it in mind that I wanted to be here someday. Pre-pandemic, I had a lot of guests from Hong Kong visiting Mosu Seoul, mostly by word of mouth because I’ve never done any PR for my restaurant. Among the 50% foreign guests we had, 20-30% on average were from HK.

Did you hire the Mosu Hong Kong kitchen team from Korea?

I’ve brought three chefs from Seoul, one of them is my sous chef from Mosu Seoul, who has spent the longest time with me. My head chef, chef Shim, is also from Mosu Seoul and he had spent 12 years working in MICHELIN-starred restaurants in Japan. I’ve been working with him for the last six, seven months for him to run the kitchen. It’s a new kitchen and a new environment so it feels fresh to all of us. 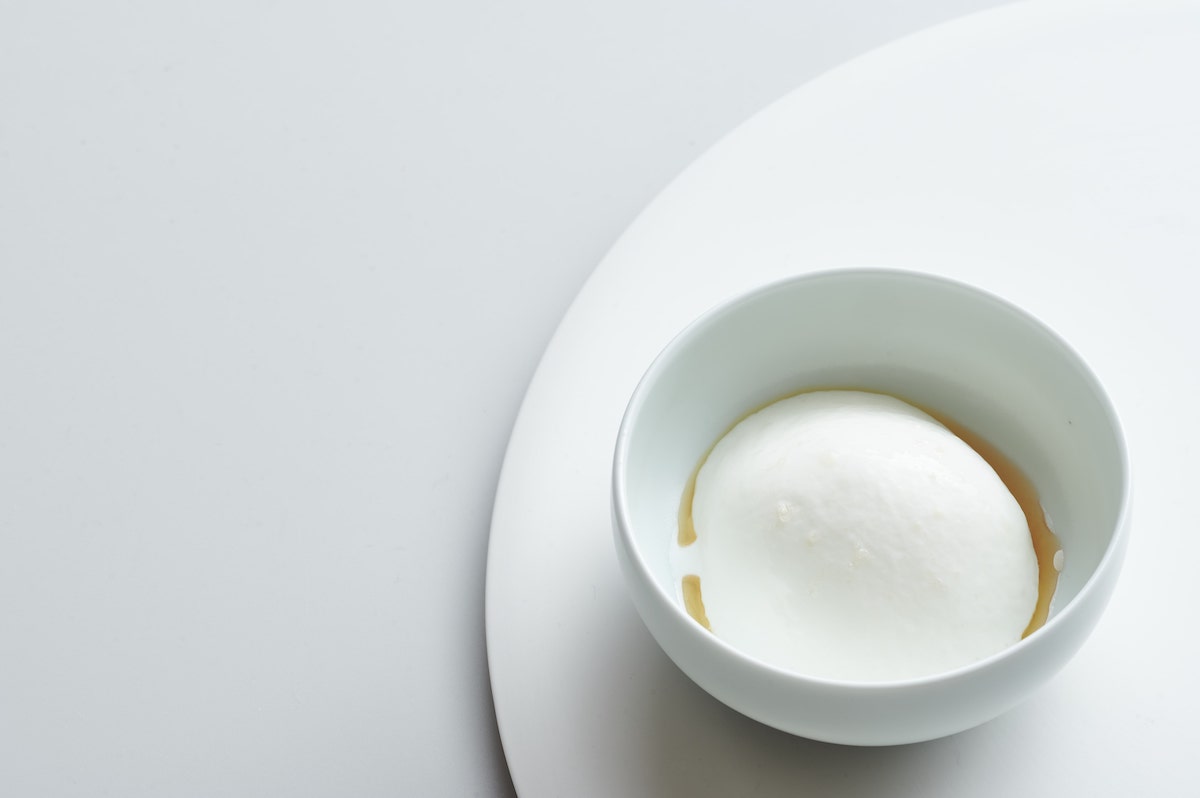 What can guests expect from Mosu Hong Kong? What will the menu look like?

Our genre is innovative Korean but it doesn’t mean we restrict ourselves to Korean flavours like the jang and fermentation. Like, instead of indigenous Korean berries, why not use Chinese goji berries? I’m really looking forward to using what’s available in our surroundings here.

For our menu, I try to follow the flow of kaiseki rather than French dining. Kaiseki makes sense to me as it goes from subtle to pronounced in flavour and texture. For dessert, I don’t do French pastry. The courses from start to finish have to flow together, so I put savoury and technical elements in the dessert so it doesn’t feel so segregated.

Are we going to find any of Mosu Seoul’s signature dishes on the menu of Mosu Hong Kong?

It was requested that we keep Mosu Seoul’s signature menu in Hong Kong, which makes sense because the name is Mosu but in a different city—it’s a representation of who we are. Signature dishes from Mosu Seoul will be in and out of the menu, along with the dishes we created for Hong Kong. 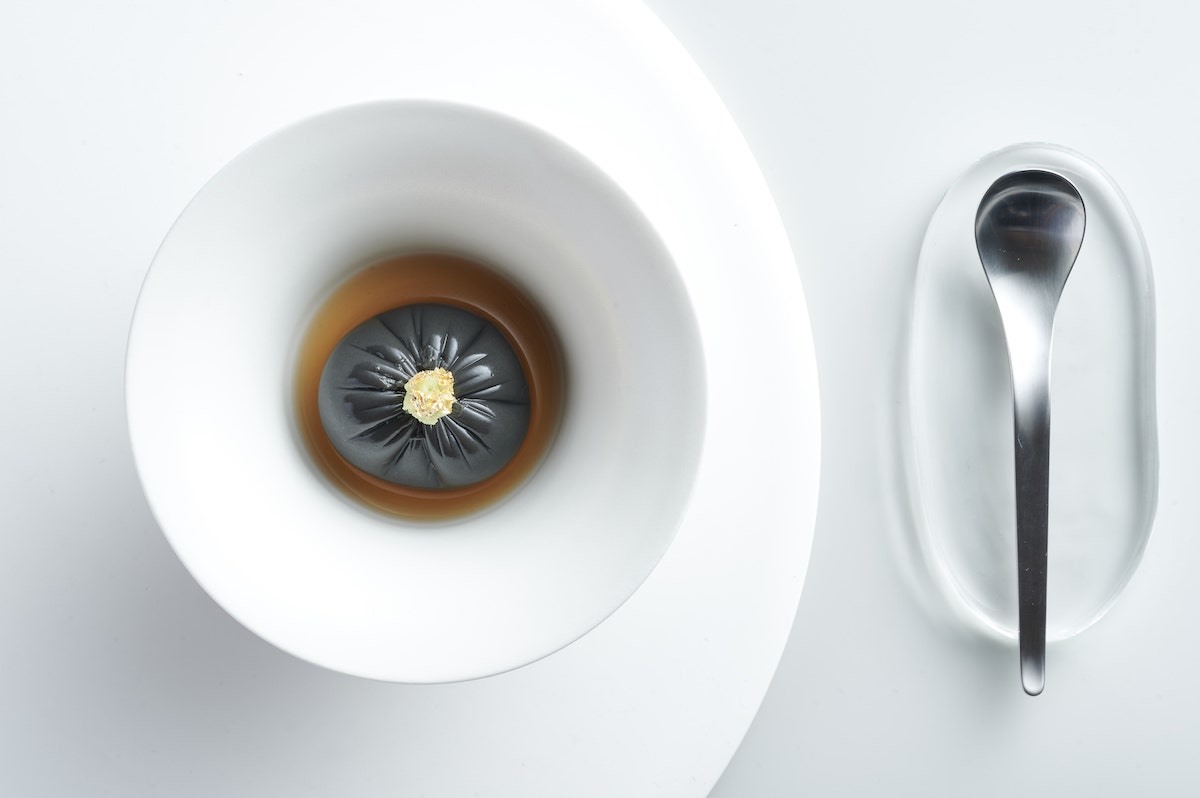 What’s your expectation and hope for Mosu Hong Kong?

I can’t really ignore the pandemic and the whole situation in Hong Kong. It's a new norm, I think, to adjust ourselves. We do have a brand and a concept. It's not a brand new restaurant. So I think in order for us to thrive in that concept, we have to be accepted, geographically and also culturally. We will try to do our best to be a restaurant in Hong Kong, not just a restaurant from Korea that's in Hong Kong.

I want Mosu Hong Kong to be within the culture itself. So when people visit Hong Kong, they go to Mosu Hong Kong, that kind of mindset. I want to try really hard to be accepted by everyone as a Hong Kong restaurant, which will involve food, cuisine and relationships with the guests—the whole aspect of operating a restaurant. I think we will have to try really hard to achieve that. So that's my goal for now.