“Indian street food is a celebration,” says chef Manav Tuli, chef de cuisine of MICHELIN Plate restaurant Chaat. “All the great memories I have of my childhood involve street food."

It is no coincidence then, that the word “chaat” refers to a broad spectrum of savoury snacks that can be commonly found on the streets of India. Some chaats you may have heard of: panipuri (which is also known as golgappa), samosa chaat, and vada pav. In a country with regional cuisines as diverse as India, chaat is a unifying force that transcends social class, religion and regionality. Often spiced and fried, chaat is crunchy, sweet, savoury, tangy, and spicy all at once, with over 500 varieties that can be found in all corners of India. 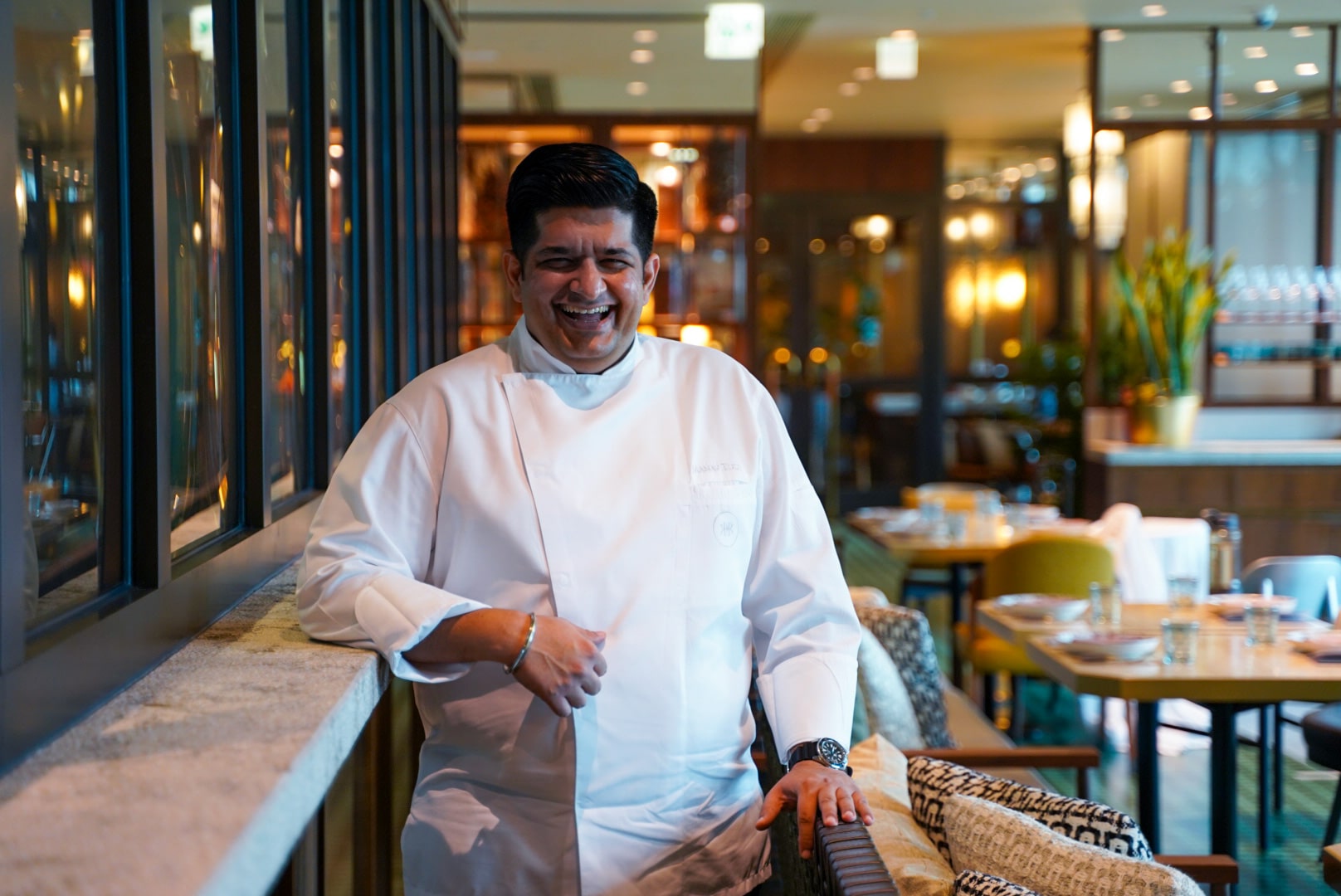 “You can have a five- or six-course meal on street food alone,” says Tuli. “My family’s favourite place for street food is Civic Centre in Bhilai where I’m from. My mom would start with golgappa, and my dad would always have the atom bomb—which is a raj kachori but five times the size. For me, I would go for my favorite street food, chole bhature (spiced chickpea with fried bread), followed by some pav bhaji. My cousin would get the dosa. Then, our final stop would be the shop that sells sweets like jalebi, kulfi, falooda, and rasgulla,” recalls the chef. “It’s an experience I’d like to repeat as many times as possible.”

Evidently, Indian street food is more than just a cuisine on its own—it’s a way of life. So what makes chaat so finger-licking good (chaat also means “to lick” in Hindi) and where can we find them? Chef Tuli gives the MICHELIN Guide the lowdown on some of his favourite street foods—including the ones you can try at Chaat. 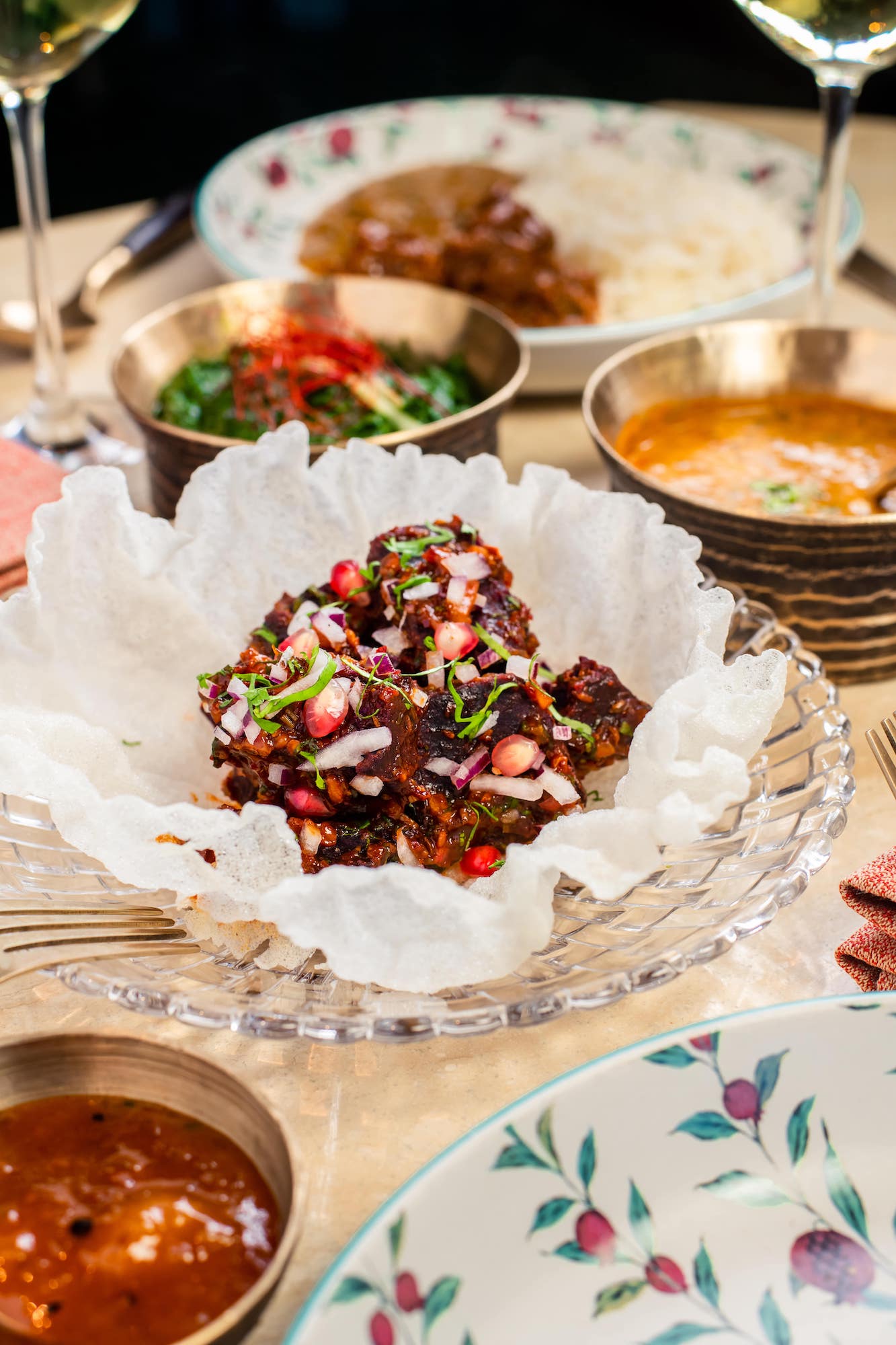 A specialty of Delhi, sweet potato chaat is sold on the street by khomcha walas ("khomcha" is a traditional food stand supported by three sticks, while “wala” refers to the person who carries the khomcha) and prepared fresh with diced sweet potatoes tossed with lemon juice, spices, onions, pomegranate, and tomatoes.

“I used to live in a small place called Kashmiri Gate, which is very close to Old Delhi,” says Tuli. “After midnight, Old Delhi was the only place still open so my flatmates and I would have food there. One of the foods we had was this sweet potato chaat—somehow I just couldn't get enough of it.”

Tuli’s version of sweet potato chaat begins with a batter of rice flour and corn flour. The sweet potato is dipped in the mixture for deep frying, before being tossed with a tamarind chutney, chopped onions, tomatoes, pomegranate, and coriander. The result is a delightful juxtaposition of crispy sweet potato cubes with sweet and sour tamarind chutney. 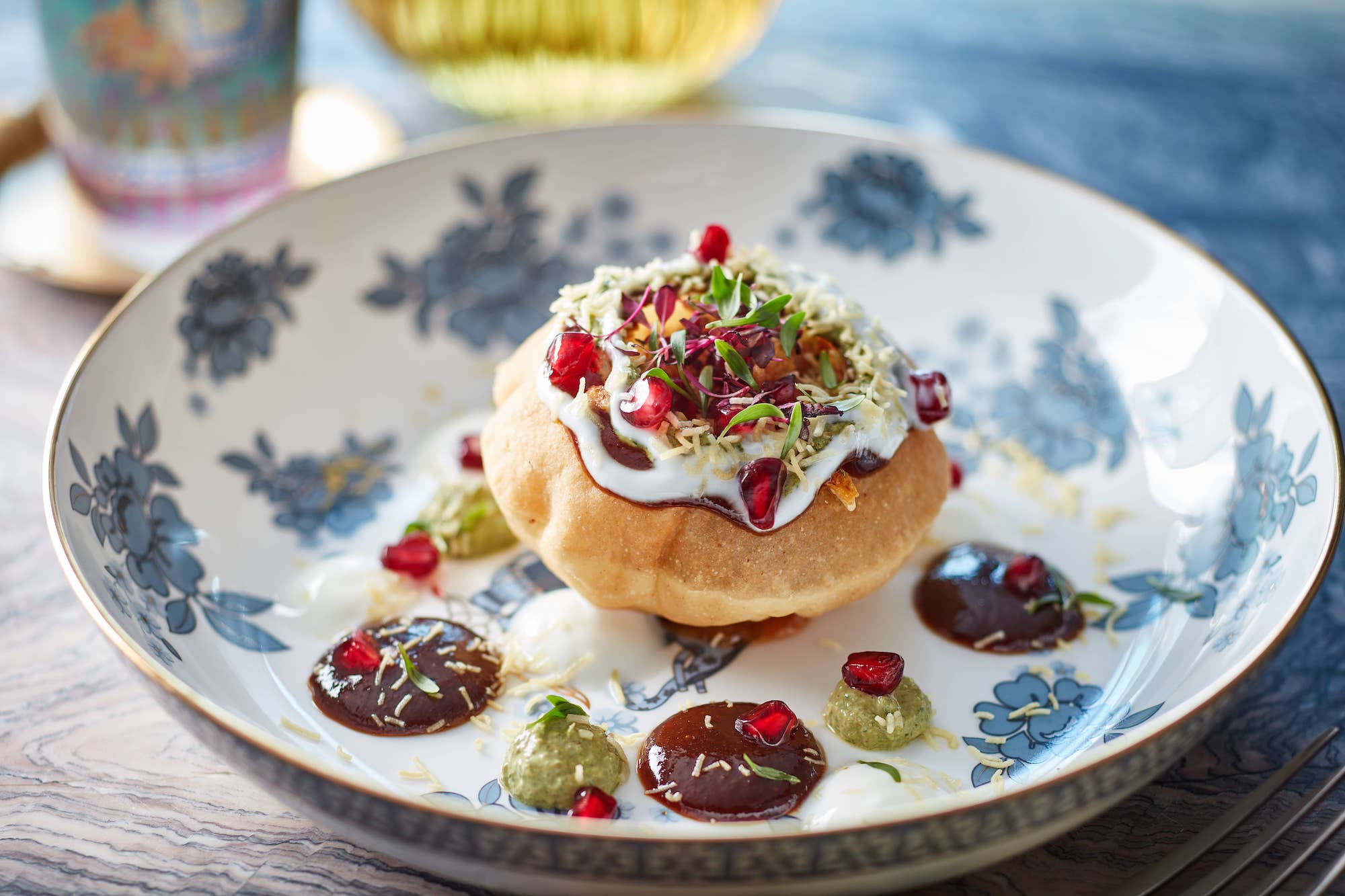 Raj kachori is known as “the king of all kachoris”, for good reason. For starters, “raj” means royalty, and “kachori” refers to the round deep-fried shell which can be enjoyed plain or stuffed.

“I used to travel from Rajasthan to Delhi by bus regularly, and every time the bus would stop on the highway there’s raj kachori,” he reminisces. The thickness of the shell of raj kachori may vary depending on where you get it, but it’s always stuffed with delicious fillings like potatoes, tomatoes, tamarind, mint, and yogurt.

“The version I make is inspired by Delhi. Typically the chutneys are poured on top, but I can’t do that in a restaurant setting as the crispiness will be lost. That’s why we put chutneys on the plate rather than smearing it all over the top. It’s meant to be enjoyed in one spoon so when you scoop the raj kachori you will get the chutneys as well. I also use a concentrated mango chutney that dries up quickly so it doesn’t affect the crispy shell.”

RELEVANT: Beginner's Guide to Indian Breads: 9 Types to Start With 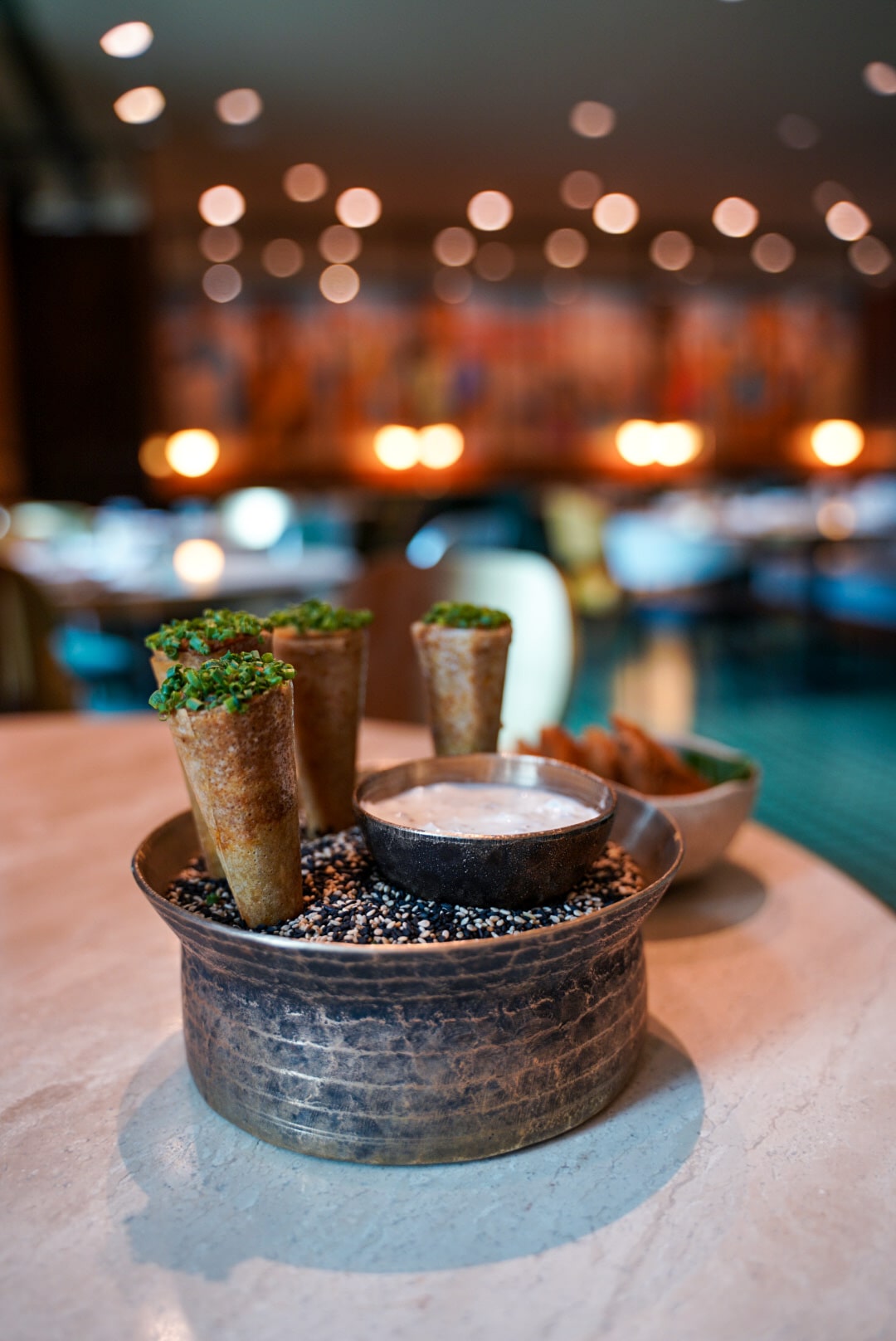 Contrary to common belief, samosa is not of Indian origin. “It came with the Turks when they came to India,” Tuli clarifies. “Potatoes were also non-existent in India. The British brought potatoes with them when they came.”

“The emperors and wealthy people, especially the moguls, used to travel to the south to a place called Hyderabad,” Tuli explains. “There’s a version of samosa there, but not with a thick outer shell but a thin one, like a wonton sheet. They make it into a triangle form and stuff it with lamb and then deep fry it. People still sell this samosa on the Hyderabad streets. You will see a guy on a bicycle with a small basket in the back selling keema (minced lamb) samosa.”

This samosa is the inspiration behind Chaat’s samosa. What makes it even more unique is the cone shape, which was inspired by a cream horn mould Tuli came across when he was working in London. Currently, Chaat’s a la carte menu features baked samosa filled with jackfruit meat—a plant-based alternative served with a yogurt-based dip called caper chilli raita. 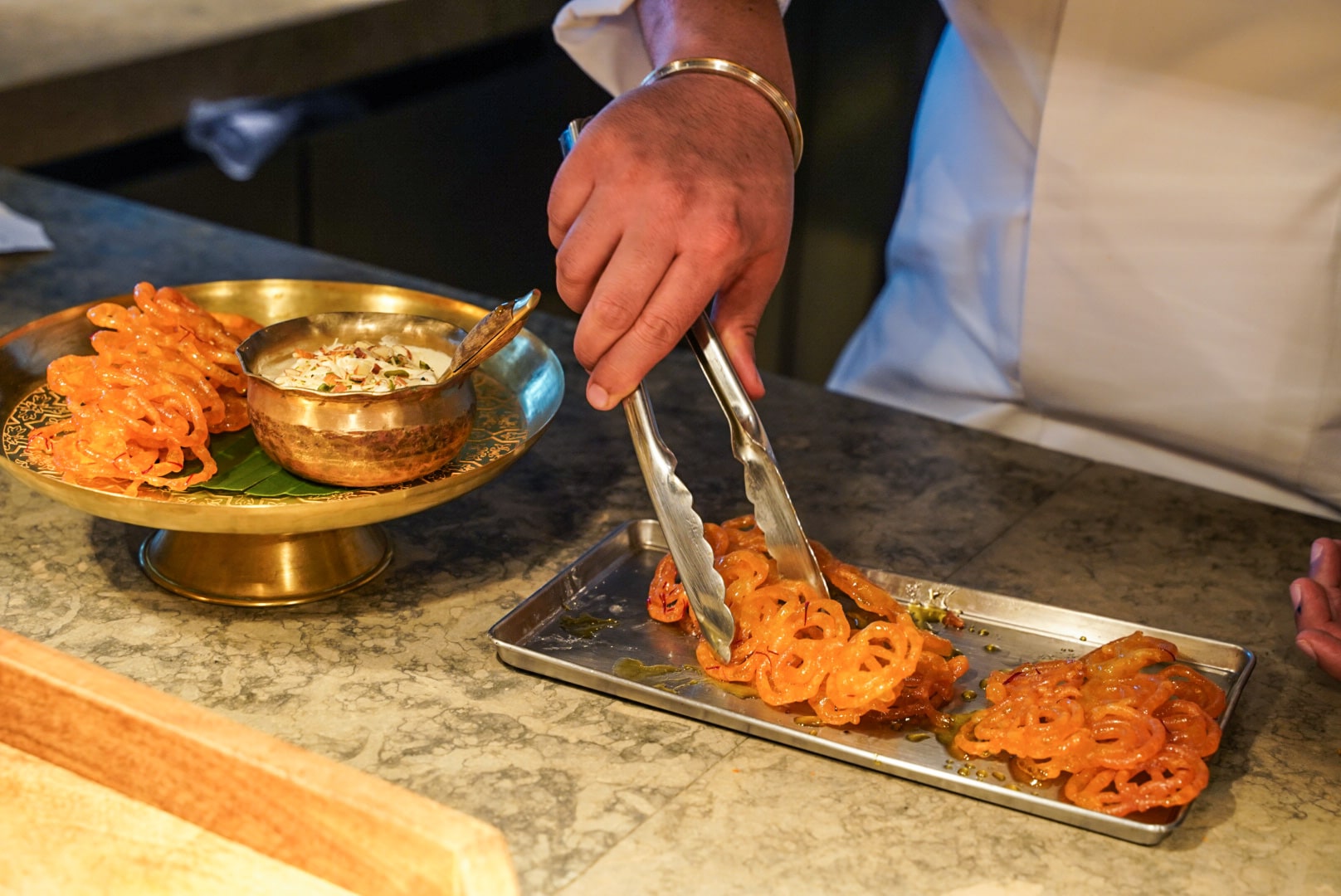 Jalebi made with fermented dough and coated with saffron syrup (Photo: Pearl Yan)

In Tuli’s hometown Bhilai, samosas are often sold with a dessert called jalebi. Made with fermented dough, jalebi is a spiral-shaped traditional Indian sweet that has to be eaten fresh. Like a sourdough starter, the batter for jalebi can be kept for years, and, in some cases, generations.

Traditionally, the jalebi batter is squeezed into hot oil through the hole of a muslin cloth and deep fried with ghee. These days, squeezable bottles are commonly used. The thickness of jalebi varies from region to region: the Rajasthan version is thinner, while jalebi from his hometown is thicker and often made with khoa (reduced milk).

Once the jalebis are fried until golden, they are taken out and soaked in saffron sugar syrup for three to four minutes.

Another Indian sweet that looks like jalebi is imarti, and there are several ways to differentiate a jalebi from an imarti. Jalebi is made from refined flour, while imarti uses rice and lentil flour. Look wise, jalebi is joined together to form long spirals, while imarti is made individually. In terms of texture, jalebi is crispier as it's always served fresh, while imarti is chewy and gooey.

“The trick and the art is how I combine local produce with my Indian spices and still keep it Indian.” 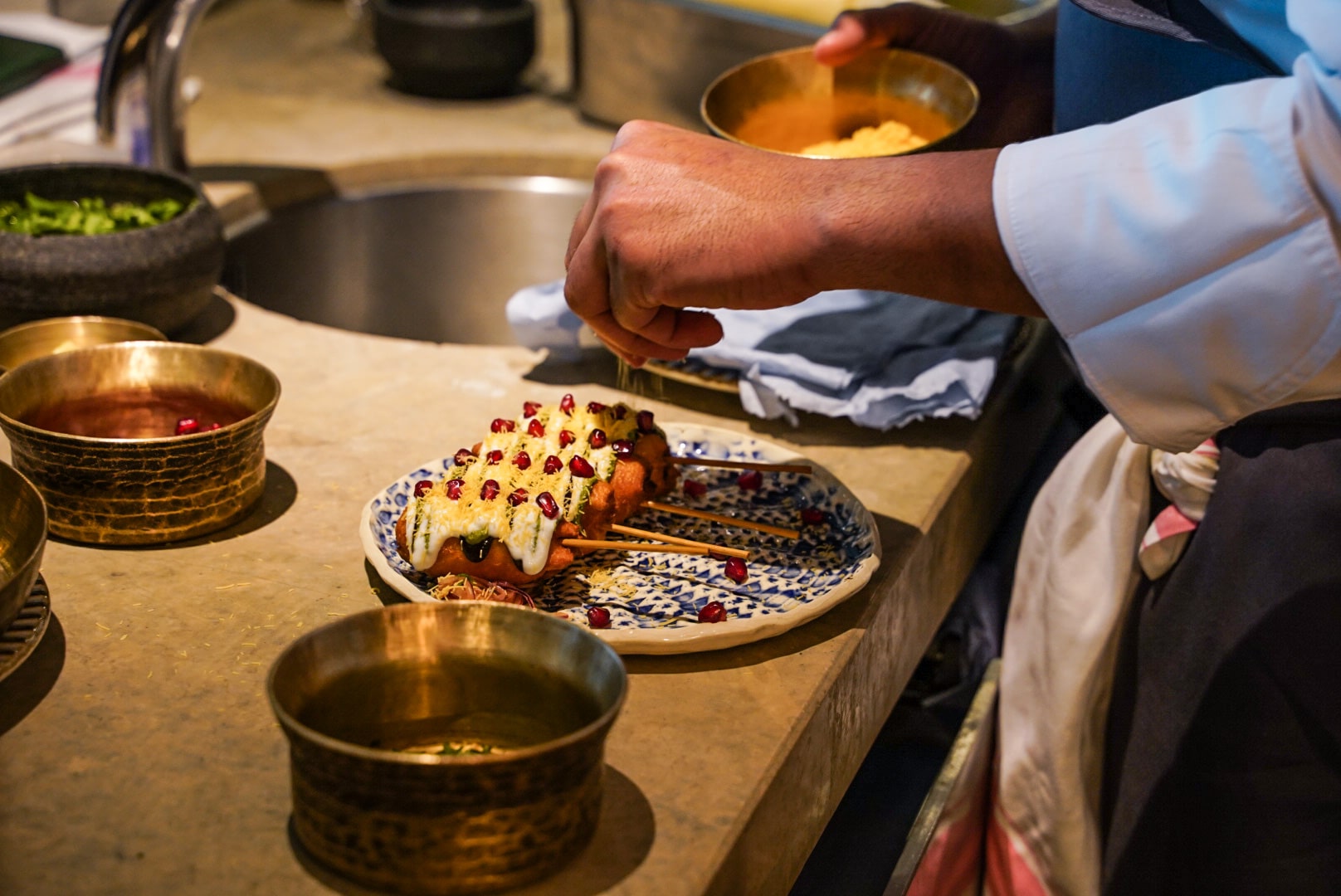 Kulfi actually refers to a frozen dairy dessert that is often described as “traditional Indian ice cream”. But kulfi kebab is more or less a kebab that takes the shape of a kulfi. The word kebab comes from the Arabic word kabāb, which has an original meaning of “less water”.

Kulfi kebab, a specialty of Delhi, is generally vegetarian. “In Delhi, they use boiled potatoes mashed with carrots, onions, green chilli, red chilli powder, and some spices like turmeric, ginger, and garlic together to form a ball, which is then wrapped with bread and deep fried,” explains Tuli.

At Chaat, his version of kulfi kebab is stuffed with beetroot and served with toppings like chutneys, pomegranate, and sev on a stick. 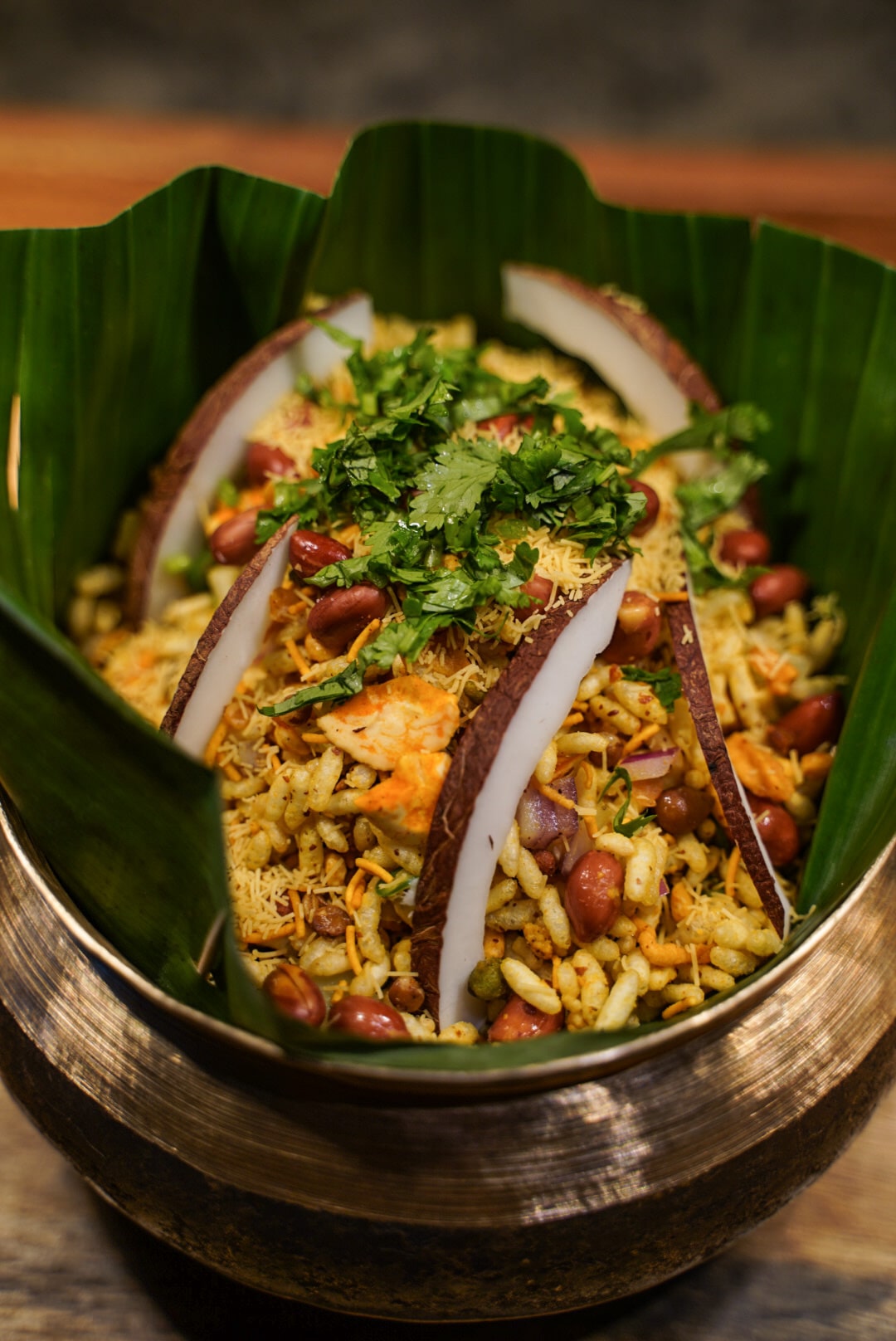 A dish that reminds Tuli of traveling by train in India, Jhalmuri is a Bengali street food that combines “jhal” (chilli), and “muri” (puffed rice).

“Traveling by train is a discovery in itself,” says Tuli. “If you are in second class or sleeper class, you will see khomcha walas selling this puffed rice dish, which is very light to carry.”

This dish is especially popular in Kolkata, where Gokul Mandal, one of the chefs at Chaat, is from. As a Bengali cook, he takes pride in introducing this staple street food from his hometown to us. The puffed rice is mixed with onions, green chilli, lemon juice, spices, chanachur (crispy savoury snacks), peanuts, and the magic ingredient—mustard oil, to add a piquant flavour to the dish.

But don’t mix this up with another puffed rice snack from the north: bhel puri, which is also a chaat but with tamarind chutney. 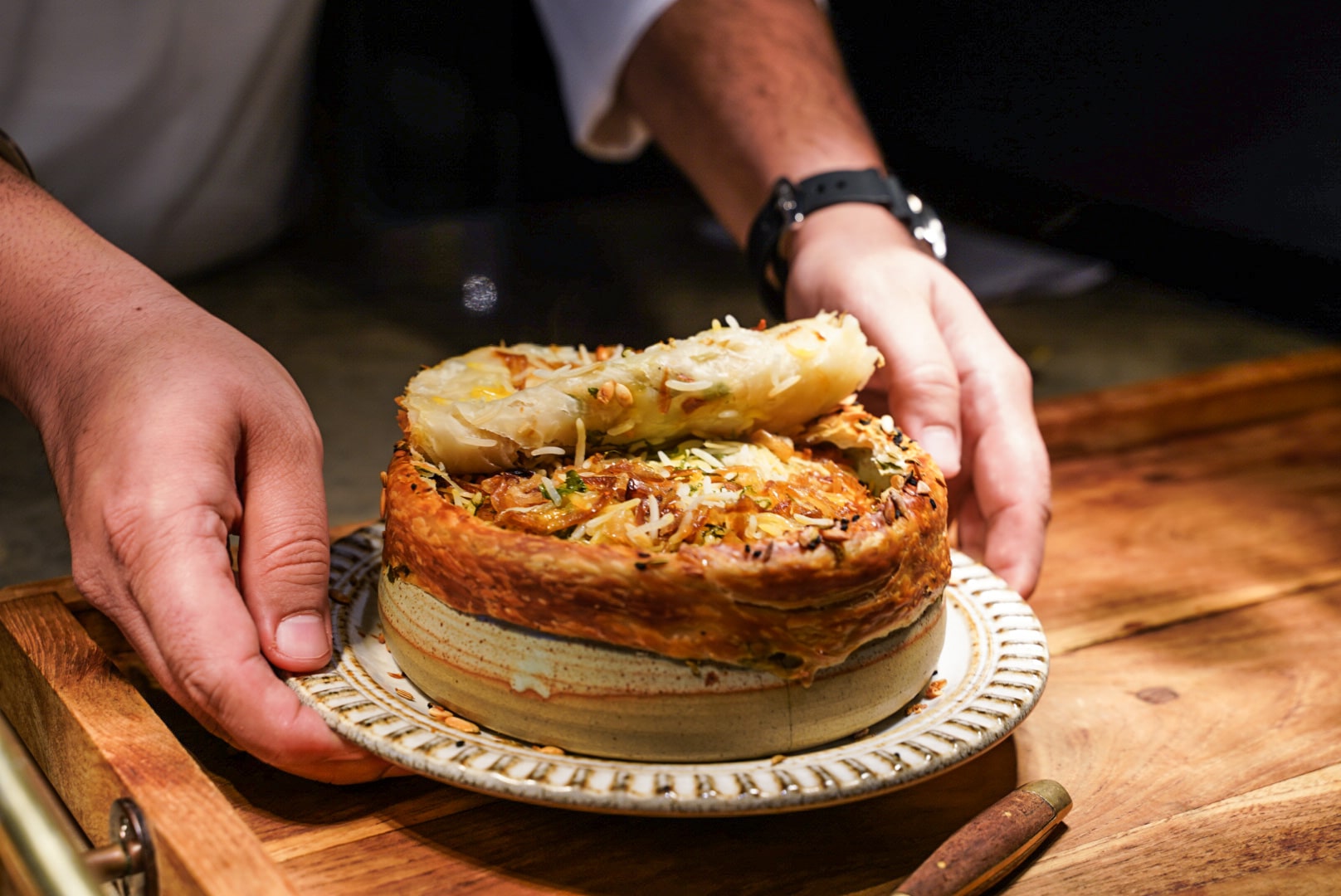 You may be thinking: How is biryani a street food? In Hong Kong, biryani may be more commonly found on the dining table, but in India, it’s often sold on the street in a food cart called thela. The word “biryan” means “to fry”—traditionally, biryani is a fried rice dish cooked in a big pot.

"To miniaturise it, I adapted the biryani from Hyderabad—a region famous for the dish. Because of the nizams (rulers) of Hyderabad, who had a lot of money and brought their cooks with them when they settled in the area, the food there is so refined that it’s a cuisine in its own right.”

This version of biryani can maintain the moisture because of the layers of onions, tomatoes, and yogurt, which form clumps of masala to keep the rice moist.

When asked about the protein (Chaat is serving lamb biryani at the moment), his answer is: “I’m very adventurous with my biryani." How? "I look at biryani in a way that we should always use what is locally available. I’m using local ingredients like octopus, abalone, crab, and red grouper—whatever is available locally and what people love. The trick and the art is how I combine these produce with my Indian spices and still keep it Indian.”