The quest starts with these yummy Dutch crunch pork buns.

Brandon Jew knows a thing or two about San Francisco’s Chinatown. Growing up, he and his family frequently snacked around the area. Now, he’s added his hat to the ring with some of the most distinctive fine food in the neighborhood. His restaurant Mister Jiu’s—named for the correct spelling of his family name, which was changed when his grandparents immigrated to the U.S.—just earned a Michelin star in its first six months of operation.

Commonly misconstrued as an unhealthy cuisine using cheap ingredients, Jew is on a quest to change the conversation about American Chinese food. “Everyone’s buying the same fermented black beans, the same oyster sauce, that’s why it all tastes the same,” he says. “And when I look at the ingredients, it’s all full of crap.”

Jew differentiates his food by giving his menu a modern sense of place—he makes all pantry items from scratch and utilizes the sumptuous bounty of local California produce. In other words, Jew jokes, “We like to make things as complicated as we can.”

SEE ALSO: Why Asian American Food Is Having Its Moment

Case in point is the Dutch Crunch BBQ Pork Bun, which rejects the typical conventions of a char siu bao for something altogether more natural and flavourful. Typically, char siu often has a fiery red hue due to artificial additives. To find an alternative, Jew brainstormed and experimented with organic foods that could achieve a vibrant color, if not the same shade. The result—a sauce made with beets and tofu that had been fermented in red rice.

The roasted pork belly and beet/tofu sauce is then sent from the kitchen to pastry chefs Melissa Chou and Kelly Teramoto, who produce enough buns to fulfill at least 35 three-piece orders. (This number recently increased due to the buns becoming available in the main dining room.)

“It’s been really interesting using our pastry backgrounds for this kind of stuff, it’s been really fun,” says Chou. “Chinese food has a lot of crossover as far as pastry skills are concerned.” 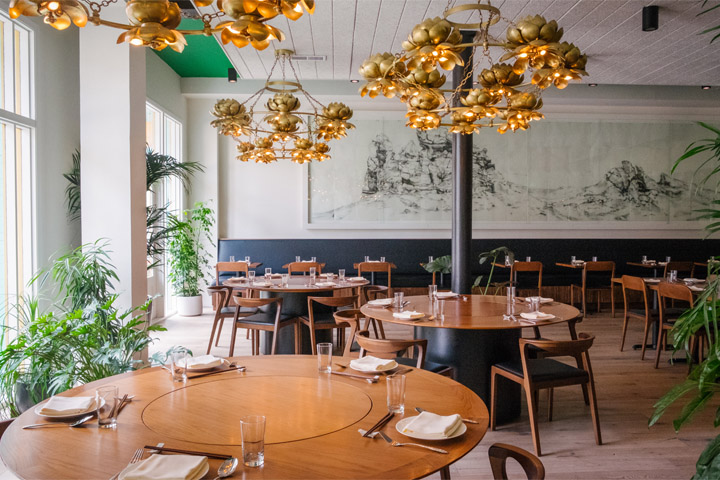 The interiors of Mister Jiu's. Photo credit: Mister Jiu's
The dough is actually a milk bread made without eggs, often mistaken as brioche by customers. Once filled, it’s topped with something reminiscent of the sandwich bread of choice known to Bay Area natives. “I didn't really know how to describe the topping of what we were doing other than, it's kind of like Dutch crunch,” Jew admits. Instead of traditional sesame oil and rice flour, a sheet made of housemade pork floss, butter, brown sugar, and flour streusel is placed on top.

“In hindsight it worked out; more and more we go down the path of trying to figure out where we mix the Bay Area and American culture into the Chinese aesthetic and tradition. It’s a balance I'm still trying to figure out. The food that I want to express can only be represented by the ingredients and the culture of the Bay Area—I'm striving towards a real definition and distinction of San Francisco Chinese food. That's the path that we're on.”
This article first appeared on Robert Parker Wine Advocate in March 2017. Click here for more stories from Wine Journal.
Advertisement
Advertisement