What is Solera?
Solera literally means ‘on the ground’ in Spanish and is a technique of aging beverages like wine, brandy and beer by fractional blending. It is most common in wine-making where wine barrels are arranged in rows and on top of each other. The lowest row (known as the solera row) holds the oldest wine that’s ready for bottling while the highest row contains the youngest.

“The idea is that when wine is required for bottling, it is drawn from the solera row, but never more than one third of the contents at any one time,” wrote author David Bird in his book Understanding Wine Technology. “The barrels are then topped up from the next oldest row, and they are topped up from the previous row and so on, until the youngest barrels are reached.”

SEE ALSO: How To Store Wine In A Tiny Apartment 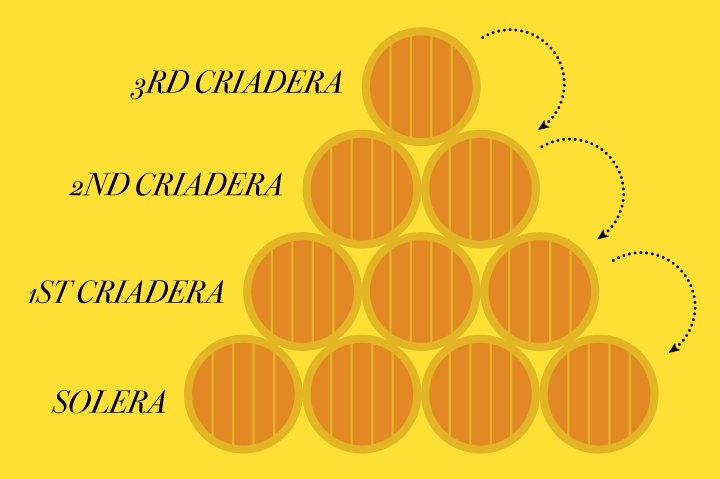 The science behind it
The purpose of such a system is to create beverages that are consistent in flavour and alcohol content despite the complex mix of ages. This means that every bottle to have emerged from this process will contain molecules of the original wine – at least in theory. It also continuously supplies older wines with nutrients from the younger wines required for the wine to age and the development of yeasts that grow on the surface.

Solera around the world
The system was developed out of the Iberian peninsula but different spirit-making traditions around the world have similar ageing processes. In Okinawa, Japan for instance, a similar process known as shitsugi exists for the production of awamori – a distilled long grain rice alcoholic beverage. Instead of barrels, kusu (aged awamori) is placed in urns but the the same principles apply where younger kusu is added to the older urn.

Such a technique is also present in the food world, specifically in chef Enrique Olvera of Pujol’s contemporary interpretation of producing mole (pronounced mo-lay) – a sauce made from a myriad of ingredients. He tops his base mole off with a new batch whenever the restaurant is down to the last 10 litres. The chef tells the New York Times: “This Solera system gives us a mole that is exponentially more subtle and complex than your average mole.”