American novelist Henry James once wrote, "There are few hours in life more agreeable than the hour dedicated to the ceremony known as afternoon tea." With buttery scones and Cornish clotted cream at The Dorchester and the elegant art-inspired pastries at the Rosewood Hotel, we cannot think of a better city for indulging in a nice, hot cup of tea. London is, after all, the city where high tea is a religion and a national pastime.

If you happen to find yourself in London with many an hour to lull, here are seven locales that will look after you. 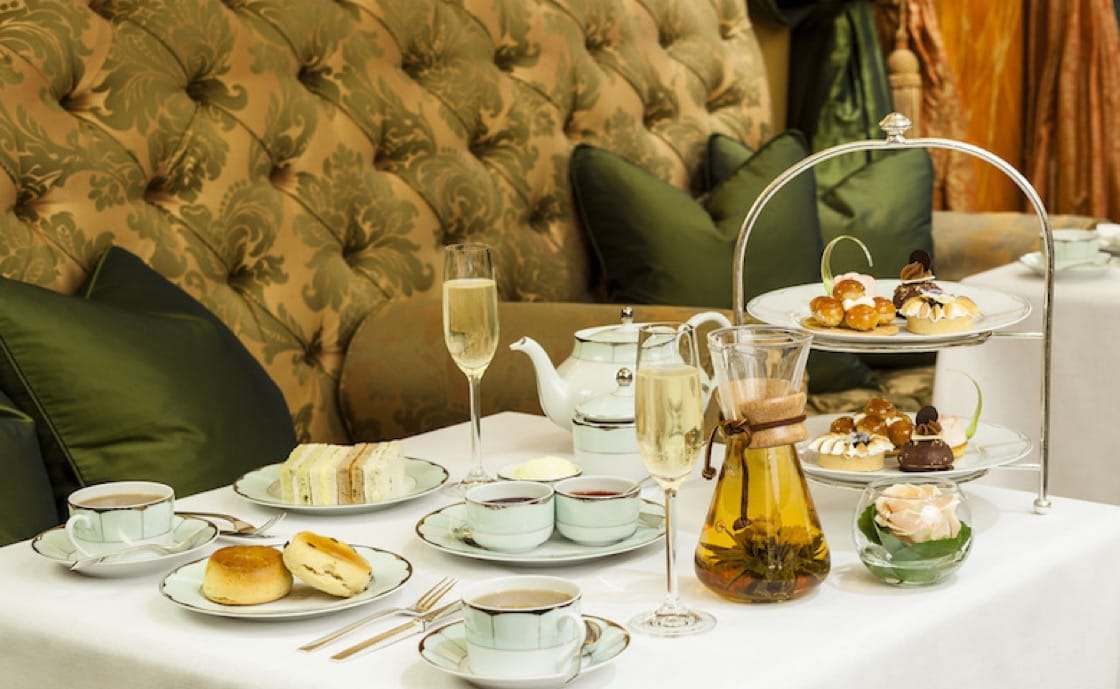 Champagne afternoon tea at The Dorchester hotel starts at £68 ($89) per person.

To experience a quintessential British afternoon tea without the onslaught of tourists, give Claridge's a miss and head over to The Dorchester. Here, the tea is every bit traditional; the first afternoon sitting dating back to 1931. It's opulent, indulgent and downright tasty—scones, finger sandwiches, sweet pastries and Cornish clotted cream are made fresh everyday. 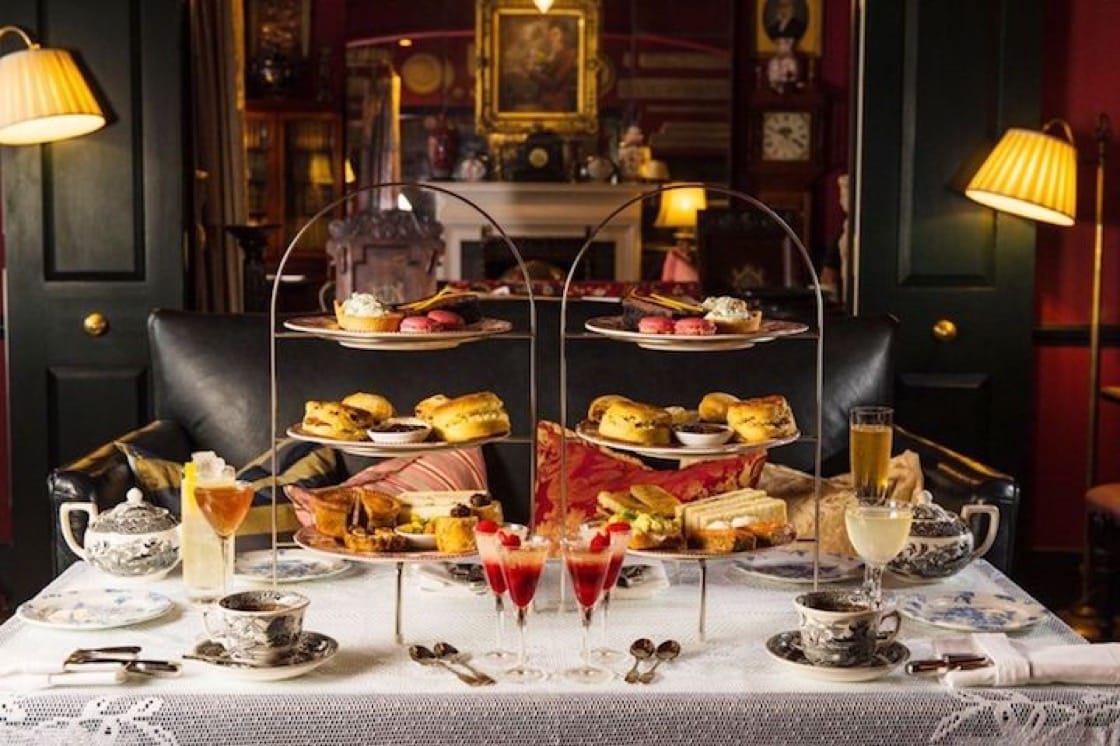 Dark, sultry and tastefully kitschy, afternoon tea at Seymour's Parlour is equal parts fun and glamorous. There are two sets to choose from: the daintier Aunt Wilhelmina menu, which comes with a selection of finger sandwiches, or the Uncle Seymour, featuring heavier delights like pork pies and haggis sausage rolls. 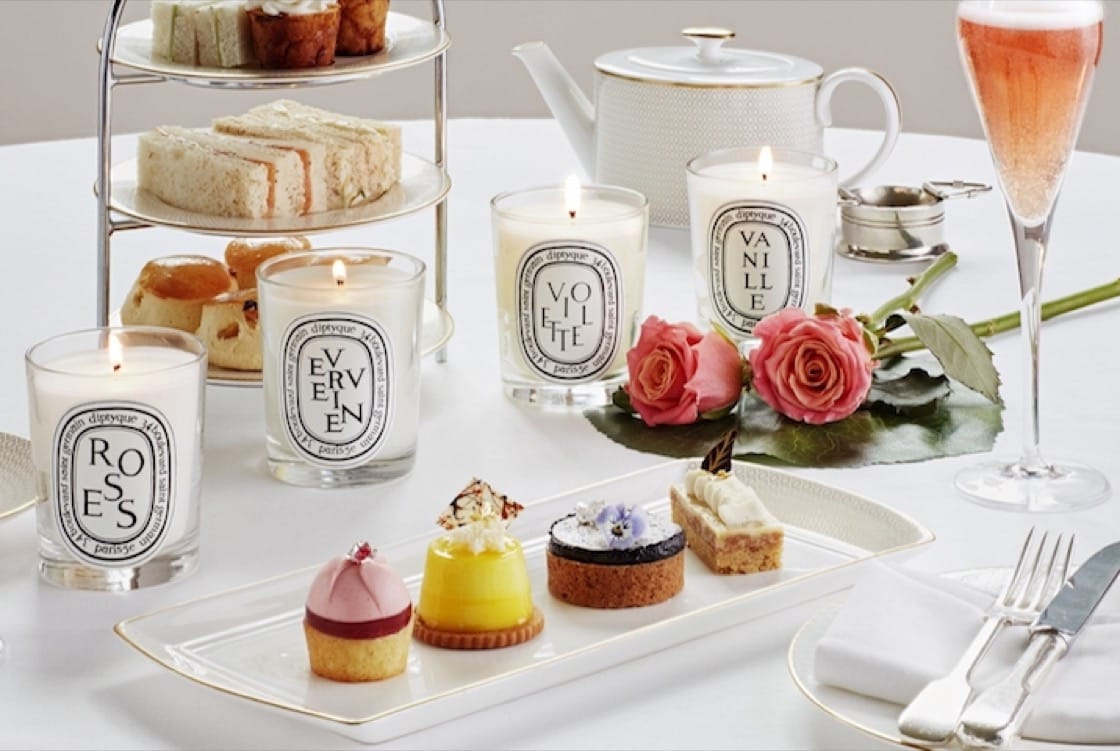 This is a collaboration of the senses between Hotel Café Royal and the French perfumer Diptyque. The food is made with the ingredients found in the scents of the lighted Diptyque candles, resulting in an afternoon tea that's as delicious as it is aromatic. Guests can also opt to top the tea setup with a signature Diptyque Baies candle, which promises the scent of Bulgarian roses sweetened with blackcurrant leaves. 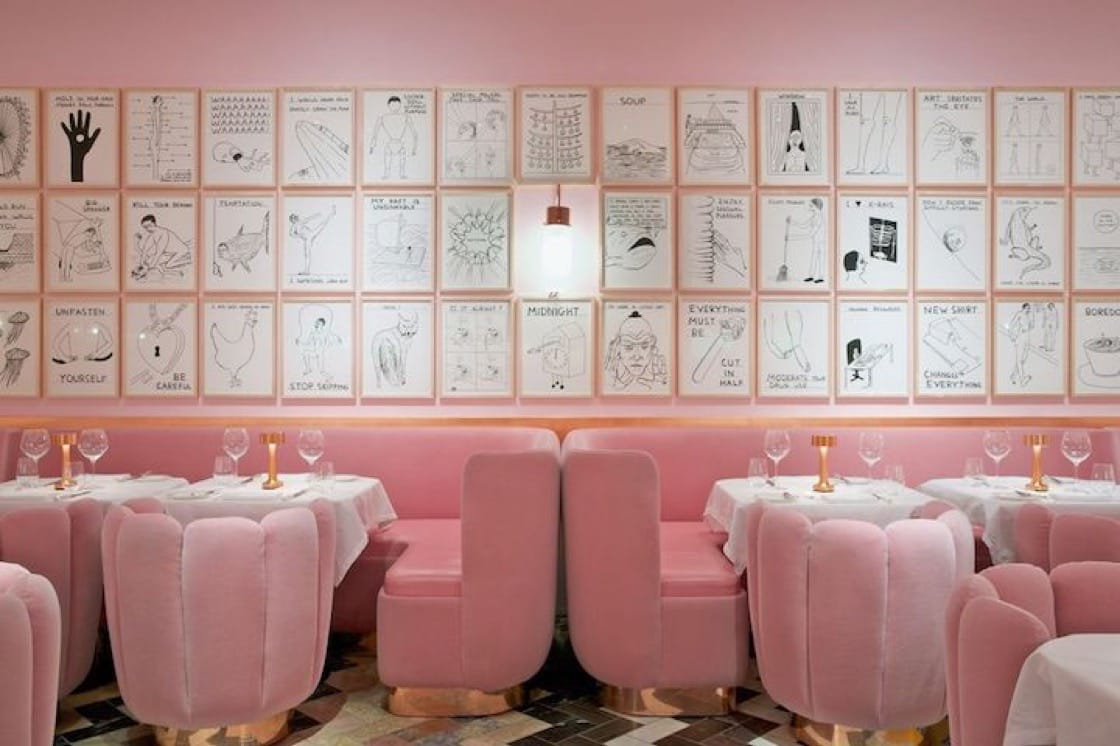 The Gallery room at Sketch resembles a still out of a Wes Anderson movie.

So named for the army of quirky sketches that line the walls, Sketch resembles a still grab from of a Wes Anderson movie; think plush pink chairs, marbled chevron floors and rose gold hardware arranged in a harmoniously symmetrical fashion. Customers get to select from two menu options: the classic afternoon tea or a tea paired with some bubbly. There's also a children-friendly tea set complete with a stuffed bear (named Pat) who dons hand-knitted baby Alpaca wool booties and a matching hat. 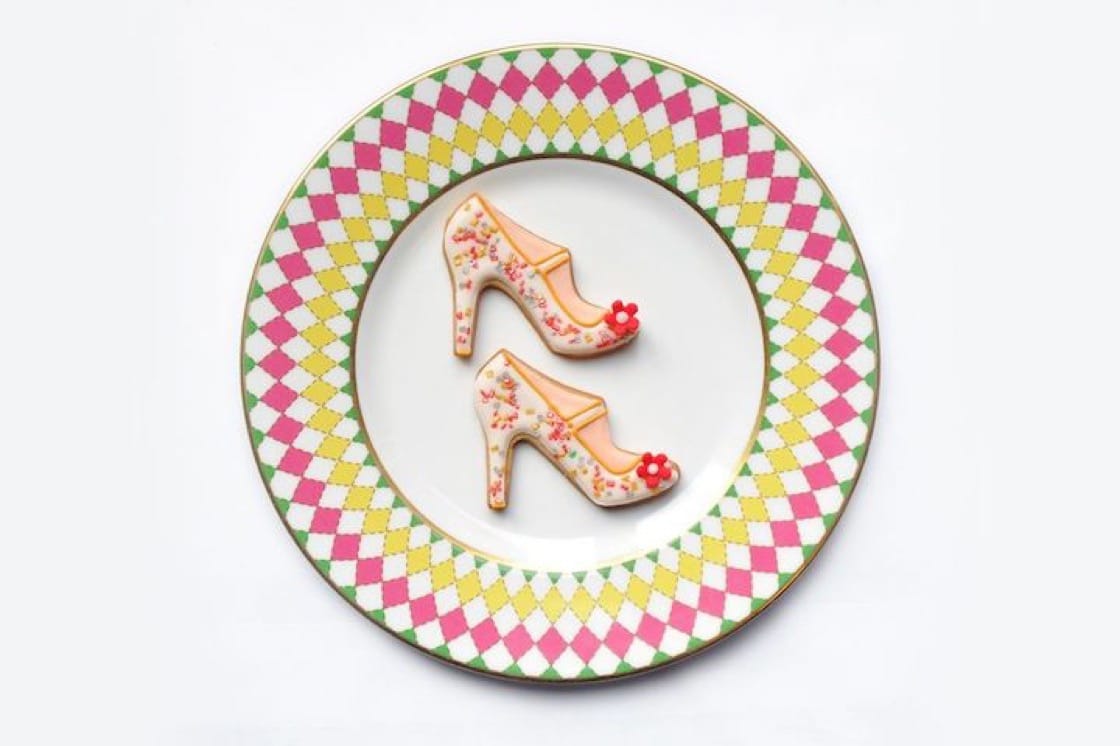 Afternoon tea for the well-heeled at The Berkeley Hotel.

The Knightsbridge-area hotel has been serving the whimsical tea inspired by some of the biggest fashion houses since 2006, updating the "collection" every six months to reflect the season. Served on bespoke Paul Smith china are Prêt-à-Portea's miniature savory skewers, finger sandwiches and elegant canapés. 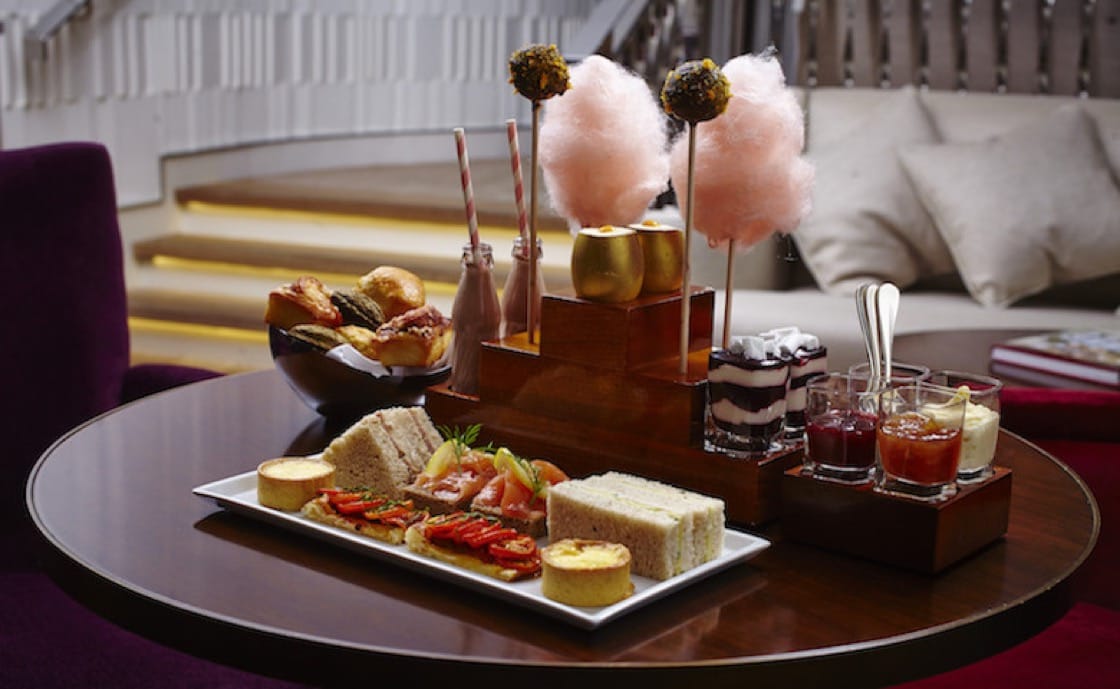 Cotton candy, golden eggs and caramel milk: an afternoon tea after the heart of a sweet-tooth.

Here's an afternoon tea that fans of Roald Dahl's Charlie and the Chocolate Factory will appreciate. From golden chocolate eggs and cotton candy to warm scones with plum jam and blueberry brioches, this tea set is positively scrumdiddlyumptious. The everlasting Gobstopper or the three-course-dinner chewing gum will not be making an appearance, but we reckon you've got quite enough on your plates. 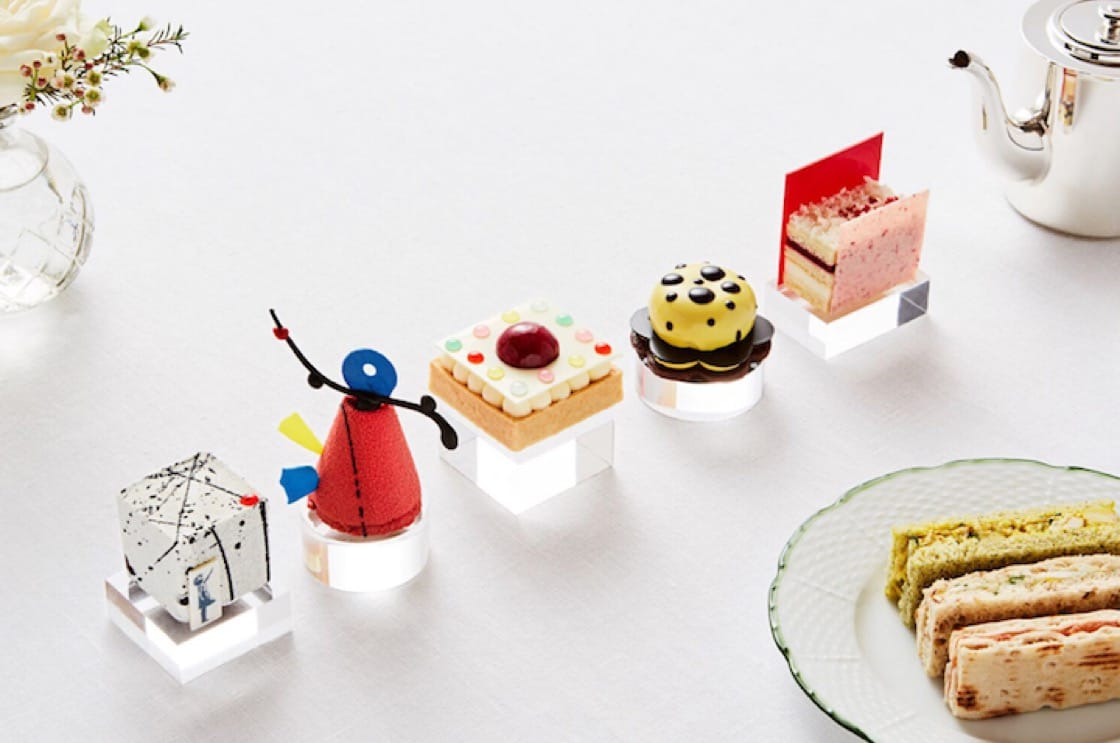 Many consider afternoon tea to be an art form, but here's a place that has taken that notion quite literally. Enter Rosewood London's afternoon tea, which plates up truly awe-inspiring pastries modeled after the works of five exceptional artists: Yayoi Kusama, Hubert Le Gall, Mark Rothko, Damien Hirst and Banksy.