Last month, it was the clash of two Asian-influenced restaurants: In one corner, Junghyun “JP” and Ellia Park’s New York-based one-MICHELIN-starred Atomix, whose cuisine is “upscale, sophisticated, beautifully designed and capable of elevating Korean dining to a new level,” state MICHELIN’s squad of anonymous inspectors. And in the opposing corner, Kyle and Katina Connaughton’s three-MICHELIN-starred SingleThread hailing from Healdsburg, California, where “every detail has been considered, from the moss and flowers cradling the amuse-bouche presentation to the packets of heirloom seeds that are sent home as parting gifts.”

The idea for the Korean-meets-Japanese dinner was two years in the making, when the Parks dined at SingleThread back in April 2017, not long after opening. “We were so struck by the philosophy that ran through their estate,” says JP. “It was so impressive to us and we hoped we would be able to collaborate with them in the future.” Meanwhile, the Parks launched Atoboy in 2016 followed by Atomix last summer. (The latter earned MICHELIN-star status in the 2019 New York City guide.) With Atoboy now working like a well-oiled machine and Atomix in a steady motion, the timing for this epic meeting of the minds was nigh.

Collaboration—also sometimes referred to as “four-hands”—dinners are increasing in popularity among the chef community, giving staff members an ample opportunity to learn new ingredients and techniques as well as management styles. “Some collaborations are purely chef-driven, but we were intrigued that they were also a husband-wife team and that the emphasis was on the concept and culture-driven cuisine [and] not just a chef-driven restaurant,” JP says, who compares the service style at Atomix to SingleThread. “I think it was a natural identification, if not obvious. We had a lot of fun mixing our different styles and dynamics, and that sort of respect that’s given to both sides of a restaurant—kitchen and service—was very interesting and wonderful.” 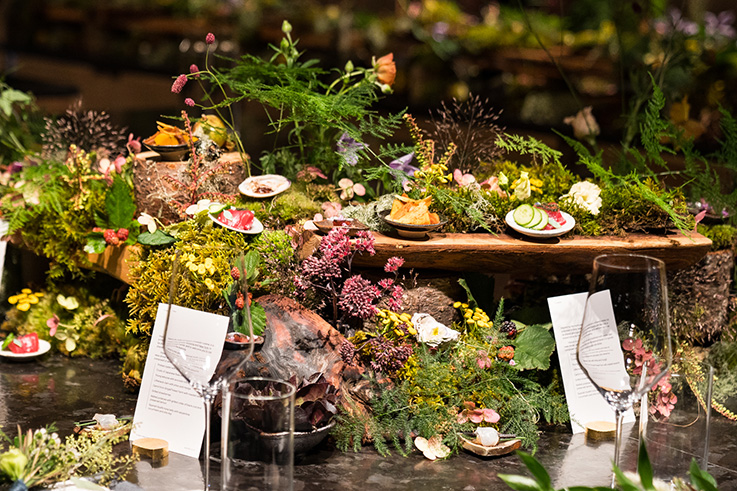 "It's like an Easter egg hunt," says Kyle Connaughton of his array of 'hassun' meticulously placed throughout produce and foliage from SingleThread farms.

“We have such a respect for them and an interest in their cuisine,” adds Kyle. “SingleThread is a California restaurant influenced by our years living and working in Japan. Atomix is a New York restaurant influenced by their years growing up and working in Korea. We were inspired to bring all this together so we could learn from each other and create something truly unique and one-of-a-kind.”

Two seatings for 14 people were held over the course of two nights. To bring the farm’s bounty, the SingleThread team hauled restored wood boards and multiple pounds of produce via several snowboard bags across the country. The menu was constructed to highlight the way that both teams work. The start of the meal consisted of an array of hassun—smaller plates that sets the theme of the Japanese dinner—with dishes including littleneck clam with shiso and myoga, roasted sesame carrots and grilled strawberries courtesy of SingleThread Farms, and malted potatoes with grilled collar of black cod and preserved lemon, among others.

“We shared our own signature philosophies and cuisines,” JP says, noting that many of the ingredients used are cross-pollinated between the Japanese-influenced and new Korean restaurants. “We identified what would make the most sense to showcase from each restaurant and what aspects would pair well together.” 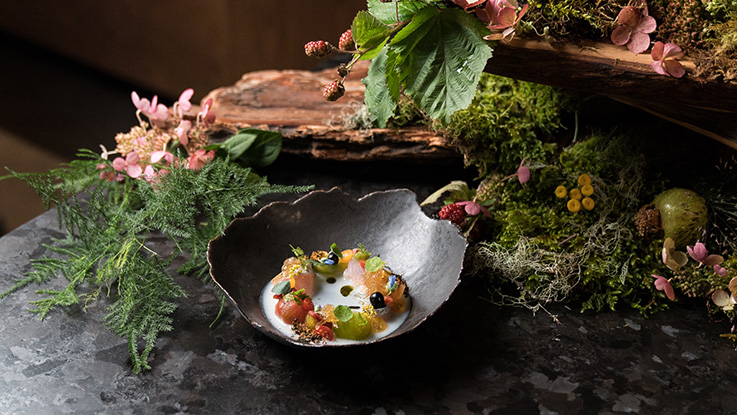 Of the event, Kyle noted the biggest takeaway was the warmth and hospitality of the Atomix team. “They have an incredible spirit,” he says. “In the kitchen, we were so excited to learn their fermentation techniques and Korean style ways of marination over their charcoal grill.”

“What I observed and deeply respected,” adds JP, “was their very apparent love and respect for their team. It was clear that, first and foremost, they value the principle of family on all levels. It was great and warm to witness.”