If you're an adventurous foodie, there's no better time to head to Japan as fugu specialist restaurants are just starting to open again.

The thin slices of sashimi lay in a perfect circular fan on a ceramic plate. Dainty bowls of chopped chives, radish grated with chilli, ponzu and soya sauce lay at its side. As innocuous as the entire setup looks, eating the sashimi at an unlicensed restaurant could kill you.

This is blowfish, or fugu as it is known in Japanese – a cold-season fish that contains lethal amounts of poison in its inner organs. The fish is considered a luxury in Japan for two reasons: It’s an uncommon delicacy that comes into season at the onset of winter, and only chefs certified by the Japanese government can have it on their menus.

Given the expertise needed, only eight fugu specialist restaurants are given Michelin star ratings, and only one with three stars. Many of these establishments are closed throughout the year and are just starting to open again as October is when the fish starts to come into season. This means that if you're an adventurous foodie, now's the best time to visit the land of the rising sun. Not sure where to go? Here’s what our anonymous inspectors have rated to be amongst the best in the 2016 Michelin Guides for Tokyo, Kyoto and Osaka. 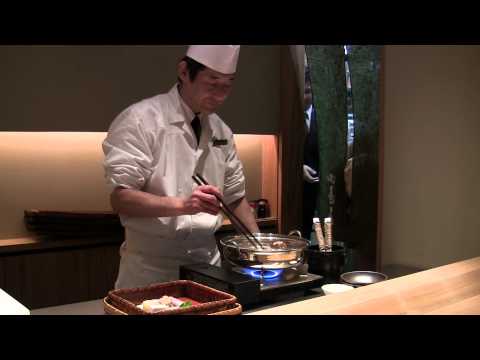 This is a fugu restaurant on Ushizaka in Nishiazabu which opened as a branch of a ryotei in Usuki, Oita in 2006. Thick slices of fugu come with homemade ponzu sauce made from soy sauce and juicy kabosu fruit harvested in Oita. One speciality is a sushi of the local Usuki disho-han -yellow rice coloured with gardenia fruit- topped with grilled shirako. From May to August there is also Shiroshita flat fish or stonefish kaiseki. B1F, Fleg Nishi Azabu Vierge, 4-11-14 Nishiazabu, Minato-ku, Tokyo.

This family-run restaurant buzzes with action but also comes bathed in homely warmth. The owner-chef uses only firm, flavoursome wild shiro tora-fugu and most diners opt for omakase. Other fugu dishes include grilled shirako with a great aroma, karaage, shabu-shabu, and richzosui with shirako to end with. While fugu is considered a winter dish, here it can be enjoyed up until May. The name’s literal translation is ‘filled with taste’. 3-8-8 Roppongi, Minato-ku, Tokyo.

The omakase comes in two types: fugu kaiseki and fugu ryori. If you are looking for chiri nabeand zosui, we recommend the latter; the former is made up of several dishes that include fugu, like nikogori and nanbanni. Sashimi is cut thick and placed on a white porcelain dish. The speciality is the zosui; the rice is cooked in stock to fully absorb the flavour of the fugu. There are separate entrances for the 1st and 2nd floors. 6-11-11 Akasaka, Minato-ku, Tokyo. izumi-akasaka.jp.
Advertisement
Advertisement 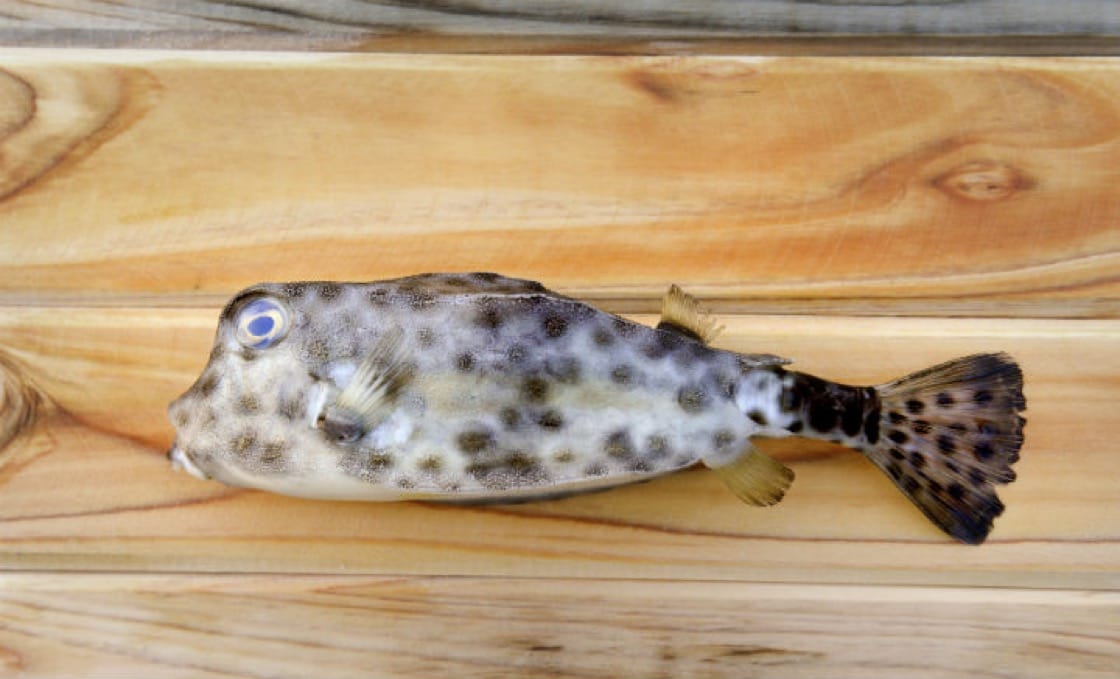 Fugu is easily recognisable by its black spots. In its natural habitat, it inflates like a balloon to nearly three times its size as a defense mechanism.
Kitahachi

Kiichi Kitahama believes fugu dishes are the origin of Japanese cuisine and is chairman of the Japanese Fugu Society. He may be in his 80s but he prepares the food every day. He uses 20 or so techniques passed on from his father, as well as scientific findings made from studyingfugu. There are dishes that can be eaten only here, such as fugu skin prepared in 5 layers and beautiful nikogori. The adjoining fugu museum is worth a visit. 24-14 Gokenyamachi, Kishiwada, Osaka.

The owner-chef is the founder’s grandson; he trained at a famous fugu ryotei but also learned to identify quality fugu at the market. He orders rare natural fugu weighing more than 5kg. First comes fugu skin pickled in ponzu - a secret family recipe. In early spring, shirako chawanmushiis popular. The tetchiri with shirako in stock comes in a pot that has absorbed fugu flavour over years — the mark of an established restaurant. 1-15-5 Yunagi, Minato-ku, Osaka.

The second-generation owner-chef runs this restaurant with his wife who is a certified sake advisor and sommelier. Most seating is in private rooms, some with tatami flooring and others with tables. The main offering is tora fugu, using wild-caught fish from the Bungo Channel and Setouchi. The set menu features extravagant fugu and starts with appetisers. Fugu is available from October to May. Hamo dishes are served in summer. 1-8-5 Sonezakishinchi, Kita-ku, Osaka. 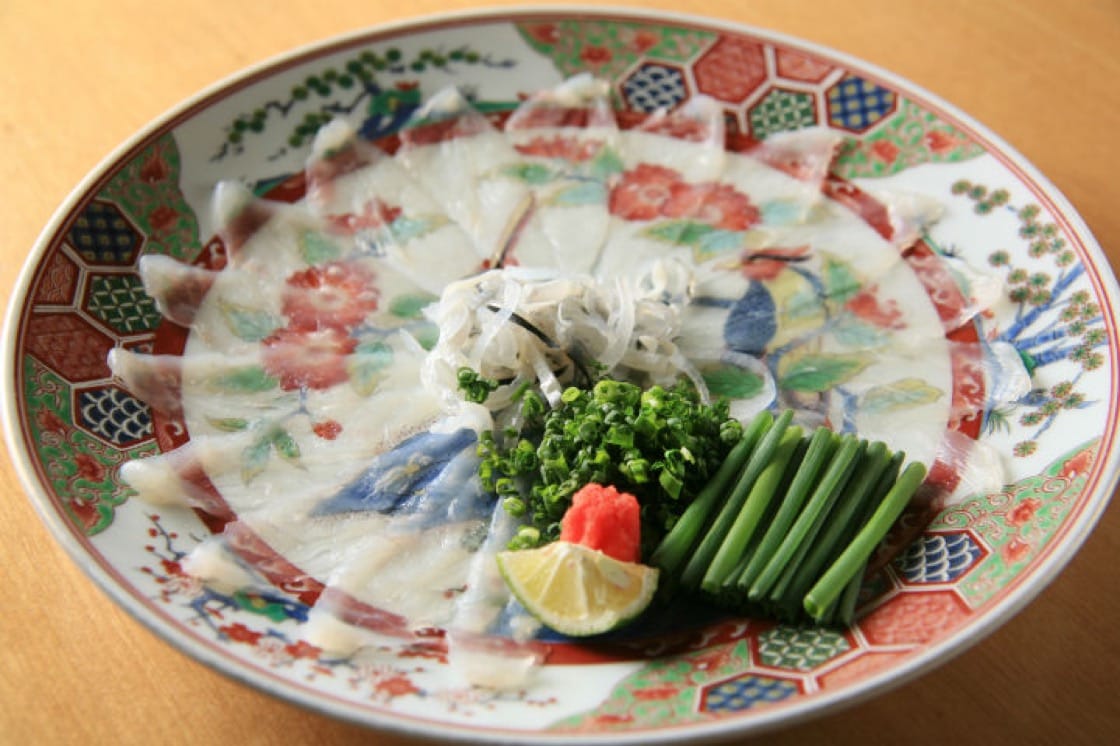 Fugu sashimi is often served with chives and radish grated with chilli.
Igarashi

Founded in the early Meiji period as a catering business, Igarashi became a restaurant in the 1960s; the third-generation owner-chef is now in the kitchen. He uses only ocean-caught tora fugu and his speciality is grilled fugu - the aromatic whisky soy sauce marinade is flavoursome but for non-drinkers, we recommend it with Saikyo miso. After tetchiri featuring kombu dashiand Chinese cabbage comes a tasty fugu soup. 295-4 Ishibashicho, Chioninmae Higashi iru, Higashiyama-ku, Kyoto.

The owner-chef says he wants to capture the whole taste of fugu. Wild tora fugu is aged for several days to draw out the flavour, so reservations should be made at least three days in advance. The sashimi is cut thick and is garnished with salt for a light and subtle taste. Collagen from the skin is added to the nabe for added flavour. The dashi-free ponzu is matured for two years before filtering out the upper layer to give it roundness. Kitaoji-dori Senbon Higashi iru Kitagawa, Kita-ku, Kyoto.