How Japanese anglers and chefs prepare their fish for superior quality.

What is Ike jime?
Ike jime is a Japanese fish preparation method that paralyses fish and drains them of blood. When done correctly, it not just preserves the fish’s flavour and texture but also allows the flesh to develop an umami dimension when aged.

“Ike Jime is a multi-series steps of controls and these steps are designed to mitigate all the effects of biochemical reactions,” says Andrew Tsui, president of the Ike Jime Federation.

The steps he refers to involve disrupting the brain and the spinal cord. Such techniques are said to have developed some 350 years ago, and Japanese chefs have been using this technique since. After all, key to good sushi and sashimi is in ageing the fish, allowing the enzymes to break down and moisture to evaporate, resulting in a concentrated flavour.

Despite its Japanese origins, more and more chefs around the world have been taking on the technique and using it in interesting ways. Alexandre Couillon of two-Michelin-starred La Marine in coastal France is one such, hailing the technique for producing fish that tastes as pure as it looks.

In Singapore, we have chef Dannel Krishnan, alumni of one-Michelin-starred Bacchanalia and now at Kite who uses it in his kinilaw dish. It’s a Fillipino ceviche where he seasons aged snapper from a local farm with punchy tropical flavours like calamansi, ginger and chilli. 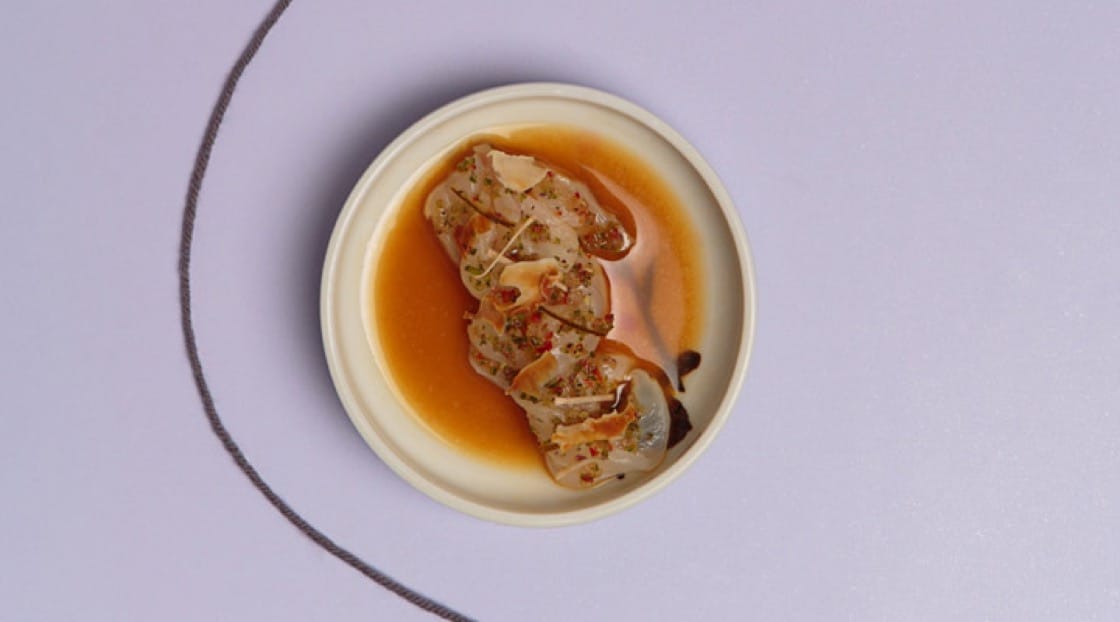 “There isn’t much difference when we cook a fish with and without ike jime on the first day itself when it’s still fresh,” he explains. “The difference comes in only in the third, fourth and fifth day of aging. The fish that’s prepared by ike jime is still firm, and the flesh is pearly. The one that’s not becomes mushy.”

The science of ike jime
The principal is simple: The less trauma a fish suffers before, during and after slaughter, the better the quality of the meat. That’s because as a fish struggles and faces stress, it produces lactic acid and cortisol, which in turn lowers meat quality. Disrupting the brain and spinal cord swiftly minimises the stress signals that are sent out.

Step 1: Close The Fish | Illustration by: Siow Jun
Step 1: Close The Fish
‘Closing the fish’ is a humane way of referring to the act of crushing the brain. To do this, locate the brain (above the fish’s eye) and use a spike to break through the skull. If successful, the fish is said to shudder and its jaw will drop open. Ensure this step is done swiftly so the brain does not have a chance to fire stress signals to the rest of its body.

Step 2: Cut The Gills and Tail | Illustration by: Siow Jun
Step 2. Cut The Gills and Tail
The gills are where the major blood vessels are, and cutting it lets the blood drain out later. Making an incision towards the tail is also vital in locating its central nervous system for the next step.

Step 3: Severe the spinal cord | Illustration by: Siow Jun
Step 3. Severe The Spinal Cord
Push a sharp wire into the spinal cord and run the tip along the upper side. The fish will tremble as you go along the spine and once it stops moving, the process is complete. This step is vital as it destroys the nervous system, preventing the fish from sending out more stress signals.

Step 4: Let it bleed | Illustration by: Siow Jun
Step 4. Let It Bleed
“The most crucial part is the bleeding because the fishiness and the bad flavours are in the blood,” says chef Dannel. To do so, simply leave it in ice water, preferably in the waters it was raised in, with its head facing down where possible. Experts believe the entire process should be done swiftly and key to success is in being able to bleed the fish quickly so none of the blood gets to the muscles.