Restaurant Petrus has got many things going for it.

Ever since its opening in 1991 on the top floor of the Island Shangri-La, Hong Kong, it has perched high above the city offering breathtaking views of the Victoria Harbour. Thanks to its enviable location, its 30 years of history and its grand setting modelled after the a Parisian salon, Restaurant Petrus has come to be recognised as one of the most iconic French restaurants in Hong Kong over the years.

But chef Uwe Opocensky, who has been leading the Restaurant Petrus culinary team ever since he was appointed the hotel's executive chef in September 2019, is not resting on its laurels. Opocensky does not want Restaurant Petrus to be just an iconic venue — his goal is to make it one of the top three restaurants in the city.

To do this, he plans to reinvent the restaurant, he says: "With any brand, at one point, it's about reinventing and rejuvenation. If you don’t reinvent, you become the past."

“Petrus has been in Hong Kong for many years. It has got a well-established reputation, an amazing wine collection, and has accumulated vast knowledge in the service team,” Opocensky elaborates. "There is great potential in Restaurant Petrus. That's why I am moving forward — I am bringing my vision and creativity to Restaurant Petrus so that we move into the present and into the future."

READ FURTHER: First Day We Got Our Stars: Uwe Opocensky

Telling the story behind the produce

Before joining Island Shangri-La, German-born Opocensky had a career that took him around the world. He has worked under celebrity chef Anton Mosimann in London, did a 6-month stage at Spain’s famed El Bulli, and later worked at hotels in Cyprus, Malaysia and Hong Kong. Widely known as a progressive chef, one modern update he is bringing to Restaurant Petrus can be immediately noticed from the brevity of its menu. What was once a multi-page tome has since been a single, minimally designed page. Most of the dish names comprise only one word: the name of the star ingredient.

The dish named “Prawn”, for instance, heroes a grilled Spanish red prawn dish served with garum, a fermented fish sauce, and grilled bread. The pared down naming convention is a deliberate move to cast the spotlight solely on the ingredient. 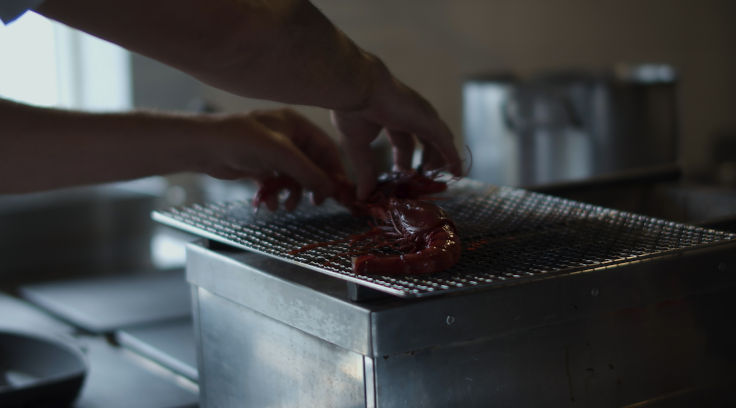 Opocensky gets his Spanish red prawns from a fisherman he met when he worked at El Bulli and with whom he has kept the relationship since.

“As you mature as a chef, you realise how important the ingredients are. The role of a chef is the middleman between our producers and the guests, and we are only enhancing what the producers already give us.” Opocensky explains as he shows us how he cooks the Spanish red prawn.

The prawns — prized for their generous size and their sweet and succulent flesh — are imported directly from a fisherman that he got to know from the time when he worked at El Bulli and with whom he has kept the relationship since. Restaurant Petrus is the only restaurant in Hong Kong that sources this spectacular prawn from this fisherman.

“We just grill it very simply, where I just apply heat to an already perfect product, and tell the story to the guest. To me, that’s the most beautiful part about cooking.” 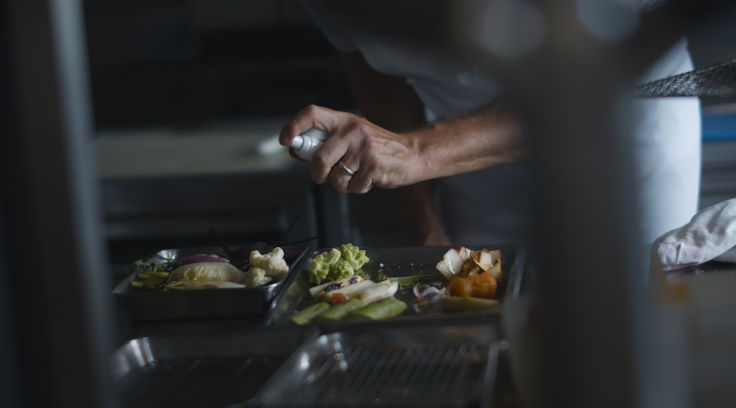 Opocensky works with a local forager and a local organic farm to bring seasonal local produce to Restaurant Petrus.

Sustainability is another focus that Opocensky brings to Restaurant Petrus. As a board member of Food Made Good, a UK initiative that drives sustainability awareness in the F&B sector, Opocensky has actively implemented sustainability practices within the restaurant and the rest of the hotel. The practices they have since adopted include recycling waste products, reducing the use of plastics, and working with the World Wide Fund for Nature (WWF) to source sustainably fished seafood.

“In today’s world, sustainability plays a vital role in what we do. Sustainability comes in many different forms. For me, it’s more about supporting artisanal producers, making sure there’s heritage behind it, there's craft behind it,” Opocensky says. “It’s very important for Restaurant Petrus to have this connection, to know exactly where the ingredient comes from and bring the story to the table.”

RELATED: What the MICHELIN Inspectors Say About Petrus? 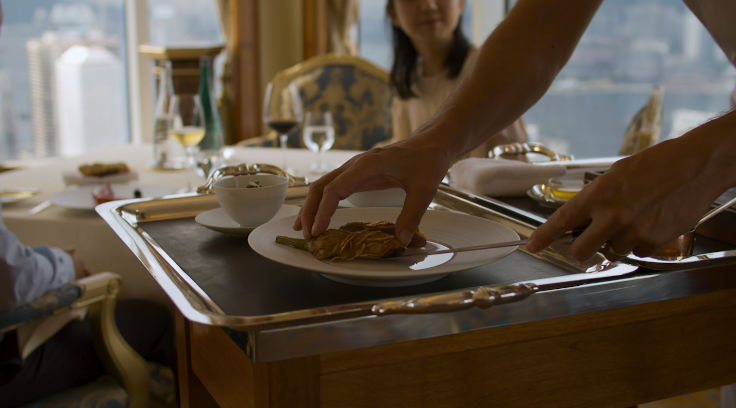 The pigeon is being cut in half to reveal the succulent pink flesh in front of the diner.

A 'little bubble of experience'

But food is not the only aspect of the restaurant that Opocensky hopes to influence with his vision. As a chef who keeps his fingers on the pulse of the global fine dining scene, Opocensky believes that fine dining has fundamentally changed.

He explains: “We are now more and more removed, doing everything via emails and Zoom that take us away from human interaction. So it's good for us to come out and tell our stories. We take people away for an hour or two hours from their normal life, and put them into a little bubble of experience where they can enjoy delicious food, amazing wine, and the company of who they are with."

This is why Restaurant Petrus hopes to revive the theatricality of the guéridon service, or tableside service.

A smoked salmon course is served in a glass dome that is lifted next to the dinner table to let its aroma entice the room. Potatoes are halved and decadently topped with aged caviar and Hokkaido cream tableside. In a signature dish, Pigeon and Artichoke with Barigoule and Watercress, potato layers fashioned to resemble an artichoke are sliced open in front of the diner, revealing a surprise peek of the succulent pink flesh of the pigeon encrusted within. This tableside interaction between diner and service staff has brought smiles to many faces, says the chef.

“Human interaction is what dining has to offer now, and more and more so for the future,” Opocensky says. 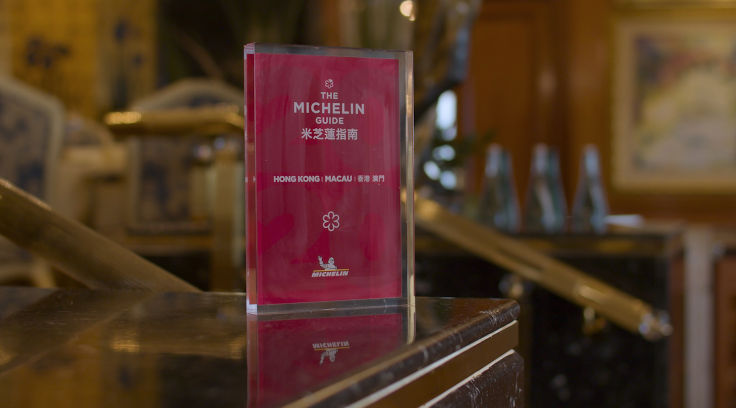 While his short-term focus for Restaurant Petrus is to pursue improvement with every menu, Opocensky says he has grand long-term aspirations for the restaurant.

“Petrus has been a very iconic restaurant in Hong Kong for many, many years. We have started on a great journey of the old, the new, and of who we are today," Opocensky says.

“We are very lucky to have received a MICHELIN star. The ultimate dream for every chef is to get three, and that’s my dream. And that’s what I’ll keep pushing for.”