Shugetsu: A Tale of Dedication

Digging into tsukemen (cold ramen noodles) was not common in Hong Kong up until a few years ago.

It was 2012 when tsukemen specialist Shugetsu opened its first overseas branch here. “In the beginning, not many people knew about tsukemen, and we were worried about the business. But it got better gradually. Thinking back, we can say we brought the tsukemen culture to Hong Kong,” notes Yoshihiro Takashima, Shugetsu’s executive chef with pride. 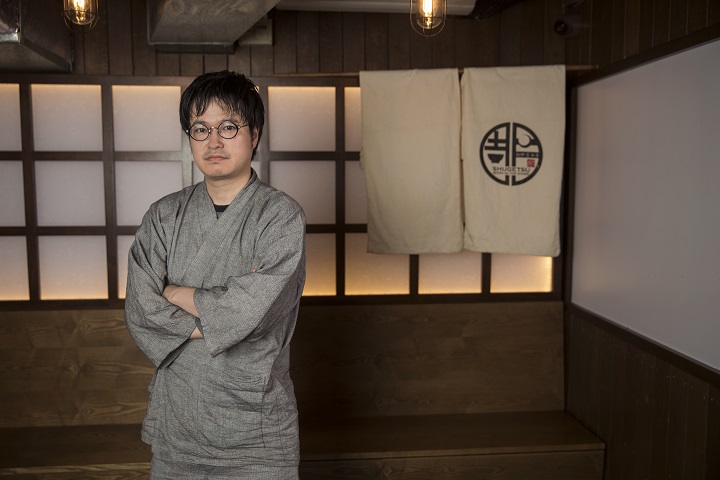 The dipping sauce in tsukemen is considered the soul of the dish. In Japan, it is usually made in two styles. The first is inspired by the style of Taishoken which adds vinegar and sugar in the broth. The other, invented by Ganja, uses copious pork bones and fishmeal to conjure up a thick broth that became popular in recent years.

Yet Shugetsu crafts its own path. Its dipping sauce is based on a rich homemade chicken stock, chilled overnight and simmered with soy sauce, Japanese vinegar, fish powder made from sardine and tuna and other ingredients for half an hour for an intense flavour and a silky consistency. According to Takashima, the quality of the soy sauce can make or break the broth. That’s why he went to great lengths in sourcing the soy sauce that complements his recipe the best, the one made by Kazita from the Ehime Prefecture with 140 years of history.

“The modern production method prioritises efficiency. A bottle of soy sauce can be made in just three months. But Kazita insists on the traditional way to use century-old wooden barrels during fermentation. It is completely handmade with organic soy beans. No additives are added; simply wheat, salt and water. The whole production process takes 18 months,” says Takashima.
Advertisement 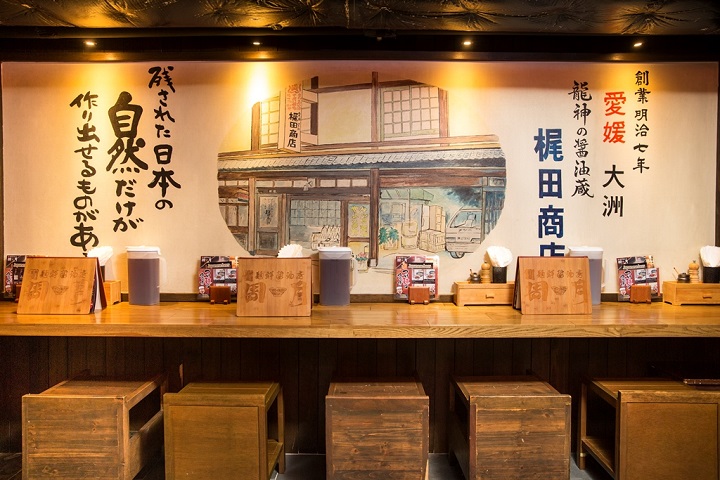 The interior of Shugetsu features a drawing depicting the shop front of Kazita from the Ehime Prefecture.
The soy sauce from Kazita is packaged and sent to Hong Kong right after it is made. The sophistications in its taste yield a tsukemen dipping sauce with unforgettable aroma. Taking the dipping sauce to another level, Takashima adds scallop oil for extra umami. Its vivid character can’t be found elsewhere.

“I make the scallop oil myself to elevate the flavour profile of the dipping sauce. It’s my secret weapon,” Takashima explained.

The Noodles That Stay on Top

Takashima doesn’t compromise the noodles either. Like the dipping sauce, he developed the recipe personally by mixing two kinds of Japanese flours. As a result, the noodles come off springy and stand up to the sauce well. Furthermore, they are freshly made in store using the same machine as in the flagship restaurant in Japan. Takashima said these are the significant elements to ensure the noodles are consistently of high quality, arriving on diners' table perfectly al dente. 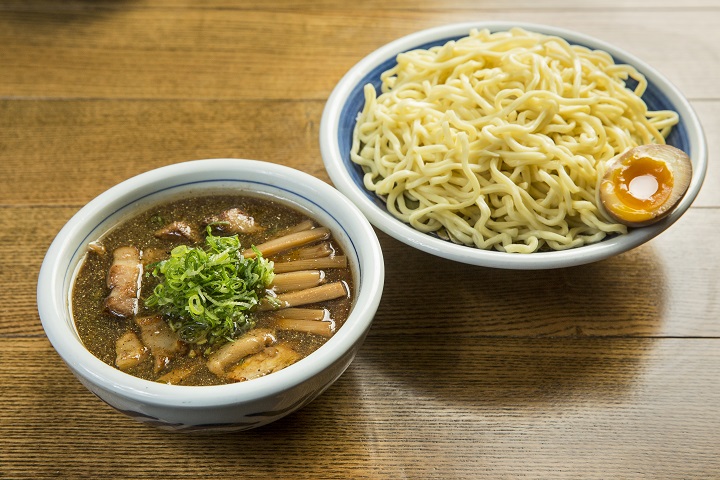 Tsukemen has always been the signature item in the shop.
With Concentration Comes Reward

Takashima has always wanted to recreate Shugetsu’s signature tsukemen in the Japan flagship. Initially, he received mixed feedback from the patrons about the dish being “too rich” or “too salty”. But he never wavered.

“We got many criticisms five years ago because diners in Hong Kong consumed tsukemen like traditional ramen. They had the noodles and the dipping sauce at the same time. Actually, you need to pour in chicken broth to dilute the sauce after finishing the noodles, then you’ll realise the sauce is not too rich," says Takashima.

He continues: "On another note, many Hong Kong people have a lighter palate than Japanese when it comes to ramen. It makes sense that it took them more time to adapt to the original flavour."

His dedication paid off when Shugetsu was selected as a Bib Gourmand Restaurant for four consecutive years.

“I’m confident in myself. I made sure the tsukemen I produce here is on par with the standard of Japan, and through it all I gave additional considerations to the local climate and humidity. The restaurant owner in Japan and I were very happy to know Shugetsu became a Bib Gourmand Restaurant. It’s unbelievable!” exclaims Takashima.
Advertisement
Advertisement