In this two-part series, we trace the trajectory of these two restaurants’ journey to becoming three-Star restaurants. 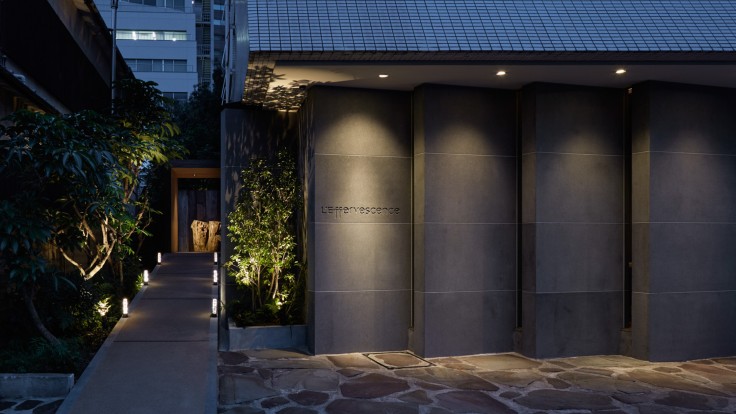 L’Effervescence opened in 2010 in Nishiazabu, a residential area in Tokyo. The venue's deliberately unfinished concrete aesthetic adds to the stylish appearance of this restaurant. In French, L’Effervescence means “foam”, “crowd”, and “lively” and the name was created to evoke mental images of people rushing into an empty space, with the energy of countless bubbles gushing forth from seemingly nowhere. 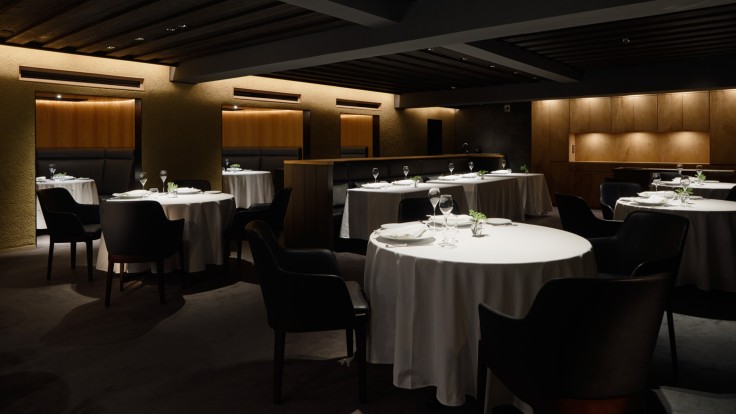 The interior of the restaurant harmoniously blends Japanese and Western elements — while it bears a distinctly Western aesthetic, there are also influences of traditional Japanese craftsmanship on display, such as the Awaji soil wall or the use of Yakisugi wood. The private room in the basement features a tea room-style clay wall and windows, while Japanese-style candles burn on table tops. 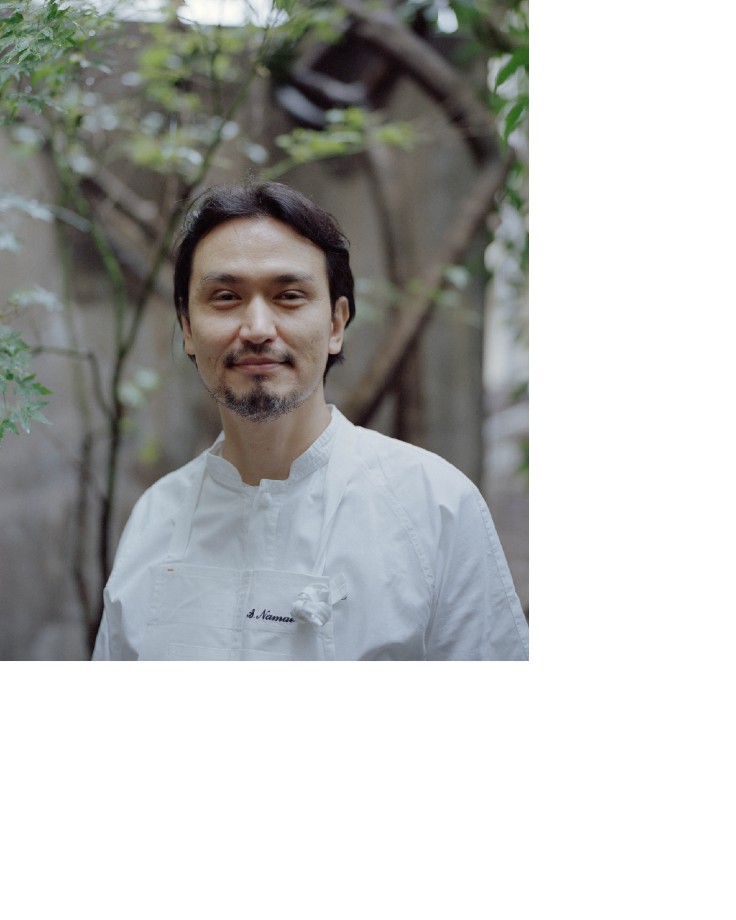 Born in Kanagawa prefecture in 1973. L'Effervescence's chef-owner Namae Shinobu, who has led the restaurant since its opening, didn’t enter the culinary world right away.

Instead, while at Keio University, chef Shinobu dreamt of becoming a journalist while also being a member of a rock band. It was during this time, however, that he had his first encounter with the culinary world while working part time at a restaurant. He was further inspired by a recipe book by Michel Bras which led him down the path of French cuisine.

He later honed his skills while working in the kitchens of Michel Bras’ restaurants in Toya in Hokkaido and Laguiole in the south of France and also worked as a sous-chef in the restaurant ‘The Fat Duck’ in England.

In 2010, he opened L’Effervescence to showcase how he incorporates inspiration from the natural world into his dishes, gaining his first MICHELIN star in 2012, followed by the second star in 2015.

READ MORE: These Are The Newly Starred Restaurants In The MICHELIN Guide Tokyo 2021 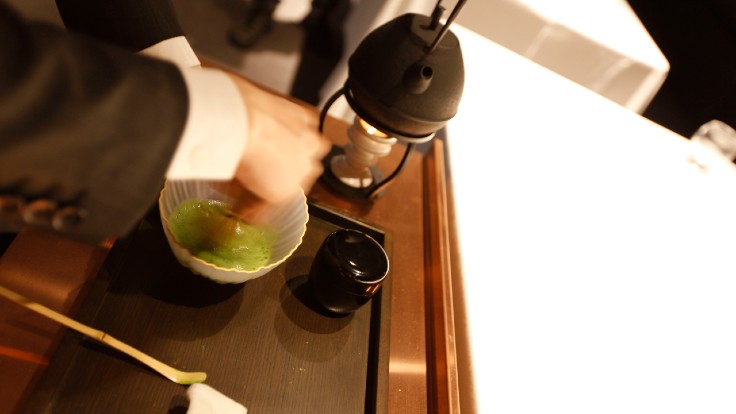 There is only one set menu — deliberately designed as such so that the chef and his team can devote all their imagination and energy to every dish on the menu. Using only locally grown ingredients, his credo is to ‘keep it Japanese’.

The Japanese-style hospitality is evident throughout the dining experience: the ‘Ikkonn’ (cup of sake) amuse-bouche that starts off the meal pays homage to the spirit of the Japanese tea ceremony, while the restaurant's precise attention to detail and diners' needs can be seen in the exquisite timing when serving the risotto course — just on the verge of it being cooked, in order to ensure that the rice retains a high moisture content. The ‘Teiten’ turnip dish is a L'Efferversence speciality that has been served since the restaurant first opened, and remains a hallmark on every iteration of the menu.

This is also why teamwork and a deep camaraderie between his staff is important to him. The restaurant's customer service, led by restaurant manager Aoshima Sousuke, is cheerful and creates a comforting environment. Little details such as having staff wear name tags on their chest create a sense of closeness between staff and diners.

“When I first opened the restaurant I didn’t have a clear vision, but I have maintained the conviction that daily pondering over things leads to great gains.”

After the meal, customers are treated to a cup of usucha. By giving a Western presentation to traditional Japanese chakaiseki, the chef has expressed his unique outlook on the world that summarises the entire dining experience at L'Effervescence. 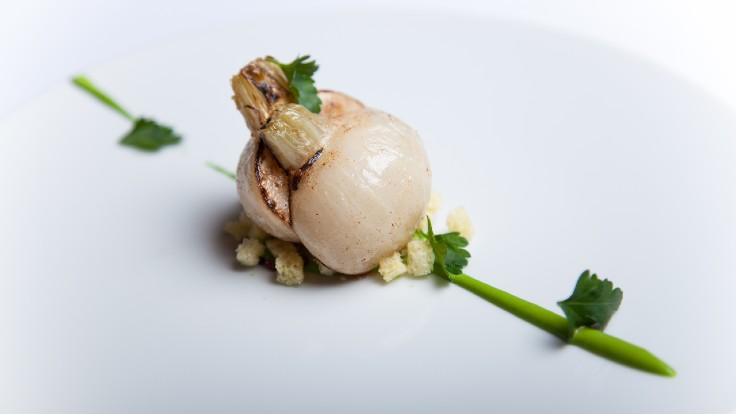 In addition to the accomplishment of gaining three Stars, the restaurant was also selected for the newly introduced MICHELIN Green Star distinction in the MICHELIN Guide Tokyo 2021 edition — a nod to chef Shinobu's deep knowledge of sustainability and his adoption of environmentally and socially friendly initiatives in various aspects of his business.

For Shinobu, the most important thing is to create a connection between every person involved in the food chain. “We do this by making sure everything in our restaurant reflects the stories and traces of their existence. For example, there is one person who does the food preparation, while another grows the ingredients. Our role is to shape excellent ingredients into dishes and convey the feelings of the producer to our guests”, he explains. This philosophy can also be seen in how he visits each producer individually and displays their names on the menu.

When asked about his belief in sustainability he said, “The concept is diverse and difficult to explain, but I think it all comes down to caring: caring for people, for the environment, for ingredients and for nature. At the root of sustainability, there is love.” 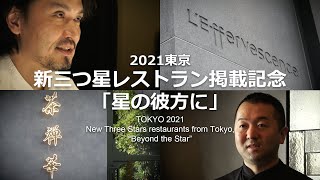 Beyond the Stars: Chef Namae Shinobu of L'Effervescence