“You have the potential to do something that doesn’t exist in Hong Kong that belongs to you,” said Yenn Wong, restaurateur and CEO of JIA Group, to Ricardo Chaneton about the concept of a new venture—now MICHELIN Plate restaurant Mono—that they decided to open together.

Wong was referring to Chaneton’s Italian-Venezuelan heritage. It was no surprise that Chaneton had the idea of focusing on French cuisine at the beginning—after all, he was previously executive chef of French restaurant Petrus, and the longest-serving chef at Mauro Colagreco’s three-MICHELIN-starred Mirazur. But when Wong reminded him of his roots, it was clear to him that the cuisine that is closest to his heart is South American cuisine.

“I was born in Venezuela. My mum is Italian, my grandmother is Colombian, and my grandfather is Argentinian,” Chaneton speaks of his multicultural background. “That’s why I call Mono ‘Asia’s window into refined Latin American gastronomic culture’.”

Staying true to his heritage, Chaneton dedicates Mono’s tasting menu to four key elements: Origins, which honours South American ingredients; Traditions, which pays respect to those he honours; Savoir Faire, a showcase of his classic French training; and Heritage, his memories of home. 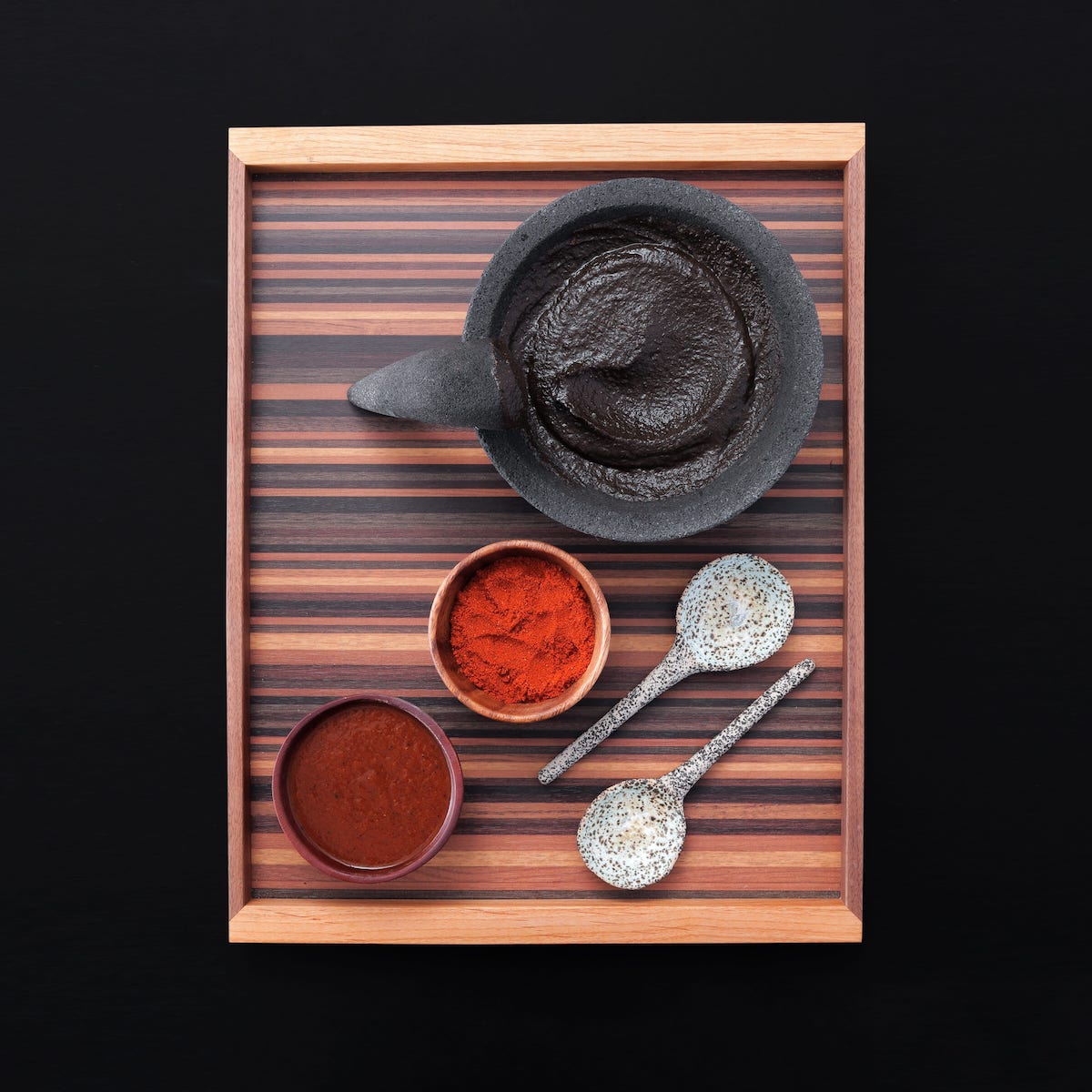 Mono is deeply personal. “We are unique and singular,” he says. “Everything we do at Mono makes sense. I do what belongs to me, which is South American, but with the savoir faire of French cuisine.”

Opening Mono feels like a homecoming of sorts, or what Chaneton likes to call “destiny”. After spending over a decade honing his craft at European restaurants Quique Dacosta and Mirazur, the 33 year-old chef finds himself breathing new life into South American culinary culture in Hong Kong.

We sat down with Chaneton at Mono, where he chronicles his culinary career, and explains the South American ingredients that he incorporates in his cuisine.

When did you first discover your passion for cooking?
When I told my father I wanted to study how to cook, he introduced me to his friend who owned a pizzeria, thinking I may not like it and give up. I was in charge of easy tasks like peeling tomatoes, but it was a high volume job.

I fell in love with it. For me, it’s about the adrenaline of working in the kitchen. I remember I had this uniform that had a lot of oil on it. I remember every day I went home smelling like the frying machine—it’s disgusting but I love it. I love the fact that I had my hands on something had to push hard every time.

When did you first hear about the MICHELIN Guide?
I used to work with a now famous chef called Luis Martinez in Venezuela. He came back from Spain where he did an internship at a two-MICHELIN-starred restaurant. I always heard him talking about the MICHELIN star and the molecular cuisine in Spain. I thought it sounded exciting.

Which restaurant has the most influence on you?
Quique Dacosta is a restaurant that marked my life forever. I started as an intern dish washing at the restaurant. It was amazing—that adrenaline, sensation, and feeling to always push harder.

Then I became the chef de partie, capo (“boss” in Spanish, referring to chef Quique Dacosta) and I had a beautiful relationship. It was brotherhood. I remember when Venezuela was in a bad state, capo invited me to spend Christmas with his family in Barcelona, when the restaurant was closed in December.

He taught me how to cook fish and how to feel fish and seafood—something he didn’t show anyone else. He always said, “ Fish and seafood are a way of life.” When I left Quique Dacosta, he bought me a train ticket to France—it was a beautiful gesture from him. 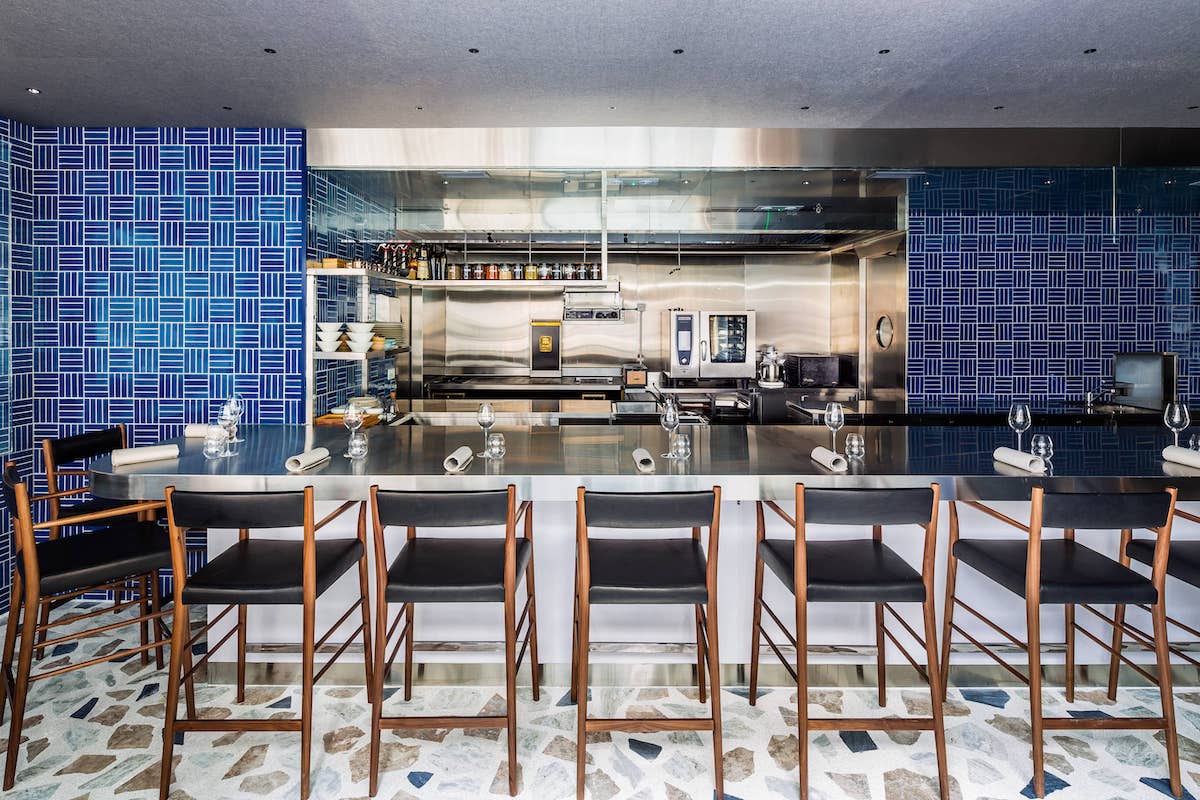 But if people ask me “How many restaurants have you worked at in your career?” There’s only one—Mirazur. When I joined Mirazur, it had one MICHELIN star. I started as chef de partie, and was in charge of the kitchen and garden. Every morning I had to go to the garden to pick up all the herbs and vegetables that the chef wanted.

One of the things that marked me the most was Mauro Colagreco saying to me “Welcome to Mirazur” in Spanish, “From now on, we won’t speak Spanish anymore.” From that day, I started trying to learn French. Try is very important—it may sound ridiculous, but try is the key to achieve any outcome. Within three months, I could understand and communicate in French.

At that time, Mauro was already one of the most well-known non-French chefs in France. When two of his French chefs were leaving Mirazur, he said to me: “We have changes in the kitchen and I count on you.” One time he got an invitation to Venezuela to do a cooking demonstration at the Congress of Gastronomy. He asked me to go with him. I arranged his whole itinerary, and planned an amazing trip for him and his family. During that trip, we became even closer.

I started at Mirazur as chef de partie, and finished with what my ex-wife used to say “wife of Mauro” (chuckles). At a certain point, I was the consultant chef of Mauro Colagreco Consulting, his assistant who planned his travel schedule and logistics, and the chef de cuisine of Mirazur at the same time.

In the past, Mirazur would close three months a year in winter. All the chefs would leave after nine months because they had a 9-month seasonal contract. But Mauro gave me a full-time contract that included two extra months and a one-month holiday.

When I told Mauro the next season would be my last with Mirazur, he took it very positively at the beginning. Of course, he was a bit in pain towards the end, and so was I. He gave me a farewell gift before I left—the keys of Mirazur. “It’s your last winter at Mirazur. Do your own cuisine.” He gave me the opportunity to open Mirazur in winter—something we had never done before. We didn’t know the clientele in winter, nor were we familiar with the garden’s winter produce.

I had the helm of Mirazur for three months: my menu, my food, my concept. I recruited a winter team from zero, and two of them are still working at Mirazur. Since then, Mirazur opens in winter every year.

“What we do at Mono is within the comfort and palate of the locals, but in a form they have never tried before.” 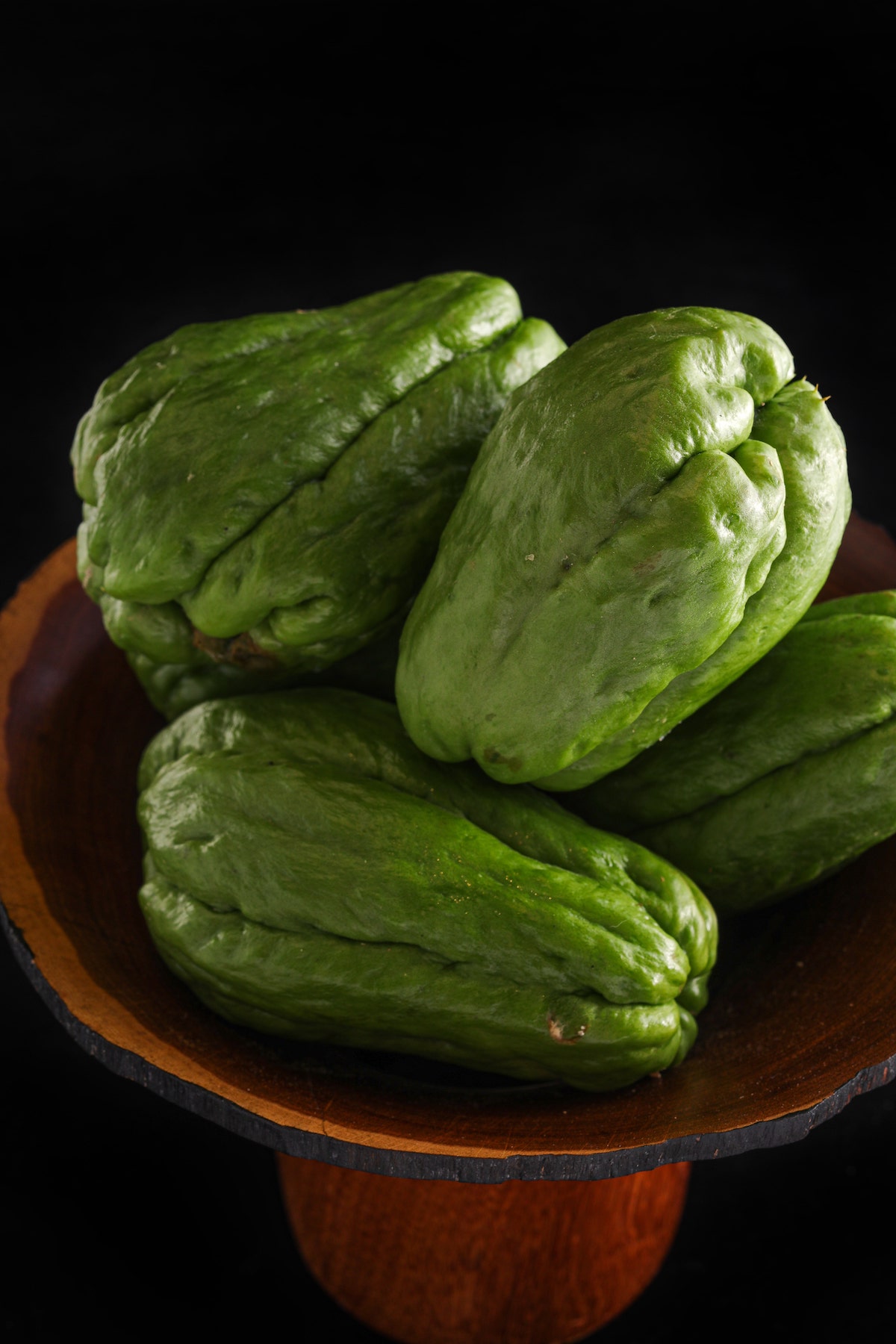 How does Mono bring a taste of South America to Hong Kong?

We fly in produce from South America—some of them are known in Hong Kong as an ingredient but not many people know their history. You have produce like jicama, which I buy locally at the wet market but it’s originated in South America. In Hong Kong, it is mostly used in soup and stir-fried in Chinese cuisine.

Then you have chayote, an ingredient that Hong Kong people are familiar with but they don't know it’s also from South America. What we do at Mono is interesting because it’s within the comfort and palate of the locals, but in a form they have never tried before. I always say Latin American and Chinese cultures are more similar than we think.

At Mono, we focus on the flavour and quality of the produce. Some of them are very exotic, like the cacao pods we import from Ecuador. We are probably the only restaurant in Asia doing not bean to bar, but pod to bar. The cacao variety we use is a cross-breed of Criollo and Forastero. Criollo is one of the most respected cacao in the world but it’s very delicate as it gets sick very easily. It’s very famous in my country—Venezuela is known to have the one of the best cacao in the world. Forastero is very resistant to insects, so the breed we have has a good complexity and aroma but also very resistant. I want to share my knowledge of cacao with our guests. In South America, especially Venezuela, cacao has built many towns—it’s the engine of the economy. 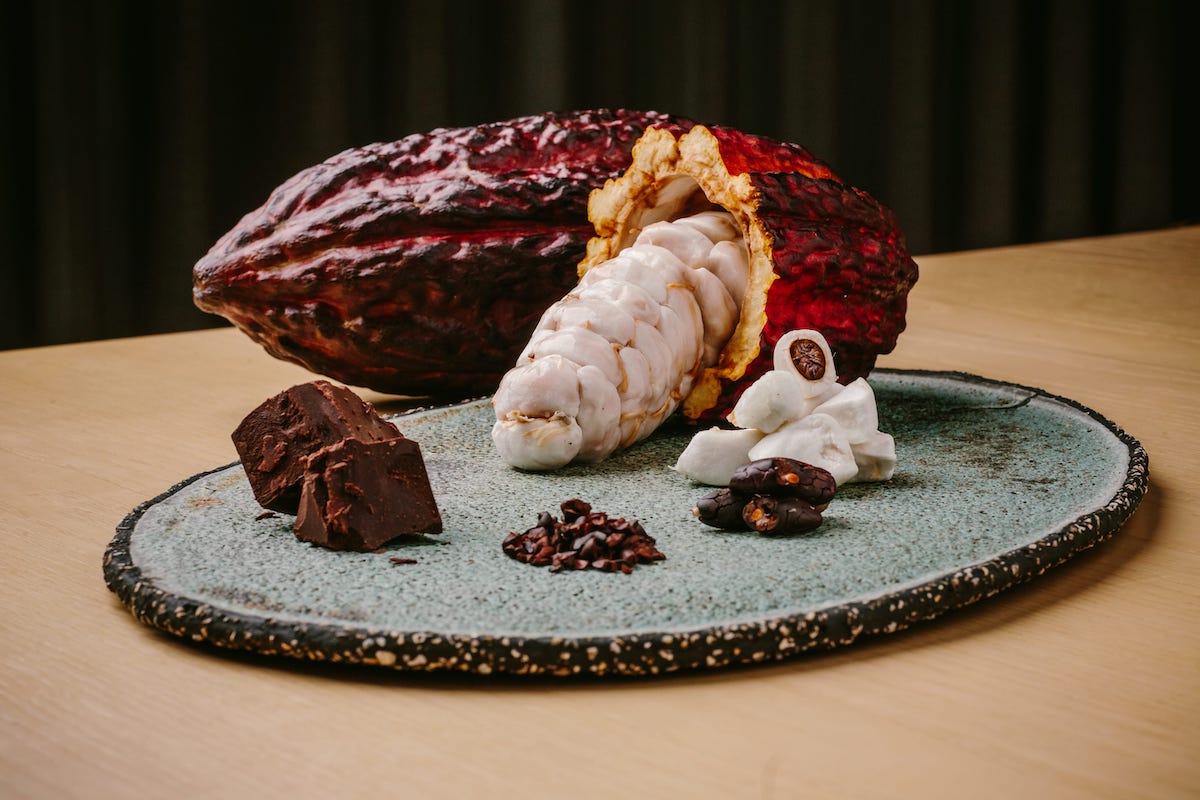 Mono makes its own cocoa from scratch using cocoa pods from Ecuador. (Photo: Courtesy of Mono)

We start with using banana leaves to activate the fermentation of cacao. Fermentation is the language between human and food. After fermentation, we dry the beans and roast them at a high temperature for 18 minutes. Once we peel the skin from the beans, they become cocoa nibs. Then, we roast them again for three to five minutes. We finish with a grinding process that takes around two days. The whole procedure can take up to 20 days, from start to finish.

For our signature dessert, we start with a jelly made from the cacao fruit and a sorbet made from the fermentation of cocoa. The chocolate part comes with our 70% raw chocolate ganache topped with a chocolate “veil”. It is served with a rosemary and olive oil ice cream from Sicily. This is a dish that truly represents my South American and Italian heritage.