The Bocuse d’Or may be one of the most widely-known and highly coveted cooking competitions in the industry. Founded by and named after the late legendary Paul Bocuse, the competition was created in 1987 “in order to broaden the public’s understanding of the extraordinary dedication, hard work, practice and precision required to execute the very finest cuisine,” per the company’s website. Held every other year at the Sirha Show in Lyon, France, 12 chef teams consisting of one lead chef and one commis battle head-to-head over the course of five hours and 35 minutes, preparing a themed meat dish and fish dish. (Denmark took top honors in the 2019 competition.)

Helping train Team USA is Ment’or BKB Foundation, the leading nonprofit organization dedicated to inspiring young culinary professionals. “When I first started, the one program that the foundation focused on was recruiting and training Team USA—getting them on the podium in 2015 and then finally winning in 2017, the best achievements I’ve seen,” says Young Yun, executive director of Ment’or BKB, who has been with the foundation for six years. “When I left the corporate world, I really wanted to get into something that was a way for me to make a bigger impact and to drive change. . . . We have impacted so many individuals and helped them get one step closer to their dream.” 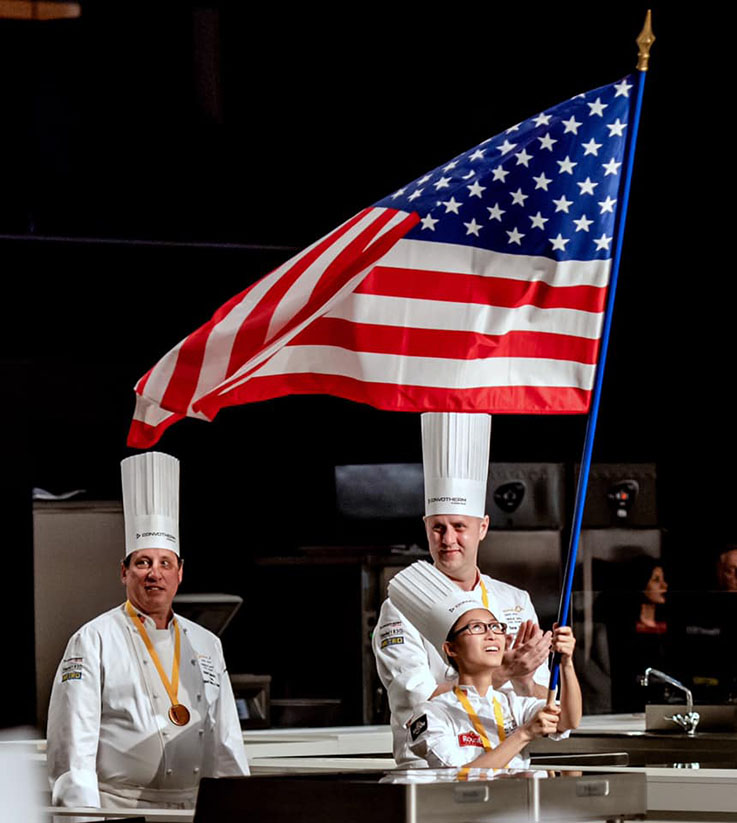 “Just seeing these young cooks—and even people who aren’t cooks in the industry—how involved [they are] with the mentors they have in their restaurants and kitchens, it motivates me and keeps me going to see how many people are inspired,” Yun continues. “That’s what’s so rewarding. I’m amazed constantly at how this is such a community and a family. Everyone wants to help everyone—that spirit is something that is quite precious, and I think it’s something that everyone should really value. The amount of respect that everyone has for each other at all levels is really tremendous.”

A national call for applicants was held earlier this spring, and applicants must meet certain criteria. (Head chefs must be American citizens and at least 23 years of age or older by the 2021 competition date and at least five years of fine dining experience.) “Once we have all applications, we have a committee who reviews [them] and then narrows it down to the best candidates,” Yun says. That committee consists of the Foundation team, including co-founders Thomas Keller and Daniel Boulud, and select candidates move on to in-person interviews and cooking demonstrations. “[It’s] to get a sense of the applicant’s ability for flavor, seasoning and thought process, and how they went about showcasing what they want to present to us,” adds Yun.

Today, the Ment’or BKB Foundation is proud to announce the three finalists competing for the title of Team USA that will represent America at the Bocuse d’or in 2021 are:

These chefs will compete for a spot on Team USA at The Culinary Institute of America’s Copia campus in Napa, California, on November 11.

“It’s a great group of candidates and we’re very excited,” Yun says. “We’re very honored to have any one of them represent our country. It’s going to be fun to see what happens in the next couple of months and what happens on November 11.”

Chefs and the Community
People 7 minutes

wine Champagne
All articles of People