A story of friendship and shared moments

In 2017 young chef Jakob Pintar joined Jurij Osole on the TaBar adventure, the two of them wanting to write a new chapter in the story of the restaurant. Indeed, with Jakob in the kitchens, TaBar's mission shifted from serving tasty sharing plates alongside wines selected by Jurij : it now offers a true fine dining experience, the dishes perfectly pairing with the exceptional wine list, but still with a laid-back approach.

Friends and associates, the pair have been working together seamlessly ever since, with a shared philosophy : to enjoy ! Their ethos is evident in the atmosphere, which is inviting and lively. "We hoped to create a place that reflects who we are, and in which you feel good. We wanted something simple and friendly, open to all, somewhere you'd want to come back to often," explains Jurij. With its long counter, deep benches and room full of communal tables and bar tables, TaBar is naturally conducive to sharing.

A garden as a source of inspiration

If the two friends have one hard and fast rule, it is that they will only use local and seasonal produce. Most of the fruit and vegetables cooked in the restaurant come from Jakob's garden, which is about 20km from Ljubljana, in his village of Šentjošt nad Horjulom. In fact he shares this plot of land with Luka Košir, his brother-in-law, who happens to be the chef from Grič (restaurant with 1 Michelin star and 1 green star).

"I like spending time in our garden, tending our vegetables. It's a very special moment of the day for me, when I can reflect and dream up new dishes with a free mind," says Jakob. In autumn, he also loves to scour the surrounding woods and forests for mushrooms, which will, of course, find their way onto his menu. 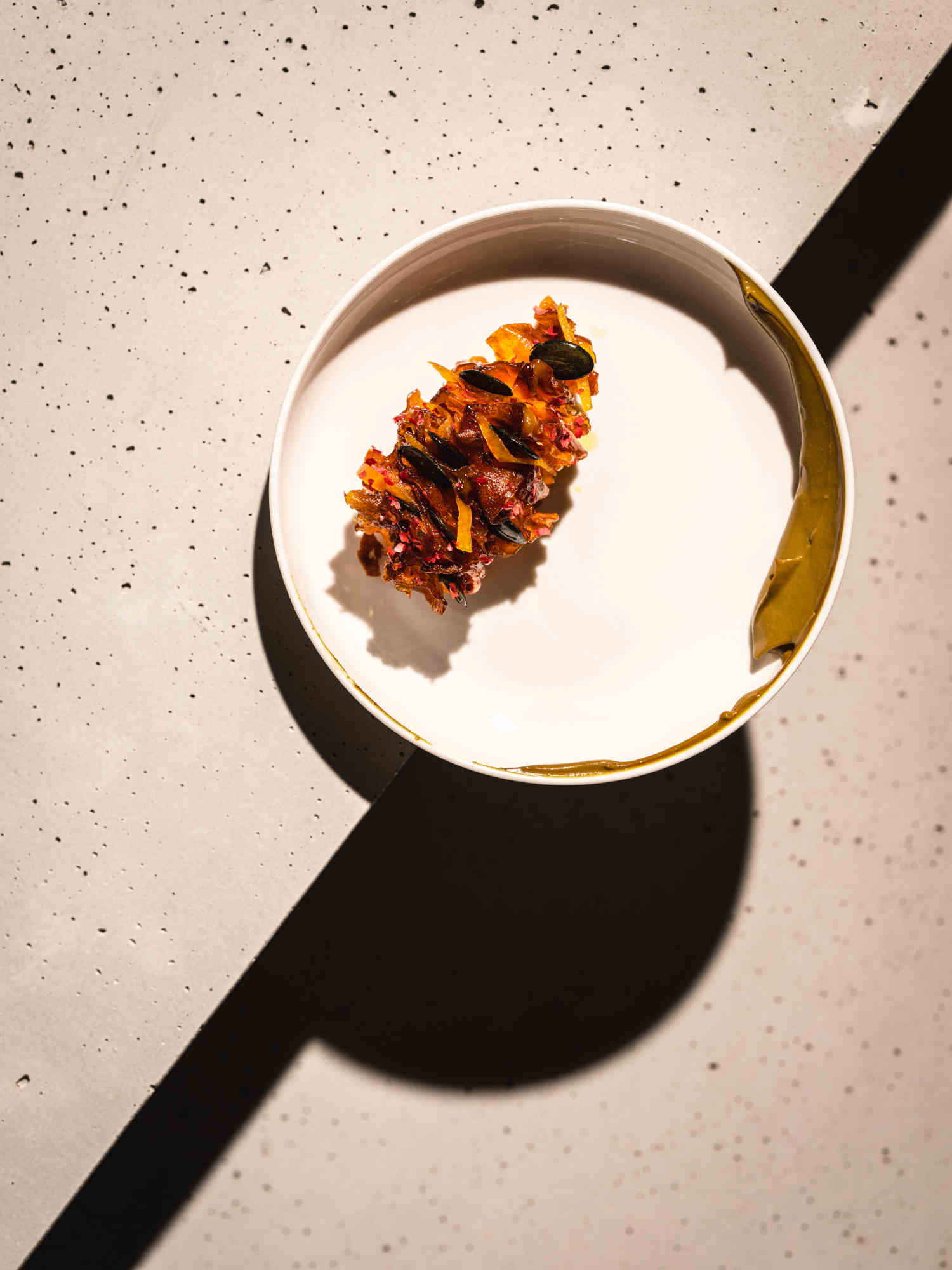 Ties with the best local producers

Jakob Pintar's many partnerships with local producers is another facet of his strong rootedness in the local area. Irena Orešnik, who also lives in the village of Šentjošt, supplies him with a wide range of goat's cheeses that leave no doubt as to her exceptional know-how. Not far away, a trout producer supplies the chef with outstanding quality fish roe. Žgajner Farm reserves its finest cuts of meat for TaBar, and the same goes for Biosing, which produces delectable organic cold cuts, including sausages made from pork, venison and bear meat, which Jakob serves as an aperitif.

The chef also frequents Ljubljana market, where he goes almost every morning. "I like to walk around the stalls to see how the season is progressing. It keeps me in touch with the land”. A familiar face to the traders there, he buys fruit and vegetables from local producers, as well as meat, cereals and flours from farmers, and fresh fish from the Adriatic.

Jakob Pintar's creativity, in terms of his marriages of flavours and the presentation of his dishes, may be undeniable, but his ability to express it is down to his sound mastery of haute cuisine techniques. This expertise was garnered during his time alongside some of the great European chefs : he trained with Joël Robuchon (L'Atelier), worked for Gordon Ramsay (Maze) and then joined the team of Heinz Reitbauer (Steirereck), and it is perhaps the latter who influenced him the most. 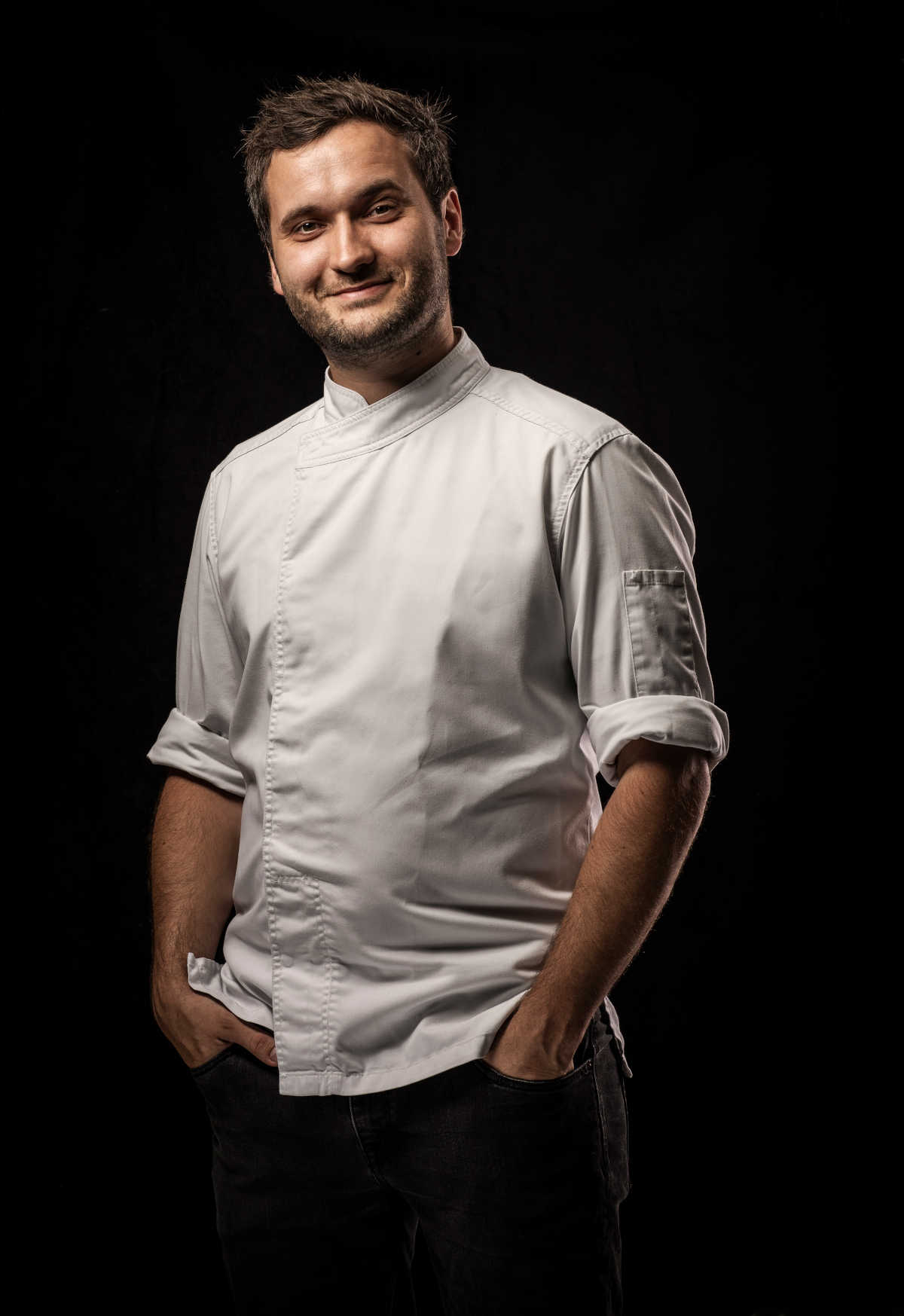 It is therefore hardly surprising that Jakob's cuisine is characterised by a remarkable sense of composition. It sometimes takes on a technical form, while remaining generous and accessible: in short, haute gastronomie and bistro styles converge here. In the space of just a few years, TaBar has become a hub for the new generation of Slovenian chefs and foodies.

Courtesy of his vegetable garden, Jakob also delights in cooking rare vegetables with original flavours. In the summer months, for example, he grows dozens of different varieties of tomatoes. He also makes a point of growing all sorts of herbs and flowers to use in his dishes, but always deploys them more for the palate than the eye.

Ultimately, plants are also what give the chef's cooking its character : take, for instance, the dish in which chervil, kale and bitterleaf salad play the supporting role to an exceptional cheese ; or the dish with bacon – from a Krškopolje pig – livened up with flowers, herbs and spices... Jakob is a fan of original combinations, which not only entice but also shake things up. Of course, the aesthetics of the dishes are often second to none, but it is the savour that must surprise the most.

Some dishes are provocative, such as the homemade beetroot-infused head cheese shaped like a pig's snout... Here, they want to make an impression and break the mould ! The food is in keeping with the image of the TaBar team : young, innovative and edgy. The portions are relatively small, which means you can sample a lot of the menu and get an idea of the breadth of the chef's talents. 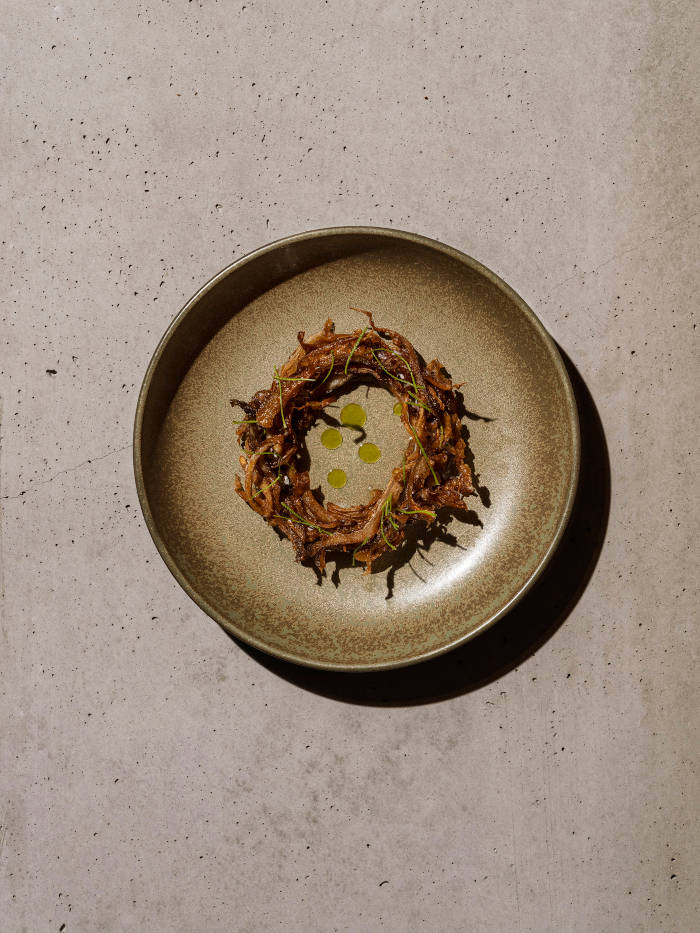 Since TaBar's inception, wine has been part of its DNA. With nearly 200 natural or biodynamic wines - some very rare - the place is a reference point in Europe. Most of the bottles served here are produced in Slovenia, with a few rare forays abroad, but then generally for producers of Slovenian origin. The choice is absolutely astounding : all regions, all grape varieties, all colours and all styles of wine are represented.

Behind this impressive diversity is the meticulous work of Jurij Osole, who has spent many years seeking out the best producers in the country. He keeps an open mind and always favours those who work in harmony with nature and the vines. For example orange wines – or macerated whites – are very well represented. "We consider orange wines to be the closest to the wines of our ancestors. Today, this style has become a real signature for Slovenian viticulture. I always enjoy introducing it to foreigners," he says.

Jurij curates a balanced wine list with both easy-drinking wines and more original bottles. But there are certain principles on which he won't budge: "we are often advised to add a few champagnes and prestigious foreign wines to our selection so as to keep everyone happy. We prefer to showcase our country's countless gems". A choice emblematic of the TaBar mindset : to remain true to its values, come what may.

Budapest Chef Michelin Guide
All articles of Dining Out