Italy has a proud agricultural tradition, and when farmers were struggling to make a living off the land in the second half of the 20th century, they began converting their properties into small hotels and resorts. Thus, the Italian agriturismo was born. Guests at an agriturismo typically get to enjoy meals made from food produced right on site, and many agriturismi offer cooking classes and opportunities to interact directly with the farm, like picking vegetables and milking cows.

One specific type of agriturismo is the masseria, most commonly found in Italy’s Puglia region. A masseria is the fortified farmhouse at the center of agricultural estates that were owned by wealthy land barons in the 16th through 18th centuries. These main houses were where the food and valuables were stored and protected from foreign raiders (including pirates, yarr). Today, the masserie are hands-on hotel experiences that are popping up throughout southern Italy. Puglia is famous for its abundant supply — as you’ll see below — and a trip there really isn’t complete without a stay at one. But you’ll also see them in Sicily and neighboring regions like Campania and Basilicata.

Most masserie retain the rustic charms of their centuries-old roots — that’s kind of the point. Nevertheless, they don’t lack the contemporary comforts and light luxury touches the modern traveler has come to expect. It’s the perfect combination, really.

Though they’re not quite as famous as the classic Tuscan villa or Provençal inn, there’s nothing, in Italy or anywhere else, quite like a Puglian farmhouse hotel. Halfway from the town of Fasano to the beach, set on an estate that dates back to the 17th century, is Masseria Calderisi, a 24-room luxury boutique hotel that makes a strong case for the singular charms of southern Italian country hospitality. 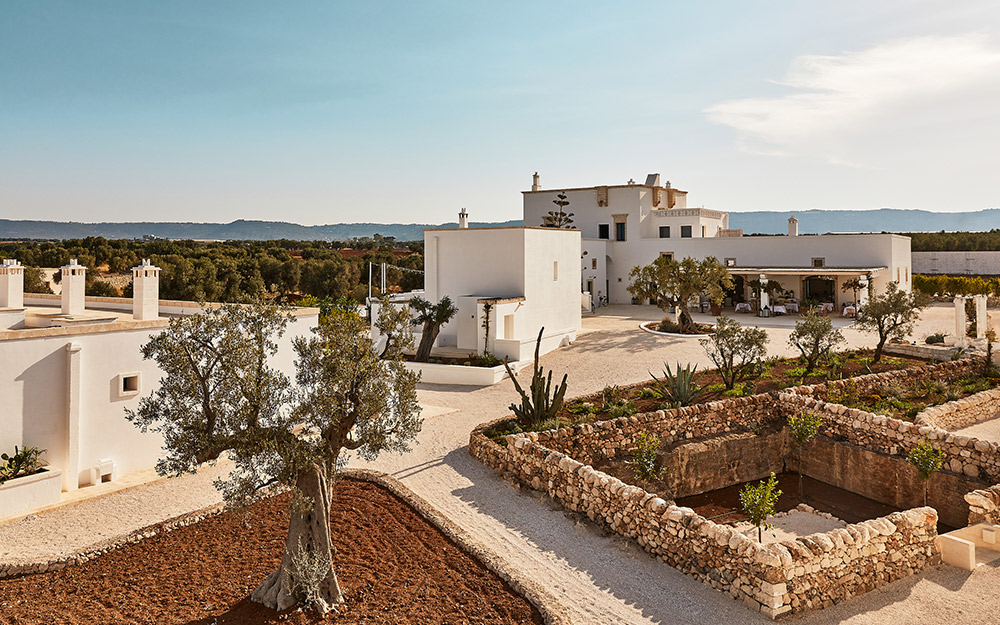 The setting at Masseria Torre Coccaro is classic Puglia: a sun-bleached hillside facing the Adriatic Sea amid groves of olive trees. The view is no accident — the Masseria began its life in the 16th century as a watchtower, a fortified farmhouse, designed as a stronghold against marauding Turks. Today the fortifications are strictly ornamental, and the Masseria’s architecture just adds to the charm. 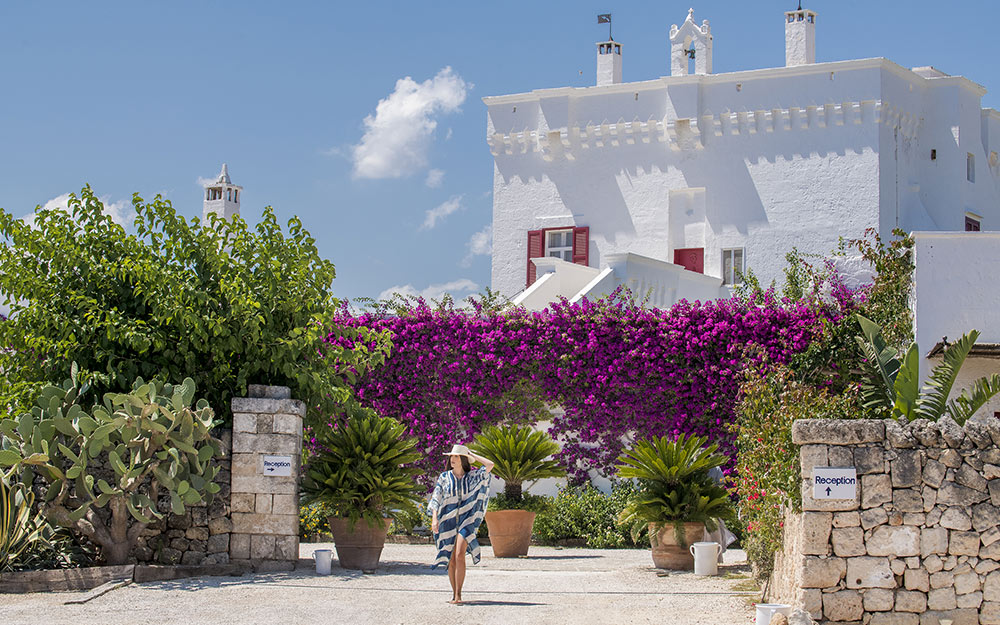 Set in a classic Puglian landscape of limestone and low-slung almond and olive groves, a few miles to the south of the town of Oria, about midway from Taranto to Brindisi, Masseria Palombara feels splendidly sequestered. At first glance little more than a typical stone-walled farmhouse compound, upon further inspection it’s revealed to be a luxe little adults-only resort, spa, and restaurant. 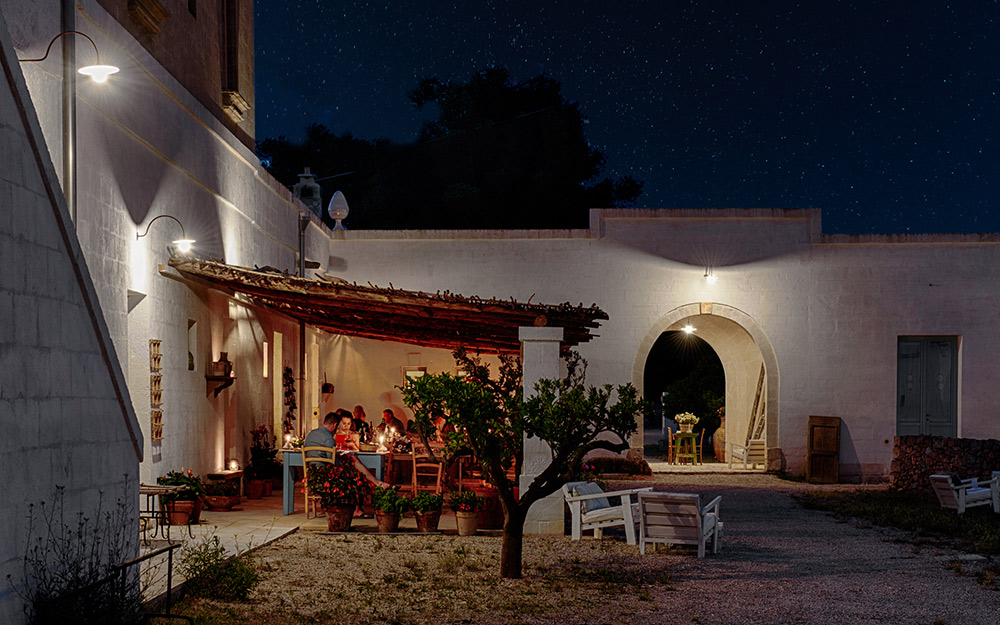 Set in Grecìa Salentina, an enclave of Greek descent in the tip of the heel of Puglia, Critabianca was established as a farmhouse in the 14th century, and then transformed into an aristocratic residence by a French nobleman during a period of 18th-century Bourbon rule. Today it’s a classic country-house hotel, and a perfect introduction to the charms of southern Italian life, convenient to the beaches and to towns like Gallipoli, Otranto, and Lecce. 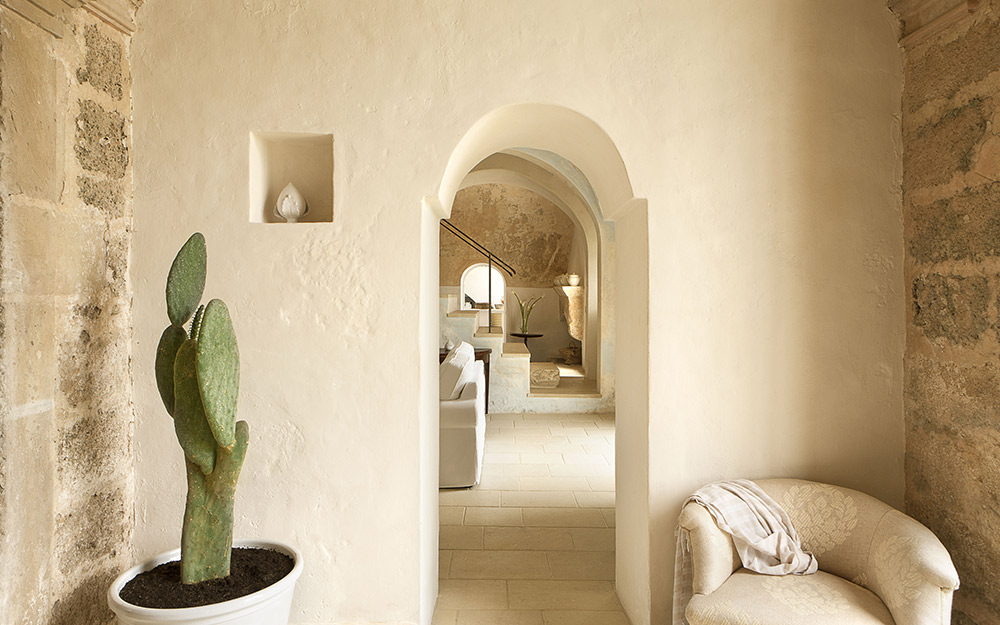 San Domenico’s main building used to be a watchtower, from which the Knights of Malta watched the Adriatic Sea for possible Turk invaders. It’s no surprise, then, that the resort’s ocean views are superb. The immaculately restored interiors of the agricultural complex, carefully pruned orchards, hilltop golf course, sparkling thalassotherapy spa, and magnificent aquamarine swimming pool aren’t bad, either. 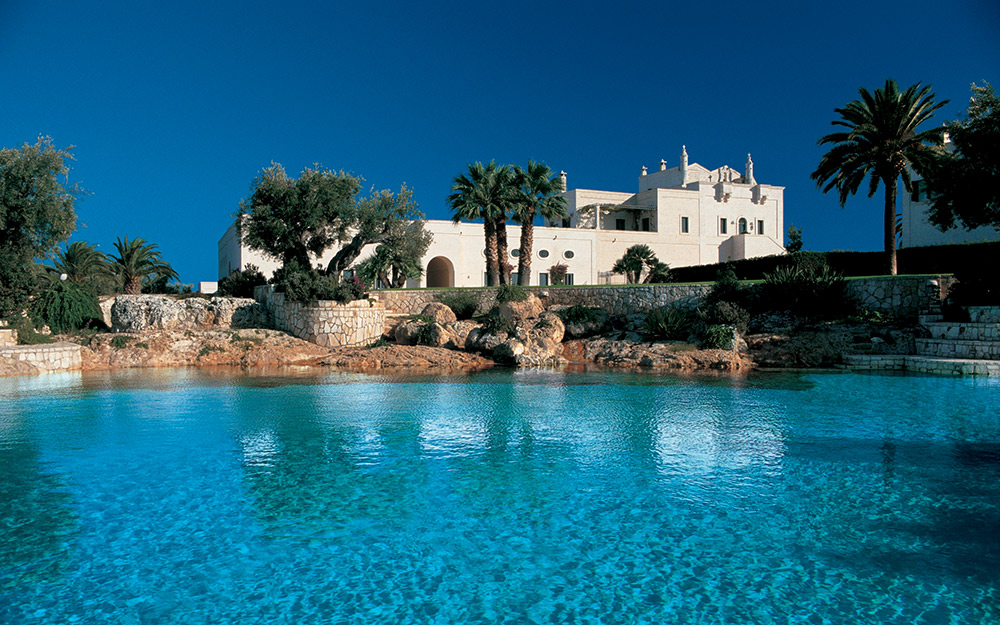 A few plates of fresh eats, room to walk around, something hearty to decant, and the silence in which to contemplate it all. A restored 19th-century manor farm sums those up, and Masseria della Volpe fits the bill nicely. Set on a verdant, rambly patch of earth, it’s a fine example of la dolce vita Siciliana; with vineyard-bearing, weathered limestone hills in one direction and the Ionian Sea glinting in the other. 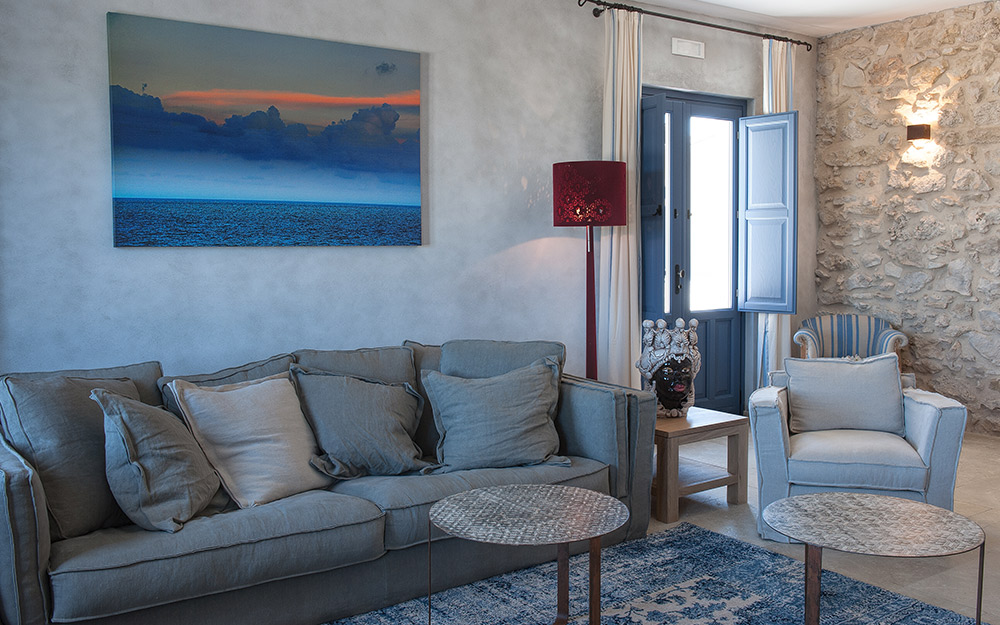 Behind those stone walls, Dimora delle Balze is decorated in that inimitably Italian fashion, with the ancient and the modern existing happily side by side. Modernist furnishings and rustic, well-worn architecture create plenty of visual interest, and the tension is resolved by the sheer comfort of the guest rooms. They’re all different, but they’re uniformly impressive, each one dedicated to a different artist or artwork. 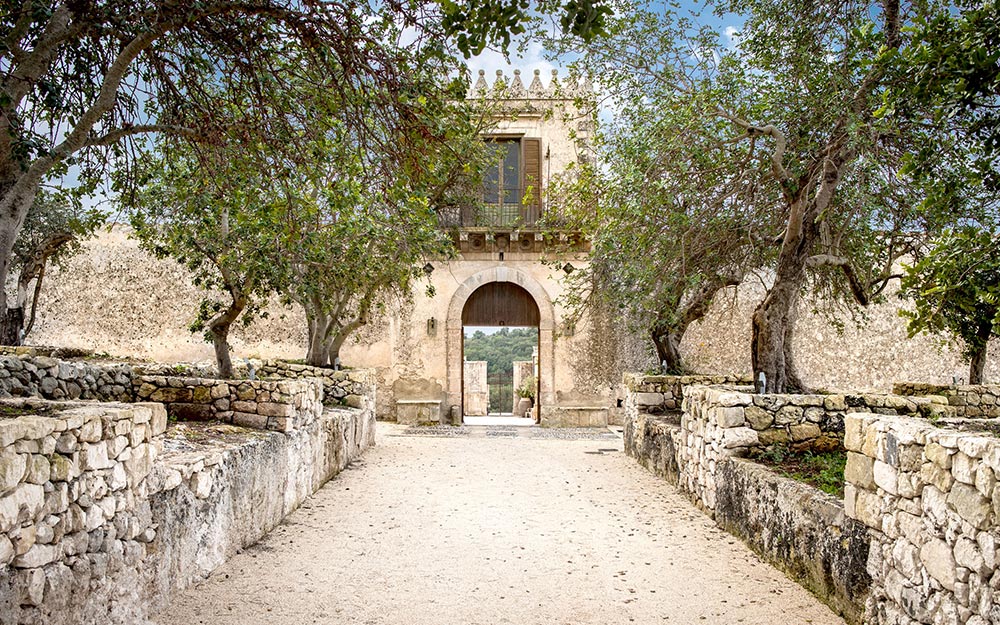 With a sun-bleached stone farmhouse from the 16th century and picturesque trulli, the conical outbuildings that are particular to the region, Masseria Cervarolo is a classic masseria. Some rooms are made from ancient architectural features while others occupy a 20th-century addition; all are stylish, in a rustic way. The restaurant’s open kitchen gives a close-up view of the action — cooking classes are available as well. 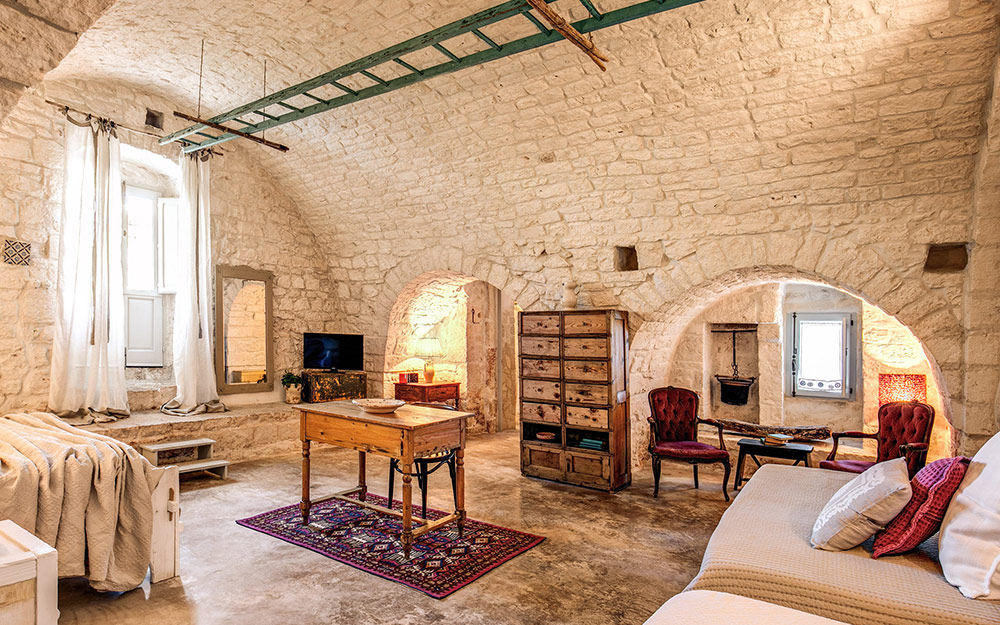 Just outside of Leverano is an Italian countryside classic, a splendid stone farmhouse which has been given the full-on luxury boutique renovation treatment, and has reopened as a stunning small hotel: the Masseria Antonio Augusto. The old exterior walls are still weathered, showing their age, but inside, everything’s buffed to a high sheen, often literally — the polished stone floors and arched ceilings feel more luxe than rustic. 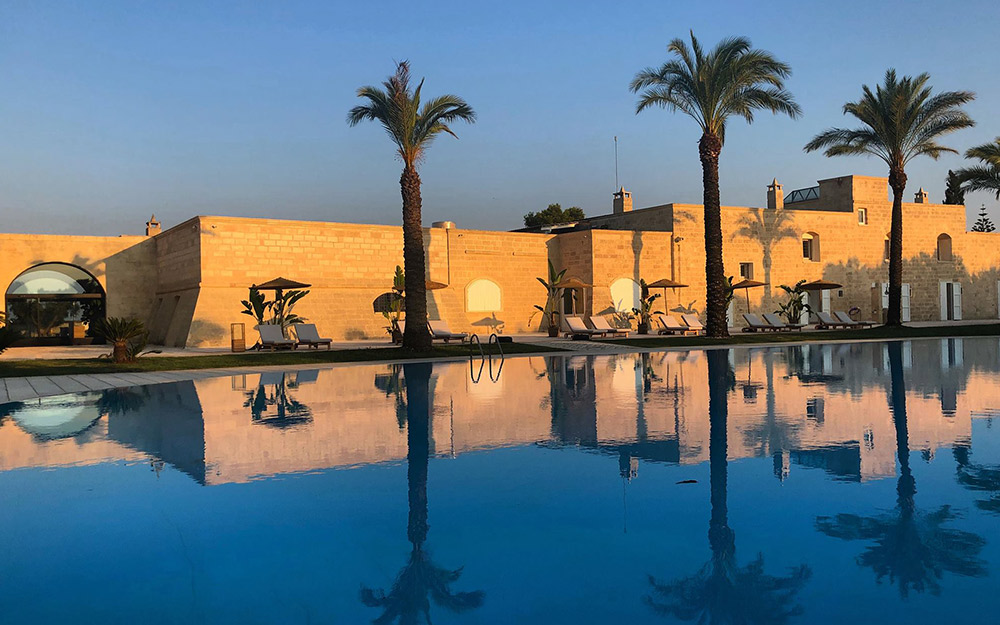 A working farm in Sicily’s rustic, hilly interior, this country boutique distills centuries of hospitality and husbandry into a charming, restful bullseye. The 18 guestrooms (and single apartment) retain their original ceiling beams and antique tiles in an environment of age-softened austerity. You come here for the isolation; televisions have been replaced by rolling hills, subtly perfumed with wild herbs and serenaded by birdsong. 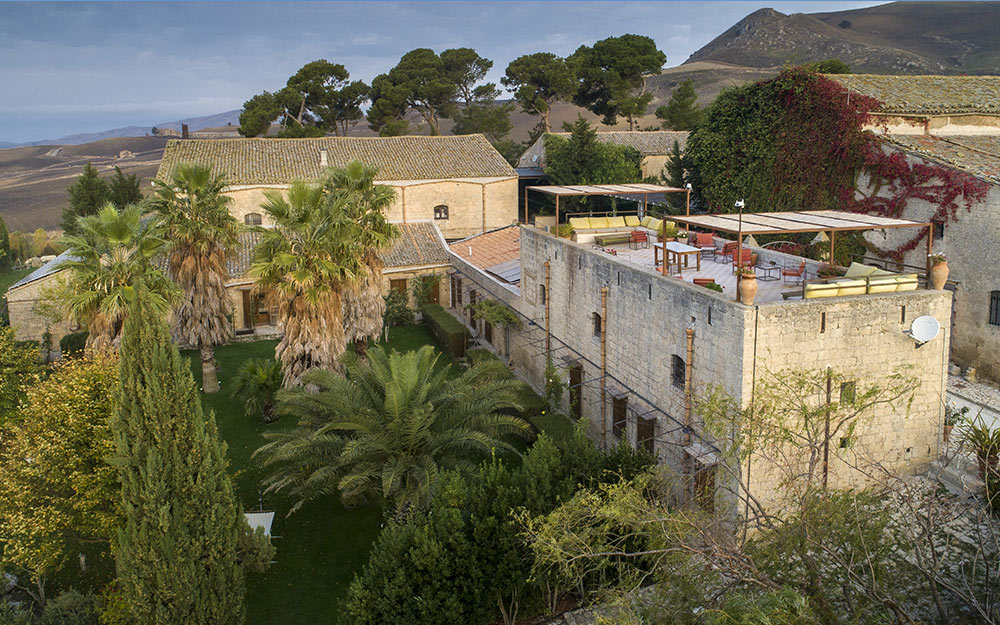 Puglia is a region that historically was down-at-heel in more ways than simply the geographic one, and even as the hotels started sprouting, they were more likely to be rustic farmhouses than high-gloss boutiques. The Masseria Torre Maizza, then, is a bit of a change of pace: while the main whitewashed farmhouse is a perfect example of the traditional local style, the interiors edge toward the luxurious. 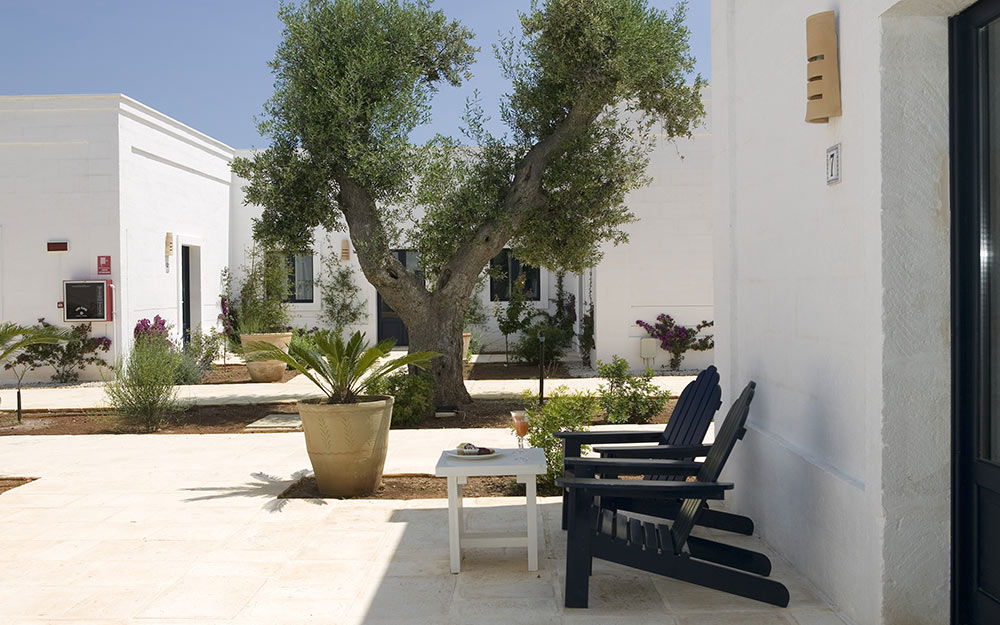 Masseria Cimino is another classic whitewashed farmhouse-turned-hotel, this one with a distinctive red-brick tower of 18th-century vintage. Its 14 rooms are divided between the farmhouse and the tower, and all retain plenty of southern country charm, even as they’re brought up to date with modern comforts. It’s an unassuming place, with a delightfully small-scale restaurant and a cozy bar and lounge. 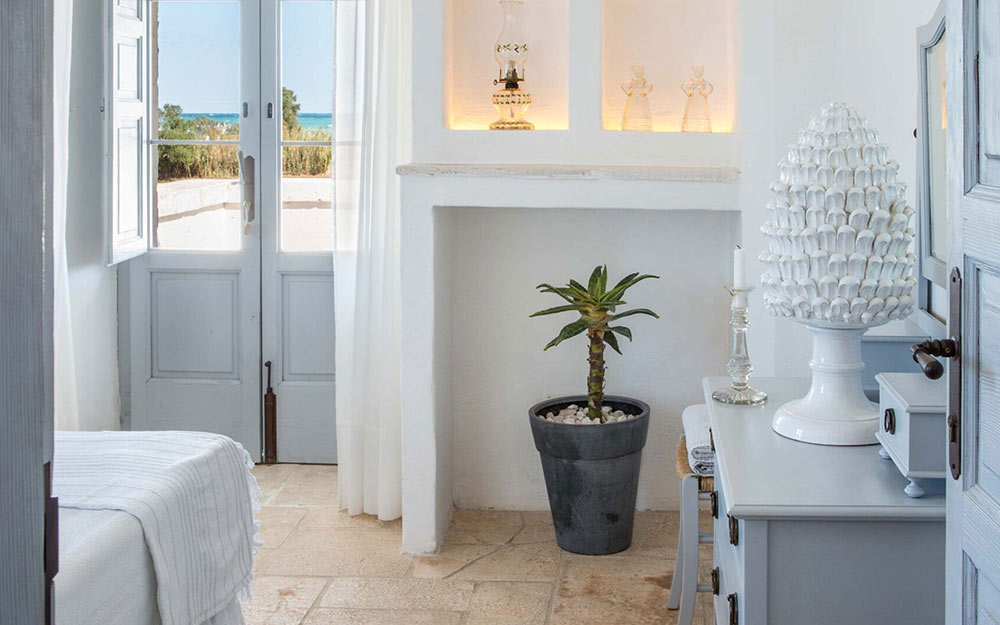 Masseria le Carrube’s whitewashed stone structure stands at the end of a country road, surrounded by the scrubland that is typical of this corner of Italy. Once a working olive-oil mill, it’s now a boutique hotel, its 14 rooms and suites modernized, but subtly — the historical atmosphere remains. Of particular note is the restaurant, an all-vegetarian affair where chef Massimo Santoro showcases the finest local produce. 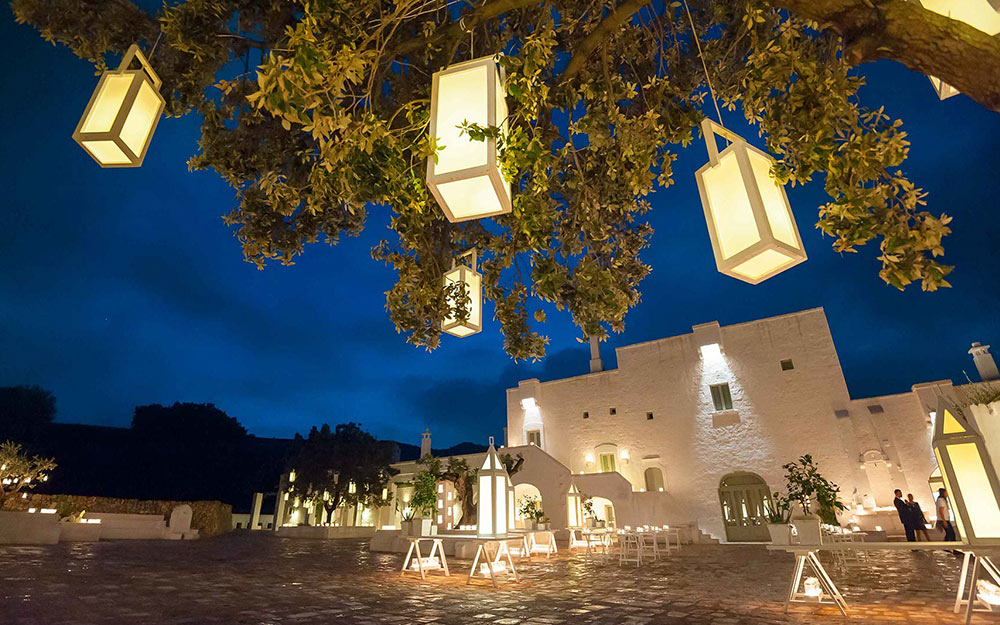