But on his ascent up the culinary ladder, after graduating from the Culinary Institute of America, working at fine dining restaurants like the Four Seasons in Chicago, and staging at top establishments in London and Paris, Kirkley had become intrigued by another summit: representing Team USA at the prestigious and demanding international cooking competition, the Bocuse d’Or, held every two years in Lyon, France. Founded by the late legendary French chef Paul Bocuse, the United States had been represented since 1987, but only recently vanquished European rivals, finally winning the silver medal in 2015, and gold in 2017. 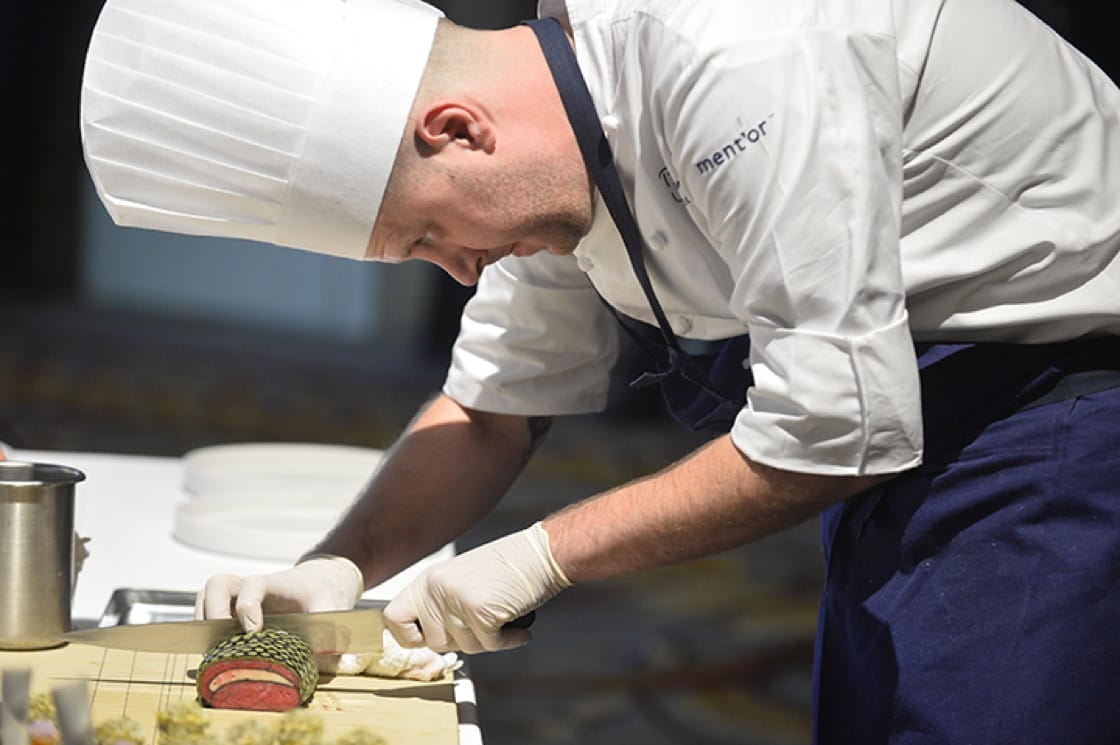 With the next contest coming up in January 2019, trials to select the American candidate were held last November at the Venetian Hotel in Las Vegas. “Competing,” Kirkley admits, “had been in the back of my mind, but I thought that this was a good time to step out of Coi. I felt that at 34, with a little three year-old-daughter, if I don’t do it now, it was never going to happen, so I put my hat in the ring.”

Kirkley credits a great team at the restaurant for helping him prepare for the Las Vegas competition while still manning the kitchen at Coi. Following the Bocuse d’Or format, his mission was to cook and present two handsomely garnished dishes, one meat and one fish, to a panel of judges within a precise time frame of five hours and 35 minutes.

In Las Vegas, Kirkley, along with a talented young commis, Mimi Chen, raced to the finish line and to victory over two other finalists. Their lives would change, leaving behind the routine of a restaurant for 14 months of intense preparation in the Napa Valley in a kitchen that replicates the one in Lyon where they will compete against 23 other teams. 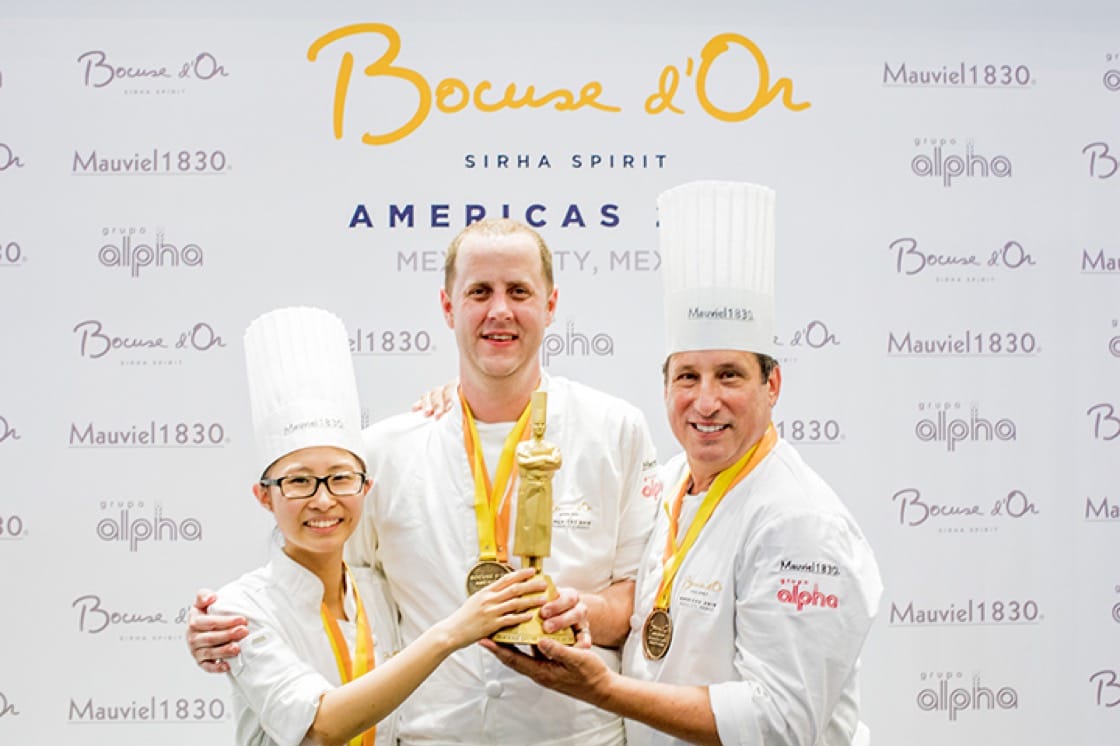 They would be supported by a bevy of illustrious coaches and assistants, under the umbrella organization ment’or BKB, a non-profit foundation launched by Thomas Keller, Daniel Boulud and Jerome Bocuse, son of the famed Paul, to mentor and financially assist the U.S. team. “We’re lucky,” says Kirkley, “that we have the support of the Foundation so that we can do this full time, 12 hours a day, six or seven days a week.”

Following their national selection, the new team faced another hurdle, a two day competition in Mexico City in April to select candidates from all countries in the Americas for the summit in Lyon. “The Bocuse d’Or organizing committee,” Kirkley explains, “sets the rules, picks the meat and fish proteins and decides when they are going to release the information to the teams.” A suckling pig and salmon were the selections for Mexico City, but, Kirkley continues, “part of the Bocuse d’Or is that they throw these curve balls at you, so with only three weeks to go they added crab.” It was a lucky break for Kirkley who had often fished for crab with his dad on the shores of the Chesapeake, and had garnered two Michelin stars at Chicago-based L20 where he was chef/partner before moving on to Coi. 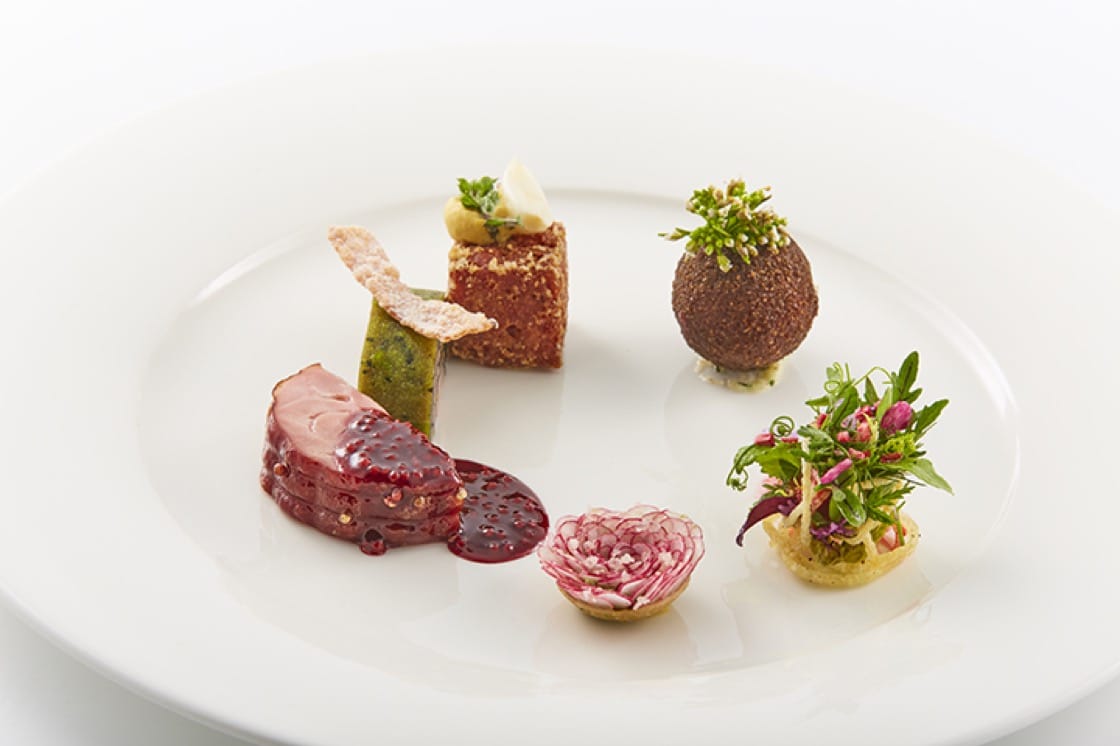 His Chilean salmon roulade with blue crab, asparagus and California-raised caviar, along with three pork presentations, including American ham with blackberry mustard seed glaze, clinched first place for a jubilant Team USA. “Great practice,” Kirkley recalls, “for the team to travel to a different country—and compete with other countries who are pretty spectacular in their own right—which makes us more flexible, more nimble.”

While the meat selection for Lyon won’t be released until September, and the type of fish around Thanksgiving, Kirkley is already developing ideas for garnishes that will work with different kinds of proteins. He compares it to reverse engineering: “We are starting to work on our garnishes for the meat platter without knowing the protein. You can come up with some theories, but what we are trying to do now is kind of look backward, we’re trying to figure out vegetables that will work with a couple of different meat options. At this point it is very much a right brain process, then in September it starts to switch to left brain when it becomes more about method and technique.” 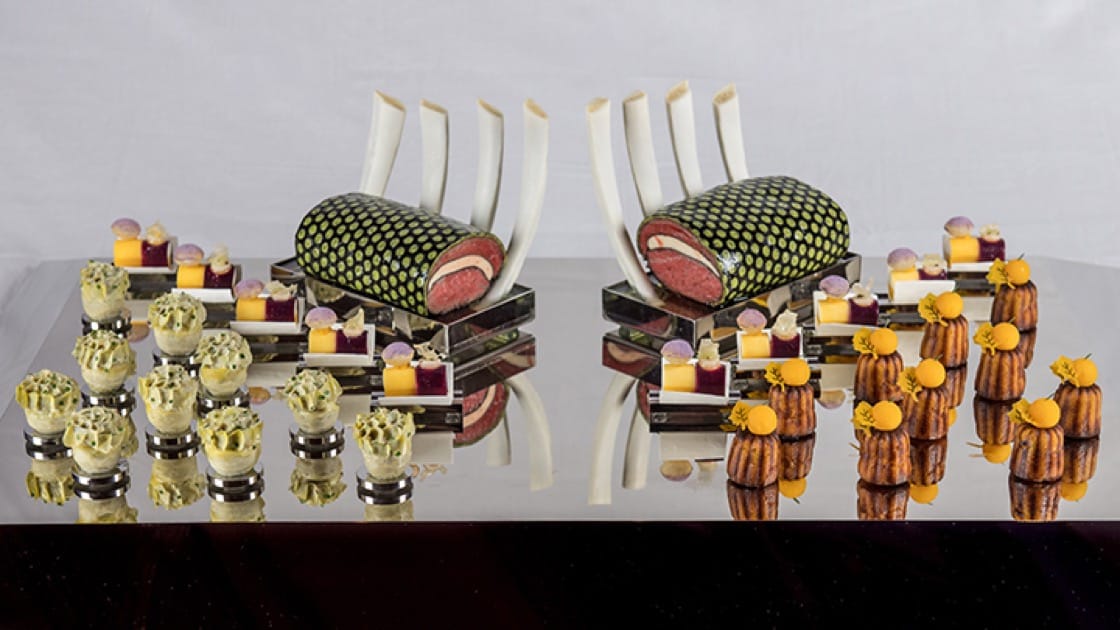 Comparing his current schedule to that in a restaurant kitchen, Kirkley observes, “I like doing creative research and development 60 hours a week as opposed to three or four a week in a restaurant. In a restaurant it’s prep during the day and service at night; well, now it’s one service a year. That takes a little getting used to because you are accustomed to having daily feedback from guests, from your staff—is it good or bad—you’re filtering things through a prism of the number of covers—do we have enough staff, do we have enough product to be able to do this for a couple of months; there’s food costs, labor costs. The payoff on a daily basis is feeding your guests and making them happy. We don’t have that here.”

Kirkley concedes that he certainly misses the restaurant—it’s what he’s done for 20 years.

But, he is thrilled to have “this unique opportunity. My goal is to represent my country honorably and to do the best I can. And I expect to be back in a restaurant for the next 30 years.”