This dish, currently on the menu at newly-opened Violet in NYC, has become a guest favorite.

Last month, husband-and-wife duo Matt and Emily Hyland opened the doors to their latest and greatest venture, Violet, in New York’s Alphabet City neighborhood. Specializing in Rhode Island-style pizza—and named for the state’s flower—“everything is going smoothly” in the 50-seat restaurant. This comes as unsurprising, as the power couple has created a cult following with their restaurant group that opened city dwellers’ eyes to the awe of pizza coming out of Detroit, as well as the Instagram-favorite Emmy burger.

“Sometimes it’s hard to stop and look at what we’ve done—and we’re still trying to open new stuff,” says Matt. “It’s really been something that we’re part of the New York pizza fabric.” With the addition of Violet, Matt and co. are starting to produce pasta in-house; tortellini is filled with duck and arrives swimming in dashi brodo and Sichuan oil while spaghetti with clams gets heightened via dashi, seaweed and bonito butter.

The baked pasta on the menu is comprised of two of Matt’s favorite components: radiatore pasta and vodka sauce. “It’s such a fun shape,” he says of the atypical pasta that you may have trouble finding in your local grocery store. “It holds the sauce really well. We broil the dish under the [salamander], and the edges get nice and crispy. I love it.” The pasta machine at Violet currently has both brass radiatore and campanelle dies—another favorite shape of Matt’s.

The simple pink sauce is a combination of tomato, cream, “lots” of cheese and a splash of vodka. “Getting the tomato acid to cut through the cheese, and then having a little vodka to round out the flavors will make you eat the whole plate,” he says.

The Hylands are gearing up to celebrate their five-year anniversary. “I think I’m done experimenting with pizzas for now,” Matt says, candidly. “These are the styles of pizza I like to eat, and we’re doing well—I don’t think we need to do anything different. If I were going to open up another restaurant, I’d like to cook other cuisines . . . like Tex-Mex. High-end Tex-Mex.”

Only time will tell. In the meantime, try your hand at making Matt’s signature baked radiatore pasta, currently a favorite on the menu at Violet. 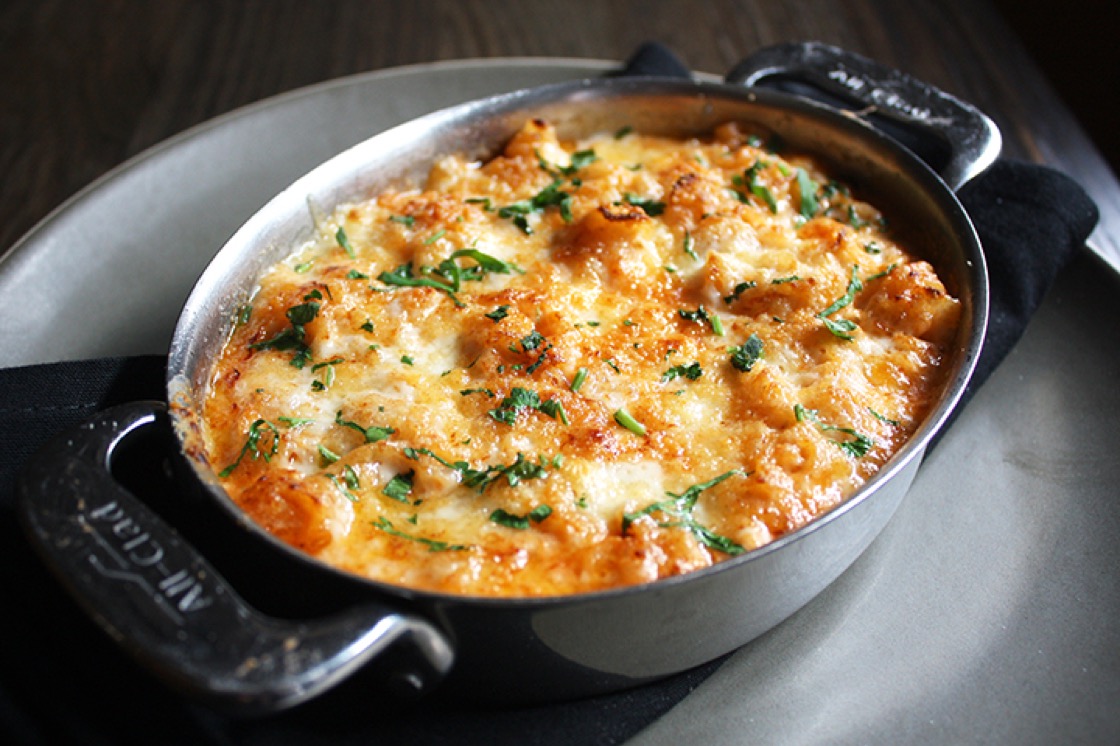 3. For each serving, warm six ounces of vodka sauce in a small pot. Add the cooked pasta to the warmed sauce and mix until combined; pour into a small baking dish, cover with the Pecorino and fontina cheeses, and bake until golden brown on top. Sprinkle with some parsley and drizzle with some olive oil. Serve.

Toronto Recipe Italian cuisine
All articles of Dining In