Hygge [hoo-guh] is the Danish "art of cozy." It means creating a warm atmosphere and enjoying the good things in life with good people. This could be throwing on a thick sweater and curling up in front of the fire, baking cookies at home to share with friends, or watching a movie with family snuggled up on the couch. And hygge goes beyond homemade—it's an everyday practice you can find anywhere. Outside of the house, it means visiting warm, inviting restaurants, enjoying a freshly baked pastry at a baggeri, traipsing through endless Christmas markets and, for the Danes, tucking into highly-anticipated seasonal hygge holiday foods.

But even cozy foods can get a fine dining upgrade. Around the most wonderful time of the year, lauded, fine dining chefs across Copenhagen are in full hygge mode, indulging in traditional, seasonal holiday treats and drinks—all with a luxurious spin. In the pursuit of everyday coziness, here are five elevated yet traditional Danish Christmas foods crafted with a deluxe touch. 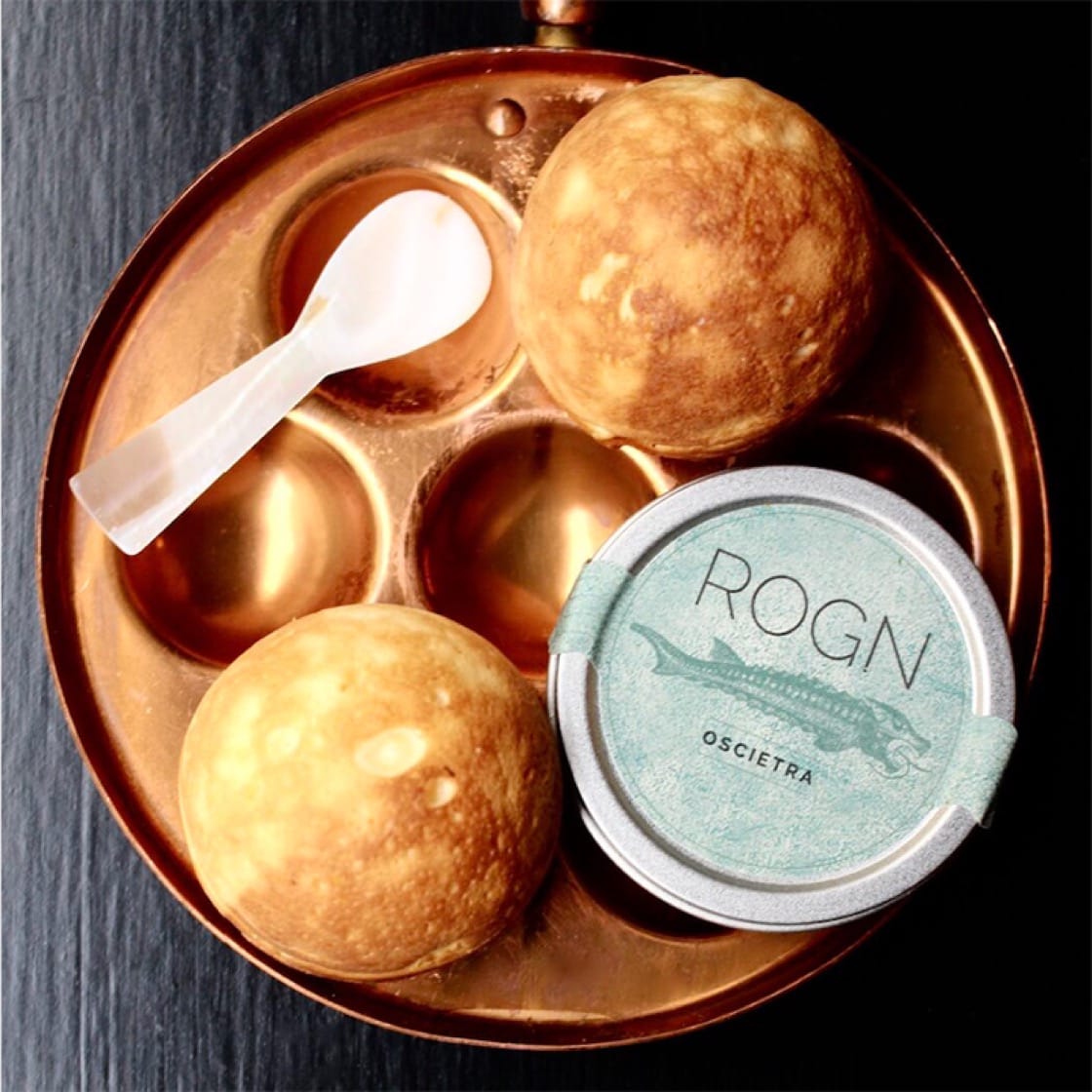 Traditionally served as a dessert, Frank in Copenhagen has a savory æblskiver served with crème fraîche and caviar. (Photo by Kaspar Mørk Arianto.)

This pancake ball sprinkled with powdered sugar and dipped in berry jam is one of the hallmark, hygge Danish Christmastime foods. (It even reached as far as the aisles at Trader Joe's at one point in the form of the now discontinued "Danish Pancakes.") The traditional æbleskiver, which translated to English roughly means "apple slice," dates back to the 1700s. It was formerly a thin slice of apple, dipped in batter and fried in butter. Over time, the slice of apple vanished and the shape changed into round molds, but the name remained the same. It is now a typical Christmas dish all over Denmark.

At the Michelin-starred Marchal nestled inside Copenhagen's famed Hotel D'Angleterre, chef Andreas Bagh makes his æblskiver à la minute. He brings together buttermilk, flour, butter, sugar, egg yolks, whipped egg whites and many warming spices (tons of cloves, cardamom and cinnamon) with a touch of orange zest that shines through—the result is like no other street or market stall æblskiver. They are served dusted with icing sugar with strawberry jam on the side and meant to be enjoyed in front of the luxurious roaring fireplace at Hotel D'Angleterre.

On the other hand, hip, cozy and trending restaurant Frank in Copenhagen has a savory and luxe take on the classically sweet dish: dolloped with crème fraîche and caviar. This salty version of æbleskiver has been served in the Copenhagen restaurant scene in recent years and has made appearances on the menus of the world-famous Noma and Studio. At Frank, chef Christoffer Brink's version is very minimalistic and clean. The salty pancake balls are served as an amuse bouche topped with Rogn caviar for a soft, warm, salty and doughy bite all at once. 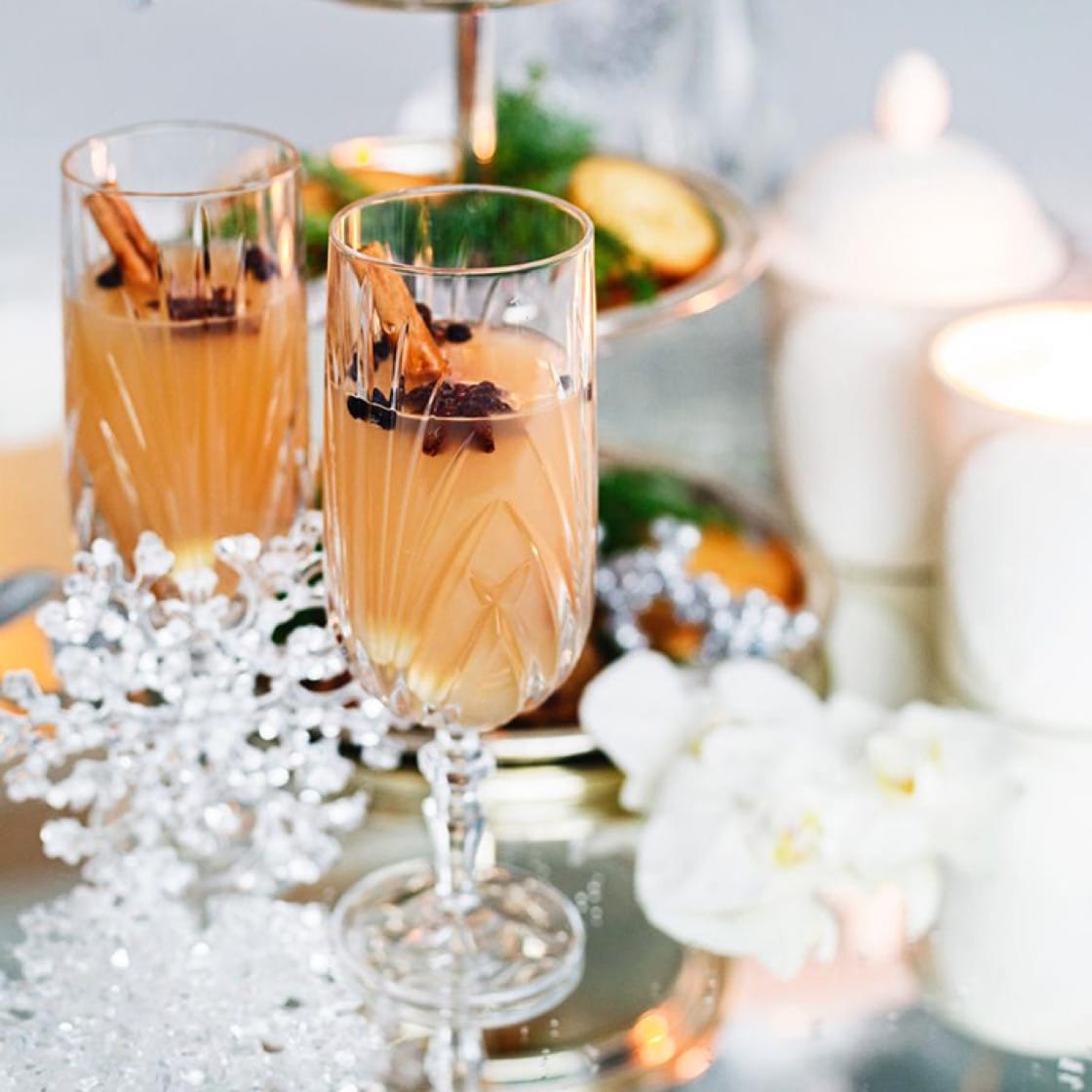 Similar to mulled wine in Britain, vin chaud in France and glühwein in Germany, Danes and Swedes have been drinking gløgg, a warmed red wine studded with various spices, raisins and sliced almonds, since the 16th century. Though many people in Denmark have their own family recipe, gløgg typically includes red wine, Port, Danish "snaps" and traditional Christmas spices (cinnamon, cardamom and star anise). This mulled wine is featured across countless Christmas markets, restaurants and cafes as the perfect way to warm up from the inside out.

While most gløggs use cheap wines, at the Hotel D'Angleterre, chef Bagh makes a very special and famous white gløgg—dubbed the Snow Queen's Gløgg—with high quality Chardonnay, orange juice, Cognac, Armagnac, spices and the signature almonds at the bottom of the glass.

Within the magical winter wonderland depths of Tivoli Gardens, The Nimb Bar makes its gløggs by creating an extract with traditional Christmas spices such as clove and star anise. Beverage director Antonio Saldanha de Oliveira creates the extract in the beginning of November and mixes it with wine to create the gløgg. 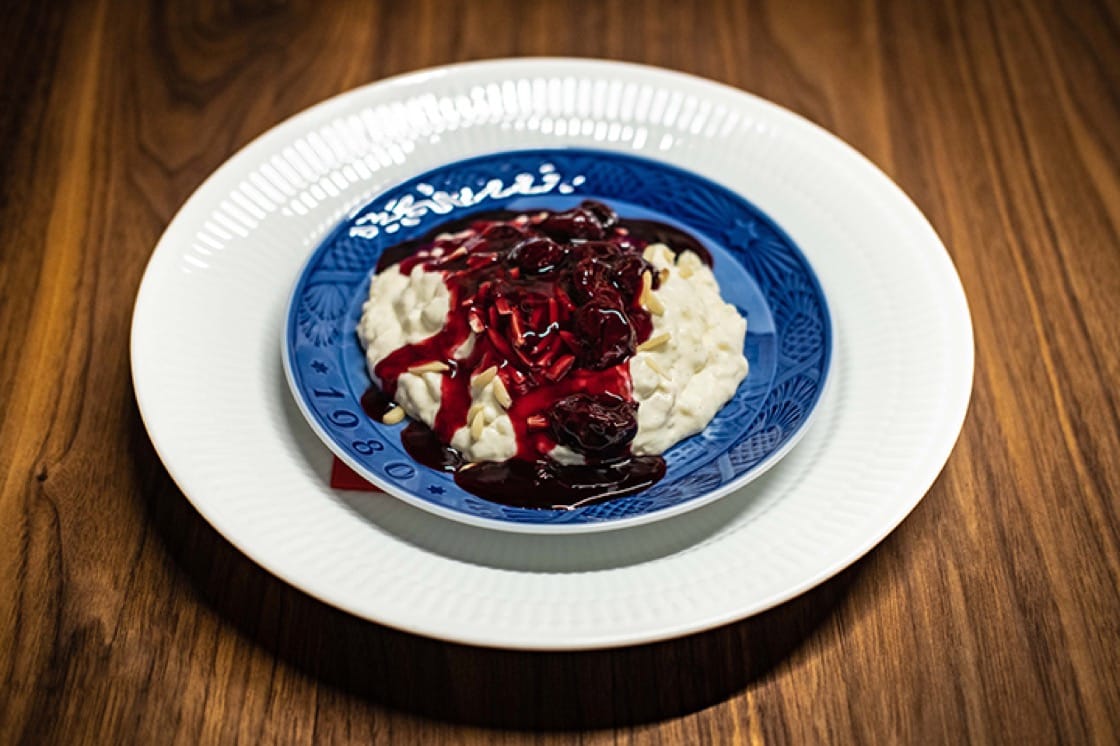 Risalamande is a cold rice porridge mixed with whipped cream, vanilla and almonds, and served with hot or cold cherry sauce or compote. It's a big part of the traditional Danish Christmas Eve dinner, served at practically every household in the country. Even though it sounds French, it is completely Danish; it stems from risengrød, the hot version of this Christmas rice pudding traditionally served on December 23. The cooled leftovers were mixed with cream and almonds to create risalamande. Instead of referring to it as "leftover risengrød," it was given an elegant rebrand. (According to Danish historian Benno Blæsild, the dish was allegedly invented one late night at the Hotel D'Angleterre, when a hurried chef needed to serve visiting nobles dessert last minute and gussied up this deluxe pudding with a grand name.)

At Marchal in Copenhagen, chef Bagh orchestrates a beautifully modern version of these sweet humble leftovers, serving it in an structured manner as cherry sorbet, rice foam, almonds, cream and white chocolate.

Smørrebrød ("butter bread") is something Danes eat year round for lunch, but they go all out for the Christmas lunches and parties. Smørrebrød is typically rye bread or white bread with different toppings like fish (particularly herring), small shrimp, roast beef, eggs and many more.

At Restaurant Palægade—where lunch is the star and executed by a fine dining staff in a relaxed, high end hygge setting—this classical Danish kitchen led by co-owner Karina Pedersen (and under the same ownership as Michelin-starred formel B) serves luxe smørrebrød with craftsmanship in focus. At Christmastime there are some super smørrebrød classics like fried herring, gravad salmon with sweet and spicy mustard sauce, smoked eel with scrambled eggs and pork roast with pickled red cabbage. But Pedersen ups the ante at Palaegade with more luxurious specialities of smørrebrød, such as lobster tartare with fried egg and breaded turbot with oxtails. 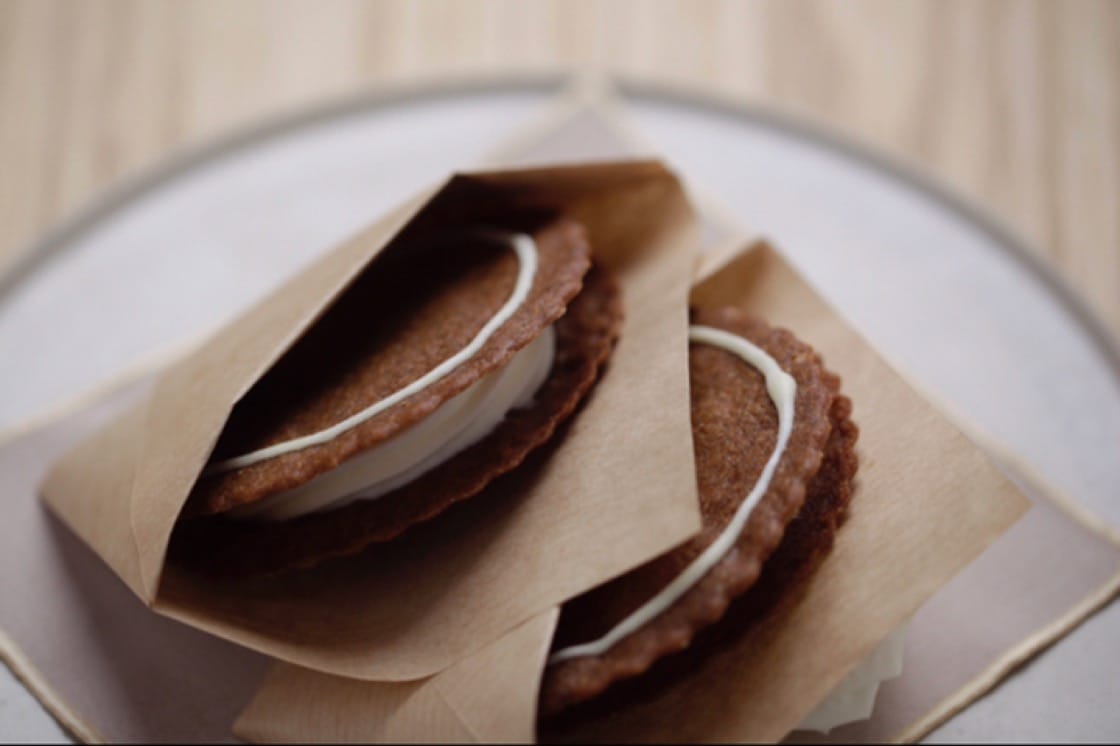 Brunkager translates literally as "brown cookie." Most closely related to American gingerbread, these Christmas treats are sweet biscuits seasoned with warming spices. Brunkager made its first appearance in the middle of the 18th century in Denmark during the rise of the iron stove that made it easier to regulate cooking and baking heat, thus ensuring that cakes did not get too dark and hard to eat. It is also during this period that the baking of brunkager became a regular tradition during the Christmas season.

Traditional brunkager combines a variety of warming spices, almonds and potash, a leavening agent that gives the cookie it's characteristic crunch. At Barr in Copenhagen, which serves traditional Danish foods with a modern nod and flair, chef Thorsten Schmidt's tribute to the dessert is serving it as an ice cream sandwich with a preserved cherries ice cream filling.