A UNESCO Creative City of Gastronomy renowned for its East-meets-West culinary culture, Macau is home to a diverse range of cuisines, world-class hospitality and exciting entertainment.

As a pioneer, SJM’s culinary foresight has paved the way for Macau’s gastronomic success and has set the company apart from the rest. When Hotel Lisboa opened in 1970, Macau’s culinary scene was just emerging. With a vision to revolutionise Macau’s gastronomy landscape, the founder Dr Stanley Ho invited legendary celebrity Chef Joël Robuchon to open Robuchon a Galera at Hotel Lisboa in 2001 — the first of its kind in Macau.

Robuchon brought his experienced culinary brigade to Macau, where they set up the restaurant and implemented training programmes to ensure the service standards of Robuchon a Galera at Hotel Lisboa would be of the highest quality.

However, ensuring Robuchon a Galera could actually measure up to its French counterparts came with challenges. Macau simply did not have an extensive selection of ingredients at the time, so even simple things like herbs and seasonings were sourced from abroad to adhere to Robuchon's strict standards. In 2009, Robuchon a Galera at Hotel Lisboa became the first Western restaurant in Hong Kong and Macau to earn 3 MICHELIN Stars in the inaugural edition of the MICHELIN Guide Hong Kong Macau.

With the arrival of Grand Lisboa in 2007, the restaurant relaunched as Robuchon au Dôme inside a 780-foot-tall dome atop the hotel several years later in 2011. As the jewel in SJM’s crown, Robuchon au Dôme remains the pinnacle of French gastronomy and has successfully maintained its MICHELIN 3-Star status for an impressive 14 consecutive years.

The secret behind this achievement? Quality and consistency. From sourcing the best ingredients to setting high quality service standards, the philosophy at SJM is to consistently present an exceptional dining experience for guests.

But SJM goes well beyond importing stars from abroad; the company has over the years developed highly accomplished culinary icons of its own.

As the only hospitality brand firmly rooted in Macau, SJM is deeply committed toward developing native brands representative Chinese culture on the global stage. In 2007, SJM opened its own homegrown brand – The 8 – which was created, designed and led by a team of talented local creatives and chefs at Grand Lisboa. SJM attributes the success of The 8 to the way in which the company invests in its people. SJM recruits talents with tremendous passion and determination, and enable room for growth by encouraging creativity and exploration. The 8 offers the perfect stage for local chefs to pursue their dreams.

In 2014, under the leadership of the youngest chef in Asia – Head Chef Au Kwok Keung – The 8 earned 3 MICHELIN Stars for the very first time. After achieving the pinnacle MICHELIN 3-Star recognition for The 8, Chef Au was highly sought-after by restaurants and hotels all across Asia for his remarkable culinary expertise.

Today, Au Kwok Keung returns home to SJM as Executive Chef of The 8, where he will once again lead a team of talented local chefs. Since Chef Au first garnered 3 MICHELIN Stars for the restaurant, The 8 has successfully retained this highly coveted status for nine consecutive years. Now, with Chef Au back at the helm, he looks forward to carrying on his MICHELIN-Starred legacy for The 8.

Yet another restaurant in SJM’s portfolio to clinch a MICHELIN Star is The Kitchen, the Grand Lisboa’s one-MICHELIN-starred modern steakhouse, which has held onto this ranking for nine years in a row. Apart from its impressive selection of premium meats from the US, Australia and Japan, The Kitchen draws a crowd through its diverse menu of grilled and sashimi options with live, fresh-from-the-tank fish.

SJM’s culinary triumphs extend far beyond the company itself, having also set in motion higher quality standards and more diverse offerings across the entire food and beverage industry in Macau.

The 8 provides a perfect platform for local chefs to realise their dreams.

No dining experience is truly complete without the right wines, and the hotel takes it to the next level with its very own – and Asia’s largest – wine collection of 17,800 labels, the majority of which are rated over 91 points by Robert Parker’s Wine Advocate. Boasting the most extensive and exclusive wine collection with over half a million bottles, Robuchon au Dôme, The 8 and The Kitchen at Grand Lisboa offer a 600-page wine list for guests to choose from.

Paul Lo, Director of Food & Beverage for Grand Lisboa Hotel, who has been with SJM for over 20 years, remembers a time when the hotel only had a thousand wine labels in its collection back in 2001. “We started the wine programme at Hotel Lisboa, where we attempted to build one wine cellar, but we faced numerous challenges in terms of temperature control, insulation and humidity control because different vintages and various wine categories all required different settings. Fortunately, with the opening of Grand Lisboa Hotel right next door, we had much more space and the opportunity to build tailor-made wine cellars. We are now home to 23 wine cellars which house 17,800 labels from around the world."

At the outset, the wine collection was solely designed for Robuchon a Galera, but as the Macau hotel industry started to develop, the demand for fine wines grew exponentially, making a conscious push to expand the wine list for all of its restaurants.

Each restaurant has a focus. For example, the wine programme at The 8 focuses on German wines, which tend to be fruitier and sweeter than wines from other parts of the world, making them the perfect pairing for Cantonese food. The flavour profile of German wines suits the local Chinese palate more than dry wines, so the demand is expected to increase in future.

As far as wine storage is concerned, every detail is thoughtfully considered. The hotel stores the wines at temperatures ranging between 12° to 15°C. Twice each day, the temperature is checked manually. The temperature sensor is linked to the hotel’s security room, so once the temperature rises or drops beyond the range, an alarm goes off. With high-end vintages that can cost up to MOP 500,000, security is a top priority. All cellars are protected with security cameras, fingerprint locks, infrared systems and movement detectors to keep the wines safe and in good condition. 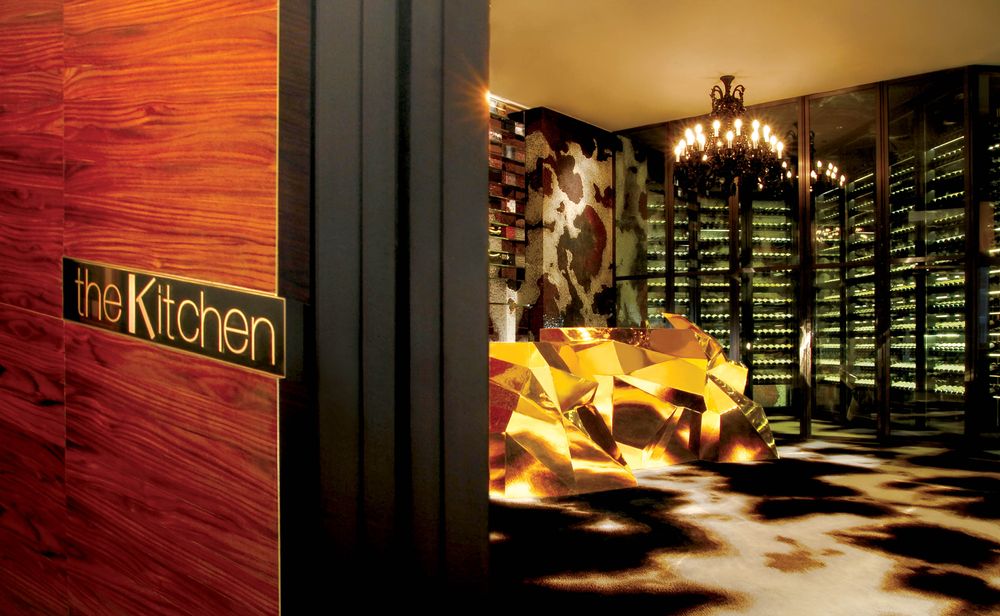 The Kitchen features various grill menu .Guests can choose their own seafood for sashimi from the fish tank.

Carrying on the legacy

Under the guidance and ambitious vision of its founder Dr Stanley Ho, SJM has elevated the level of gastronomy in Macau.  Today, under the leadership of its chairman Daisy Ho, SJM continues to successfully build on his culinary legacy.

With the opening of Grand Lisboa Palace Resort Macau in Cotai in July 2021, SJM is redefining hospitality with distinct designs and iconic styles. The new integrated resort is home to three hotel towers including Grand Lisboa Palace Macau and Macau’s first two fashion-branded hotels, Palazzo Versace Macau designed by the renowned Italian luxury fashion house, and THE KARL LAGERFELD with its interiors fully designed by the eponymous and legendary designer.

Two new dining concepts showcase the cuisines of East and West at Grand Lisboa Palace, including Palace Garden, a contemporary Cantonese restaurant paying tribute to the Chinoiserie period of China’s trade where diners can savour authentic Cantonese cuisine, and Mesa at THE KARL LAGERFELD, which features contemporary Portuguese flavours and a farm-to-table approach.
SJM’s expansion in Macau further solidifies its position as a trendsetter in the field and its ability to make bold strides and boost the post-pandemic economic recovery of the city.

For Ms Ho, solidarity and innovation are the key levers for navigating and thriving: “We are very proud to see that our passionate and persistent efforts over the years have helped transform Macau into a UNESCO City of Gastronomy and a globally recognised gourmet destination.”

Ms Ho is confident that Grand Lisboa Palace will further build on SJM’s culinary legacy. She remarked: “Our vision is to develop Grand Lisboa Palace into a gastronomic hub for food connoisseurs worldwide who will be impressed by the curated and innovative dining experiences delivered by our acclaimed self-established brands. We believe our new integrated resort will play a pivotal role in attracting visitors from the Greater Bay Area and beyond, well into the future.”

This post is brought to you in partnership with SJM.

This post is brought to you in partnership with SJM

A new dining scene in Central with the opening of various new restaurant.