Everything about Hiroki Nakanoue—his bubblegum-pink hair, western-style chef’s coat and oversized glasses—defies the stereotypes of a Japanese sushi chef. More than just a form of personal branding, the way Nakanoue carries himself is reflective of his identity and, inevitably, his cuisine.

As the chef-owner of three omakase restaurants, including two-MICHELIN-starred Sushiyoshi in Osaka and two overseas namesake outposts in Hong Kong and Taipei, Nakanoue’s take on sushi is incredibly worldly, yet deeply personal.

Having grown up in a family that ran a traditional sushi bar in Osaka, Nakanoue had to take over the business at a young age due to his father’s unexpected passing, before he could be professionally trained to become a sushi chef.

Nakanoue spent years mastering the principles of edomae-style sushi before he came to the realisation that he was too caught up with the idea of this specific sushi style that he did not leave any room for creativity. From then on, he decided to travel abroad and take his cues from western culinary cultures. 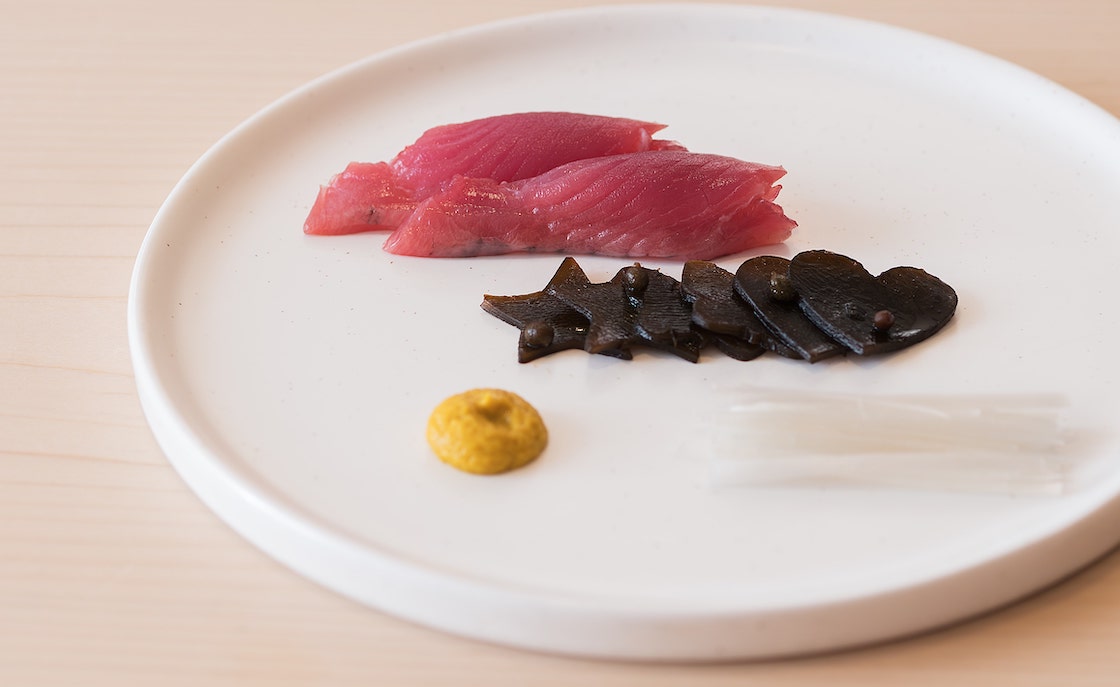 One of the countries that he frequented was France. During his visits, Nakanoue was able to meet local chefs and join them in their kitchens to experiment with new recipes. When the opportunity to produce his own caviar with Sturia in Bordeaux arose, he decided to customise the caviar for a less salty flavour to match the umami of Japanese cuisine.

At Sushiyoshi’s Hong Kong branch, his caviar is served atop of creamy uni and scrambled egg as one of the courses on Nakaoue’s new 19-course omakase menu, which instantly became one of the most talked-about dishes in town.

During his recent visit to Hong Kong, we caught up with Nakanoue, who had just completed his 21-day quarantine, to talk about his culinary philosophy and ambition to expand globally.

RELEVANT: Kitchen Language: What Is Omakase?

How did you decide to become a chef?

I read a book when I was a secondary school student. The book was "Kanda Tsuruchachi Sushibanashi" by chef Yukio Morooka, which is a story about a young chef who serves an apprenticeship at a sushi restaurant in Tokyo. At that time, he inspired a whole generation of (young) chefs like me in this way.

How would you describe your relationship with Japanese food?

It is some kind of presentation for myself. My relationship with Japanese food represents the journey of my life. It is influenced by a respect for tradition but I infuse and honour this tradition with new influences and creative presentation. Japanese ingredients focus heavily on seasonality which is the basis of my omakase journey.

While there is a tradition that Japanese food should be enjoyed with seriousness in some omakase and kaiseki places, my focus is more playful and fun but also respectful.

How would you describe the cuisine you offer at Sushiyoshi in Hong Kong and Osaka?

The ingredients I get in Osaka are excellent which allow me to present my traditional edomae-style sushi and omakase with innovative twists.

However, I have more staff in Hong Kong than in Japan, so I am able to try more new ideas.

My cuisine is an omakase of creative sushi made with traditional edomae-style sushi and Kansai using seasonal ingredients without boundaries.

RELEVANT: The History of Tempura 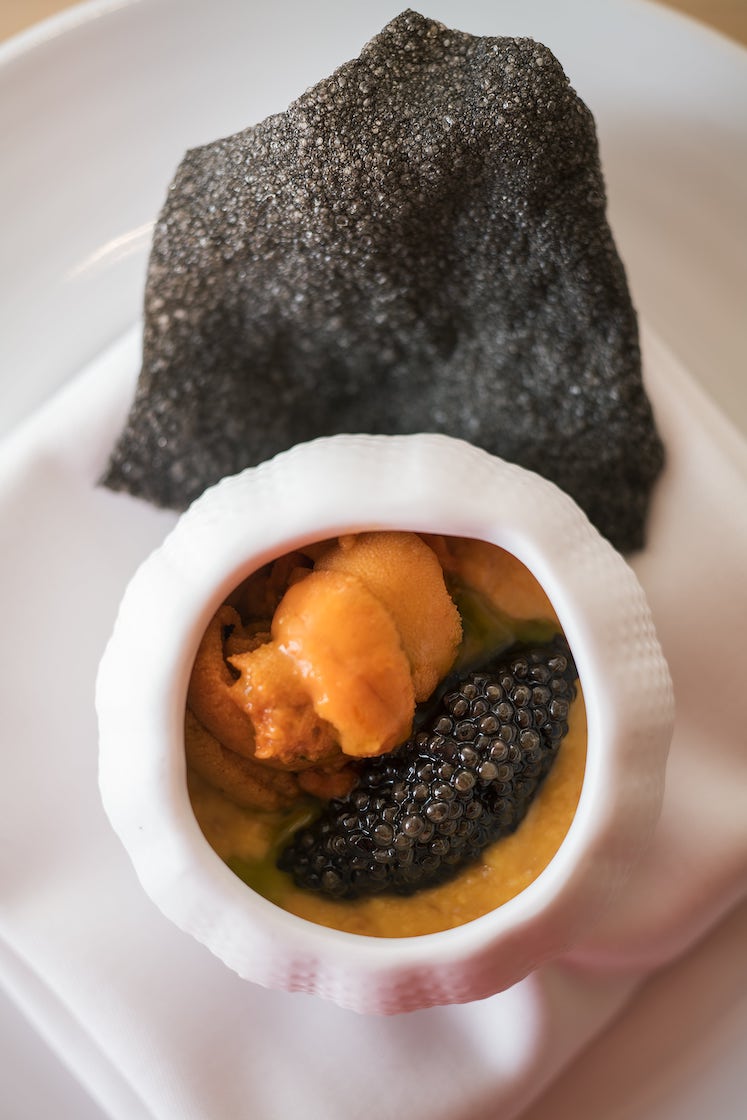 As a self-taught sushi chef with no formal training, what do you think have led to your success today?

I wouldn’t particularly define myself as a “successful person.” I am where I am today because I am passionate about what I do and making people happy through my omakase. I love moments when people’s eyes light up when they discover a new flavour combination I’ve created or when they enjoy a great meal with friends and family.

Sushiyoshi's omakase entails unexpected elements with inspiration drawn from western cuisines, like your uni scrambled egg. What fascinates you about western culinary cultures?

The French culinary tradition, especially, runs parallel to Japan in terms of focus on creativity, provenance and quality of ingredients. I have drawn inspiration from their art and food culture to create my dishes.

(On the left: Uni, caviar and scrambled egg from Sushiyoshi's new omakase menu)

It’s unusual to see a deep-fried dish in a sushi restaurant, and your deep-fried scallop shows that you’re staying away from being traditional. Can you tell us about your desire to innovate?

When my heart is touched by an ingredient or a way of cooking, somehow, it sparks something within me to develop the next innovation.

We’re not a pure edomae-style sushi restaurant. We offer a holistic omakase experience. I have no boundaries when it comes to creativity. When an ingredient touches me in some way or a real-life experience inspires me, I like to experiment more deeply with it to create a new dish. 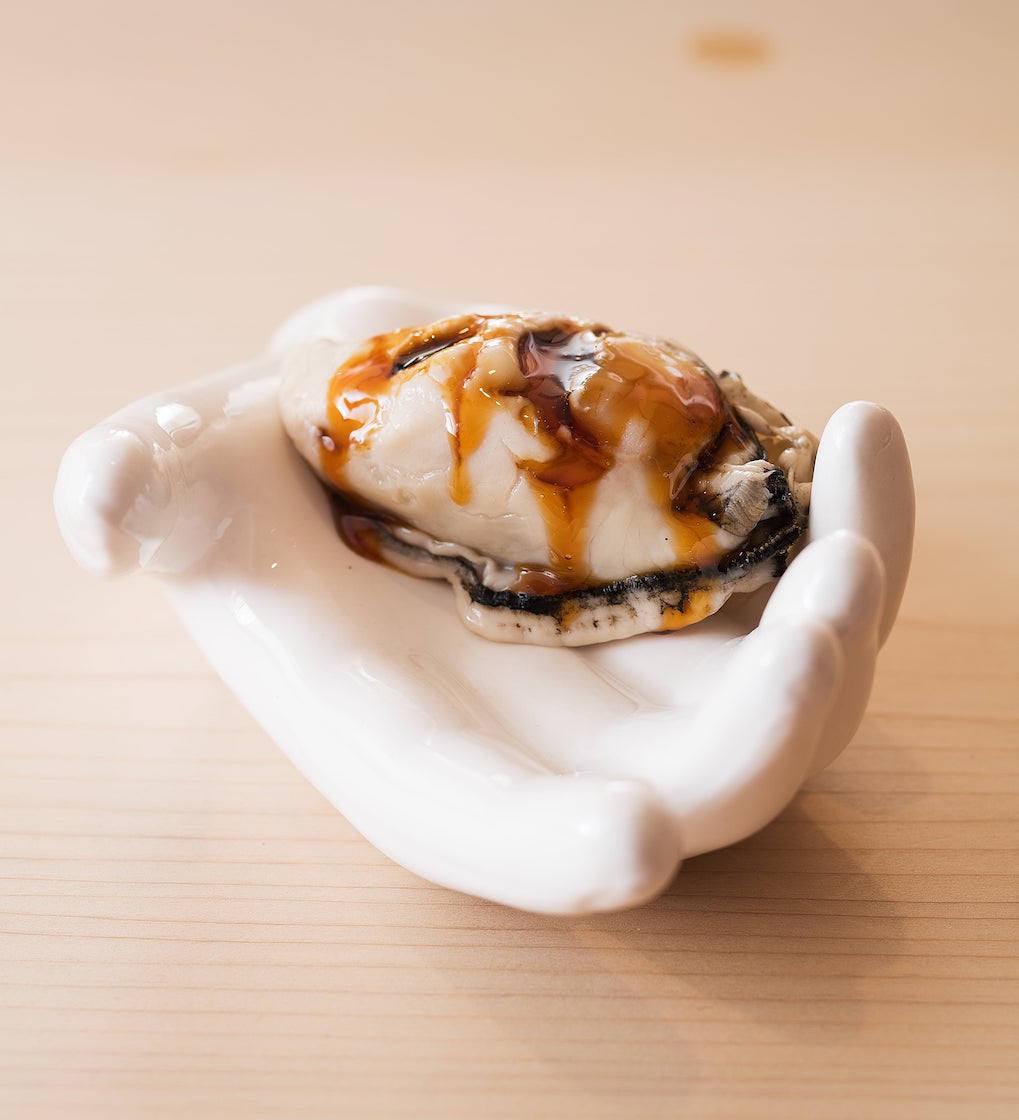 How is it like to have your own restaurants in Osaka, Hong Kong and Taipei? How is each city different? How are the customers like and how is sourcing ingredients locally like in each city?

Customers are the same everywhere—they come to Sushiyoshi for a fun experience. The ingredients I find in Taiwan are of high quality.

High quality ingredients are easy to find in each city, so it’s not a huge challenge. The important thing is to ensure I can get authentic Japanese ingredients and the freshest seafood and fish.

Each city also has its unique characteristics and inspiration. For example, in Hong Kong, I can create an eel sushi wrapped in leaves that looks like a dumpling to celebrate the Dragon Boat Festival, or create a dish using daikon and caviar, which tastes like the local turnip cake.

My dream is to open a restaurant in France.