Before Tang received any proper training, he had his first taste of kitchen life from helping out at his parents’ dai pai dong, or street food stall, at the age of 10. Starting at the bottom, where he was responsible for washing dishes and serving food, Tang discovered his passion for cooking when he was allowed to get hands-on with food preparation in the kitchen.

“When I was studying at the Chinese Culinary Institute (CCI), the instructors were impressed that I already knew how to fillet fish and chop meat, and that I was fast,” recalls Tang.

But working at his parents’ dai pai dong shaped Tang’s career in more ways than one. Today, as the leader of 35 kitchen staff members, Tang still remembers how his father would never compromise the quality and hygiene of food—a principle that has always stayed with him. 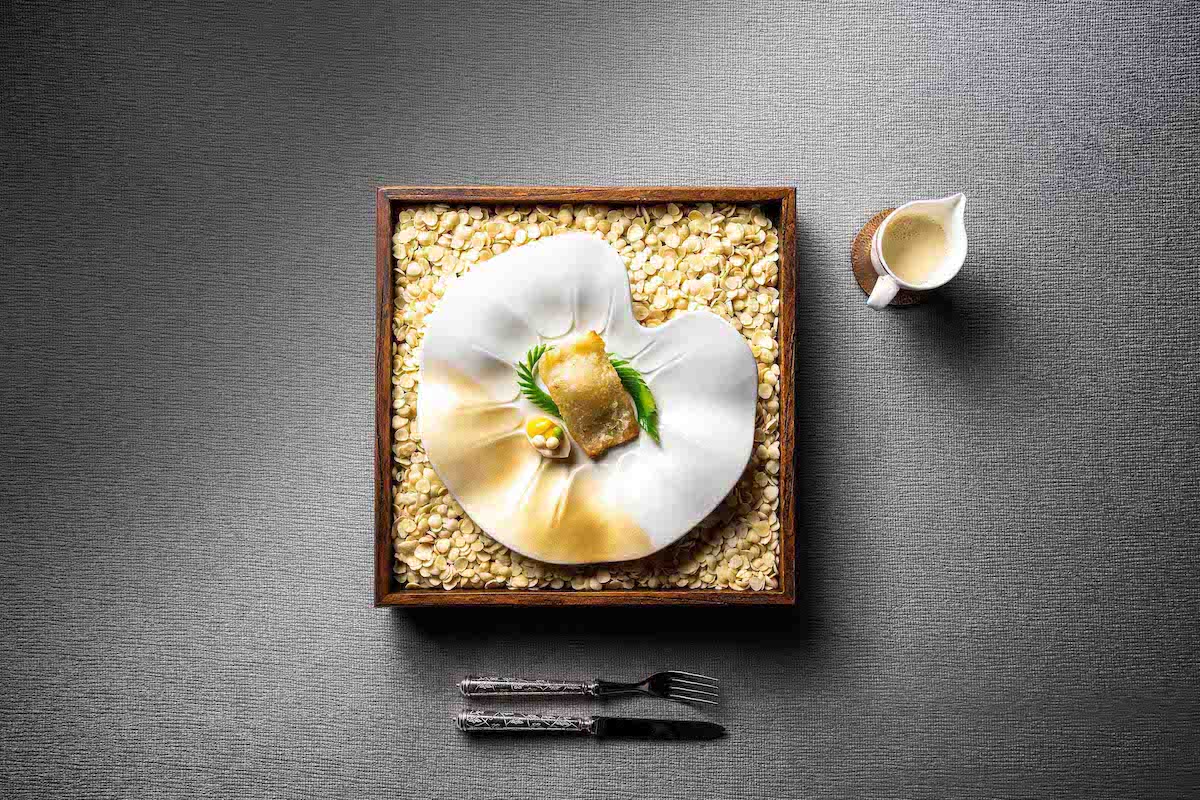 “We are like a football team. At first, we were just playing on the street, but now we are playing in a stadium.”

"For example, if the beef was not up to his standard, he would return them to the supplier and stop serving any food items with beef,” says Tang. "He has taught me that quality control of every dish is non-negotiable in order to provide guests with a satisfying dining experience.”

Describing his approach to traditional Cantonese cuisine as "authentic yet modern,” Tang takes pride in pushing the boundaries with classic recipes. His signature pan-fried fish maw with almond consommé—a favourite of MICHELIN inspectors—is a refreshing take on fish maw, a dried seafood ingredient commonly braised and served in a soup, and almond consommé, which is usually sweet rather than savoury.

An accomplished chef in his own right, Tang shares what it was like when Man Ho received its first MICHELIN star and what it means for his team.

When did you first hear about the MICHELIN Guide?

I first heard about the MICHELIN Guide when I was studying at the Chinese Culinary Institute CCI in 2004. MICHELIN-starred restaurants worldwide and famous top chefs were introduced during my study.

The MICHELIN Guide is globally well-known, and restaurants with a star status is a representation of delivering quality menus and dining experiences at the highest standards. From the Guide, I understand the importance of the quality of food and the consistency of dining experiences between visits, which has always been my priority in delivering food to diners.

Has winning the star changed anything at Man Ho?

It is a great honour and recognition to earn a MICHELIN star for Man Ho Chinese Restaurant. Winning the star does not change anything at Man Ho Chinese Restaurant, but it reassures me and my team’s efforts in delivering the highest culinary standards and delectable dishes. Also, it reminds us to uphold our delightful gastronomic dining experience so as to satisfy diners’ palates and bring fond memories to diners all the time.

Who’s the first person you called?

The day we got the MICHELIN star, I first reached out to the owner, and he happened to be having a meal at Man Ho. He came into the kitchen and gave me a fist bump. We did not say anything but we had tears in our eyes. I told the restaurant staff, "We are like a football team. At first, we were just playing on the street, but now we are playing in a stadium." Everyone was so emotional and understood why we all need to work hard together.