The Michelin Guide isn't in any of the Indian cities but that doesn't mean the red book is void of the subcontinent’s cuisine. In fact, Indian restaurants are listed in most of the territories with the Guide, some of which are in truly surprising cities. Tokyo for instance, is home to three Bib Gourmand rated Indian eateries, while the first Indian restaurant awarded with a Michelin star in Asia happens to be in Macau.

The food they serve is just as varied too. While most serve up North Indian fare – think naans and kebabs –others adopt the European produce of their home. Case in point: Benares in London, which uses Scottish scallops. But think that the cuisine’s South Indian brethren is left out and you would be mistaken. After all, the 2017 Michelin Guide San Francisco has retained the one-Michelin-star rating for Rasa restaurant which pays homage to classics like potato masala and flaky Kerala parathas.

Sounds yummy? Here's 8 Michelin-starred restaurants from around the world, with notes from our inspectors. 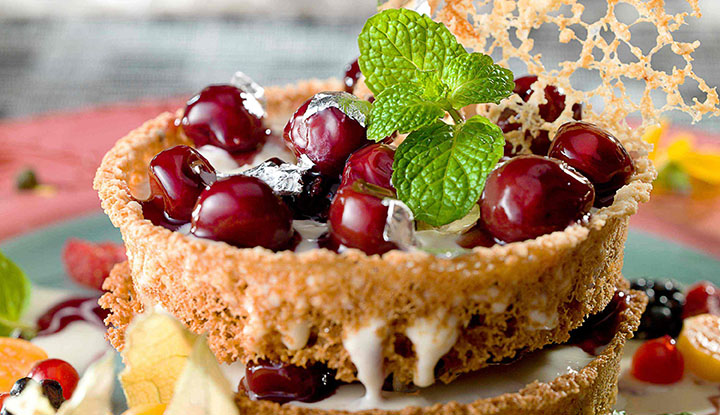 Ghevar with Spiced Cherry from The Golden Peacock in Macau. Photo Credit: The Golden Peacock.
The Golden Peacock
The peacock is India's national bird and is used for striking decorative effect at this contemporary Indian restaurant at The Venetian, along with copper, glass, screens and Sadeli mosaics. The chef hails from Kerala but his menu covers all parts of the country making good use of quality ingredients; through the window you can watch his team working with the tandoor oven. At lunch an appealing and good value buffet is provided. Shop 1037, 1F The Venetian Resort, Estrada de Baia de N. Senhora de Esperanca, Taipa, Macau.

The Song of India
The less-than-convenient location is quickly forgotten when you climb the few steps of this period bungalow and get your first glimpse of the restaurant. The stylish interior and regularly changing Indian artwork add to the appealingly sophisticated feel. The menu features delicacies from across India and the kitchen uses both traditional methods of preparation and more modern cooking styles to create an impressive array of dishes. 33 Scotts Road, Singapore.
Advertisement
Advertisement 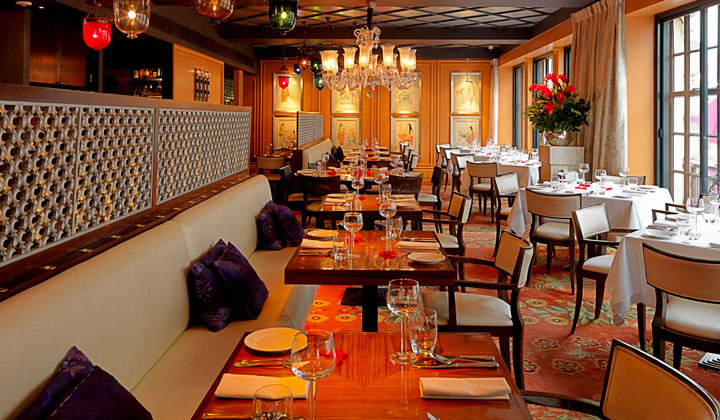 The interiors of Veeraswamy
Veeraswamy
It may have opened in 1926 but this celebrated Indian restaurant just keeps getting better and better! The classic dishes from across the country are prepared with considerable care by a very professional kitchen. The room is awash with colour and it's run with great charm and enormous pride. Victory House, 99 Regent St, Mayfair.

Tamarind
Makes the best use of its basement location through smoked mirrors, gilded columns and a somewhat exclusive feel. The appealing northern Indian food is mostly traditionally based; kebabs and curries are the specialities, the tandoor is used to good effect and don't miss the carefully judged vegetable dishes. 20 Queen St., Mayfair.

Benares (pictured in banner)
No Indian restaurant in London enjoys a more commanding location or expansive interior. Atul Kochhar's influences are many and varied; his spicing is deft and he makes excellent use of British ingredients like Scottish scallops and New Forest venison. The Chef's Table has a window into the kitchen. 12a Berkeley Square House, Berkeley Sq., Mayfair 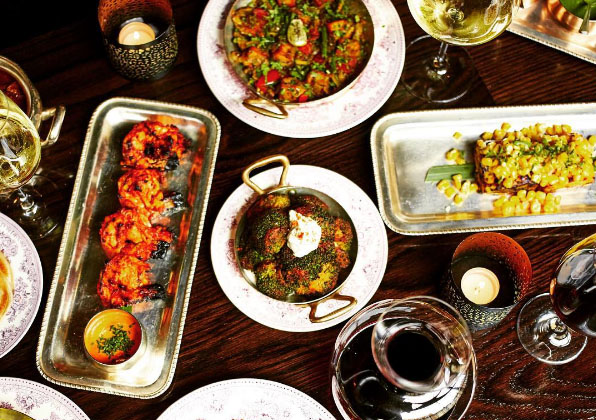 A selection of Gymkhana's dishes
Gymkhana
If you enjoy Trishna then you'll love Karam Sethi's Gymkhana - that's if you can get a table. Inspired by Colonial India's gymkhana clubs, the interior is full of wonderful detail and plenty of wry touches; ask to sit downstairs. The North Indian dishes have a wonderful richness and depth of flavour. 42 Albemarle St, Mayfair.

Junoon
Attention to detail is what sets Junoon far apart from its desi brethren. The façade is dramatic, but once through those ebony doors, the cavernous setting is welcoming and plush with treasures from the subcontinent. The large bar exudes class and fun, with two antique jhoolas (swings) crafted from Burmese teak. Then, walk through a 200-year-old wooden arch and carved panels beyond, seemingly afloat in a reflecting pool, to enter the amber-tinted dining room where tables are luxuriously spaced. The kitchen is patently ambitious and quite successful in presenting a contemporary vision of Indian cuisine. Every dish is thoughtfully composed and highlights only products of top quality.

Begin with a thick octopus tentacle sent to the tandoor, emerging crisped, charred, incredibly tender, and served with pickled purple potato as well as herb oil. Murg lababdar tastes of pure elegance in seared and braised de-boned chicken drenched in a sweetly spiced, deeply flavored tomato-onion gravy. The creamy and exceedingly juicy shahi lamb shank is enriched with rose petal-garam masala, cumin, and coriander; while stout cake coddled with orange- and pink peppercorn-meringue is as unexpected as it is divine. 27 W. 24th St., New York. 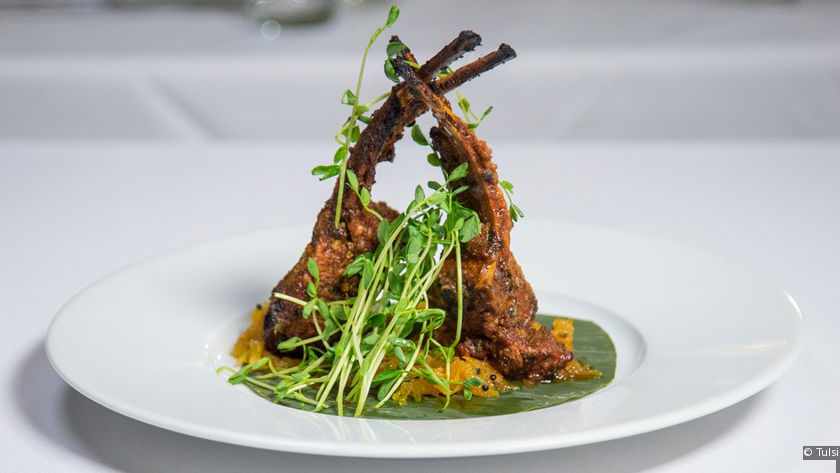 One of the dishes at Tulsi.
Tulsi
Anyone who loves their Indian food but got jaded by the generic ghee-heavy menus of Curry Hill should head along to Tulsi. In place of the seizure-inducing colored lighting, this midtown favorite offers billowing muslin and neutral tones; and instead of the usual Bollywood clichés, it provides tranquil, sophisticated surroundings, and attentive, sweet natured service. The menu is also markedly different from the norm.

For the appetizers, the kitchen takes the sort of snacks you can find streetside on Chaupati and, by putting its own spin on them (and using primary ingredients), raises them to new heights-such as with the white beans of ragda chaat, which is a great way to start your meal. You can also go Goan for some Portuguese influence with the succulent shrimp balchao. But, be sure to leave room for authentic goat biryani served on the bone, or something from the tandoor like those tender lamb chops. As a nod to local tastes, spicing can be a little timid but those who are familiar with India-and anyone who knows their silly mid-on from their backward point-will still find much to savor. 211 E. 46th St., New York. 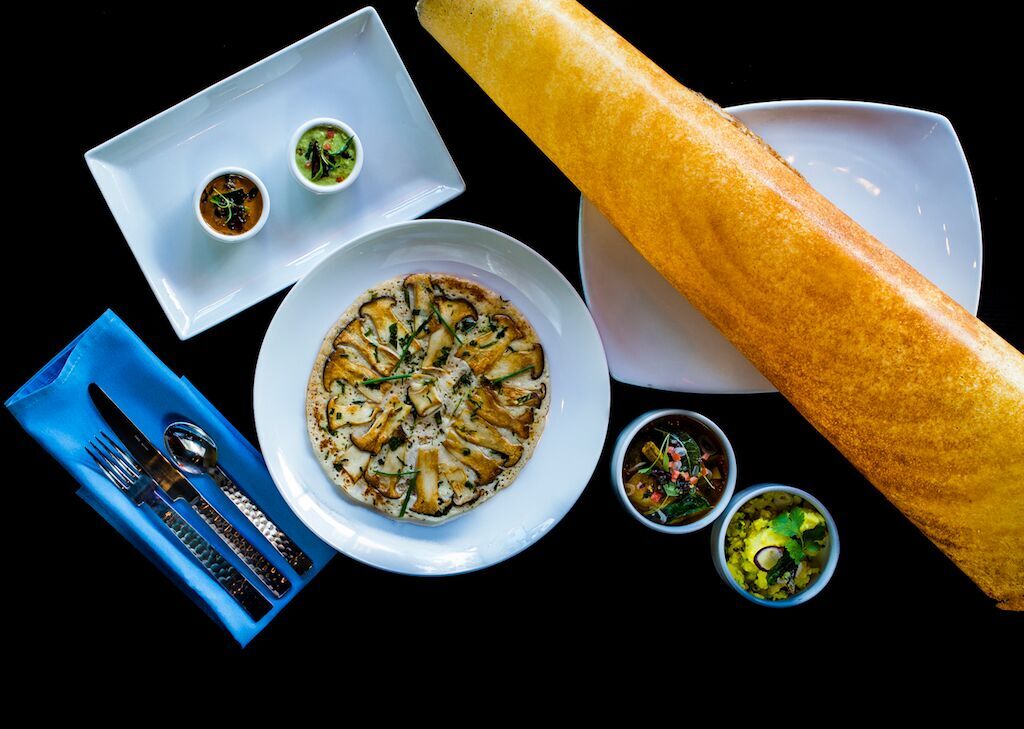 Some of Rasa's signature dishes.
Rasa
In a bustling tech corridor that's also home to Indian expats with high culinary standards, Rasa has managed to find the perfect middle ground. No-joke dishes that aren't toned down for Western palates cater to the likes of software execs and area couples, and though the bi-level space boasts a gorgeous, minimalist-mod décor with bright splashes of orange, sleek pendant lights, and stylish dark wood fittings, the focus here is on food. The kitchen excels in elevating the cuisine of South India with solid technique and superlative ingredients.

Get the party started with dahi vada (crispy fried lentil fritters buried in smooth yogurt), before savoring a basil-chutney dosa starring a crisp rice-lentil crêpe stuffed with potato masala and served with basil chutney as well as an ultra-spicy ghost chili version-to be risked by hardcore hotheads only. Each plate is carefully composed, as shown in the complex Andhra chicken curry, enriched with coconut and bobbing with tender dark meat. Sop up the pungent sauce with a flaky Kerala paratha, and then cool down over a creamy and smooth chikku frappe, which blends the eponymous pear-like fruit with vanilla ice cream and candied rice puffs for a captivating finale. 209 Park Rd., Burlingame.
Advertisement
Advertisement