While it sounds like a technique that could be used in the year 2050 in the galley of a spacecraft, cryoconcentration is being performed in kitchens today right here on earth. It was developed by the man known as the father of sous vide, Dr. Bruno Goussault, in his Culinary Research & Education Academy (CREA).

Cryoconcentration is the process of "concentrating any liquid by removing water without
thermal treatment," explains AJ Schaller, the executive chef at CREA. The goal is to rescue food scraps or trim and produce an intense liquid that can be used to enhance the flavor of a dish.

Instead of heating, cryoconcentration relies on freezing. It's superior to thermal concentration methods such as boiling or evaporating because it preserves the flavor and nutrition of the product.

"If you've ever made a braise at home, like if you've done a stew or something that's on the stovetop, your whole house smells good, but it's because the vapors are coming out of it, so a lot of the essential volatile aromas and flavors are escaping with it," Schaller explains. "By applying heat, you're also changing the flavor. When you use cryoconcentration, it doesn't have as cooked of a flavor."

Using freezing temperatures to concentrate instead means you keep all the flavor and nutrients and only remove the water. "We actually do a comparison of one extract that's boiled, one that's run through the rotary evaporator, which is a combination of heat and vacuum pressure, and one that's cryoconcentrated. If you try them side by side, the most pure and intense flavor is going to be [from] the one that was cryoconcentrated," Schaller says.

Before the cryoconcentration process can begin, you must first render flavor into liquid form using sous vide extraction. "The idea of the extraction is taking something that might normally be discarded, like artichoke leaves or mushroom stems, and combining it with a certain amount of water and cooking [it] sous vide at a low temperature for a long time."

In the vacuum-sealed sous vide pouch, the flavors and nutrients will leech from the food scraps and be absorbed by the water, resulting in a flavorful liquid.

After the extraction is complete, the liquid can be cryoconcentrated. From this point forward, it will not be exposed to heat. Instead, it is frozen, and as it thaws, the water is removed in the form of ice. "What you're looking for is the eutectic point, which is the temperature and texture at which the water freezes but the concentrated liquid is not frozen," she explains. 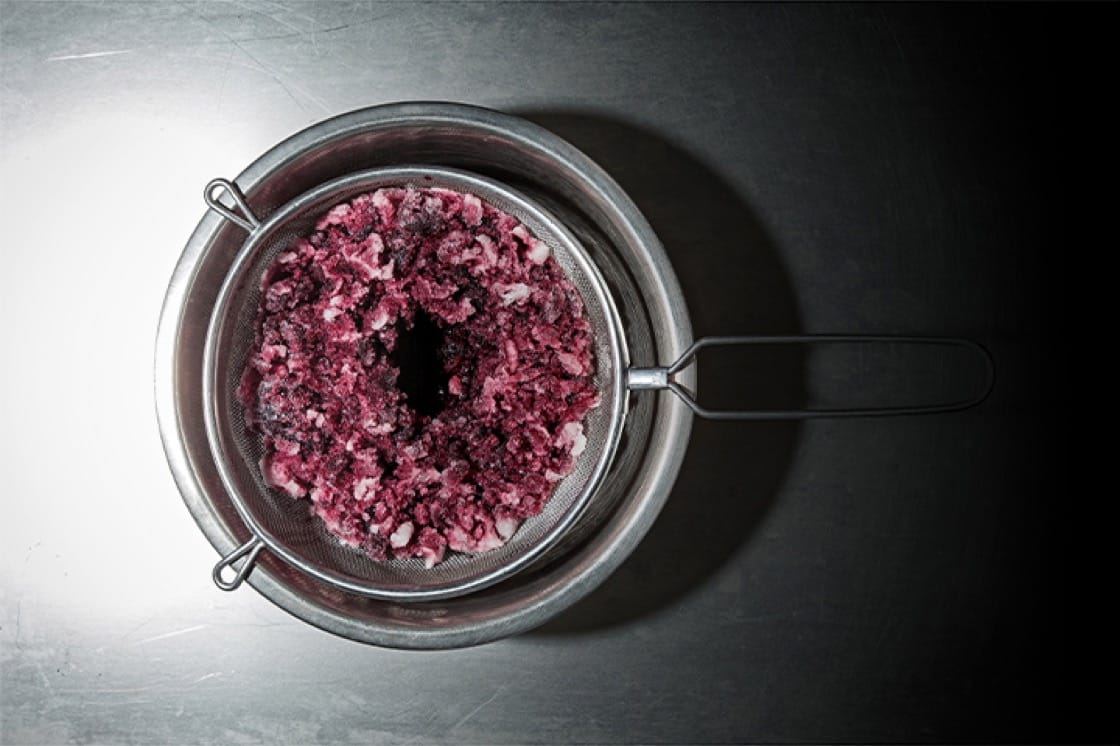 In cryoconcentration, the liquid is frozen and as it thaws the water is removed in the form of ice. (Photo courtesy of Cuisine Solutions.)

"If you've ever had a slushie and you leave it in your cup holder for too long and then you come back and all the ice is kind of frozen on top and the syrup's sunk to the bottom, same concept," she explains.

Freezing and thawing can be repeated as many times as necessary to achieve the desired flavor. "Sometimes we get to the point where we've cryoconcentrated it so much it doesn't even freeze anymore. It's like a distilled liquor," she adds.

"When we cryoconcentrate something that's naturally sweet like beets, it becomes more and more and more sweet, but the concentration is not just of the sweetness, it's anything soluble," she says. "[With] mushrooms, for example, the saline is increased, and it tastes pretty salty or umami-like, like soy sauce."

CREA has a food engineer on staff to fine-tune the technique and develop formulas for the process, but you don't need to have a chemistry degree or fancy laboratory equipment in order to play around with cryoconcentration.

In fact, the academy trains chefs around the world to utilize the technique in their kitchens. Thomas Keller, Daniel Boulud and Joël Robuchon have all sent their teams to CREA for the course. "We host courses here approximately four times a year for the extraction and cryo, and there's a really long waiting list, because it's such a new, fun technique, everybody wants to come learn how to do it," Schaller says.

Jean-François Bruel, the executive chef at Daniel, was one of several members of his kitchen team that attended the training. "It was eye-opening, the different flavors you can extract," Bruel says. He has added the liquids to dishes like emulsions and consommés.

"Artichoke is something that is naturally bitter, but when you cryoconcentrate it, it actually loses some of the bitterness. Mushrooms are one of the more intense [foods]. You almost get a truffle flavor," he says. "We also used cryoconcentration for white asparagus when it was in season."

Like canning or pickling, cryoconcentration allows chefs to preserve the harvest—or the waste from the harvest. It's an efficient way to store the essence of an ingredient when it's in season and use it year-round.

In the kitchen at Daniel, Bruel and his team use cryoconcentration frequently. "We have a blast freezer, so we actually can go pretty fast," he says. "We can do the process a couple times in the same day."

"It's just a lot to organize. You need a lot of volume of scraps at the beginning to get a little bit of intense liquid," he adds. It can also take up a significant amount of space to do the initial extraction. After the liquid volume is reduced, the storage space required is minimal. 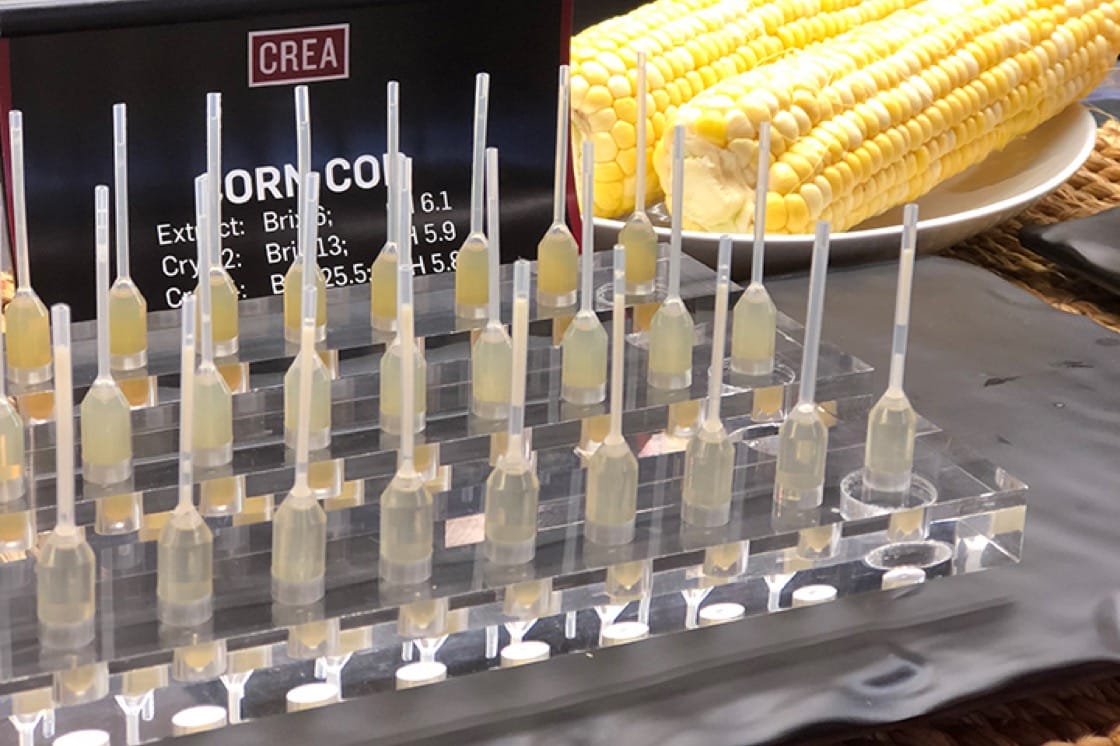 The CREA team has done lots of cryoconcentration trials on a variety of products, including corn cobs and husks. (Photo by Lani Furbank.)

The CREA team has done lots of cryoconcentration trials on a variety of products, including sunchoke peels, corn cobs and husks, carrot peels, pineapple cores and aquafaba. Schaller found that aquafaba concentrate was the perfect stabilizing agent for mayonnaise. For sweeter items like corn and pineapple, the brix level (a measure of dissolved solids) is so high that the liquid can be used to make sorbets, desserts or cocktail syrups without the need for added sugar. Savory liquids are ideal for boosting the flavor of sauces, soups and more.

Cryoconcentrated liquid is not only intense in flavor, but also in nutrition. The nutrients from the scraps are extracted and are not compromised during the concentration process. "Nothing is escaping, we didn't boil it, and then we're just removing water, so by proxy it'll be more nutritious," Schaller says.

Alongside all the culinary and nutritional benefits, the waste reclamation potential of cryoconcentration is one of its biggest draws. Schaller says that's part of the reason demand for the class is so high. "Everybody's worried about food waste, and it's a good way to utilize it."

Chefs like Bruel can pull every ounce of value from their scraps. "You use 100% of the product," he says. "You extract all the flavor, even from the pieces you wouldn't serve."

Additionally, CREA has partnered with local produce companies to use food scraps from pre-cut fruits and vegetables as another way to combat waste.

After they've outlived their usefulness in the kitchen, the scraps can still be turned into compost, restarting the cycle in the field. "Cryoconcentration is a completely full-use process," Schaller says.