Chef Paul Kahan shares the recipe for one of The Publican's staple dishes.

Paul Kahan is a force of nature when it comes to the Chicago restaurant scene. With a slew of noteworthy restaurants to his name, The Publican is his third establishment that has been a mainstay in the city for nearly a decade. "As expected from the portraits of pigs displayed throughout the room, pork takes precedence here," state inspectors.

In the early years of his restaurant empire, Kahan and his wife would host staff barbecues at their home. One of the regular dishes where pork country ribs brought by his friend Jason Monroe and his wife Diana. Kahan loved them so much that he asked for the recipe. "'Guys, if you give me this recipe, it will be at The Publican always, and you can forever eat in our restaurant for free,'" he shares in his book, Cheers to the Publican. "They said yes, and the rest is history."

The marinade has been modified with Asian-inspired ingredients, but the dish remains a staple on The Publican's menu to this day. This recipe calls for pork country ribs, which come from the shoulder blade and are not to be confused with traditional ribs. "They're excessively fatty by nature, so you want them to be charred to the point where you don't know whether you're eating meat or fat," Kahan shares in his book.

At the restaurant these ribs are served with charentais melon (a type of cantaloupe), jalapeño farmer's cheese, shishito peppers and sunflower seeds. Kahan shares that the dish can be topped with seasonal grilled tomatoes and herbs or a watermelon and sungold salad, as the recipe calls for in the book. 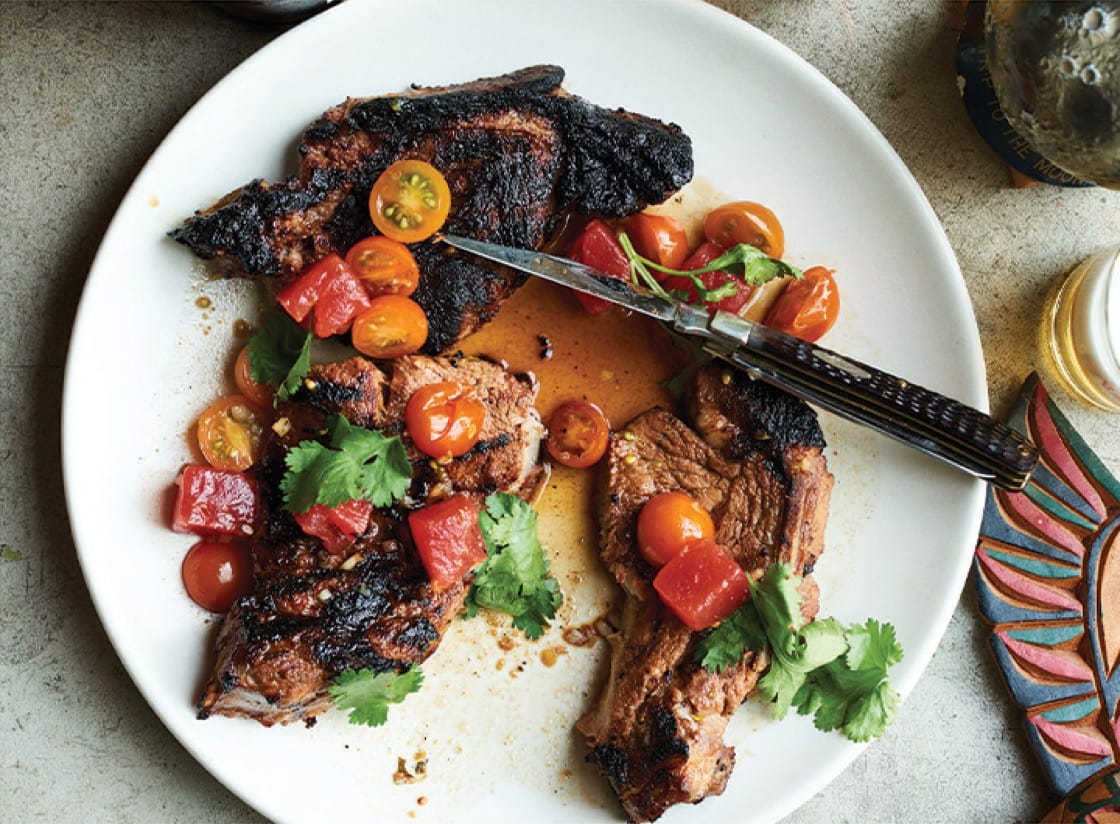 Reprinted with permission from Cheers to the Publican by Paul Kahan and Cosmo Goss with Rachel Holtzman, copyright © 2017. Photography by Peden + Munk. Published by Ten Speed Press, an imprint of Penguin Random House. Available wherever books are sold.

2. Slather the ribs in the mustard, then submerge them in the marinade in the resealable bag. Let them marinate in the fridge for at least 6 hours, or as long as overnight.

3. Build a fire on one side of a charcoal grill and let it burn down to embers.

4. Start the ribs on the hot part of the grill—you're really trying to get a char, so you want to brown and even burn any fat on there. Cook for about 1 minute 30 seconds, flip, then dip the ribs back in the marinade. Put them back on the grill and repeat three more times, so the ribs cook for about 12 minutes total. Serve.

Michelin at Home Washington D.C.
All articles of Dining In