Kwame Onwuachi first emerged into the consciousness of the food world at large with his fairly successful run on Top Chef season 13. Then we all waited with bated breath for years in anticipation of Shaw Bijou, which closed shortly after it opened due to a confluence of factors related to the media, his business partners and the financial realities of opening a restaurant. Subsequently, many rejoiced as he triumphantly resurfaced as the chef of Kith and Kin in Washington, D.C., and later with Philly Wing Fry, his budding fast-casual chain.

RELATED: Kwame Onwuachi Returns to the D.C. Restaurant Scene with Kith and Kin
I, and likely much of chef-obsessed America, thought I had a pretty good idea of Onwuachi's story, having even spoken with him previously to cover the opening of Kith and Kin for this site. But with his memoir Notes From a Young Black Chef, published by Knopf this month and written with Joshua David Stein, Onwuachi lays bare his life, telling us that we only really knew a small fraction of his journey thus far. His book delves far deeper and talks more holistically than what some television producers, investors and journalists have portrayed him as. This is him telling his own story, unabridged and unfiltered.

Yes, there are some recipes. These include chicken curry reminiscent of the version from his childhood neighbor-cum-babysitter in the Bronx; his Grandma Cassie's shrimp étoufée, a dish he served aboard the Maine in the Gulf where he first felt like a chef; and as a nod to his time at the Culinary Institute of America (CIA), chicken consommé with charred vegetables, verde and feta. There are also tons of lessons for those new to the industry about what it takes to become a chef, the challenges people of color face in professional kitchens and some of the things to think about when courting investors. However, the paramount lesson I picked up in Onwuachi's words is a view into what it can look like to be an African American man in the United States, regardless of his profession.

Below, I talk with Onwuachi about how this book came to be, the writing process, the reaction from his family and the industry and more.

The following interview has been lightly edited for length and clarity. 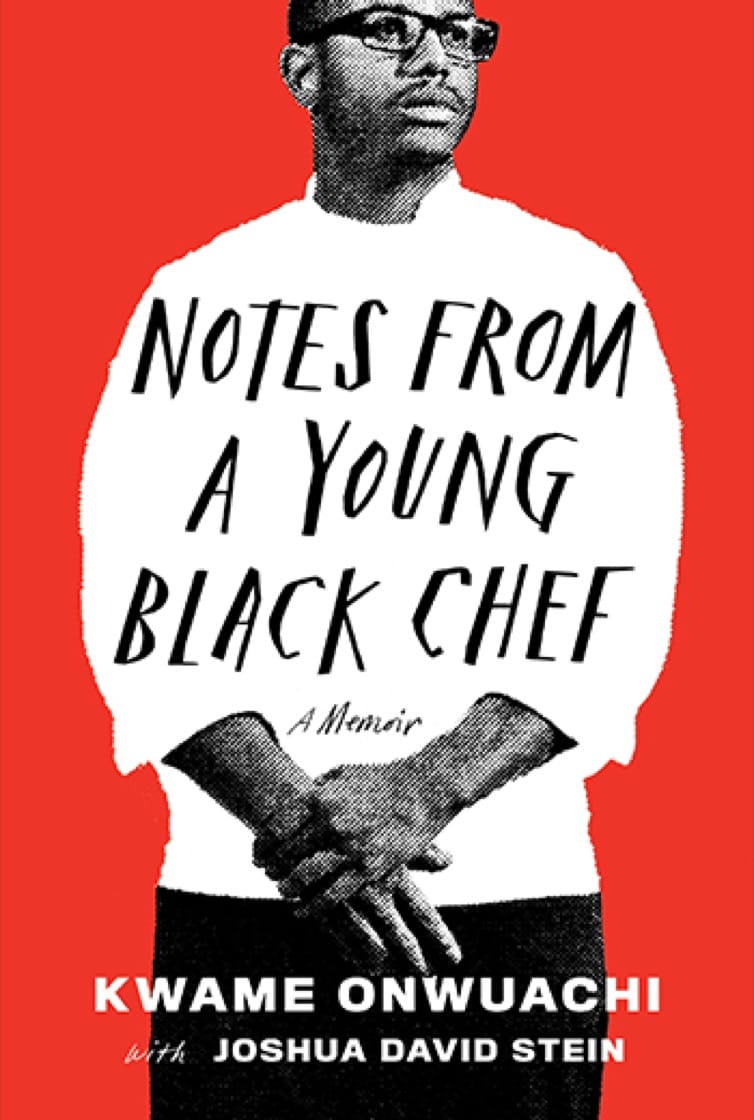 You started writing this book long before you reached national fame—how did it come about?
I was just telling my life story at Bitten, a food conference in New York City. There was a literary agent in the crowd and she said that I should turn this into a book. So I wrote a proposal and that was that.

When some people think of a memoir, they picture a book usually written towards the end of one's life, yet you're not even 30. What made you want to write this book now?
Life isn't promised tomorrow. I had an opportunity to write a memoir, so I took it. I don't know if I'm going to be alive in a month.

What was the most difficult part about writing this book?
It's a very therapeutic process talking about things that aren't very favorable in your life. Also, just getting it all out there.

How did it feel to be so raw and open in this book?
It's always a scary thing when you're being honest. It feels good at the end of the day because you're getting your truth out there, and I think with me being honest it's showing people that it's an actual life story, not a Cinderella one. There are ups, there are downs. There are happy times, there are times you want to cry. But that's life.

A lot of the media has already talked about the fact that you named names regarding the racism, both overt and more subtle, you encountered in your career. What has been the reaction from the industry?
I've had a lot of people of color reach out and thank me for making them not feel crazy about instances that have happened to them. The same with people that have worked in these places and they've felt they same thing. It's very validating when you are either inspiring someone or someone can empathize with you and let you know that you're doing the right thing by speaking up. Though it's uncomfortable sometimes, I think it's necessary for change, and hopefully it will spark a discussion within these establishments and beyond.

Do you think there has been any change on that front between when you finished writing the book and now?
No.

Was there anything that you left out that you wished you talked about?
It's really hard writing a story about your life because you only have so many pages, so you can't include everything. I think I got most of it in there. Though talking about Kith and Kin would have been cool, this book—like everything else—was on a deadline.

How has your family reacted to the book?
They're very happy for me. Most of my family knows a lot of the things I wrote about already, so nothing was a big surprise. I'm very open and close with my mom. There were a couple of things that she raised her eyebrows at, but I don't think she would put anything past me.

There's a chapter dedicated to getting into the CIA and your hustle to make sure you could stay enrolled. Do you think you would recommend someone starting out today go to culinary school?
Yeah, absolutely. It's not necessary for everyone—even when I went to culinary school I had a lot of experience—but it can change your perspective a little bit and open your eyes to things that you may not have been thinking about. So if you can afford to go, go. And if you can't afford to go, then figure out a way to. But if you don't want to go, don't think that you have to in order to validate you as a chef—that's going to come from within.

Has there been any reaction to the book that has surprised you?
The positive reviews. It's not surprising, but it's always shocking when people like something that you do, and especially something as personal as your own story. For the book to be welcome with open arms was a little shocking. I didn't know how it was going to go, but I would have been shocked either way, to be quite frank. People of all walks of life, all colors, people not even in the industry—they're finding the book inspiring, and that's what it's all about.

I feel like it's a food book because you're a chef, but there's so much more about it that's just applicable to everyone about life in general. Also, I think it will expose a lot of people to the realities of being a Black man of our generation in this country.
Absolutely—that's one of the main focal points. I'm really happy that you get it so blatantly.

This may be premature, but do you think that you'd want to write another book further down the line?
Yeah, definitely.

Laurent Gras Takes Over as Executive Chef at Saison

With Skenes Ranch slated to open later this year, Joshua Skenes has officially handed over the kitchen.