It’s Not an Airbnb, It’s an Un-Hotel

Live like a local, and a royal one at that, but with the safety net of a concierge. Such was the promise offered by Butera 28, self-catered apartments located inside the Palazzo Lanza Tomasi in the historic center of Palermo, Sicily—and run by a Duchess, no less.

It was close to midnight when we arrived and Nicoletta Polo Lanza Tomasi, the Duchess of Palma di Montechiaro herself, was waiting outside the massive wooden door of the palazzo which led into a courtyard. She guided us up to the third floor to a spacious one-bedroom apartment with a terrace overlooking the Tyrrhenian sea. The apartments are basic compared to say, the Four Seasons, but who cares when the ceilings are high and you’re walking on Majolica tiled floors? 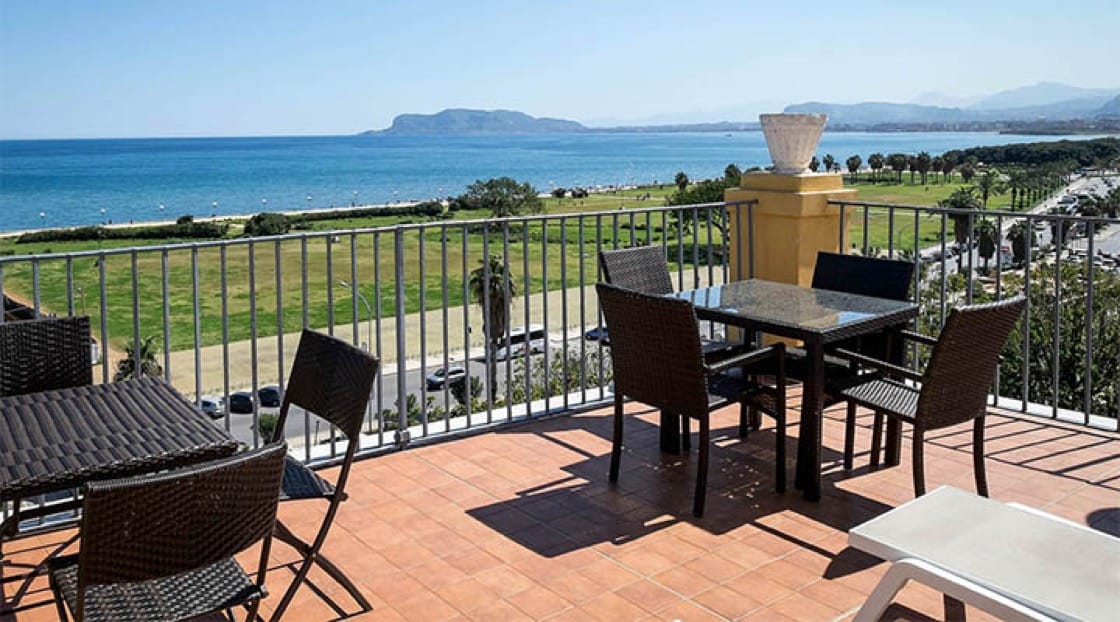 Nicoletta, as she prefers to be called, pointed out all the workings of the apartment, asking us to turn off the lights and the air conditioning when we went out—“we don’t like to waste anything.” She cautioned us not to close the cooktop of the stove when burners were lit because three previous guests had “exploded” it. “Everything you need for breakfast is here,” she said, showing us the milk and butter in the refrigerator, the coffee and the Bialetti Moka stovetop espresso pot. The kitchen is fully equipped for guests tempted to bring home the bounty of the market and whip up their own Sicilian dishes. 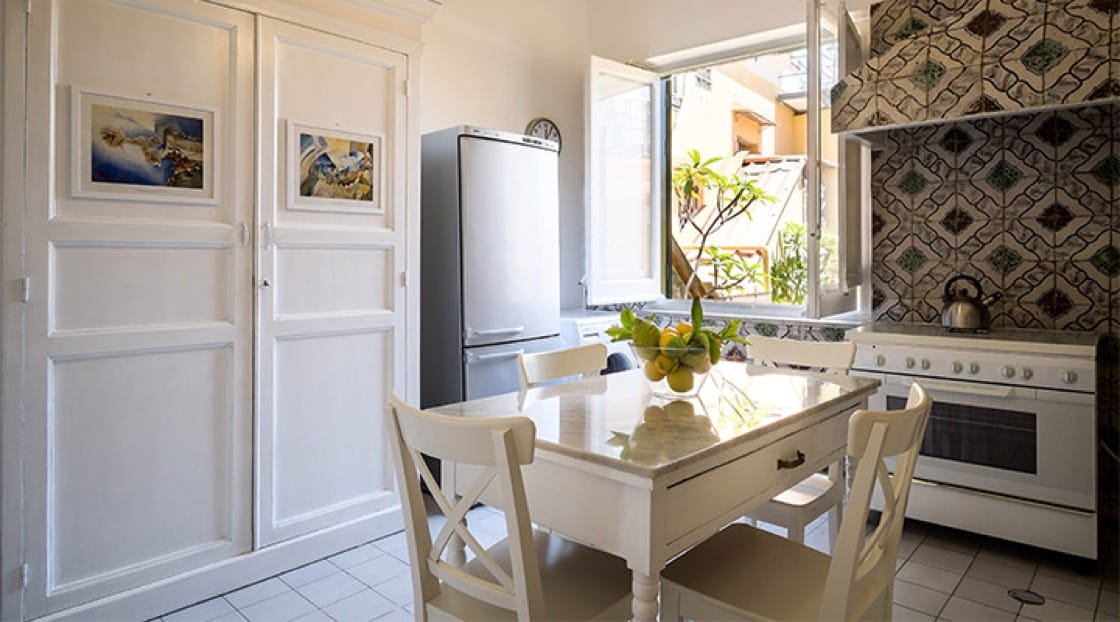 She provides a binder of instructions and a list of sights and recommended restaurants, such as the modern Michelin-listed L’Ottava Nota across the street and the traditional Sicilian trattoria La Cambusa a few blocks away. She will arrange a driver and guide for day trips to such destinations as Mount Etna or the wondrous Monreale cathedral, said to be the finest example of Norman architecture with an interior covered in mosaics head to toe. She gave us two tiny keys, one for our apartment door and the other improbably small for the massive wooden exterior door decorated with a lion’s head knocker.

In the morning, we enjoyed espresso on our terrace and realized what a short walk it was to the waterfront. We then joined the Duchess for a trip to the market and then back to the palazzo for her cooking class of Sicilian specialties. 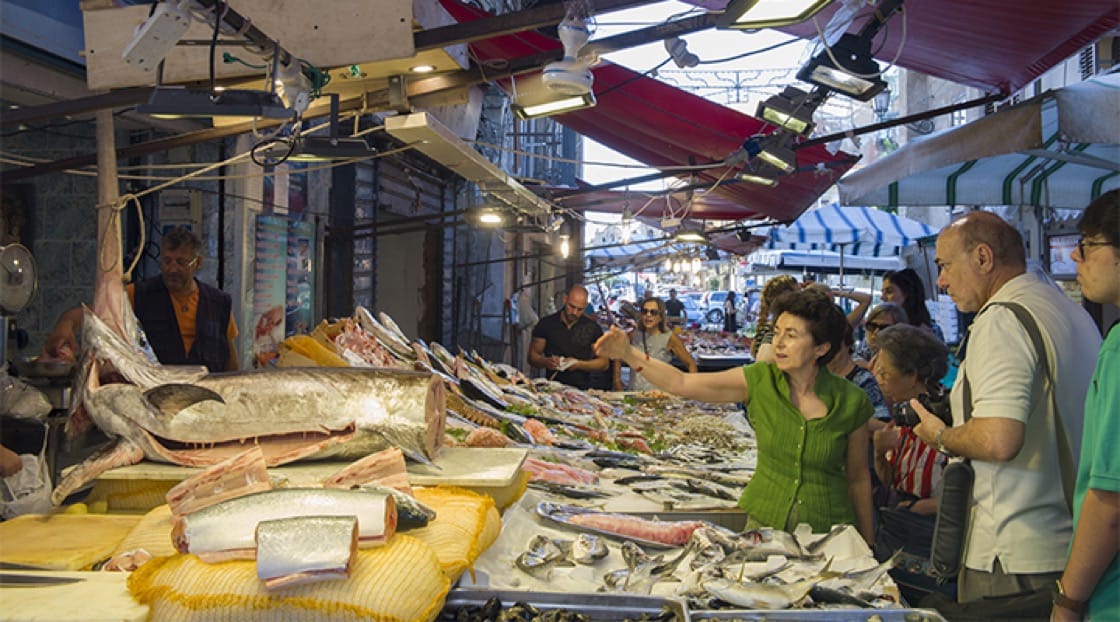 Sicily was conquered numerous times over the centuries—by Greeks, Romans, Normans, Arabs, you name it, and the cuisine reflects all those rich influences. It became part of Italy in 1860. The story of unification was immortalized in the novel The Leopard, written by Giuseppe Tomasi di Lampedusa in this very palazzo where the original manuscript is on display in a formal drawing room.

Along with other guests from Australia, California and the British Isles, we prepared stuffed sardines, a simple tomato sauce for pasta to be topped with bread crumbs rather than cheese, a roasted pepper and olive salad, bruschetta topped with caponata and an almond milk biancomangiare for dessert. Then the class sat down at her regal dining table set with silver and china emblazoned with the family crest. Though we had cooked our own lunch, we were served by a white-gloved staff. While we ate, the Duchess recounted the history of the palazzo. 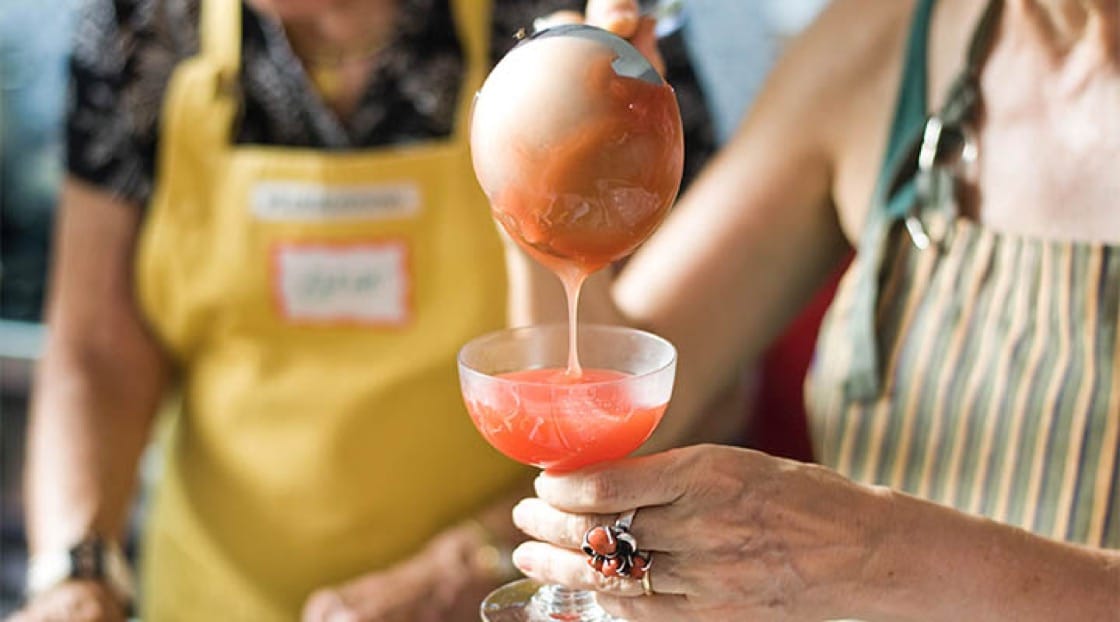 The Duchess pours gelo di mellone—or, watermelon pudding—into a Champagne glass before letting it sit in the fridge to set.

Nicoletta’s husband, Duke Gioacchino Lanza Tomasi, inherited part of the palazzo from his cousin and adoptive father, The Leopard author Giuseppe Tomasi di Lampedusa. In the late 1960s he bought the remaining part and began what would be a 10-year restoration.

They carved out a dozen apartments whose rents defray expenses and a palatial living space for themselves. In 2010, Nicoletta started giving market tours and cooking classes. “It was a start-up,” says the former translator and music festival organizer with a smile. But it quickly became a serious business, catering mostly to English-speaking tourists from all over the world.

Then the Duchess and Duke gave a tour of their own apartment complete with a ballroom, two impressive libraries, and so many smaller rooms she has lost count.

No way would we trade this for a conventional hotel. The stay was a window—not only into the culture and cuisine of Sicily—but a frank look at what it takes these days to maintain a palace.