The MICHELIN Guide France 2019 selection recognized an impressive total of 632 establishments with stars this year, and broke new ground with a record 75 dining establishments gaining either one, two or three stars.

Most notably, 10 freshly-minted one-starred restaurants have female chefs in top positions. In another nod to female power in the kitchen, modern haute Parisian restaurant La Scène, which is helmed by Stephanie Le Quellec, also earned its second star.

Let's take a look at the women in the limelight. 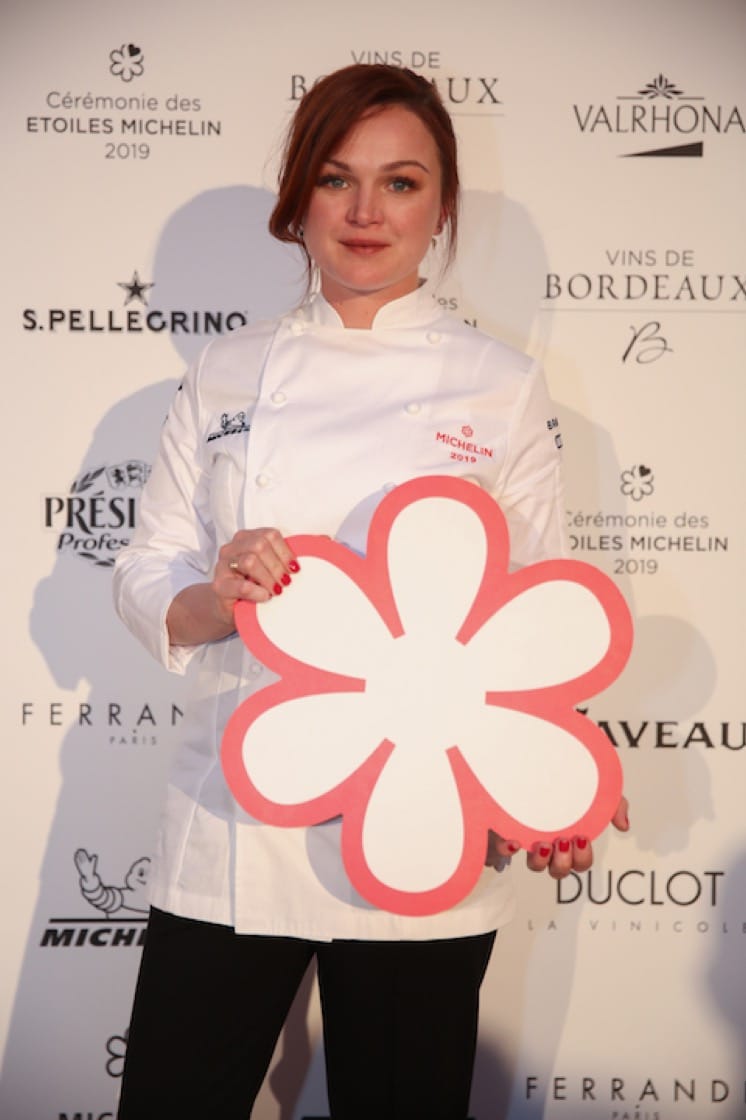 Nolwenn Corre heads the kitchen at the Hostellerie de la Pointe Saint-Mathieu. The graduate of the renowned Institut Paul Bocuse inherited her love for cooking from her father, Philippe, and she has worked under top chefs such as Yannick Alléno and Jean-Luc L'Hourre. At her restaurant, she creates stunning dishes using produce from Brittany such as lobster, langoustine and monkfish.

What Our Inspectors Say: "Attention, here‘s a nice surprise in the West! In a setting filled with contrasts, monumental fireplace and contemporary furniture, the young chef is determined and confident. Recipes are refined and visually impressive. The superb produce are cooked with accuracy and the food is good value for money."

One half of the dynamic couple that runs this hotel restaurant in Carnac, Laetitia Cosnier is known for using fresh and seasonal produce in their restaurant's simplistic cuisine. Signature dishes include langoustine with kari gosse and lamb with spring vegetables. After working in the iconic Taillevent restaurant in Paris, Laetitia and her husband Stéphane also ran Le Petit Comptoir bistro, which received Bib Gourmand status until it shuttered in 2011.

What Our Inspectors Say: "Inside the Hôtel Lann Roz, a two-man team works unassisted to produce flavorful and extremely tasty dishes that beautifully showcase regional produce. The cuisine can be enjoyed by the fireplace in winter or on the pleasant terrace in fine weather."

A native of the island nation of Mauritius in the Indian Ocean, pastry chef Karina Laval is an integral part of this historic hotel restaurant's concept, which features a marriage of flavors fusing indigenous produce from Burgundy and Mauritius. Laval is known for her desserts such as passion fruit and mango mousse with grapefruit zest sablé, sorbet and stewed citrus fruit and crunchy hazelnut Maracaibo chocolate with a soft praline ganache. In 2017, she took part in the prestigious Meilleur Ouvrier de France contest, which recognizes the best French craftsmen.

What Our Inspectors Say: "A majestic setting for an elegant menu. One of its dining rooms is in the former château kitchens. The chef, who is from Mauritius, pays a fitting tribute to vegetables from the estate's magnificent garden, and noble ingredients in general, which are sprinkled with exotic touches. The list of Burgundy wines is remarkable." 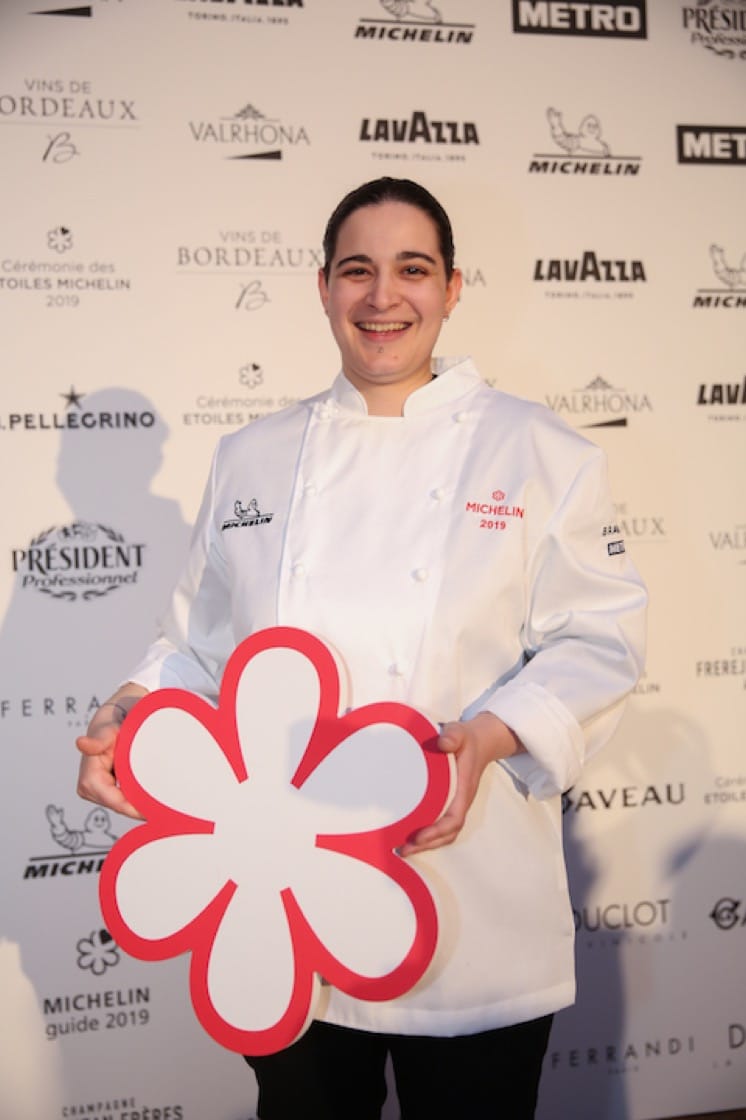 Chef Julia Sedefdjian is only in her early twenties, but she already has a resume that is the envy of many. She honed her craft in Les Fables de la Fontaine, where she was promoted from sous chef to the head chef who led the restaurant to earn its first star when she was just 21 years old. These days, she runs her own restaurant, Baieta, which means "kiss" in Niçoise dialect, in the Latin Quarter in Paris. The menu, which is inspired by flavors from her hometown of Nice, features main courses such as line-caught Pollock fish with seasonal vegetables, quail egg and crispy mussels and roast sea bass with leeks, shellfish, green curry dressing and salicornia.

What Our Inspectors Say: "The youthful chef Julia Sedefdjian is now happily thriving in her own establishment. Her colorful, fragrant cuisine is an ode to the Mediterranean, illustrated by the painstakingly selected ingredients that she blends creatively, without forgetting her Nice roots. You will sample a caramelized pork breast or a generous skate wing sautéed in golden butter. Welcome to the Baieta—which means “kiss” in the Nice dialect."

Born in Saint-Ouen-l’Aumône in north-central France, chef Naoëlle d’Hainaut got her big break in the culinary world when she won the French edition of cooking competition show Top Chef in 2013. These days, d’Hainaut is the chef de cuisine of L’Or Q’idée in Cergy-Pontoise, which is known for its traditional French gourmet cuisine. Diner favorites include Erquy red mullet rolled in nori sheet and roasted pigeon with wild flowers.

What Our Inspectors Say: "Chef d’Hainaut chose a small side-street of the center of Pontoise to open her first restaurant. The result is an elegant Scandinavian-inspired interior and flavorsome dishes in keeping with modern tastes." 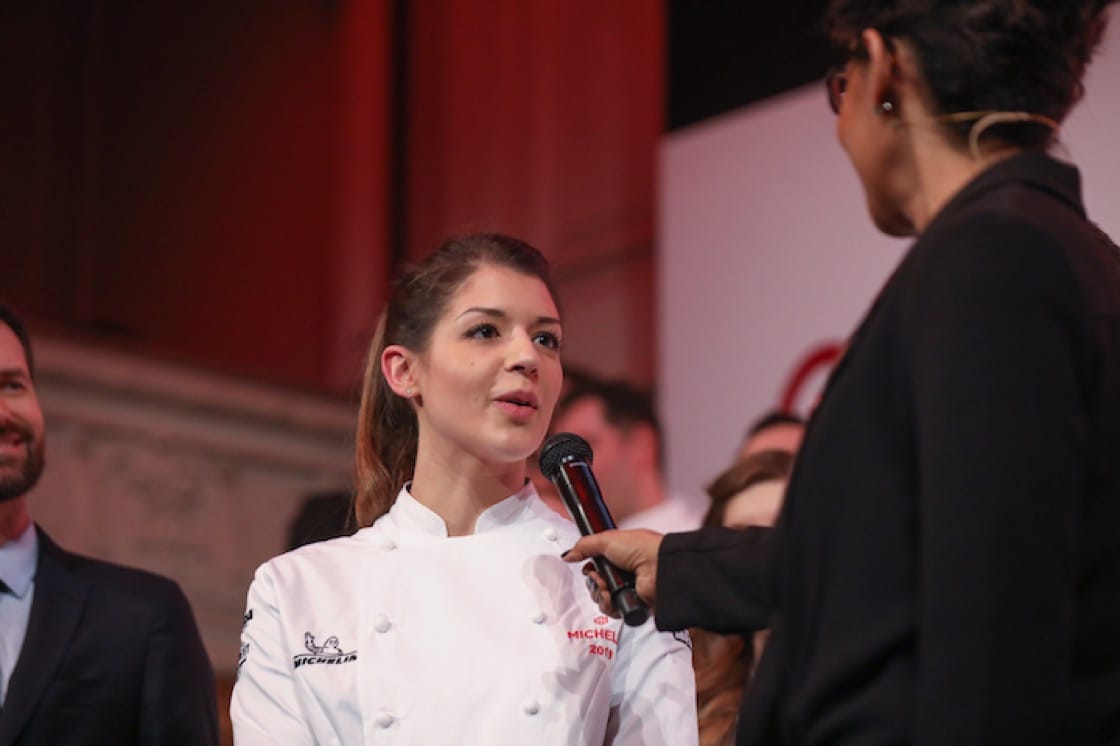 Camille Pailleau helms the pastry section at Rozo in the heart of old Lille. Pailleau has honed her craft in well-known French establishments such as Le Meurice, Plaza Athénée and Prince de Galles. In 2017, she teamed up with chef Diego Delbecq to start Rozo, an innovative restaurant. Pailleau's sweet creations include grapefruit meringue and dark chocolate tart.

What Our Inspectors Say: "At the helm of their restaurant in Vieux Lille, Delbecq and Pailleau make an enthusiastic duo. Delbecq showcases all he has learned over the course of an impressive career (having worked with Marc Meurin and Alain Ducasse) and already has his own distinctive signature dishes: cooked, raw and pickled mushrooms with acidulated watercress; lamb with shellfish and “marine” potatoes. This restaurant has elegant and contemporary interiors." 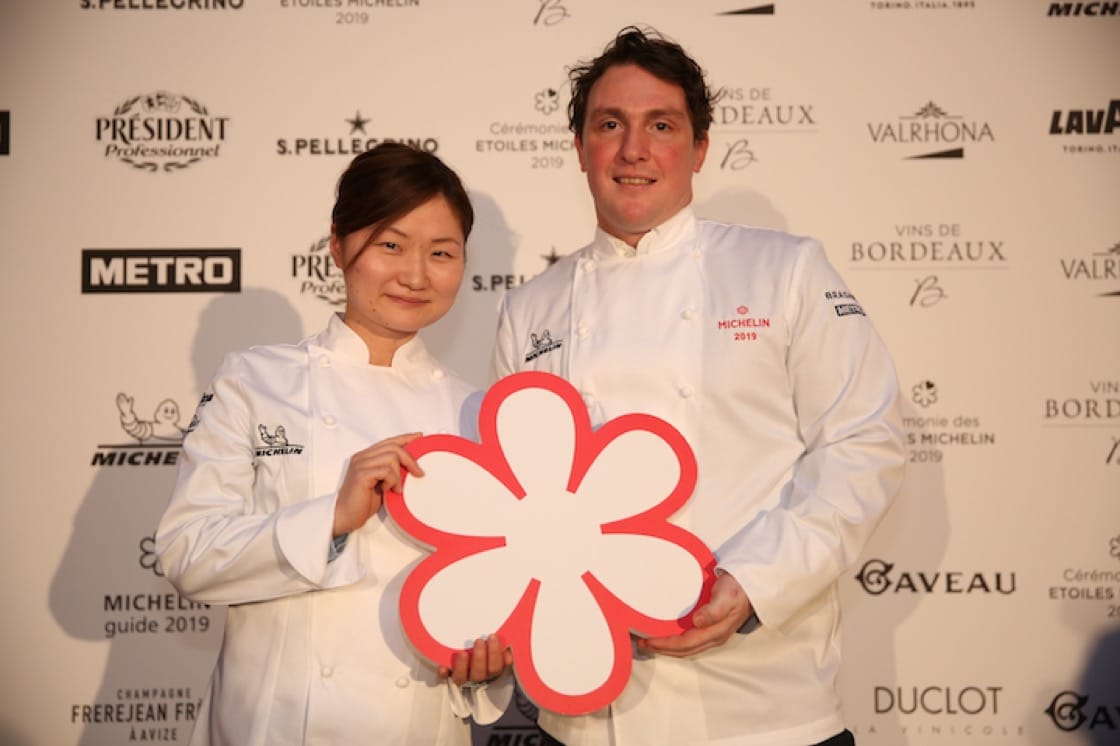 Japanese chef Chiho Kanzaki tied up with chef Marcelo Di Giacomo from Argentina to start Virtus, a trendy restaurant in Paris. Kanzaki has come a long way from when she first visited France more than 10 years ago with neither a job nor the ability to speak French. After some time, she decided to head back to Japan and spent five years earning her chops at Miraville in Tokyo. At 27, she returned to France and spent seven years at Mauro Colagreco's Mirazur.

What Our Inspectors Say: "Welcome to the headquarters of a couple (they were chefs at Mirazur, in Menton). She is of Japanese origin, he is from Argentina. Vegetables take the limelight in their pared-down, refined recipes, which feature a tantalizing marriage of flavors. The set lunch menu is wonderfully affordable."

Ayumi Sugiyama wears double hats as both the manager and pastry chef of Accents Table Bourse in Paris. A graduate of Tsuji Culinary Institute in Osaka, she worked in various restaurants such as La Truffière, where she met chef Romain Mahi. Mahi and Sugiyama would go on to start Accents Table Bourse in 2016. Her dessert creations include white chocolate and clementine cream with mont blanc and kumquat, and meringue with lychee, pomelo and yuzu.

What Our Inspectors Say: "This pleasant place, which is close to the Paris Bourse and run by a Japanese pastry chef, combines classic recipes and more cutting-edge creations. The flavors are pleasant, the preparations are precise, and the lièvre à la royale (hare) is excellent. A delicious white chocolate cream flavored with green tea is the icing on the cake of this impeccable experience. Very friendly, professional service." 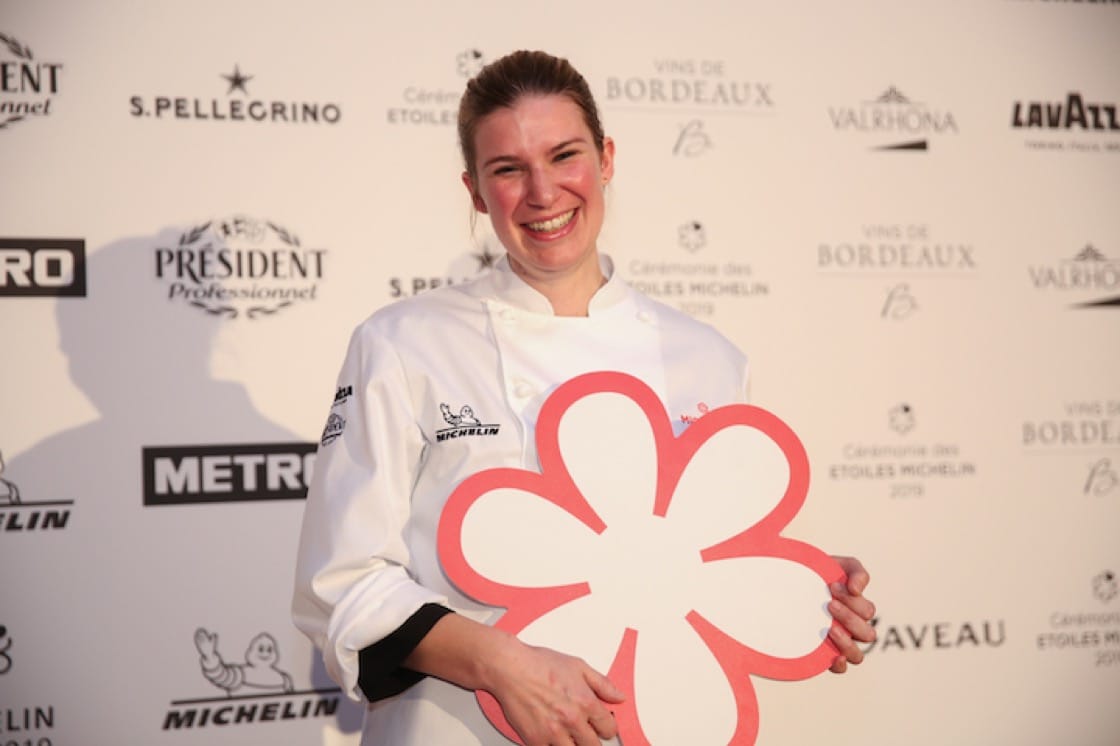 Chef Virginie Giboire fulfilled her childhood dream by returning to her hometown in Rennes to open her modern French restaurant. A graduate of the esteemed Ferrandi culinary school in Paris, Giboire has worked under the tutelage of top chefs such as Guy Martin, Thierry Marx and Alain Dutournier. Her signature dishes include monkfish with gnocchi and veal with Jerusalem artichokes, onions and sage.

What Our Inspectors Say: "Back in her hometown, chef Giboire has taken over the controls of the former Azoeñ. She proposes very elegant cuisine—made with top-notch ingredients—organized into a short menu. Served in a laid-back and intimate atmosphere conducive to sharing confidences." 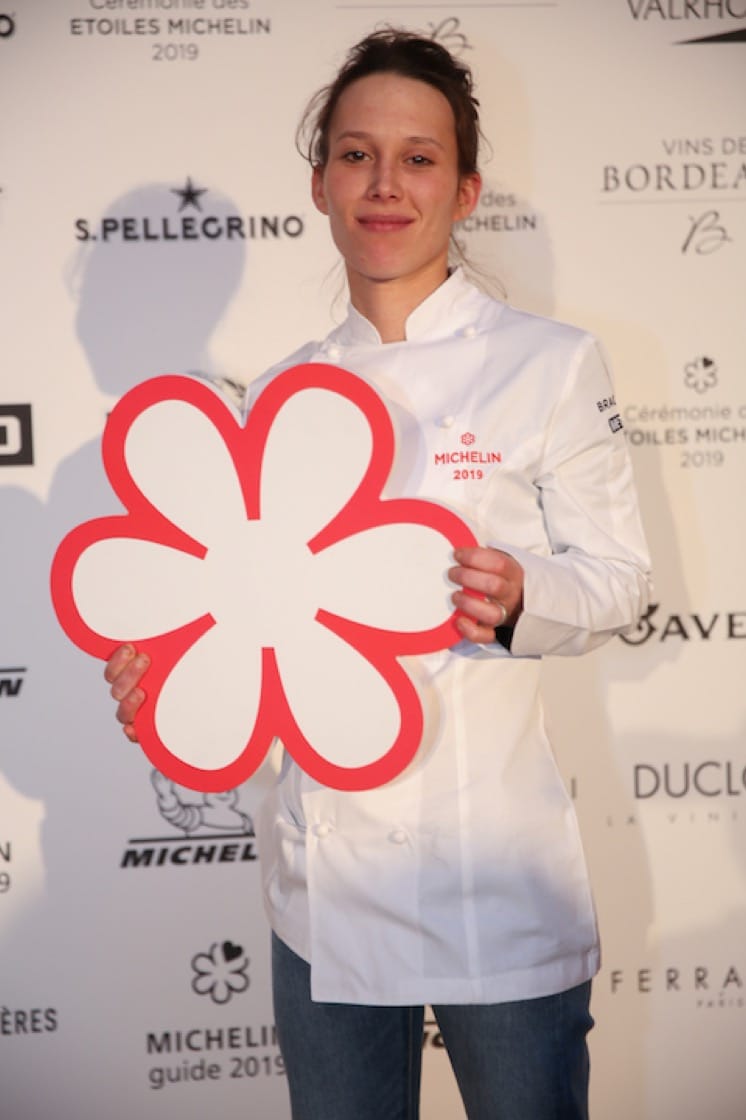 Amélie Darvas is the owner and executive chef of Äponem-Auberge du Presbytère, a modern French restaurant that plays with authentic and daring flavors and magnifies their intensity by using fresh produce from markets. As a child, Darvas accompanied her step-father, who worked for French chocolate manufacturer Valrhona, on his visits to top French restaurants, which sparked her love for gastronomy. Over the years, she has worked at Éric Frechon’s Bristol restaurant, Le Meurice, and started her first restaurant, Hai Kai. Last July, she started Äponem-Auberge du Presbytère with Gaby Benicio, who is the resident sommelier.

What Our Inspectors Say: "Lying in the Haut-Languedoc is this inn which belongs to a former 17th century presbytery that exudes an undeniable serenity. Chef Darvas wanted to 'get back to the ingredients without intermediaries.' To this end, she works with market produce and vegetables from her permaculture garden, while her Italian-Brazilian business partner, who is a trained sommelier, serves up fine wines from the region. More than a restaurant, this is a flavorsome lifelong project.'