ingredients One Product One Chef

At the one-MICHELIN-starred Sons & Daughters in San Francisco’s Nob Hill, chef and owner Teague Moriarty orchestrates masterful nine-course tasting menus inspired predominantly by seasonal offerings from local California producers. Dishes highlight ingredients like local seaweeds and heirloom carrots, but his favorite ingredient right now doesn’t sprout from the ground in the state’s fertile central valley or swim in the Pacific—it gently ages to bloomy perfection in a room in Sonoma County. It’s cheese from Bohemian Creamery, a cheese producer located just outside of Sebastopol, the once-sleepy hippy town that is fast becoming a culinary destination.

Though they have their own herd of Alpine dairy goats, Bohemian Creamery’s offerings aren’t limited to chèvre. The selection of handcrafted cheeses include those made with cow, bufala and sheep milk, as well—all made with vegetarian rennet, or enzymes used for curdling. At their small storefront, set atop a hill overlooking the Laguna de Santa Rosa, they also sell other goat’s milk products like soap, frozen yogurt and whey soda. 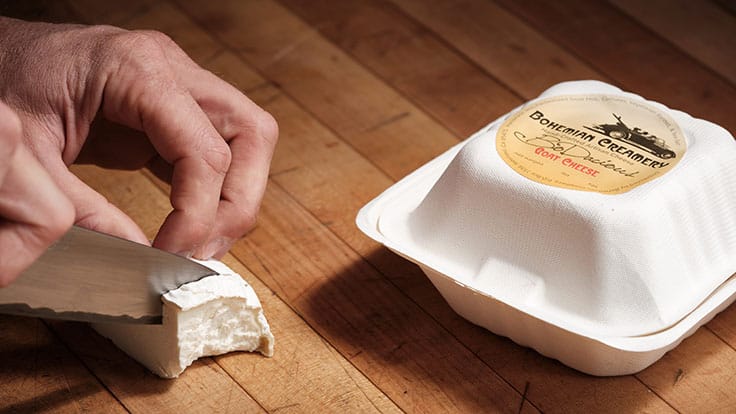 While the creamery’s products have been featured at many of California’s top restaurants, they are a new addition to the menu at Sons & Daughters. “We just started using them a few months ago,” Moriarty says. “[Owner Lisa Gottreich] just came in off the street and offered us a tasting. We were super impressed by what she does, as well as some of her cheeses.”

Right now, Moriarty includes two Bohemian Creamery cheeses on his menu: the BoDacious, a classic, tangy, soft goat’s milk cheese, and the fascinating Cowabunga. “It’s a soft-rinded cow’s milk cheese that [Gottreich] studs with goat milk cajeta, which is a caramelized goat’s milk cheese,” he explains. “We had never had a cheese like it. It has a really good and interesting mix of savory and sweet.” 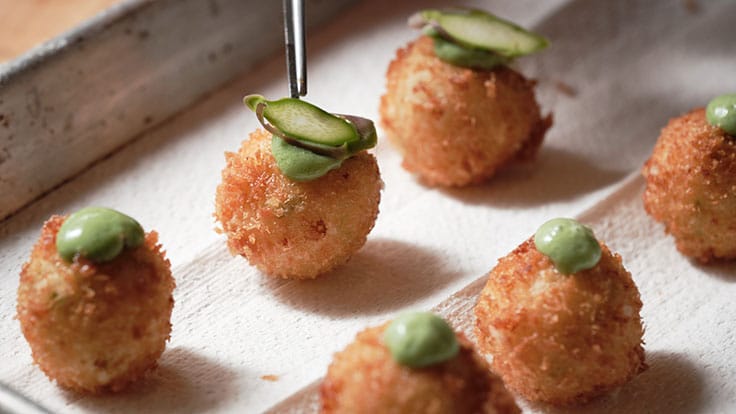 The two cheeses bookend a meal at Sons & Daughters. “The BoDacious is mixed into arancini with asparagus,” Moriarty says, describing the crispy-creamy first bite of the meal. “And the Cowabunga is made into rice pudding. We dice it up and fold it into Jasmine rice. Then we form it into small balls and fry them to finish.” That hybrid cheese course-dessert is the final nibble of the meal.

The two bites perfectly represent Moriarty’s style of cooking, showcasing nearby California products while putting his own spin on them. “We always like to find small, unique producers that take a lot of care with what they do,” he says. “And Bohemian creamery is all of those things.”