With a glossy, brilliant orange skin and equally radiant flesh, persimmons have an otherworldly quality. It's no surprise then that the fruit's genus name is Diospyros, which roughly translates to "fruit of the gods." Native to China, persimmons ultimately spread to Japan and Korea before arriving in California in the 19th century. Though there are hundreds of different Asian cultivars varying in size, color and shape, they can be divided into two categories: astringent and non-astringent.

The difference between the two is the sweetness of their flesh. A non-astringent varietal, like fuyu, can be eaten as soon as it's ripe, while an astringent varietal, such as hachiya, must be as soft as pudding before the biting bitterness disappears.

Ultimately, the varietals all generally taste the same. Heidi Krahling, chef/owner of Insalata's in San Anselmo, California, believes persimmons evoke a cross between a plum and a pear, while Tyler Rodde, executive chef/owner of Oenotri in Napa Valley describes them as a mild pumpkin-apple hybrid.

Referring to the brightly colored fruit as a "workhorse," Krahling utilizes fuyu persimmons in salads, chutneys, compotes and desserts. Sometimes she simply roasts crisp, firm slices accented with warming spices—perhaps cinnamon, ginger or cardamom—as a complement to her Thanksgiving feasts. "Don't be afraid of them because they seem so exotic," she advises chefs who haven't had the chance to work with the fruit before. "They're very approachable." 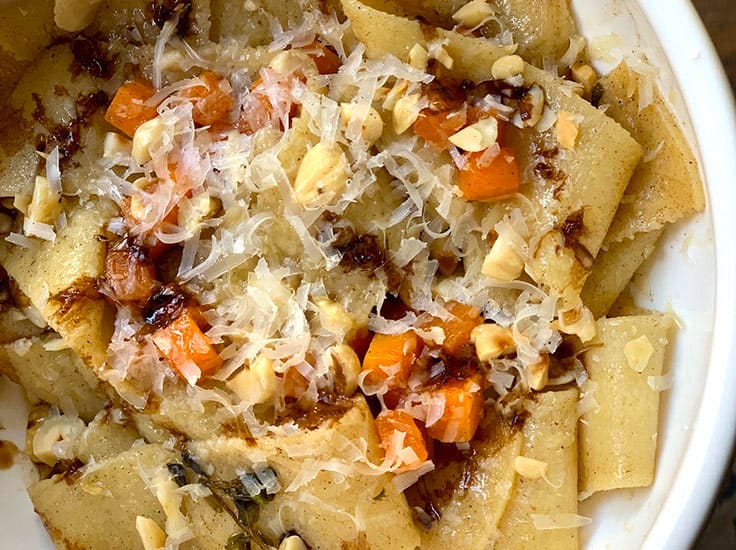 Pappardelle with persimmons, Parmesan and walnuts. (Photo courtesy of Oenotri.)

Meanwhile, Rodde utilizes fuyus in an equally menu-spanning array of dishes: in salads, on pizza with gorgonzola and tossed with pappardelle, Parmesan and walnuts to create a comforting autumnal pasta.

Fuyus are generally a very straightforward fruit to handle, since they lack seeds and can be eaten whole with the exception of the stem and leaves on top. Rodde's lone recommendation for prepping persimmons is to remove their skins first. "The skin is fine, but the fruit is much more delicate if you peel it," he says. "The skin won't break down if you roast it and it'll stick in your teeth if they're in a salad."

Since astringent hachiyas must be super soft and almost jelly-like before they're edible, they are prized by pastry chefs as a flavoring agent. At Oenotri, they're used to make a tender torta and gelato. 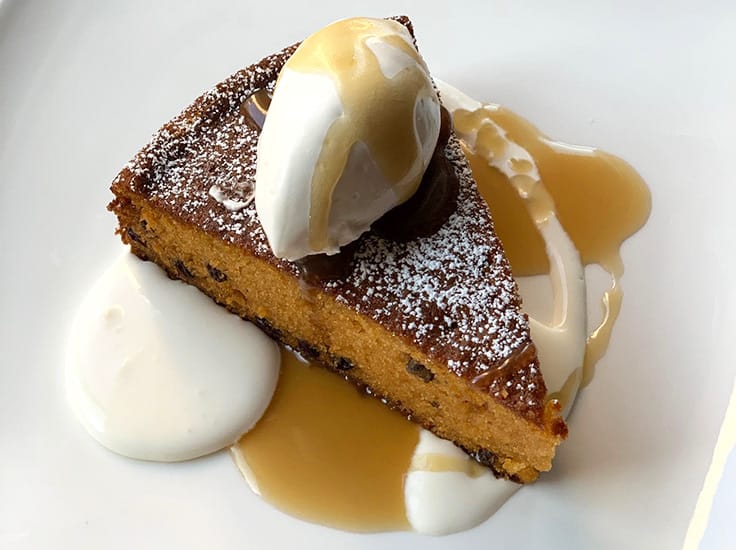 Both fuyu and hachiya, as well as other Asian cultivars, are widely available through a variety of commercial growers, many located in San Joaquin Valley, California. Though Krahling occasionally buys them from local producers, she gets most of them from guests and neighbors who bring them to the restaurant in hopes of offloading their excess harvest. "It's our very own community garden," she jokes.

In the Golden State, persimmon season starts in October, peaks during November and December, and can continue into February. Krahling loves seeing them start to show up at farmers' markets. "I don't want to get all weepy, weird," she says, "but they mark the start of a new season with [a] whole new flavor profile."

Aside from the popular Asian cultivars, there are American persimmons (Diospyros virginiana), which are commercially produced and grow wild along the Eastern seaboard and as far west as Texas and Oklahoma. In New England and the Mid-Atlantic, the growing season is much shorter, usually only extending from October into December. This varietal is highly astringent, so the fruit must be handled carefully. The fruit is most often dried to be eaten as is or in salads, or it's used fresh by bakers, who work them into pies, cookies and cakes. You can drink it too! Persimmons are the foundation for a bittersweet, aperitivo-style liqueur by Apologue.