Joshua Skenes is a busy man. The chef most recently handed over the reins of two-MICHELIN-starred Saison in San Francisco to Laurent Gras to gear up for his Skenes Ranch project in Washington State later this year. Shortly after his decampment, his Angler restaurant, which debuted in the City by the Bay last September, was awarded its first MICHELIN star in the MICHELIN Guide California 2019 selection.

View the MICHELIN Guide California 2019 Selection
Tonight, dinner service begins at Angler Los Angeles. Located in the heart of Beverly Grove at the Beverly Center, the 110-seat eatery includes a large fish tank, both semi- and private dining rooms, a 10-seat bar, walls outfitted with loads of taxidermy (like its Bay Area sibling) and, at the very center of it all, a massive wood-burning hearth ready and waiting for food to be cooked over embers. 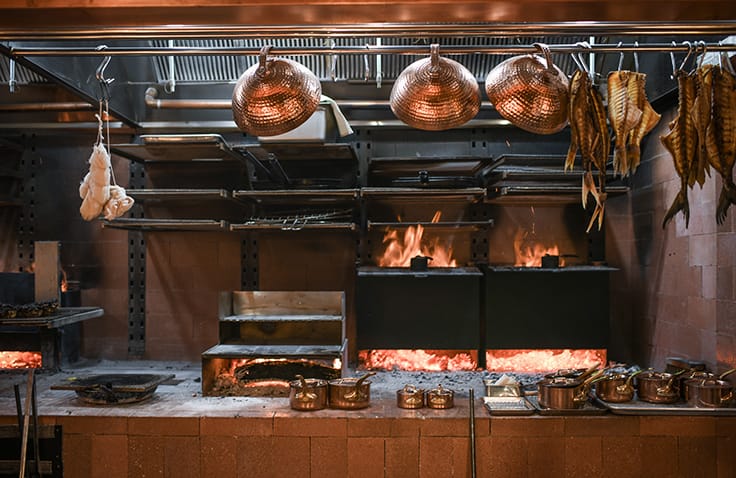 Though the menu at Angler Los Angeles is seafood-driven, Skenes plans to incorporate ingredients local to SoCal. Per the restaurant’s website, “Each day’s inspiration is drawn from the products themselves and is an articulation of their natural flavors, served at their peak taste.” Executive chef Dameon Evers leads the charge here, offering sample menu items like Pacific ruby fish with salted plum, and sea bream and plantain ceviche at the raw bar; bull’s blood beet with embered tomato and walnut; summer squash cured in kelp and vadouvan; salt-and-pepper-scorpion fish; and whole smoked trout. (A whole-pastured chicken, 88-day dry-aged rib eye and antelope tartare are also available for the more carnivorous.)

The beverage program by wine director Peter Carrillo features a wine list with a heavy emphasis on Burgundies and wines from Napa and Sonoma. Thoughtfully-curated spirits—some of which date back several decades—gives a hat tip to that all-encompassing hearth.