Earlier this month, Union Square Hospitality Group restaurateur Danny Meyer opened a spectacular outdoor taqueria on the Williamsburg waterfront in Domino Park. Barbara Garcia Madero, the former sous chef at Meyer’s Union Square Café and two-Michelin-starred MoMa restaurant, The Modern, now manages the restaurant and is responsible for dishing out its menu of $5 tacos with offerings like pork and mango, beef and salsa negra and shrimp and chayote tartare.

Raised in Aguascalientes, Mexico, Madero has worked for Meyer since 2012 when she took an externship at Union Square Café. Below, she and Tacocina’s team of chefs share their recipe for the popular mushroom and elote sauce tacos. Prepare it alongside a bright summer beverage like Ophelia’s violet cocktail to taste some of New York’s latest openings without leaving home. 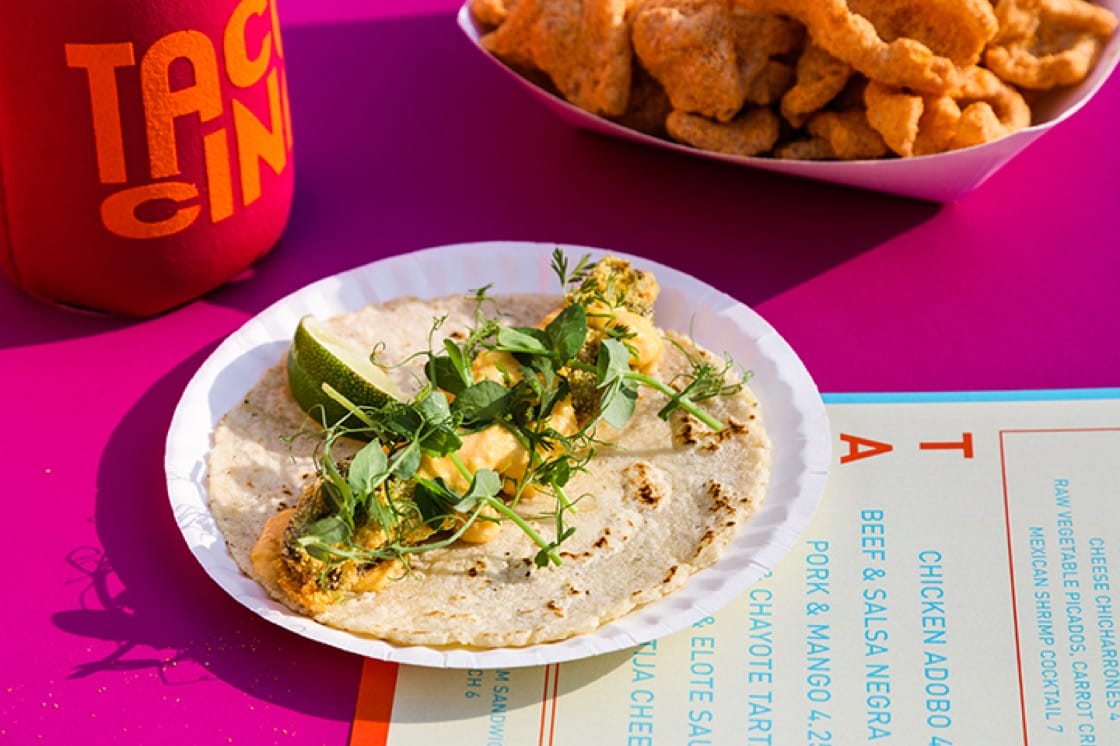 1. Make the elote sauce: Heat the oil in a medium-sized saucepan over low heat; add the corn, shallot, garlic and bay leaf and cook, stirring regularly, until the vegetables have soften and the shallots are translucent, 8 to 10 minutes. Remove from the heat and let cool. Discard the bay leaf and transfer the remaining ingredients to a food processor along with the lime juice, hot sauce, cotija cheese, sour cream and 1 teaspoon salt. Purée, taste and adjust seasoning with more salt as needed. Reserve in a small bowl.

2. Prepare the mushrooms: Fill a small pot halfway with oil, place over medium heat, and heat to 350˚F. While the oil is warming, combine the cornmeal and flour in a wide shallow bowl or plate. Pour the buttermilk into another dish of the same kind. When the oil is ready, dredge the mushroom slices in the cornmeal-flour mixture, dip in the buttermilk, and then dredge again in cornmeal-flour mixture, shaking off any excess. Gently lower the coated mushrooms into the oil with tongs or a slotted spoon. Fry, gently stirring, until golden brown, about 2 minutes, and then transfer to a plate layered with paper towels to drain; sprinkle liberally with salt.

3. Heat the tortillas: Warm the tortillas in a large dry skillet over medium-low heat 10 minutes before serving; wrap in a dish towel to keep warm.

4. Assemble the tacos: When ready to eat, plate the tortillas and divide the fried mushroom slices among them. Spoon some of the elote sauce over each taco and garnish with the cilantro and pea tendrils. Serve with lime wedges on the side.