Maison Premiere's chef Jacob Clark shows us how to make his version of the classic appetizer.

Oysters Rockefeller made their debut into the country's culinary lexicon at Antoine's Restaurant in New Orleans in the late 1800s. Here, Jacob Clark, executive chef of Maison Premiere in New York, shares a recipe for his version of the classic dish. "A dish so rich that they named it after Johnny Rockefeller himself," says Clark, it traditionally features oysters on the half shell topped with butter, greens, herbs and breadcrumbs before getting baked or broiled. 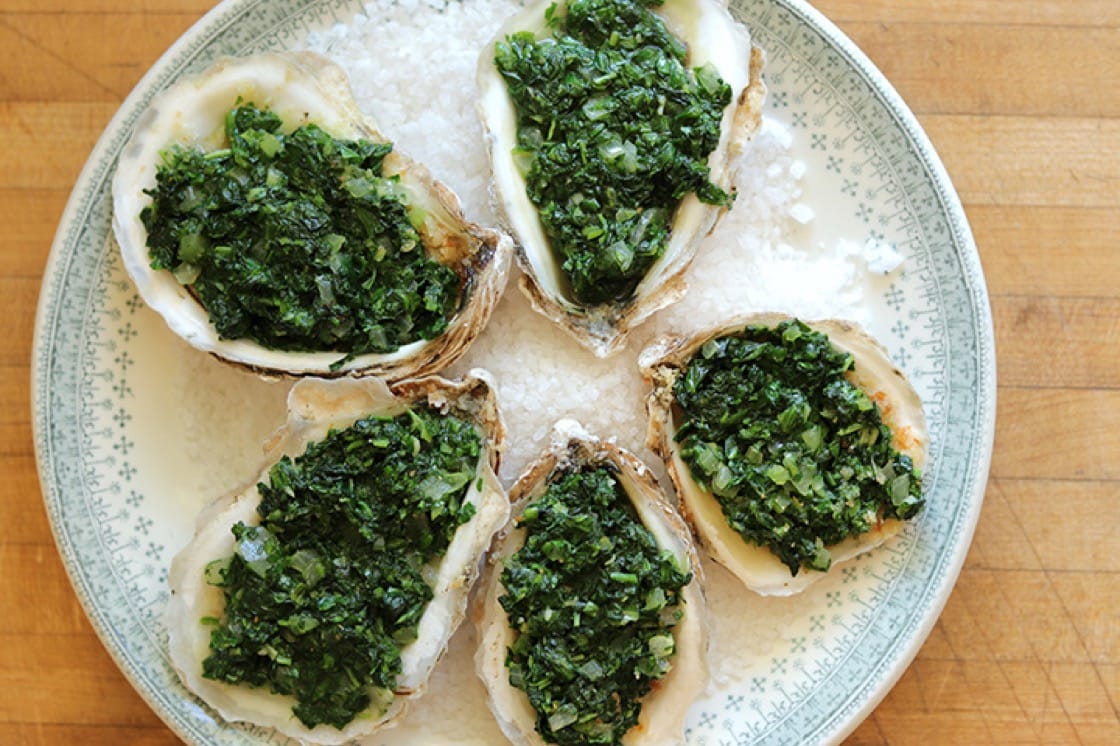 Clark's version includes watercress, spinach, scallions and parsley for a vibrant green color, along with a splash of Herbsaint. Herbsaint is native to New Orleans and is a variation of absinthe—sans the wormwood—that tastes of licorice. Clark notes that a lot of people like to flambé the alcohol after added to the butter mixture, but he does not to keep more of the anise flavor in the finished dish.

Watch the video below to see how Clark prepares this dish, along with his tips for how to open oysters.

2. Blanch the spinach: Bring large pot of water to a boil. Add spinach and push down to submerge in water. Blanch until stems are no longer rigid, about 45 seconds; drain spinach and place in a bowl of cold water. In a towel, wring out the water from the spinach. Finely chop and set aside in a dry bowl. (You should have about 1 pint.)

3. Make the butter mixture: Melt the butter in a large skillet over medium heat. Add the onion, celery, garlic and salt, and sweat the vegetables until the onions are translucent, about 2 minutes. Add the cayenne, fennel seeds and dried basil leaves and stir. Add the watercress, scallions, parsley and blanched spinach and cook for about 1 minute. Add the Herbsaint and "sexy" spice blend and stir.

4. Assemble the oysters: Place the oysters on a baking sheet(s) lined with coarse salt. In each oyster, add enough breadcrumbs to cover the oyster followed by a spoonful of the butter mixture. Bake until firm to the touch, about 5 minutes. Serve immediately.

Method: Combine all of the ingredients and store in an airtight container. (Yield: About 1 ½ cups.)