After several cold months of being tucked away—whether in the comfort of a (small) apartment or a (sometimes windowless) bar—many of the city’s greatest watering holes are swinging open their patio doors and rooftops for the spring and summer months.

These off-duty afternoons should restore your sense of inspiration and clarity and require a beautiful view to rest the eyes, attentive service, great drinks, a tempting food menu and, if you’re lucky, plenty of space.

Here, we’ve rounded up some options offering just that, with some good people watching to make it worth your dollar. It was a long winter—the time for day drinking is now. 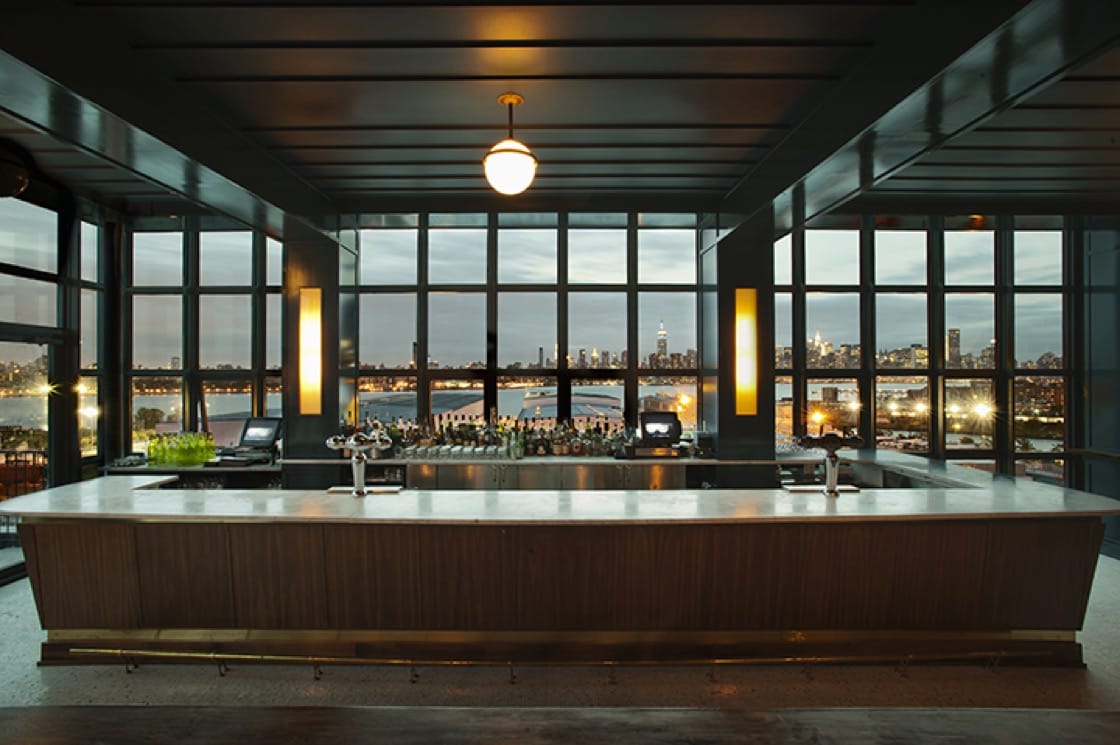 The view from The Ides at Williamsburg's Wythe Hotel. (Photo by Matthew Williams.)

Situated on the 6th floor of the retro-industrial Wythe Hotel, The Ides offers views of New York from the East River. The bar features an extensive beer selection, playful snacks like salted caramel popcorn ($6), chips and trout roe ($15) and lobster sandwiches ($18 each). Beloved Brooklyn restaurateur Andrew Tarlow (of Achilles Heel, Diner, and Romans, among others) runs the hotel’s food and beverage program, which means an elegant courtyard dinner at Reynard could easily follow time spent at The Ides.

Cocktails from ZZ’s Clam Bar alum and tiki renaissance maestro Brian Miller (who you can find daily at the new bar wearing a sarong) are pretty far out. One is served in a fish bowl; another, The Exotica, in a huge clamshell smoking at the sides with dry ice. This rooftop bar atop the Pod Hotel 42 opened in late May with some serious offerings: a huge rum collection, sweeping views of Midtown and luxe details like a 30-foot lava rock bar. 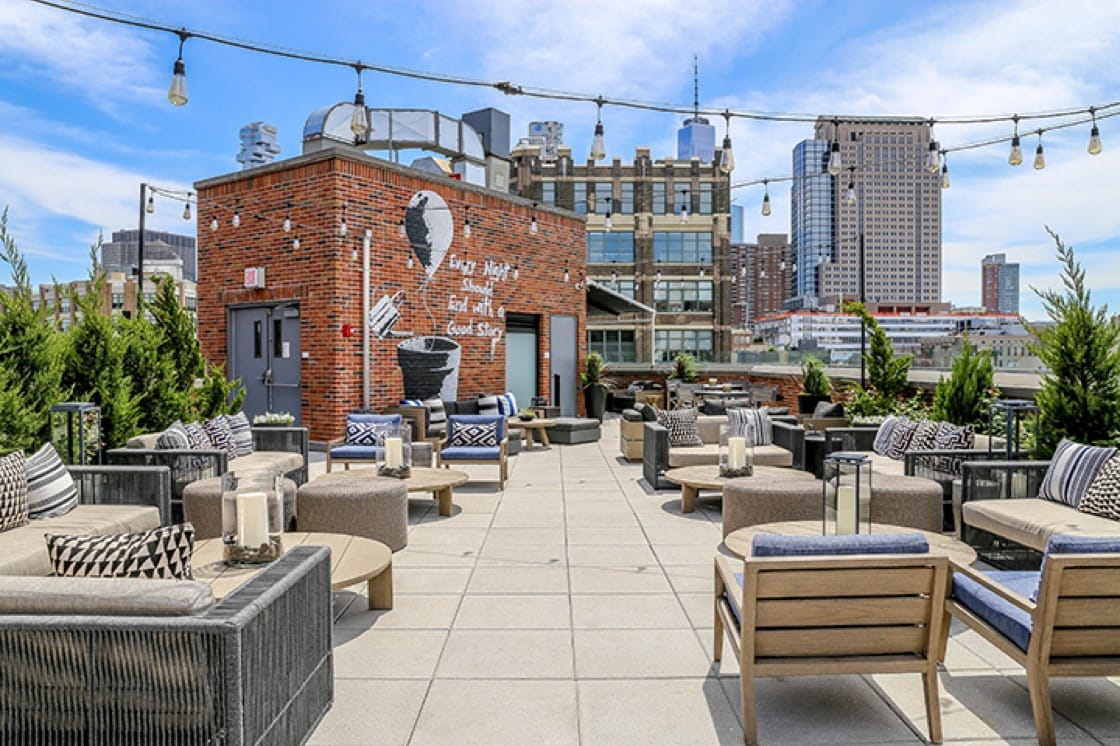 The new rooftop digs atop the Arlo SoHo. (Photo courtesy of Arlo Hotels.)

Just in time for summer, the Arlo SoHo hotel debuts their new rooftop bar boasting panoramic views of the Hudson. A new concept for the property, guests can expect fare from the hotel's Harold's Meat + Three and cocktails by Milos Zica (Employees Only). For those looking to glamp, the hotel has launched Camp Arlo in the courtyard, featuring two large tents for summer fun, as well as giant Jenga and corn hole. Food and drink is also on offer at Camp Arlo; look for daily hot dog specials named after a different national park, like the aptly-named Yellow Stone dog topped with sauerkraut and spicy mustard.

During the summer months, the popular second floor bar at the Sixty LES Hotel transforms into a bonafide kanpai garden, flush with greenery, bamboo and Buddhas. The 1,650-square-feet of communal tables welcome guests with frozen Kirin Ichiban, boozy popsicles in flavors like mint julep and bourbon-choco-banana, and a menu of tacos, handrolls and other Japanese street food-inspired small bites. The beer list features cult favorites like the Hitachino White Ale from Japan, the Sorachi Ace from Brooklyn Brewery and Evil Twin’s “Hipster” pale ale. And no summer outing is complete without frosé—they’ve got that here, too.

RELATED READ: Where to Go After Hours with The Bromberg Brothers 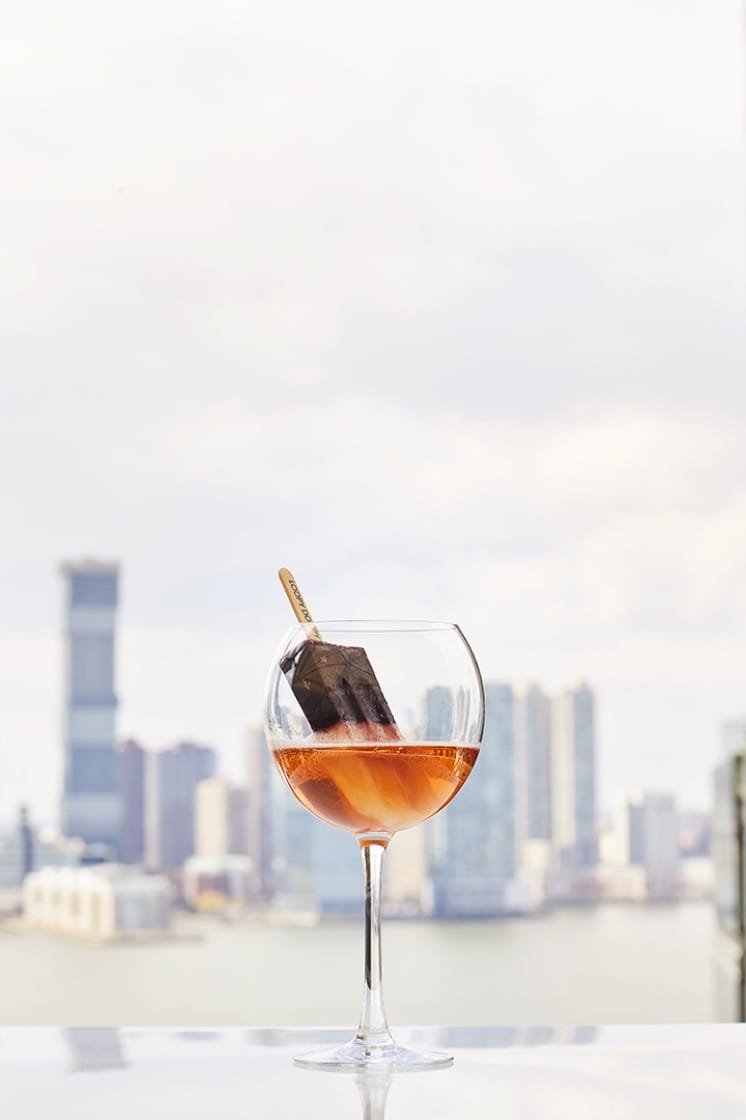 Order a popsicle served in a glass of Prosecco and enjoy views of the Statue of Liberty and New York Harbor at this Battery Park City destination. Located on the 16th story of the Conrad New York, this seasonal venue hosts those who come for the aforementioned signature cocktail, airily-clad businessmen and women as well as lounging hotel guests. For a quieter time, go mid-day.

Brought to you by the team behind Williamsburg’s Berry Park, this low-key bar and rooftop is a mainstay for folks who like Aussie-inspired eats; dishes by chef Gabriela Ponce include grilled lamb "lollies" with rosemary and honey-mint yogurt; meat pies topped with mashed potatoes; and a ploughman’s plate to satiate your charcuterie platter needs. Looking to get there earlier in the day? Grab a group of friends and head for brunch beginning at 11:00 a.m. 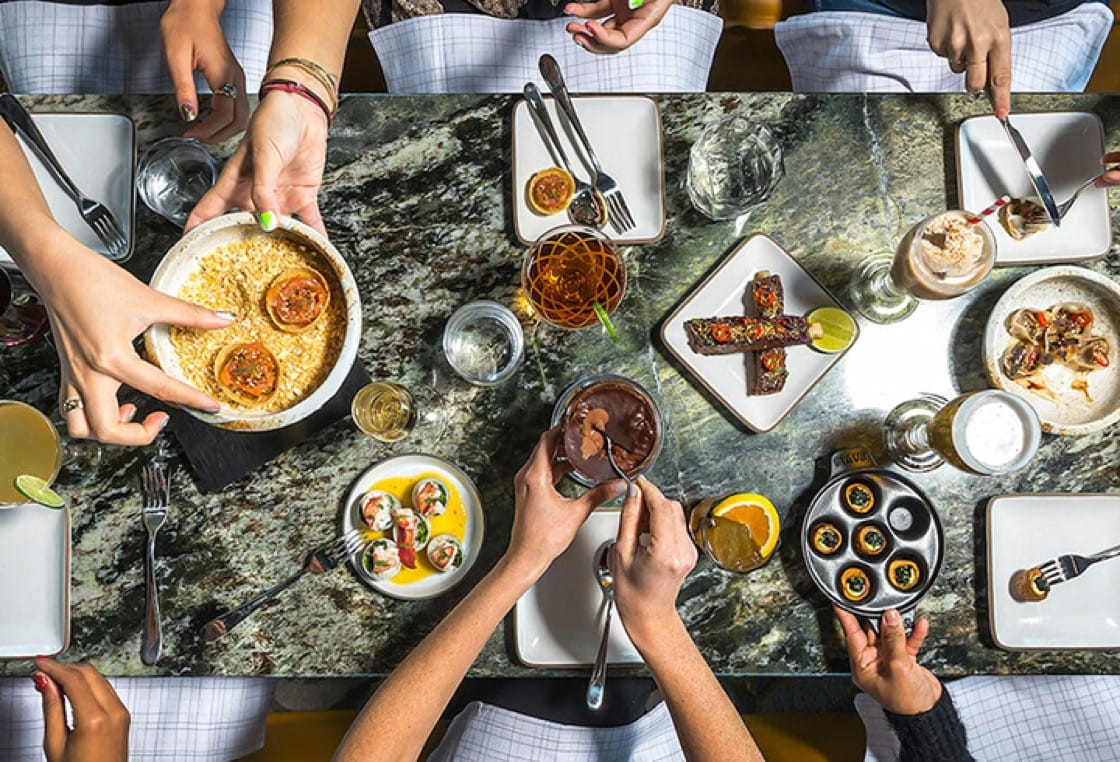 A glorious spread of eats at Westlight. (Photo courtesy of the William Vale.)

Here, glass walls put you on the same level as the skyscrapers across the water. The 22nd-floor rooftop bar at The William Vale features 360-degree views of New York, a sophisticated list of craft cocktails, and bar snacks inspired by global street fare (think duck carnitas tacos and seared octopus skewers) from Andrew Carmellini. Stunning views and some serious eating make this place well worth the day trip.

For those who like their libations with a side of art, head to the roof bar at the Metropolitan Museum of Art and check out the latest exhibition while taking in views of Central Park and the surrounding neighborhoods. (Also be on the lookout for one of the members of the growing red-tailed hawk population, easily spotted from the rooftop.) Cocktails, wine and beer are all available to order, as well as a variety of snacks, sandwiches and salads. 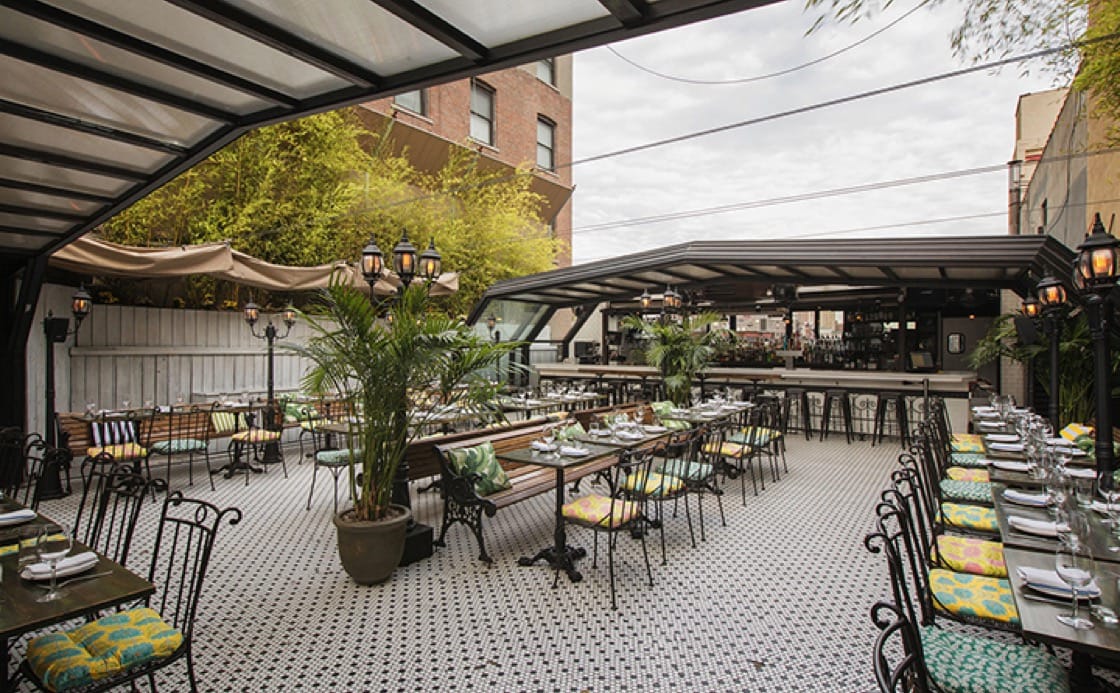 A retractable rooftop, underground dance den and playful French fare from Goldman-trader-turned-chef Seth Levine keep this venue popular rain or shine. On the weekends, brunch begins at 11:00 a.m. Day drinks include Bellinis, Bloody Marys, sangria bowls and mimosas, and cocktails for under $10. (If you’re in the right company, Jameson and Blue Nectar tequila shots are also on deck.)

This 15th floor bar of the Hotel Indigo Lower East Side lets you sip a cocktail on a weekday with your feet up by the pool and a flatbread on the way, all without leaving the Manhattan. The bar’s namesake drink mixes tequila, cranberry liqueur, allspice dram, apple and lemon for your weekday lounge-athon needs. The menu is basic comfort food—guacamole with blue corn tortilla chips, an aged Gruyère and smoked mozzarella grilled cheese, and a double patty cheeseburger are all up for grabs.