The First Day I Got My Michelin Star: Maxime Gilbert Of Écriture in Hong Kong

Hong Kong French cuisine First Day I Got My Stars

It was 11am on December 12, 2018, the day after the announcement that Écriture was recognised with two stars by the MICHELIN Guide Hong Kong Macau 2019. Chef Maxime Gilbert was already up, back to the kitchen in full force.

“After receiving the award, I went back immediately to the restaurant to celebrate with my team,” he said.

He showed me a video in which he popped open a bottle of champagne, as the alcohol splashed onto the head of his pastry chef. 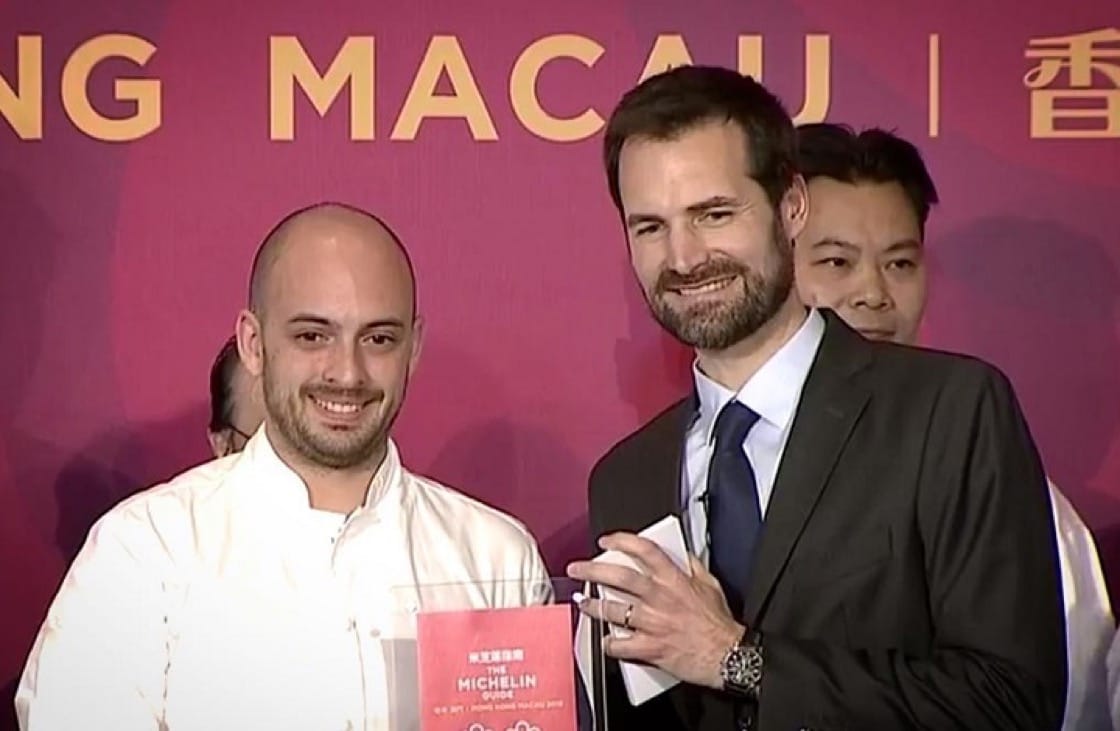 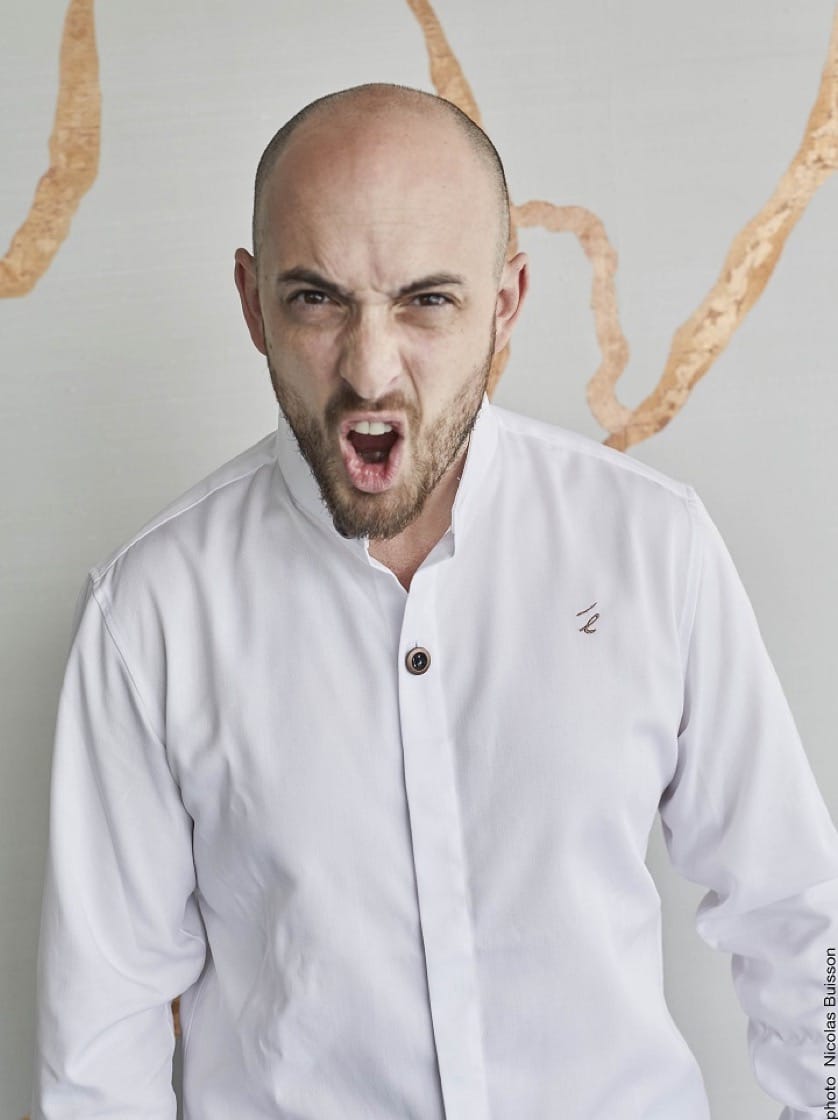 Many chefs would do whatever it takes to just earn one-star status. Taking two stars in the first year of the restaurant’s opening is something Gilbert had never thought of.

“Have I thought about it? I’d say yes and no. Yes, because I have a certain expectation about the restaurant. No, because I didn’t dare to think. After all, we’ve been open for eight months only,” he laughed, adding that on the day of the ceremony, he still had not received the call from the MICHELIN Guide at 10:30am.

“As I got the call, I immediately cried. The MICHELIN Guide is so important to a chef. It’s an immense mark of recognition.” 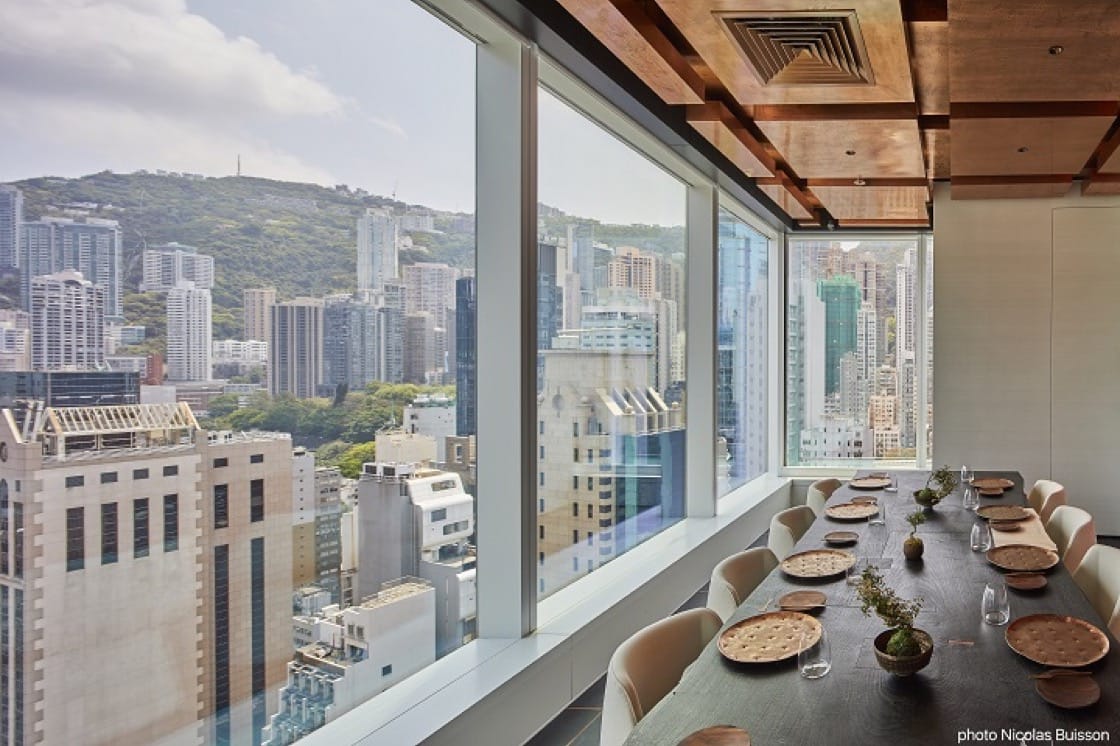 The cityscape outside the window lifts the diners’ mood up for a good meal ahead.（Photo：Écriture）
An Inspiring Mentor

The Gilbert family, who hail from France, is filled with painters, musicians and photographers. Besides Gilbert, there is not a single person working in the restaurant industry, but they are all passionate food lovers.

“I’ve loved cooking and eating ever since I was young. Back then, my father came to Asia very often. I almost moved to Hong Kong. He was in the cognac business and had contacts with chefs very frequently. He would tell me their stories when he got back home. I was yet to know what the MICHELIN Guide was at that time. I only knew I wanted to become a chef,” Gilbert said.

“I quickly realised fine dining was what I wanted to pursue,” he said, and so he bought the French edition of the MICHELIN Guide and sent out job application letters to the restaurants in the guide book. As he met the chefs from the two- and three-star restaurants, he understood getting in was not an easy feat. Then, he crossed paths with chef Yannick Alléno.

“He has a mesmerising power to make you believe in him. He told me, ‘I just took over a one-star restaurant at a hotel. My goal is to make it a three-star restaurant.’ He gave me a job at the Alléno in Paris (Alléno Paris au Pavillon Ledoyen). I became sous chef after three years. And two years after that, we got three stars.” The MICHELIN Guide gave Gilbert his first job in fine dining, as well as introduced him to a mentor who led him through the first part of his culinary expedition.

“He came to support me the first day Écriture was opened. When I got the star, I called him right away,” said Gilbert, controlling himself from tearing up. “I am really grateful to him.” He learnt all about how to be a chef from Alléno. After that, he came to understand running a restaurant as a business at Amber, where he had worked as the head chef. The experience made him realise he should not take everything for granted. “I’d never been a businessman. I was not good at calculating. But during the four years at Amber, I learnt how to manage a restaurant, which helped me to become a general manager of Écriture,” he said. “You can’t be a princess at a restaurant. If you want A, B or C, you need to first bring in capital.” 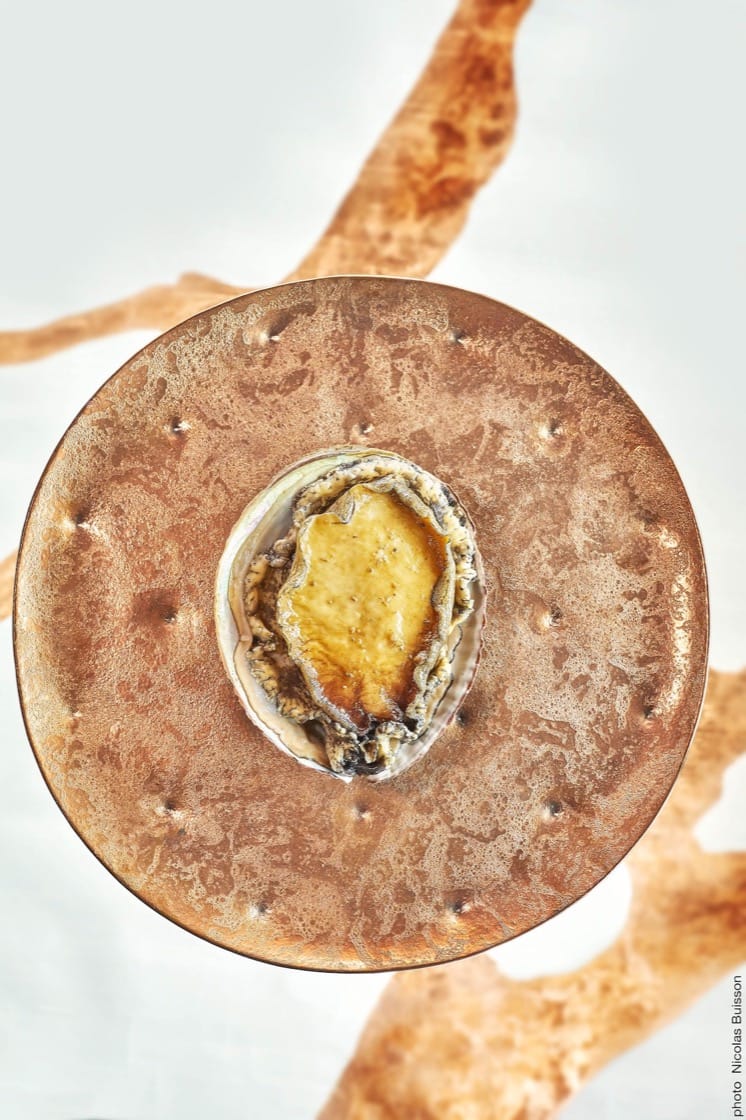 Gilbert had previously worked in Beijing. The range of ingredients available there was rather limited. Hong Kong is an eye-opener to him. In particularly, he discovered the quality of Japanese food ingredients, which are used at Écriture. He favours especially the produce from Fukuoka, not only for its variety and quality, but also the easygoing suppliers. On the existing menu, one would find strawberries and mushrooms from Fukuoka.

“Although we use Japanese ingredients, I hate to be called a fusion restaurant. We are a French restaurant,” he emphasised. The cooking philosophy of Gilbert is very simple. Respect for the ingredients reigns supreme in his kitchen, as he tries to find the best from

every stalk of vegetable or piece of meat. “It’s not easy, because it takes a lot of experimentation to find out the right method and temperature to cook every single ingredient and, in turn, the balance of flavour. I hope that a dish could come out like a person, beautiful and charismatic.”

He used fish as an example. A minimal dressing of lemon is sufficient to accentuate all its characters. Any broth, sauce or ornament is redundant. Much like the artwork displayed in Écriture by South Korean artist Park Seo-bo, what appears as a field of red from afar actually has so many nuances, only privy to a viewer if he comes close enough. “It might sound very simple. But to have the power to surprise the diners, you’d need a lot of training.”

One of the dishes he is the most proud of is abalone with abalone liver sauce, wasabi, grapefruit, eggplant clear broth and beef ham. It hits all the flavour notes and highlights the depths of the abalone. Another favourite of the chef is caviar.

“I originally thought only serving caviar was a bit pretentious. And then I decided to put it inside beef ham to let it absorb the beef’s umami and return to room temperature, so its taste would get more complex.” Speaking of his way of cooking, Gilbert turned pensive: “Cooking is sharing. It’s something made with heart. You need to prepare every dish like you’re making it for your loved ones.” 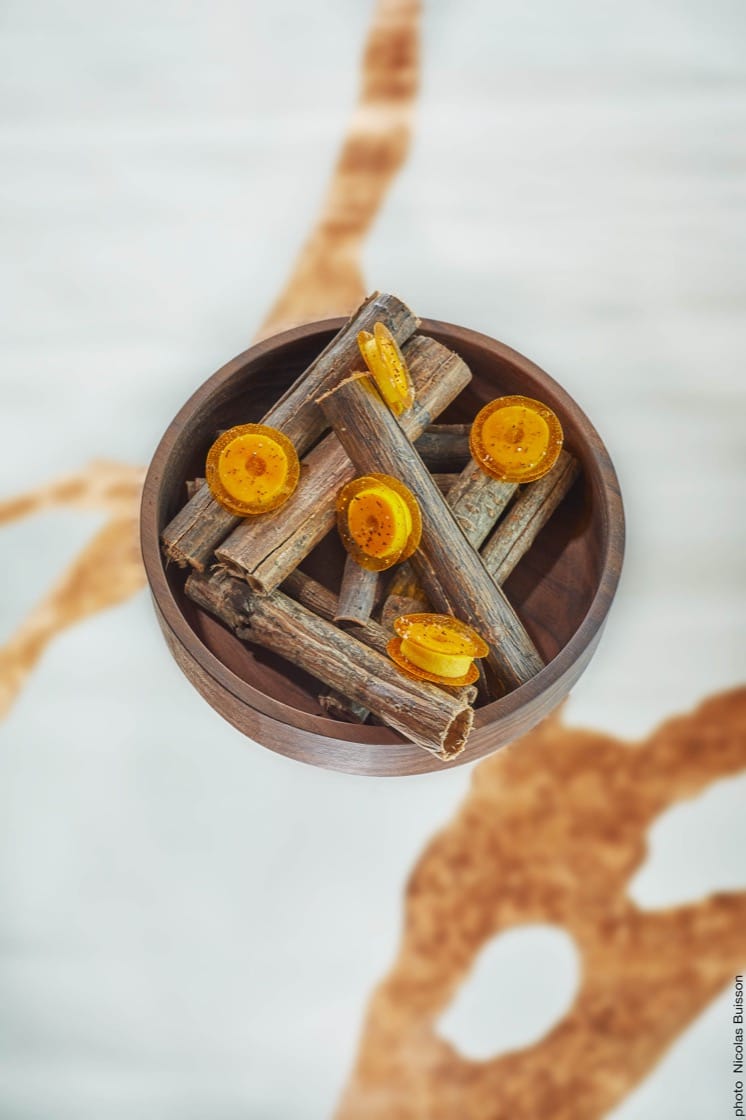 When was your first encounter with the MICHELIN Guide?

When I was interning at Gregory Coutanceau’s two-star restaurant, Coutanceau in La Rochelle in France, I started to understand what the MICHELIN Guide was and became determined to establish myself in fine dining.

What was running through your mind when you first heard Écriture won the star?

I took a deep breath immediately. I had thought that we might not get the award this year, even though this had been the hope of our team and our customers since opening.

When we got the news, we bought a bottle of cheap champagne at the pier as we were going to Macau for the award ceremony. The celebration was already on at that time. 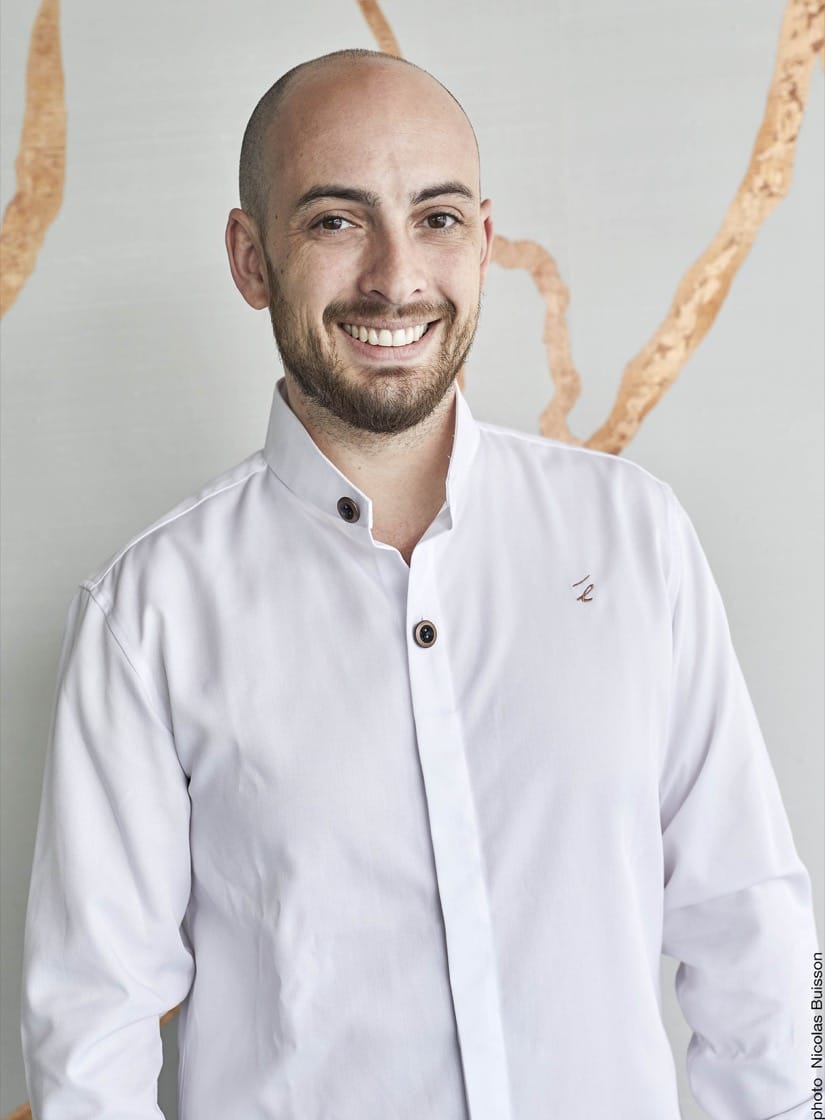 It gave me my first job in fine dining and let me meet many chefs who influence my life greatly.

Resilience. Only after you stay at a restaurant for a long time would you understand how a kitchen works and gain the trust from the others to give you more learning opportunities. Don’t work at a starred restaurant for six months and jump to another. Working at 25 starred restaurants for three months each doesn’t make you a star chef.

Besides, the team is very crucial. Nowadays, the chef is often the star of the restaurant. But division of labour and the effort of the team are in fact the most significant elements. I respect and trust the front of the house. We’re equals. There’s a rule at Écriture. Whoever calls me chef would be fined HKD$100. I want them to call me Maxime. And there’s no name on my jacket.

All photos are courtesy of Écriture.

This article was written by Gloria Chung and translated by Vincent Leung. Click here to read the original version of this story.