To the unsuspecting visitor, Sheung Hei Claypot Rice may not look anything out of the ordinary.

Located in an inconspicuous corner of Hong Kong island's Sai Wan district, the minimally decorated eatery blends well into the old world charm of the neighbourhood. Beyond its humble façade, however, the place, which has a Bib Gourmand recognition, is immensely popular among nearby residents and has served as a teeming hotspot for local foodies in the decade since its establishment.

Besides the eponymous claypot rice, which the eatery built its reputation on, Sheung Hei also offers other home-style Chinese dishes, such as Peking Ribs, Assorted Vegetable Casserole With Vermicelli and Pan-Fried Prawns With Soy Sauce. 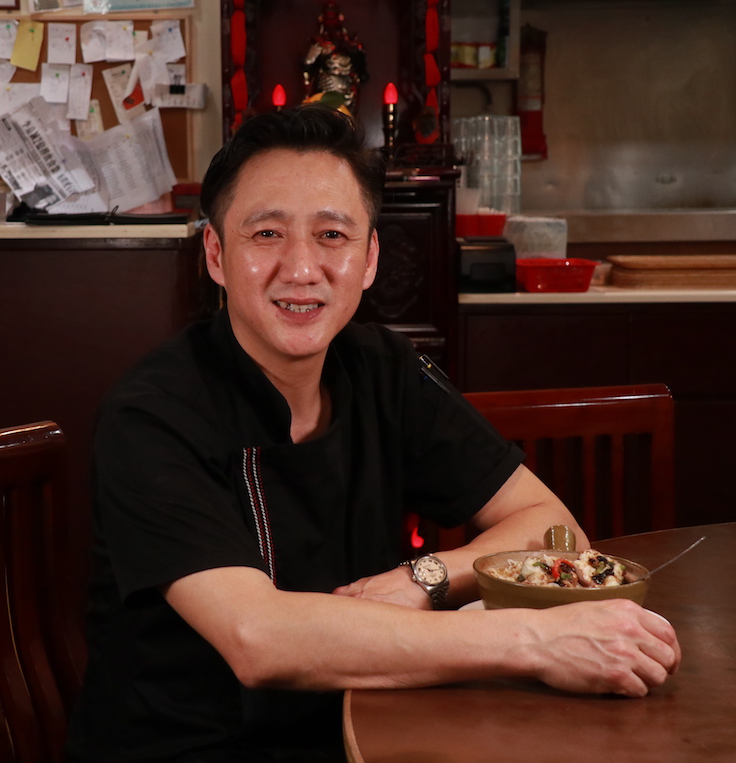 Chef-owner Lam Weng Hong (pictured left) has been a resident in Sai Wan for as long as he can recall. He was initially expected to inherit the dried seafood business his family has been running in the area for the past few decades, but his deep passion for food and cooking steered him towards the business of restaurants. Lam got his head-start in Luk Yu Tea House, a Michelin Plate restaurant and eventually made the decision to hand the family business over to his brother and brother-in-law so that he could take a leap of faith to open his own restaurant.

“Back in the day, I lived above Kwan Kee Claypot Rice and visited the place frequently,” said Lam of the well-known restaurant, not too far from his own shop, which has also earned a Bib Gourmand recognition. “With every visit, the desire to open my own restaurant grew. Plus, I was really confident in cooking dishes that I thought tasted just as good. That really pushed me to start my own business,” Lam added.

A series of obstacles

Recalling the early days of the business when he was new to the F&B industry, Lam said that his experience running his family business did not come in handy at all and he swiftly faced a series of obstacles. “We were still interviewing potential staff the night before our opening. And on opening day, we only had around four to five people running a 3,000-square-feet restaurant,” he reminisced. “Everything was just all over the place. We didn’t even have time to eat,” Lam said with a laugh.

Although Lam was inspired by his many visits to Kwan Kee to run his own place in a similar fashion, but the divergent personalities of the proprietors are clearly reflected in their menus, which have dishes tellingly stamped with their distinct styles and individuality. 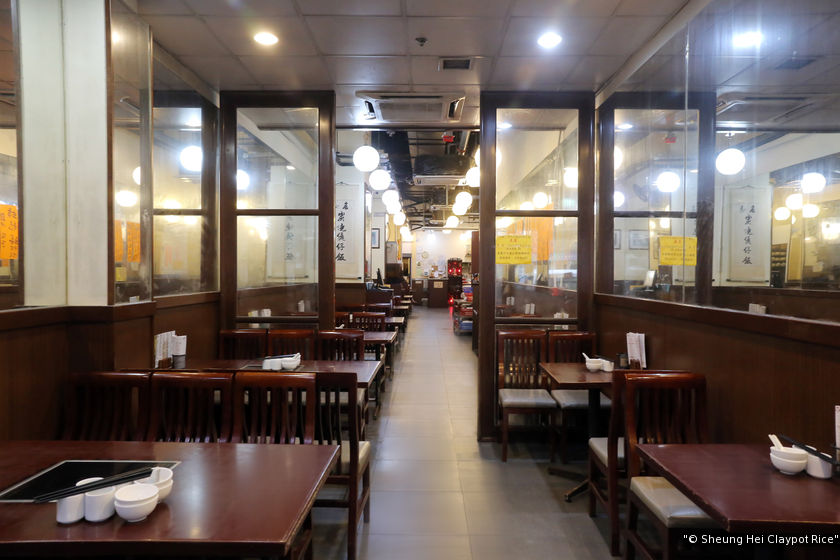 Not content with conforming to tradition, Lam regularly introduces new ingredients and flavour combinations, and constantly tries to add a creative twist to his dishes.

There are more than 30 different types of claypot rice on Sheung Hei's menu, including classics such as Chinese Sausage Claypot Rice, Steamed Eel Claypot Rice and Beef Claypot Rice With Egg, as well as the less-common Rice With Dried Shrimp And Meat Patty and Rice With Preserved Fish And Meat Patty. Both the dried shrimp and preserved fish are local produce; the former is sourced from Tai O, a sleepy fishing village on Lantau island, while the latter being made in Hong Kong using the indigenous fourfinger threadfin fish. Thanks to his family connections in the dried seafood business, Lam is able to guarantee the quality of the ingredients that he uses. 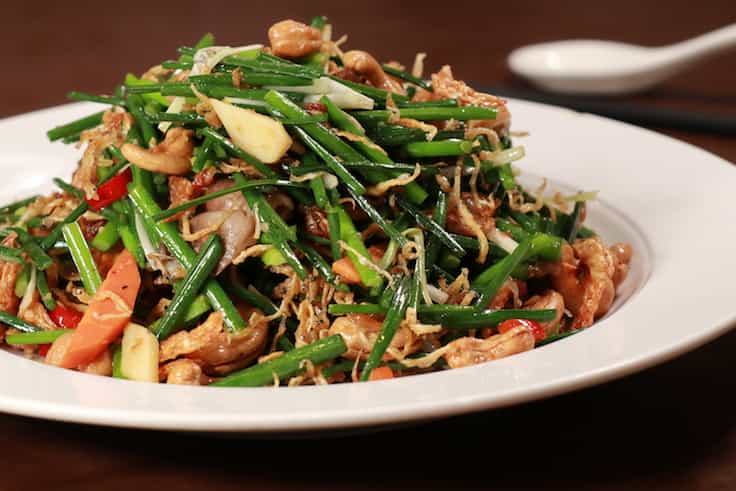 Claypot rice is traditionally prepared using either a charcoal or gas stove, but Lam uses a lava rock grill in place of a stove and a claypot laced with ceramic instead of traditional ones made fully with clay.

He explained: “The heat from the lava rock grill is more even, which allows a thick layer of rice crust to form without the risk of overcooking the ingredients. The ceramic-laced claypot was chosen for its heat-retention properties. Claypot rice can only be enjoyed best when it’s hot.”

Ultimately, the key to a good pot of claypot rice lies in control of the heat, which can only be managed manually. Other than Lam himself, only one other staff, Yeung Kong, has complete mastery of said skill. Lam hired chef Yeung from Kwan Kee, and the latter has over two decades of experience in cooking claypot rice. The two chefs work together in the kitchen with visible chemistry. 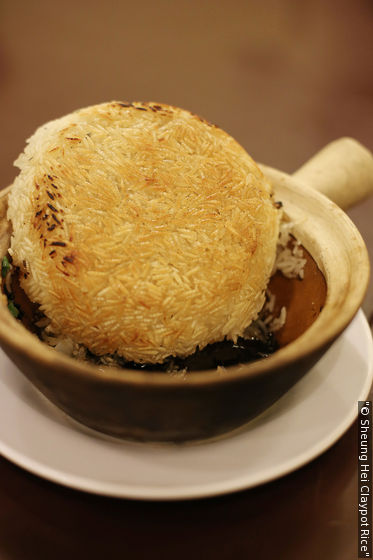 At Sheung Hei, the pots of steaming hot rice are prepared by first adding lard into Thai Indica rice to enhance its flavour. The rice is then cooked on high heat. Excess water is removed in the process to ensure the rice is al dente as well as to prevent the grains from sticking to one another.

The claypot is then placed atop the grill for approximately 15 minutes before the remaining ingredients are added. The pot then has to be spun every now and then to ensure even heat distribution. Ingredients such as eel, frog, beef and spareribs are all purchased on the same day they are used to ensure their freshness. To further enhance the dish, the soy sauce that is used in the dish is made in-house using a secret recipe that was concocted by both chefs. Sautéed preserved meat is added to the soy sauce to add depth of flavour and heighten its aroma.

The duo’s high standards and attention to detail can also been observed in the side dishes they offer.

To prepare their signature King Of The Stir-Fry, a side dish that pairs superbly with claypot rice, Lam only uses locally produced dried shrimps, dried anchovies and cashew nuts. Each new batch is sautéed daily. For his Sweet And Sour Meatballs, a dish which Lam takes great pride in, Lam draws inspiration from the classic Cantonese sweet and sour pork, but uses chicken and prawns as a substitute for pork. The side dishes are extremely popular and almost every table can be seen with a dish or two.

According to Lam, gaining the Bib Gourmand recognition from MICHELIN is an "extraordinary achievement" that brings him great excitement: “Most of our customers in the past were residents of the area. After being selected by Bib Gourmand, we see an increase in tourists and people from other neighbourhoods in Hong Kong come to try our food. Getting recognised by more people for the quality of our food has given me a greater sense of achievement than before.”

This article was written by Joe Chan and translated by Tang Jie. Click here to read the original story.