Koreans have a reputation for their love of grilling – beef, pork, chicken, offal, seafood, you name it. In fact, together with kimchi, K-barbecue is one of Korea’s biggest culinary exports to the world; I mean, what is there not to love about grilling pre-sliced cuts of meat, tableside, while digging into a mind-boggling array of complimentary banchan and a pile of crisp green leaves to wrap the cooked meat in, all of which are refilled, free of charge, as many times as you desire?

Foreigners are often surprised when told that veganism not only exists in Korea, but it has been around for close to two thousand years, deeply rooted in the history of Korean Buddhism. Interestingly, this unique culinary heritage, which had been more or less unknown outside of Korea until recently, has become more relevant now than ever before, especially with the world’s growing obsession with health, nutrition and plant-based foods.

Last month, Balwoo Gongyang became the first Korean-style temple food restaurant in the world to receive a Michelin star. Run by the Jogye Order of Korean Buddhism, the restaurant has been offering simple yet exquisite monastic dining since it opened its doors in 2009. The response to its food–especially after it revamped its menu earlier this year–has been nothing but favorable. Foreigners account for more than 30% of its clientele; the restaurant currently offers menus in four different languages.

Of the 24 restaurants that received one, two or three Michelin stars in the 2017 Seoul guide, Balwoo Gongyang is one of the two with women at the helm. Chef Kim Ji Young tells all in the following interview.

How do you feel about Balwoo Gongyang receiving a Michelin star in the 2017 Michelin Guide Seoul?

It’s such an honor. I hope this occasion leads to increased exposure of temple food and Korean cuisine to people around the world.

When did you start cooking?

I started late in my late 20s. My mother is trained in classic Korean cuisine, so I’ve been influenced from a young age. My journey in cooking started with learning how to make elaborate ceremonial food for traditional weddings from my mother. I went on to study Korean royal court cuisine, noble cuisine, Western cuisine and Asian cuisine.

Some of the biggest key words in food right now are “nutrition” and “sustainability.” Vegetarianism and veganism are going mainstream. Balwoo Gongyang is now one of the few vegan restaurants in the world with a Michelin star. Reflecting on these current trends, how realistic do you think it is for Korean temple food to go global?

Very. Temple cuisine is completely vegan and it prohibits the use of five aromatic ingredients which include green onions, garlic, Chinese chives, wild chives and Chinese squill. Garlic and green onions constitute the backbone of Korean cuisine – we can’t discuss Korean food without the two. However, foreigners who are unfamiliar with the typical flavor profile of Korean cuisine may find the food overly pungent and harsh precisely because of their b presence. That is why I believe temple food can be a more approachable version of Korean cuisine for the uninitiated and, according to my sommelier friend based in Paris, easier to pair with wine.

Where did you train?

I trained under the Venerable Seon Jae of the Jogye Order who is one of the leading masters of temple food. I was in my late 20s, had just started cooking professionally, and I wanted to learn her food. She taught me the philosophy of temple food and it resonated with me deeply. But I was too young. Temple food wasn’t “showy” enough for me and I left in search of something more “fancy.”

Then, in 2012, I had the opportunity to work as a chef at the Korean Pavilion at the Terra Madre Salone del Gusto, an annual slow food festival hosted by the city of Turin in Italy. The Venerable Seon Jae also happened to be in town to take part in a food event. At the time, I was really into the whole slow food movement. The stars aligned and I decided to study temple food again – more in depth this time.

What made you change your mind?

By 2012, I’d been cooking for more than a decade and I still had questions about my profession that were unanswered. For instance, my job as a chef was to cook tasty food but also nourishing food. But there were times when I needed to use certain “unhealthy” ingredients to make food taste better or look prettier. That was an issue I’d always had with being a chef. When I returned to temple food, any skepticism I’d previously had disappeared. The basic principles of temple cuisine corresponded with my philosophy of cooking and food. I fell in love. 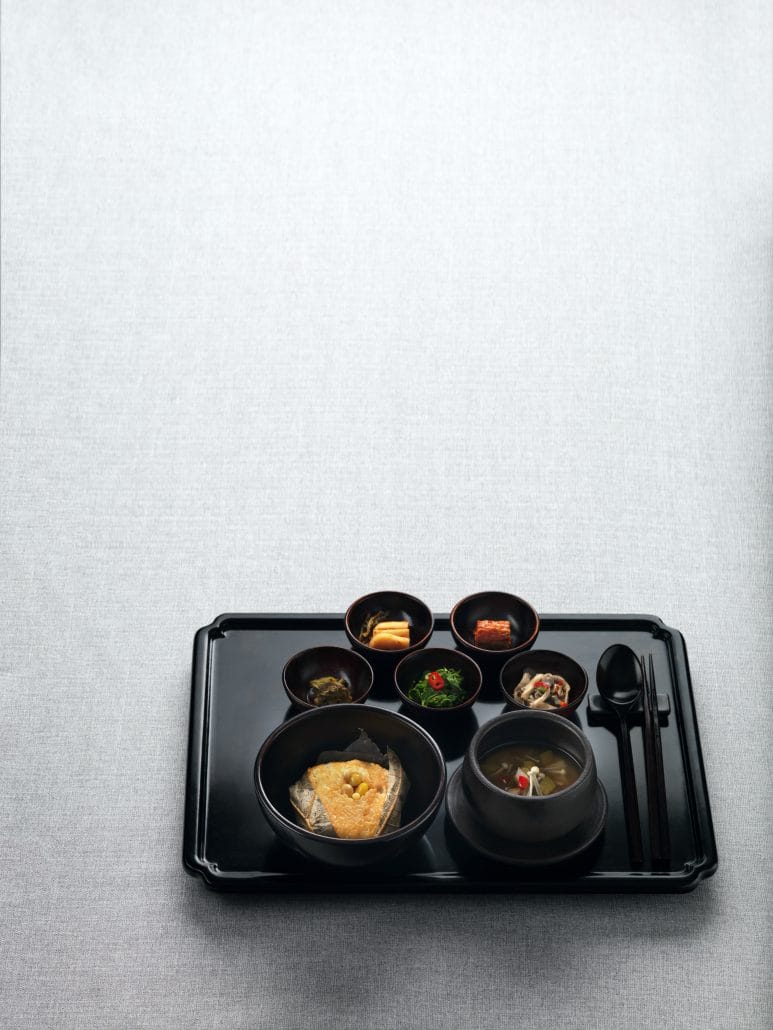 What is the key philosophy of temple food?

Temple food is not about adding; it’s about subtracting. The taste of a dish should not be amplified by adding more things to it. The key is to use the bare minimum ingredients to maximize the integrity of the dish. One has to understand this fundamental principle and be able to put it into practice when cooking.

Why is ‘Osinchae’ (five aromatic vegetables) prohibited in temple food?

They have a pungent aroma and a poignant flavor believed to disrupt one’s peace of mind which is crucial to the practice of asceticism.

Of the five, Chinese squill is one ingredient that doesn’t grow in Korea. Instead, onion is banned. Ingredients such as dashima (kombu), perilla seeds, Korean mint (blue liquorice), Korean pepper powder and mushrooms are used as flavor substitutes.

The most common misconception Koreans have about temple food is that it is bland and lacks flavor due to the omission of the five aromatic vegetables and animal protein.

Many assume that kimchi made without green onions, garlic and fermented fish sauce will lack flavor. They are wrong; kimchi without those ordinarily essential ingredients have a mild yet distinctively refreshing flavor. Many people who try our kimchi for the first time are amazed by the depth of flavor. Kimchi doesn’t necessarily have to be spicy and b. 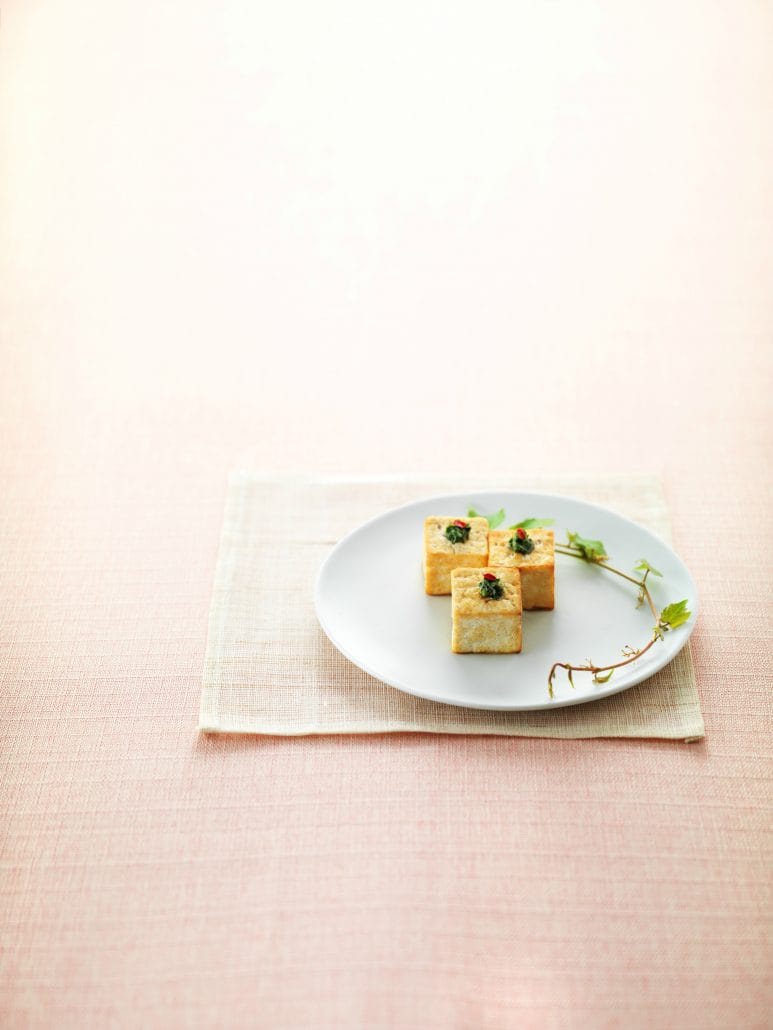 What are some of the most commonly used ingredients at the restaurant?

Temple food requires only a handful of seasonings and sauces. They include ganjang (soy sauce), doenjang (fermented soybean paste) and gochujang (fermented chili paste) made at a temple. Instead of sugar, we use jocheong–a traditional dark syrup made with fermented rice—which also helps with digestion. Sesame oil and perilla seed oil are staples in the temple pantry.

There are also some not-so-mainstream ingredients commonly used in temple cuisine such as jepi (Korean pepper) and sancho (Sichuan pepper). These two ingredients have a high energy index. Say, for example, the energy index of white rice is 100; brown rice contains 400 while jepi and sancho each contain 4,000. Before chili peppers were introduced, Koreans used to add jepi powder to kimchi for that distinctive kick.

Seasonality is everything in temple cuisine.

That’s right. Because everything is plant-based, the seasonality of ingredients is crucial. At Balwoo Gongyang, we change our menu every three months. We source most of our ingredients—prepared and fresh—from different temples around the country. For instance, the tofu we use is delivered daily via the KTX high-speed train from Tongdosa Temple (Gyeongsangnamdo Province). The Venerable Jeong Kwan at Baekyangsa Temple (Jeollanamdo Province) sends us her jangajji which are pickled vegetables. We make our ganjang-cha (soy sauce tea) with a 20-year-old soy sauce made by the Venerable Seon Jae. Much of the fresh produce we use is harvested at the different temples as well. 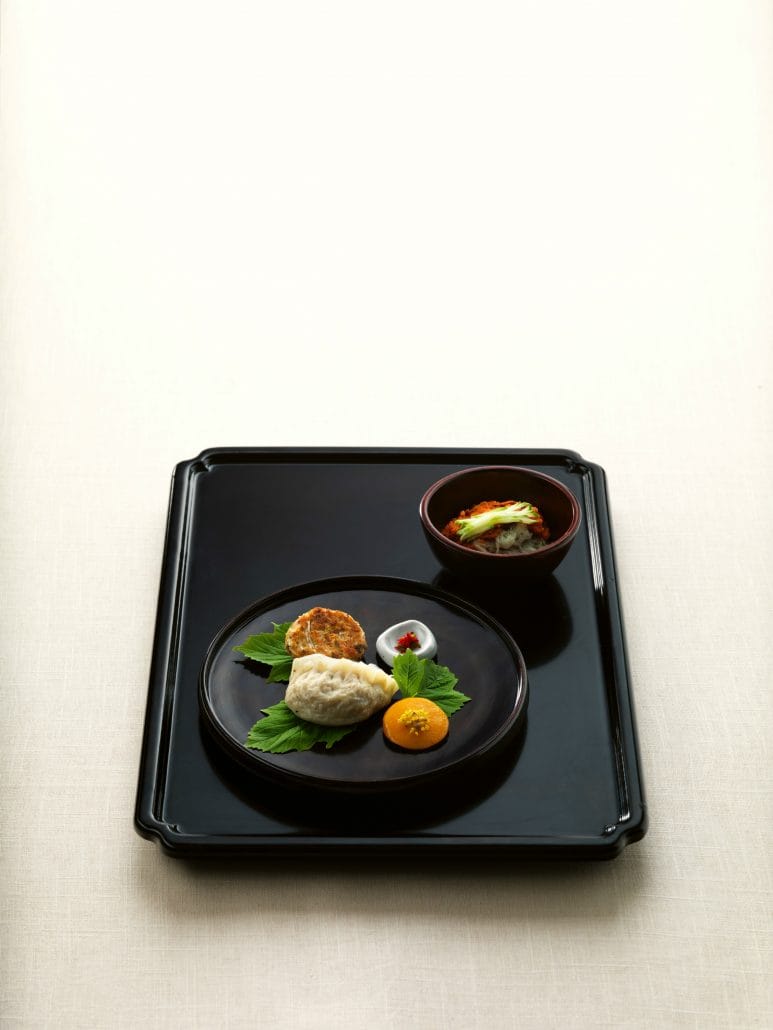 The restaurant offers a good variety of tasting menus. Tell us about it.

Because of the nature of temple cuisine, our tasting menus are not what you would expect at a typical Korean restaurant. À la carte doesn’t work with temple cuisine either. What we have done is to create several tasting menus so that our clients can enjoy the very best of what each season at the temple has to offer. The response has been very positive.

Who comes to the restaurant?

The older generation with a nostalgia for this kind of food – agrarian, honest and simple. People who frequent the restaurant are also health-conscious folks. 30% of our clientele are foreigners, many of whom come with a prior knowledge of what we do. Many Koreans bring their friends visiting from overseas. It’s a good mix.

Which menu do you recommend?

I would recommend the seven-course ‘Heesik.’ It’s quite special. When you picture a typical Korean course menu, certain dishes immediately come to mind such as gujeolpan—small wheat flour crepes served with eight different accompaniments—and sinseollo, a royal hot pot dish. However, the components of our ‘Heesik’ menu are completely unpredictable.

We try to showcase as many ingredients as possible that are unique to temple cuisine. I have seen the look of pure bewilderment on our clients’ faces as they are served. They come expecting to eat some type of porridge as a starter, which is often the case in a typical Korean meal. So, imagine their surprise when they are served ‘Sumusal Ganjang,’ a type of tea made with 20-year-old soy sauce! Nothing is conventional here. I highly recommend this course to those who have a deep passion for food.

You need to have a peace of mind. Stop looking for too many elements to work with. I am able to appreciate the beauty of temple food because I have experienced other genres of food as well. It’s kind of like not being able to truly appreciate home until you leave it. It’s okay to experiment with different styles of cooking then return to temple food when you are ready. It won’t be too late.

In terms of technique, temple food is relatively simple. We don’t handle meat or fish. Handling vegetables properly requires expertise, too, but relatively speaking, temple cuisine requires less technical prowess. However, it is crucial that you understand the unique philosophy of temple food in order to cook it properly, wholeheartedly.

Kim Sung Il didn’t start his career the way many chefs these days do; becoming a chef had never been his career aspiration. Rather, his path to chefdom...

There is so much more to hansik than bibimbap and barbecue, and a new generation of dynamic Korean chefs are flying the flag for contemporary Korean gastronomy...

There is a saying in Korean that goes, “Even Geumgangsan Mountain is better appreciated with a full stomach.” The majestic mountain mentioned in this age-old...