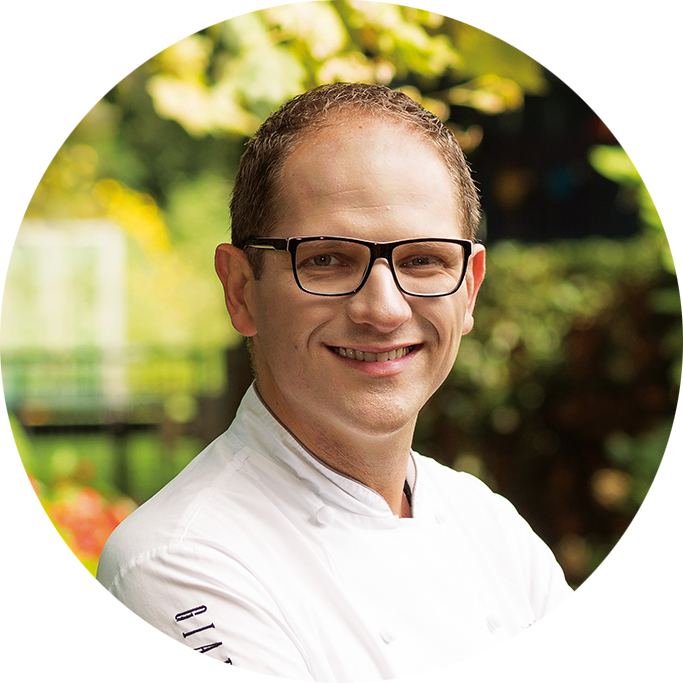 About the Chef:
German-born Fliegauf won his first Michelin star in 2007 at the age of 26, only six months after opening Ecco. The second star came in 2010. Then, in 2011, he opened Ecco in St Moritz, to which Michelin saw fit to award two stars the following year, making him the youngest and only chef in Switzerland with a total of four Michelin stars to his name. Recently, his third restaurant (ECCO Zurich) had been awarderd its second star. Fliegauf draws inspiration from the area around Ascona, in particular the herbs and small-leaf salads that are grown especially for him.
One of Switzerland’s 26 cantons, Ascona is located in the Ticino region, which is split into craggy mountain valleys and sherbet-coloured lakeside resorts such as Lugano, Locarno and Ascona. The local cuisine is something of a hybrid, too: slow-cooked polenta flecked with buckwheat; a funky, offal-rich sausage called codighe; marinated lake fish; braised goat; rabbit stew; pumpkin soup; risotto; and chestnuts — lots of chestnuts. Fliegauf’s food is not remotely as hearty, but he certainly plays with such ingredients.
All charges are in ​US Dollars. All transactions are subject to charges, conversions and fees imposed by your card issuing bank. The local currency rate indicated is accurate at the time of publishing.

Dress Code: Smart Casual
Ticket sales start from 14 August 2017
About the series:
The International Chef Showcase is a prestigious event that brings top guest chefs from Michelin-starred restaurants around the world to restaurants in Hong Kong and Macau so diners here get to experience some of the world’s best cuisines without having to travel. It is organised as part of the partnership between esteemed wine publisher Robert Parker Wine Advocate and Michelin, and brings together the most sought-after wines with exquisite culinary creations by the critically acclaimed chefs.

The dinner session on 20 Sep 2017 is EXCLUSIVELY reserved for privileged customers of 1O1O, the Official Mobile Network Provider for the Michelin Guide Hong Kong Macao 2017.